Indoor air quality problems are usually revealed by occupants’ complaints. In this study, the odors of two types of hardwood species, namely, Cathy poplar (Populus cathayana Rehd.) and rubberwood (Hevea brasiliensis) were selected and extracted with ethanol-toluene for removal of extractives in an attempt to eliminate the odors. The odorous components of neat and extracted woods were identified by gas chromatography-mass spectrometry/olfactometry (GC-MS/O). The results showed that about 33 kinds of key volatile compounds (peak area above 0.2%) were detected from the GC-MS, and about 40 kinds of odorants were identified from GC-O. The components were concentrated between 15 and 33 min in GC-O, which was different from the concentration time in GC-MS. Lots of the odors identified from GC-O were unpleasant to humans, and variously described as stinky, burnt, leather, bug, herb, etc. These odors may originate from the thermos-oxidation of wood components. After extraction, the amounts and intensities of some odorants decreased, while some remained. However, the extraction process resulted in a benzene residue and led to increased benzene odor. View Full-Text
Keywords: wood; odor; volatile organic compounds; gas chromatography-olfactometry wood; odor; volatile organic compounds; gas chromatography-olfactometry
►▼ Show Figures 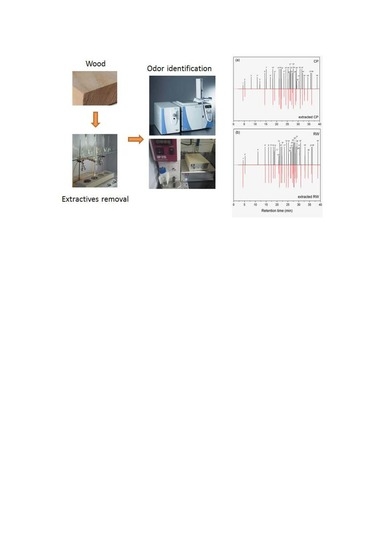