An Efficient Synthesis of Spiro[indoline-3,9′-xanthene]trione Derivatives Catalyzed by Magnesium Perchlorate
Next Article in Special Issue

Cancer is a major public health problem worldwide and it still represents the second leading cause of death [1]. Cancer rates could further increase by 50% to 15 million new cases by 2020, according to the World Cancer Report, the most comprehensive global examination of the disease to date [2]. It has been reported that more than 30% of human cancers could be prevented by an alternative strategy of appropriate dietary modification [3,4]. Therefore, attention is being focused on prevention as an ultimate strategy for the management of cancer [5,6]. In recent years, many studies have been carried out to investigate the potential cancer chemopreventive activities of natural phytochemicals, in particular dietary polyphenols [7].
Tocotrienols and tocopherols are two subgroups of vitamin E, each composed of four different isomers: alpha, beta, gamma and delta [8]. The basic chemical structures of tocopherols and tocotrienols include an aromatic chromanol ring and an isoprenoid chain, with tocotrienols containing three unsaturated phytyl side chains [9]. Barley, rice bran and palm oil have been reported to be rich in tocotrienol. The distribution of tocopherols in the plant kingdom is primarily α-tocopherol in green leafy plants and γ-tocopherol in non-green plant parts such as fruits and seeds [10]. Previous studies showed that tocotrienols exert more significant neuroprotective, anti-oxidant, anti-cancer and cholesterol-lowering properties than tocopherol [11,12,13]. Particularly, γ-tocotrienol is one of the most abundant forms of tocotrienol in foods, and has shown significant anticancer activity [14,15,16,17,18]. γ-Tocotrienol displays potent anticancer activity at treatment doses that have little or no effect on normal cell growth and viability [19,20].
In previous studies, data demonstrated that γ-tocotrienol inhibited the growth of breast [18,21,22], glioma [23], colon [24,25], prostate [26,27], liver [28], oral cavity [29], and gastric cancer cells [30,31] in a dose-dependent manner, and altered the expression of proteins to induce apoptosis of cancer cells. It was also reported that γ-tocotrienol displayed an anticancer effect against human cervical cancer cell lines [32,33]. γ-Ttocotrienol-inhibited proliferation in human cervical cancer cells through the upregulation of IL-6 and the down-regulation of cyclin D3, p16, and CDK6 expression in the cell cycle signaling pathway has been reported [32]. However, the effect of γ-tocotrienol on the proliferation inhibition and apoptosis induction in human cervical cancer HeLa cells and its mechanisms are still not fully understood. The objectives of this study were to evaluate the effects of γ-tocotrienol on proliferation and apoptosis in HeLa cells and to decipher the underlying molecular mechanism.

2.1. Effect of γ-Tocotrienol on the Viability of HeLa Cells

2.2. Effect of γ-Tocotrienol on Mitotic Index of HeLa Cells

2.3. Effect of γ-Tocotrienol on Colony Formation in HeLa Cells

To investigate whether γ-tocotrienol-mediated growth inhibition is associated with apoptosis, treated and untreated HeLa cells were analyzed by flow cytometry. As shown in Figure 3, the apoptosis rates of HeLa cells treated with 30, 45 and 60 μM of γ-tocotrienol was 5.91–24.67% at 12 h and 15.87–36.92% at 24 h, respectively. The number of apoptotic cells in 15 μM γ-tocotrienol treatment group, solvent group was nearly the same as that of control group. In addition, DAPI staining was used to investigate the morphological changes of the cell nuclei and the results are presented in Figure 4. Control cells showed homogeneous staining of the nucleus, but, after treatment with 30 and 60 μM of γ-tocotrienol for 12, 24 and 48 h, apoptotic cells had irregularly stained nuclei indicative of chromatin condensation and nuclear fragmentation. No significant change was observed in HeLa cells treated with 15 μM of γ-tocotrienol. The ultrastructural changes are characteristic of apoptosis and further details are shown in Figure 5. The cells treated with 60 μM γ-tocotrienol for 12 and 24 h showed obvious characteristic changes of apoptosis, including cytoskeletal disruption, chromatin condensation and margination of nucleus, formation of apoptotic bodies and mitochondrial swelling, or disappearance of mitochondria (Figure 5C,D). Similarly, the characteristic morphology of apoptosis was also observed in those cells treated with 30 μM of γ-tocotrienol for 48 h (Figure 5B). In addition, cells in the control group had the clear cell organs in cytoplasm, and mitochondrial cristae were also observed clearly (Figure 5A). These data demonstrated that γ-tocotrienol significantly induced apoptosis in HeLa cells in a time- and dose-dependent manner.

2.7. Effect of γ-Tocotrienol on the Expression of Proteins Involved in Proliferation in HeLa Cells

2.8. Effect of γ-Tocotrienol on the Expression of Apoptosis-Related Proteins in HeLa Cells

2.9. Apoptosis of HeLa Cells Induced by γ-Tocotrienol via Mitochondrial Pathway

The effect of γ-tocotrienol on cell viability was determined by an MTT assay. Briefly, exponentially growing cells were seeded in 24-well plates (Nunc, Wiesbaden, Germany) at 2.0 × 104 cells/well. After 24 h of incubation, the medium was removed and the cells were treated with 1000 μL of medium containing various concentrations (15, 30, 45, and 60 μM) of γ-tocotrienol for the desired time. Negative control cells were supplemented with 0.15% ethanol vehicle. Each concentration of γ-tocotrienol was repeated in three wells. 100 μL of MTT (5 mg/mL in PBS) (Gibco, Rockville, MD, USA) was added to each well and incubated at 37 °C for 4 h. The medium was carefully removed and 750 μL of dimethyl sulfoxide (DMSO) was added to each well. The plates were shaken for 10 min and the absorbance at 490 nm was measured in an 550 Universal microplate reader (Bio-Tek Instruments, Inc., Winooski, VT, USA). Growth inhibition by γ-tocotrienol was calculated as percentage of cell viability, taking the viability of the blank control cells as 100%.

Exponentially growing HeLa cells were seeded in 24-well plates at 1.0 × 104 cells/well and incubated for 24 h to allow the cells to attach the bottom of plate, and then the medium was removed and the cells were treated with 15, 30, 45, and 60 μM of γ-tocotrienol for 12, 24 and 48 h. Each concentration of γ-tocotrienol was repeated in three wells. After incubation, the cells were fixed with methanol and stained with 1% Giemsa. The number of cells in mitosis was counted among 1000 cells under an inverted microscope (Olympus CK40, Tokyo, Japan). The mitotic index was calculated using the following Equation (1):
mitotic index = number of mitotic cells/total number of cells × 100%

Exponentially growing cells were plated at 200 cells/well in 24-well plates and allowed to attach for 24 h. The medium was removed and the cells were treated with 15, 30, 45 and 60 μM of γ-tocotrienol. Each concentration of γ-tocotrienol was repeated in three wells. After 12, 24 or 48 h of incubation, the cells were fixed with methanol and stained with Giemsa. Colonies containing more than 50 cells originating from single cells were counted under the inverted microscope (Olympus CK40).

Exponentially growing HeLa cells were plated at a density of 5.5 × 105 cells per 100-mm culture dish for 24 h. The medium was removed and the cells were treated with 15, 30, 45 and 60 μM of γ-tocotrienol for 12 and 24 h, then harvested and washed twice with PBS. The cells were then resuspended in 150 μL PBS and fixed in 85% ice-cold ethanol for 2 h at 4 °C. They were then centrifuged at 1000 rpm for 5 min and resuspended with PBS, repeated twice. Finally, each samples added 0.5 mL PI (5 μg/mL), maintained at 37 °C in a humidified incubator for 30 min. Data acquisition was done on a Guava easyCyte Flow Cytometer (Guava Technologies, Billerica, MA, USA) and analyzed by Modfit L T software (Verity Software House Inc., Topsham, ME, USA).

After treatment with γ-tocotrienol, morphologic changes in HeLa cells were assessed by inverted microscope, fluorescence microscopy and transmission electron microscopy. Briefly, the cells were treated with 15, 30, 45 and 60 μM of γ-tocotrienol for 12, 24 and 48 h and observed under inverted microscopy. Changes in the nuclei were investigated by staining the cells with fluorescent DNA-binding dyes (DAPI). Cells were harvested and washed twice with PBS, and 25 μL of cell suspension was mixed with 1 μL of dyeing solution (4′,6-diamidino-2-phenylindole, DAPI). Nuclear morphology was assessed by fluorescence microscopy (Olympus IX70, Tokyo, Japan). For transmission electron microscopy, the cells were harvested and fixed with 600 μL glutaraldehyde, the pellets were dehydrated in graded ethanol solutions and embedded in Epon 812. Ultrathin sections of pellet were counterstained with uranyl acetate and lead citrate and observed under a JEM-1220 transmission electron microscope (JEOL Ltd., Tokyo, Japan).

The agarose gel electrophoresis method described previously was modified to determine DNA fragmentation [57,58]. Briefly, HeLa cells were treated with 15, 30, 45 and 60 μM of γ-tocotrienol for 12, 24 and 48 h, and then washed twice with PBS. Total DNA was isolated using a Apoptotic DNA Ladder Kit (Applygen Technologies Inc., Beijing, China). DNA agarose electrophoresis was executed at 60 V on a 1.2% agarose gel. Loading was conducted with 5 μL samples with 1 μL 6× sample buffer, and 5 μL DNA marker. The gel was photographed under ultraviolet illumination.

The HeLa cells were treated with various concentrations of γ-tocotrienol for 12 h and then collected, washed twice with PBS, and detached in PBS containing 0.25% pancreatin. Whole-cell lysates obtained from the different treatment groups were isolated by lysing in 20 mM Tris-HCl, pH 7.5, 2% SDS (w/v), 2 mM benzamidine, 0.2 mM phenyl-methane-sulphonyl fluoride. Preparation of mitochondrial and cytosolic fractions was conducted as previously described [18]. The total protein concentrations of each sample were measured in a 550 Universal microplate reader (Bio-Tek Instruments, Inc.) at 562 nm. For western blotting, 100 μg of protein was resolved on 10% polyacrylamide gels and transferred to a nitrocellulose membrane. The membrane was blocked in blocking buffer (1% BSA, 1% Tween 20 in 20 mM Tris-buffered saline (TBS), pH 7.6) for 30 min at 37 °C in a hybridization oven, incubated with appropriate monoclonal or polyclonal primary antibody in blocking buffer for 2 h at 37 °C or overnight at 4 °C. The membrane was washed 3 × 5 times with Tris-buffered saline tween-20 (TBST) followed by incubation with anti-mouse or anti-rabbit secondary antibody at 37 °C for 1 h. The membrane was washed 3 × 5 times with TBST and then washed with TBS twice. Then the membrane was incubated with alkaline phosphatase until an appropriate signal level was obtained. Protein bands were detected by FluorChem Imaging Systems (Bio-Rad, Hercules, CA, USA).

Statistical analysis was performed using SPSS version 14.0 (SPSS, Inc., Chicago, IL, USA). The data were expressed as Mean ± SD. Differences between the control and treated groups were evaluated by the one-way analysis of variance (ANOVA) test with the Bonferroni post hoc multiple comparisons and considered significant at p < 0.05.

This project was supported by the National Natural Science Foundation of China (No. 31501481).

Authors declare that there are no conflicts of interest. 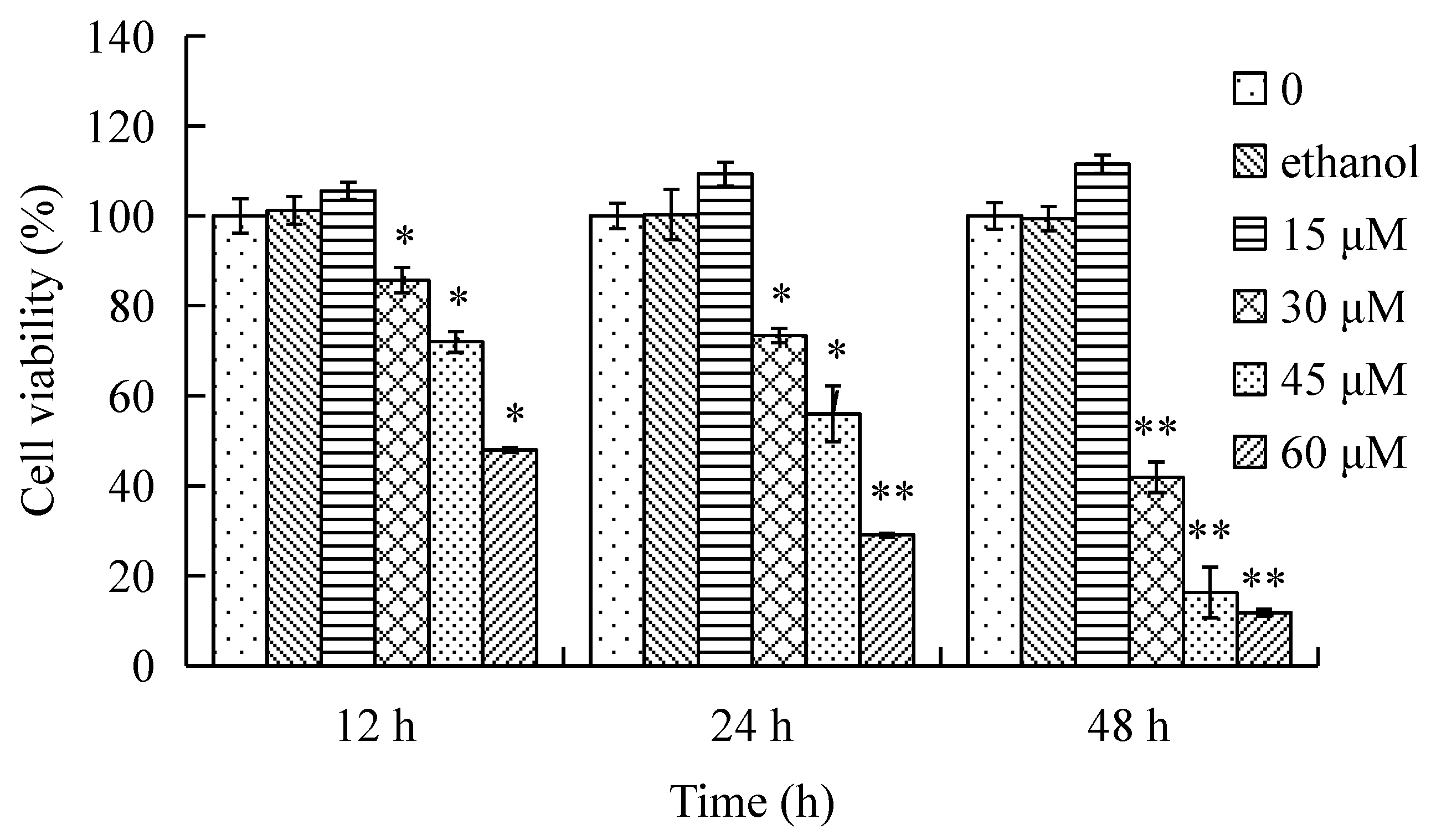 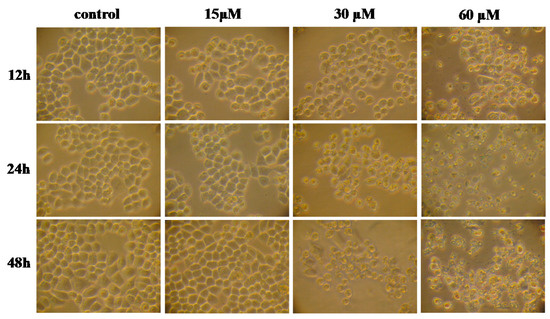 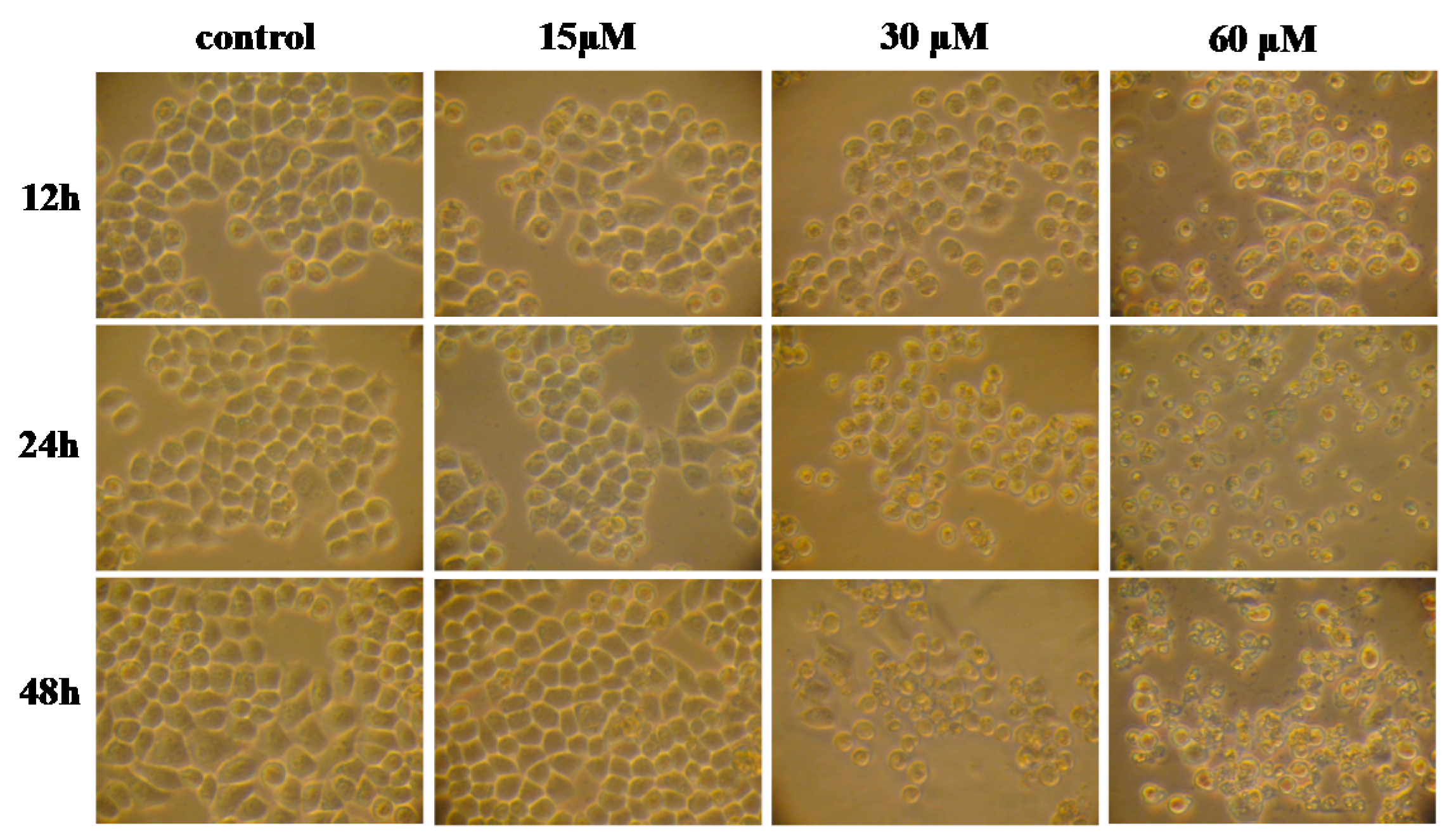 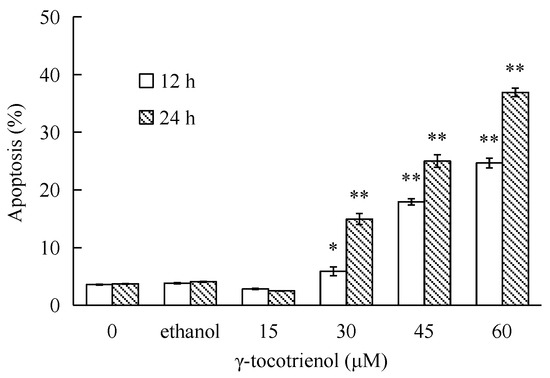 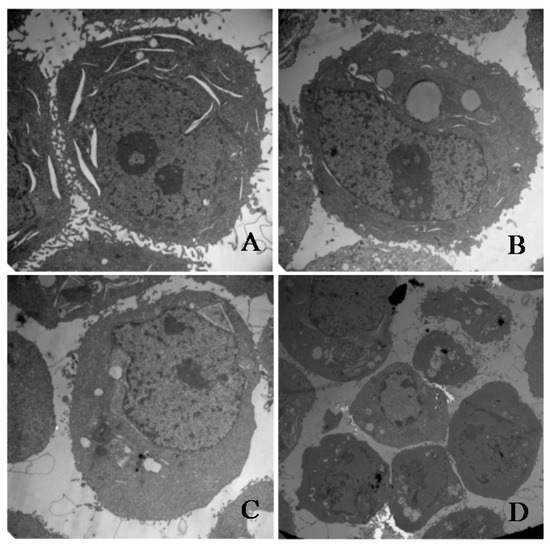 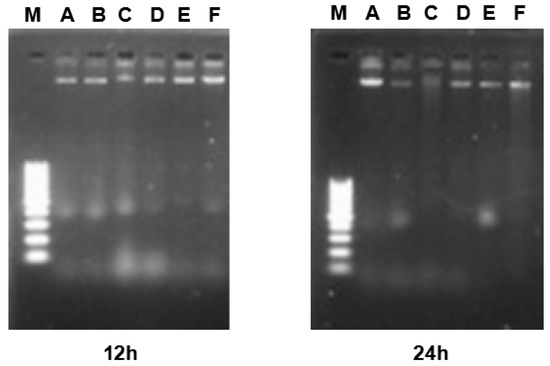 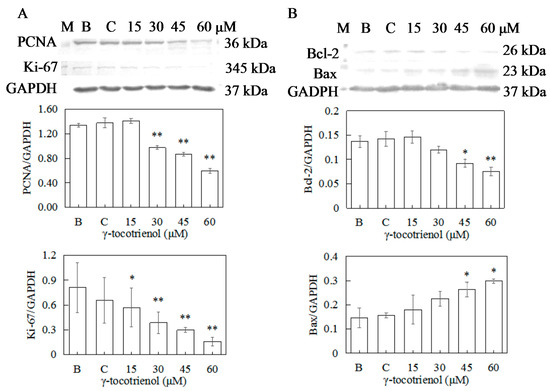