Many natural flavonoids have anti-cancer effects. Fisetin (3′,4′,7-tetrahydroxyflavone) is one of these natural compounds, found in fruits and vegetables such as strawberries, apples, cucumbers, and onions [1]. Fisetin has multiple biological effects, such as anti-proliferation [2,3] and anti-inflammation activities [4,5]. Additionally, fisetin has anti-cancer effects in several types of cancer cells [3,6,7]. For example, fisetin induces apoptosis via inhibition of the MAPK signaling pathway in human non-small cell lung cancer [7] and reactive oxygen species (ROS) production in human oral cancer cells [8]. Furthermore, fisetin has a sensitizing effect in anti-cancer therapy. Combined treatment with fisetin and cabazitaxol has been shown to induce apoptosis [9]. Additionally, treatment with fisetin enhanced tumor necrosis factor-related apoptosis-inducing ligand (TRAIL)-mediated apoptosis in cancer cells [10]. However, the molecular mechanism of this anti-cancer effect by fisetin is not well understood.
Apoptosis signaling is mainly divided into two pathways: the intrinsic and the extrinsic pathway. The intrinsic pathway is activated from within the cell, with the Bcl-2 family of proteins playing a critical role on apoptosis. In contrast, the extrinsic pathway is activated from outside of the cell with the binding of a ligand to death receptors (DRs) on the membrane, creating a critical event. These TRAILs bind to their receptor (DR4 or DR5), and recruit caspase-8 into a death-inducing signaling complex (DISC). Activation of caspase-8 induces apoptosis. DR4 or DR5-mediated apoptosis is modulated by two main steps: up-regulation of DR expression and expression of DRs on the cell membrane. First, up-regulation of DR expression at the transcription level plays a critical role on apoptosis. The promoter for the DR4 and DR5 genes contains binding elements for transcription factors, including activator protein (AP) 1 [11], p53 [12,13], C/EBP homologous protein (CHOP) [14], and nuclear factor-κB (NF-κB) [15]. Second, the surface expression of DRs on the cell plasma membrane also modulates apoptosis. In some cancer cells, DRs remain within autophagosomes, nuclei, nuclear membranes, or the endoplasmic reticulum (ER), resulting in down-regulation of DR expression on the cell surface, leading to drug resistance [16,17,18,19,20]. The presentation of DRs on the cell surface overcomes drug resistance.
Renal cell carcinoma is the most common form of kidney cancer, and is one of the drug-resistant malignancies in humans, which is a frequent cause of cancer mortality [21]. Therefore, there is a necessity for the development of novel therapeutic strategies against this type of cancer. In our study, we examined the effects of fisetin on apoptosis, and investigated the molecular mechanism in fisetin-induced apoptosis in renal cancer cells.

Caspase activation plays a critical role in apoptosis. As such, we investigated whether fisetin-induced apoptosis is dependent upon the activation of caspase. Fisetin markedly increased caspase activation (Figure 2A). Moreover, z-VAD-fmk, a pan-caspase inhibitor, completely blocked fisetin-induced sub-G1 population and PARP cleavage (Figure 2B). This data suggested that fisetin induced caspase-mediated apoptosis. Next, to identify the molecular mechanism of fisetin-induced apoptosis, we examined the expression of apoptosis-related proteins.
As shown in Figure 2C, the expression levels of Fas, c-FLIP, FADD, Bcl-2, Bcl-xL, and PUMA did not change with fisetin treatment (Figure 2C). However, fisetin induced up-regulation of death receptor DR4 and DR5 expression in a dose-dependent manner (Figure 2C).

2.4. Endoplasmic Reticulum Stress Has No Effect on Fisetin-Induced DR5 Expression

Transcriptional regulation of DR5 is mediated by several transcriptional factors. Among them, CCAAT-enhancer-binding protein homologous protein (CHOP) is one of candidates, which modulate DR5 expression [14]. Kang et al. have reported that fisetin induced apoptosis in human non-small cell lung cancer via induction of endoplasmic reticulum (ER) stress [7]. Therefore, we investigated whether fisetin induced ER stress response in human renal carcinoma Caki cells. Fisetin induced expression of ER stress-related proteins, including CHOP and activating transcription factor (ATF4) (Figure 4A). In addition, fisetin also increased the spliced form of the X-box binding protein (XBP)-1 mRNA (Figure 4B).
Next, we examined whether fisetin-induced CHOP expression is involved in DR5 expression. As shown in Figure 4B, we mutated the potential CHOP site (−276 to −263) of the DR5 promoter gene followed by the transfection of Caki cells with either the DR5 promoter (pDR5/605) or mutated CHOP binding site (pDR5/605-mCHOP). The resulting promoter activities were analyzed by a luciferase assay in the presence or absence of fisetin. Fisetin markedly increased the two promoter activities for DR5 (Figure 4C). Furthermore, down-regulation of CHOP by siRNA did not change fisetin-induced DR5 expression (Figure 4D). Therefore, fisetin induced DR5 up-regulation in a CHOP-independent manner.

2.6. Fisetin-Induced Reactive Oxygen Species Production Has No Effect on Apoptosis

Reactive oxygen species (ROS) is one of the major signaling molecules known to induce apoptosis in cancer cells. Fisetin has been shown to induce ROS production in multiple myeloma, resulting in apoptosis [24]. Therefore, we examined the effect of ROS production on fisetin-induced apoptosis. Fisetin induced ROS production within 10 min, and then gradually decreased to basal levels (Figure 6A). However, ROS scavengers [N-acetylcystine (NAC) and glutathione ethyl ester (GEE)] had no effect on fisetin-induced induction of sub-G1 population and PARP cleavage (Figure 6B). Therefore, this data indicated that ROS signaling is not involved in fisetin-induced apoptosis. Taken together, our results demonstrate that fisetin induces apoptosis through p53-mediated up-regulation of DR5 expression in human renal carcinoma Caki cells.

For flow cytometry, the cells were resuspended in 100 μL of phosphate-buffered saline (PBS), and 200 μL of 95% ethanol was added while the cells were being vortexed. Next, the cells were incubated at 4 °C for 1 h, washed with PBS, resuspended in 250 μL of 1.12% sodium citrate buffer (pH 8.4) with 12.5 μg of RNase and incubated for an additional 30 min at 37 °C. The cellular DNA was then stained by adding 250 μL of a propidium iodide solution (50 μg/mL) to the cells for 30 min at room temperature. The stained cells were analyzed by fluorescent-activated cell sorting on a FACSCanto II flow cytometer (BD Biosciences, San Jose, CA, USA) to determine the relative DNA content, which was based on the red fluorescence intensity.

To examine cellular nuclei, the cells were fixed with 1% paraformaldehyde on glass slides for 30 min at room temperature. After fixation, the cells were washed with PBS and a 300 nM 4′,6′-diamidino-2-phenylindole solution (Roche, Mannheim, Germany) was added to the fixed cells for 5 min. After the nuclei were stained, the cells were examined by fluorescence microscopy.

The cell death detection ELISA plus kit (Boerhringer Mannheim; Indianapolis, IN, USA) was used to determine the level of apoptosis by detecting fragmented DNA within the nuclei of fisetin-treated cells. Each culture plate was centrifuged for 10 min at 200× g, the supernatant was removed, and the cell pellet was lysed for 30 min. Next, the plate was centrifuged again at 200× g for 10 min, and the supernatant that contained the cytoplasmic histone-associated DNA fragments was collected and incubated with an immobilized anti-histone antibody. The reaction products were incubated with a peroxidase substrate for 5 min and measured by spectrophotometry at 405 nm and 490 nm (reference wavelength) with a microplate reader. The signals in the wells containing the substrate alone were considered as background and were subtracted.

To evaluate DEVDase activity, cell lysates were prepared after their respective treatments with fisetin. Assays were performed in 96-well microtiter plates by incubating 20 μg of cell lysates in 100 μL of reaction buffer (1% NP-40, 20 mM Tris-HCl, pH 7.5, 137 mM NaCl, 10% glycerol) containing a caspase substrate [Asp-Glu-Val-Asp-chromophore-p-nitroanilide (DVAD-pNA)] at 5 μM. Lysates were incubated at 37 °C for 2 h. Thereafter, the absorbance was measured at 405 nm with a spectrophotometer.

Cells were detached with 0.5 mM EDTA, and washed three times with PBS wash buffer supplemented with 0.5% BSA. Cells (5 × 105). Cells were resuspended in 200 μL of PBS, and stained with primary antibody (1 μg/mL) and incubated for 30 min at 4 °C. Unreacted antibody was removed by washing the cells twice with the same PBS buffer. Cells were stained with the secondary antibody conjugated with fluorescein isothiocyanate (FITC) and incubated for 30 min at 4 °C. Unbound FITC-conjugated antibody was washed twice with PBS. Cells were resuspended in 200 μL of PBS. Cell-surface expression of DR5 receptor was determined by flow cytometry. Fluorescent intensity of the cells is directly proportional to the density of the present receptor.

The DR5, p53 and CHOP siRNA used in this study were purchased from Santa Cruz Biotechnology. The green fluorescent protein (GFP) (control) siRNA was purchased from Bioneer (Daejeon, Korea). Cells were transfected with siRNA using Oligofectamine Reagent (Invitrogen) according to the manufacturer’s recommendations.

Intracellular accumulation of ROS was determined using the fluorescent probes 2′,7′-dichlorodihydrofluorescein diacetate (H2DCFDA) and Mitosox Red. Caki cells were treated with fisetin, and then cells were stained with the H2DCFDA fluorescent dye or Mitosox Red for an additional 10 min. Cells were then trypsinized and resuspended in PBS, and fluorescence was measured at specific time intervals with a flow cytometer (Becton–Dickinson; Franklin Lakes, NJ, USA) or fluorescence microscopy (Zeiss, Jena, Germany).

The data was analyzed using a one-way ANOVA and post hoc comparisons (Student-Newman-Keuls) using the Statistical Package for Social Sciences 22.0 software (SPSS Inc.; Chicago, IL, USA). We determined the sample size on the basis of the smallest effect we wish to measure. 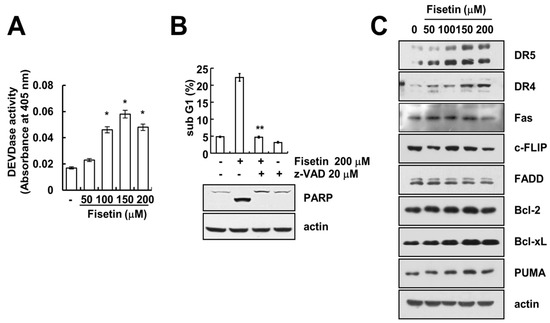 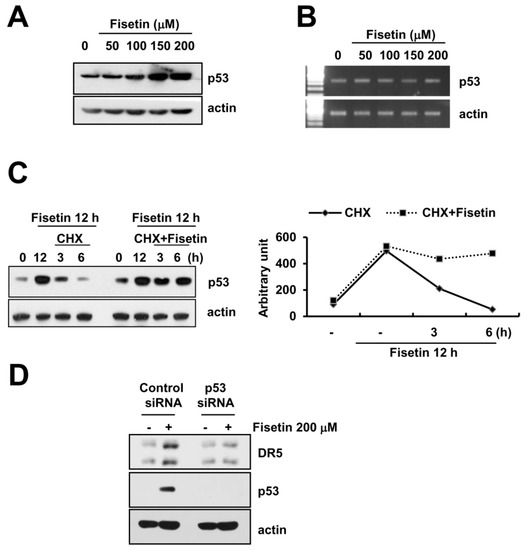 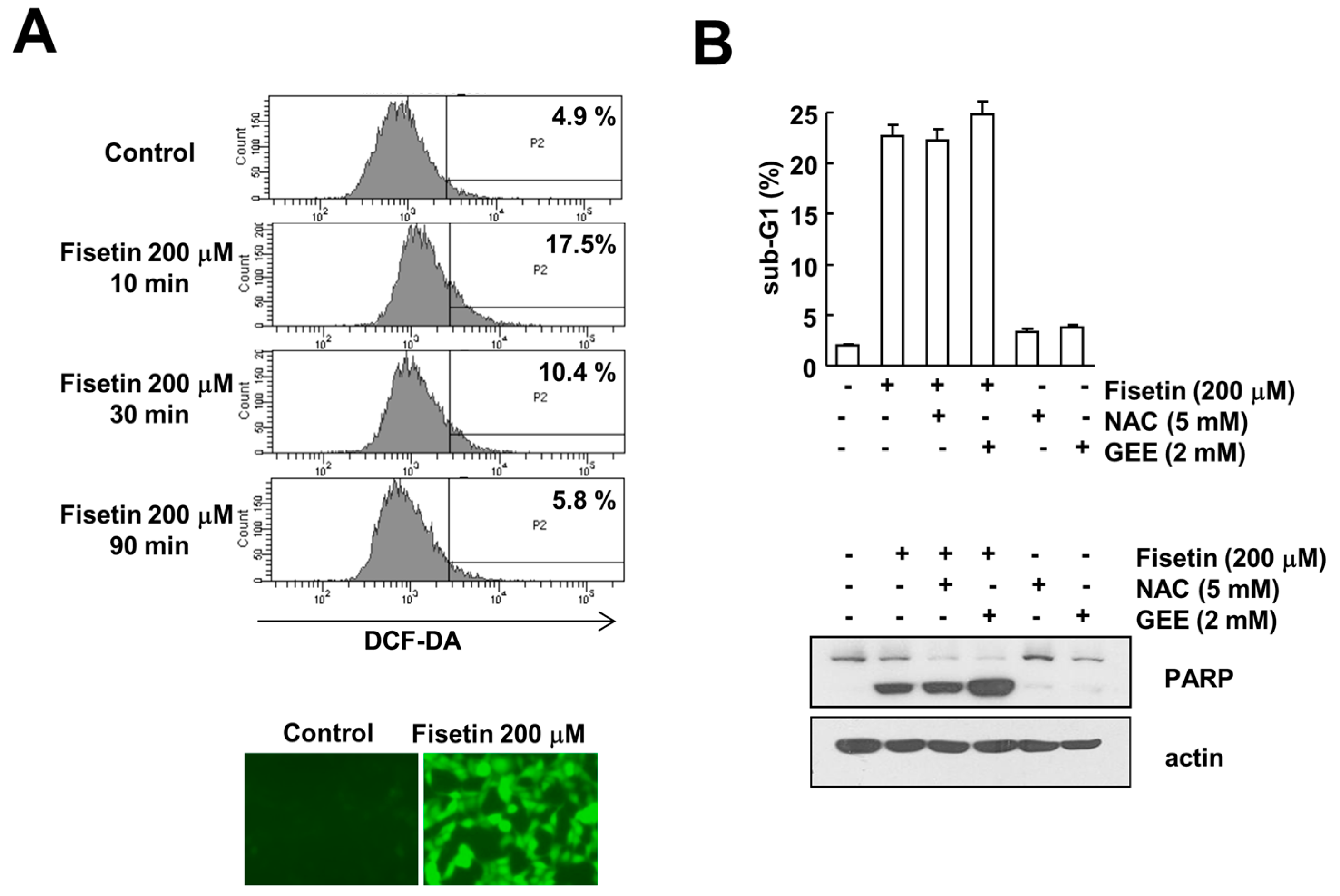