Protective Effects of Tormentic Acid, a Major Component of Suspension Cultures of Eriobotrya japonica Cells, on Acetaminophen-Induced Hepatotoxicity in Mice

Acetaminophen (APAP) is considered a safe and effective drug at therapeutic dosages and is commonly used as an antipyretic and analgesic agent [1]. However, an APAP overdose causes severe liver damage that has the potential to progress to liver failure, which accounts for nearly half of the liver failure cases in the USA and a significant portion of cases in Europe [2]. In Taiwan, an APAP overdose is also an important cause of acute liver failure [3]. An APAP toxic metabolite, N-acetyl-p-benzoquinone imine (NAPQI), is believed to be responsible for APAP-induced hepatotoxicity. Following an APAP overdose, high levels of APAP toxic metabolites deplete the hepatic endogenous antioxidant glutathione (GSH) pool and cause oxidative stress [4], further inducing mitochondrial toxicity and ultimately leading to cell death [5]. A large body of evidence indicated that oxidative stress is involved in acetaminophen toxicity [6,7].
Inflammatory responses may be involved in the APAP-induced pathophysiology. Hepatic macrophages were proposed to contribute to APAP-induced liver injury through the production of pro-inflammatory cytokines and mediators, such as tumor necrosis factor-alpha (TNF-α), interleukin-1 beta (IL-1β) [8], and IL-6 [9]. These observations revealed an association between APAP-induced liver injury and several inflammatory mediators, such as certain cytokines that modify the toxicity of APAP [10].
Eriobotrya japonica Lindl. (Loquat) is an evergreen fruit tree in the Rosaceae family, and leaves of the plant have been used in traditional medicine for the treatment of cough, chronic bronchitis, asthma, inflammatory diseases, diabetes, and cancer [11,12,13,14]. Triterpenes from the extract of loquat leaf exert various pharmaceutical effects [13,14], including anti-inflammatory [15,16,17], antioxidative [18], and hepatoprotective effects [19], and large amounts of triterpenes can be obtained from callus tissue cultures of loquat leaf [20,21].
In this context, we highlighted tormentic acid (TA) (Figure 1), one of the main pentacyclic triterpenes isolated from the bioreactor-cultured suspension callus of Eriobotrya japonica [22]. TA has been reported to exhibit anticancer [23,24,25], antibacterial [26], anti-inflammatory [27,28,29], and anti-atherogenic properties [30,31]. TA was also suggested to be a potential treatment for type 2 diabetes and hyperlipidemia [32], and has a potential hepatoprotective effect [27,33]. However, little information is available about the hepatoprotective effects of TA on APAP-induced liver injury. Thus, we investigated the effects of different doses of TA by comparing them to N-acetylcysteine (NAC), a clinical treatment for APAP overdose [21], in an animal model of acute APAP-induced liver injury.

2.1. Effect of TA on Hepatotoxicity in APAP-Treated Mice

2.2. Histopathology of the Liver

Based on the analysis of the hematoxylin and eosin (H & E)-stained tissue section, APAP intoxication generated extensive changes in liver morphology, including steatosis, inflammation, hepatocyte ballooning, and necrosis (Figure 3B). TA pretreatment apparently alleviated liver damage, as shown by the decreased necrotic areas and hepatocellular degeneration (Figure 3C–E). This finding was consistent with the levels of the enzyme markers.

2.3. Effect of TA on Lipid Peroxidation in APAP-Treated Mouse Livers

As shown in Figure 4A, the hepatic levels of thiobarbituric acid reactive substances (TBARS) were assessed as an indicator of lipid peroxidation in the tissue. Mice treated with APAP alone exhibited a significant increase (p < 0.001) in the tissue TBARS levels. TA (1.25, 2.5, and 5 mg/kg) notably prevented this increase in the TBARS levels compared to those in the APAP group. Moreover, NAC also prevented the elevation of the TBARS levels in the liver and maintained them at normal values.

2.4. Effect of TA on Serum ROS Levels in APAP-Treated Mice

2.5. Effect of TA on Serum Nitrite Levels in APAP-Treated Mice

Due to the short half-life of nitric oxide (NO) in biological fluid, serum nitrite, the stable end product of oxidation, is used to assess NO production. As shown in Figure 4C, the serum nitrite levels were significantly increased in APAP-treated mice compared to those in the control group (p < 0.001). However, TA pretreatment significantly reduced NO production in the APAP-treated mice (p < 0.05), and 5 mg/kg TA had the strongest inhibitory effect on NO production (p < 0.001) and was as effective as that in the NAC-treated group (p < 0.001).

Cytokines are protein mediators of inflammation and are produced following the activation of various cellular receptors. As shown in Figure 4D–F, the serum IL-1β, IL-6, and TNF-α levels were significantly increased in APAP-treated mice (p < 0.001). TA treatment significantly suppressed the release of these three cytokines (p < 0.001), which may partially diminish the inflammatory injury in the liver. The administration of 600 mg/kg NAC (positive control) also suppressed cytokine release.

2.7. Effects of TA on iNOS and COX-2 Expression in APAP-Treated Mouse Liver Tissues

2.8. Effect of TA on the Expression of the Antioxidant Enzymes GPx, CAT, and SOD

2.9. Effects of TA on APAP-induced Expression of HO-1 Protein in the Mice Liver

HO-1, an antioxidant protein, is expressed to counteract various stress conditions and can ameliorate the effects of oxidative stress, inflammation, and apoptosis. The effects of TA on HO-1 expression in APAP-treated livers were analyzed by Western blotting. HO-1 levels were significantly increased in the APAP-treated group due to the APAP-induced oxidative stress. However, pretreatment with TA significantly enhanced the increase in HO-1 expression compared to that in the APAP-treated group, which suggested an increased antioxidant capacity of TA (Figure 6).

2.10. Effects of TA on NF-κB and IκBα in APAP-Induced Mice

NF-κB is activated by a wide variety of pro-inflammatory cytokines, including TNF-α and IL-1β. We evaluated the cytosolic levels of NF-κB and IκBα in the liver tissues of APAP-treated mice using Western blotting analyses. As shown in Figure 7, pretreatment with TA maintained the cytosolic levels of NF-κB and IκBα, suggesting that TA may prevent the APAP-induced translocation of NF-κB into the nucleus and the degradation of IκBα.

2.11. Effects of TA on the APAP-Induced Phosphorylation of MAPK

APAP markedly induced the phosphorylation of MAPKs, including ERK1/2, JNK, and p38 MAPK. Pretreatment with TA effectively suppressed the APAP-induced phosphorylation of all three MAPKs (Figure 8). MAPK has been reported to be involved in the NF-κB pathway and other inflammatory pathways, and our data indicated that TA could also suppress the NF-κB pathway and inflammation by inactivating MAPKs.

Male ICR mice (seven to eight weeks) were obtained from the BioLASCO Taiwan Co., Ltd. (Taipei, Taiwan). The animals were housed in Plexiglas cages at a constant temperature of 22 ± 1°C and a relative humidity of 55 ± 5% on a 12 h dark-light cycle for at least two weeks before the experiment. Animals were provided food and water ad libitum. All experimental procedures were performed according to the guidelines of the Institutional Animal Ethics Committee, and the protocol was approved by the Committee for the Purpose of Control and Supervision of Experiments on Animals.
Mice were randomly divided into the following six groups (n = 5 mice/group): (1) control group, (2) APAP group (negative control), (3) APAP + TA (1.25 mg/Kg) group, (4) APAP + TA (2.5 mg/Kg) group, (5) APAP + TA (5 mg/Kg) group, and (6) APAP + NAC group (positive control). In the three experimental groups, the mice were pretreated with TA (1.25, 2.5, and 5 mg/kg in 1% carboxymethyl cellulose, by intraperitoneal (i.p.)) once daily for six consecutive days. The NAC group was pretreated with NAC (600 mg/kg in phosphate buffered saline (PBS), i.p.) once daily for six days. The mice in the control and APAP groups received PBS only. One hour after the final treatment, acute liver injury was induced in all groups, except for the control group, by an i.p. injection of APAP (400 mg/kg). Fresh APAP was made immediately prior to its use in warm PBS (pH 7.4). The mice were starved for 12 h after the APAP treatment and then euthanized. Blood samples were collected from the carotid arteries. The mortality rate and body weight were recorded every day. APAP (acetaminophen) and N-acetylcysteine (NAC) were purchased from Sigma-Aldrich Inc. (St. Louis, MO, USA).

Small pieces of the anterior portion of the left lateral lobe of the liver were fixed in 10 % buffered formalin and embedded in paraffin. Sections of 4–5 μm were cut and stained with hematoxylin and eosin, and then examined for histopathological changes under the microscope (Nikon, ECLIPSE, TS100, Tokyo, Japan). Images were captured with a digital camera (NIS-Elements D 2.30, SP4, Build 387) at an original magnification of 400×.

Thiobarbituric acid reactive substances (TBARS) (in particular, malondialdehyde (MDA)), are the products of the oxidative degradation of polyunsaturated fatty acids. The MDA levels were determined to assay lipid peroxidation by measuring the absorbance at 535 nm following the reaction of MDA with thiobarbituric acid, as previously reported [59]. Briefly, 0.4 mL of liver extracts was mixed with 0.4 mL of thiobarbituric acid reagent (consisting of 0.4% thiobarbituric acid (TBA) and 0.2% butylated hydroxytoluene (BHT)). The reaction mixture was placed in a 90 °C water bath for 45 min and cooled, and an equal volume of n-butanol was added. The mixture was then centrifuged and the absorbance of the supernatant was recorded at 535 nm. A standard curve was obtained with a known amount of 1,1,3,3-tetraethoxypropane (TEP) using the same assay procedure. The levels of lipid peroxidation are expressed in terms of TBARS nmol/mg protein.

4.6. Measurement of the Levels of ROS in Serum

The effect of TA on ROS generation was determined by 2′,7′-dichlorofluorescin diacetate (DCFH-DA) (Sigma-Aldrich, St. Louis, MO, USA). Briefly, the serum was incubated with 100 μM DCFH-DA for 30 min at 37 °C in the dark place. Dichlorofluorescein (DCF) fluorescence intensities were detected by a Synergy HT Microplate Reader (BioTek Instruments) at an excitation and emission wavelength of 485 nm and 535 nm, respectively.

NO production was indirectly assessed by measuring the nitrite levels in serum using a calorimetric method based on the Griess reaction [60]. Serum samples were diluted four-fold with distilled water and deproteinized by adding a 1/20 volume of zinc sulfate (300 g/L) to a final concentration of 15 g/L. After centrifugation at 10,000× g for 5 min at room temperature, 100 μL of the supernatant was applied to a well of a microtiter plate, followed by 100 μL of Griess reagent (1% sulfanilamide and 0.1% N-1-naphthylethylenediamine dihydrochloride in 2.5% polyphosphoric acid). After 10 min of color development at room temperature, the absorbance was measured at 540 nm with a Micro-Reader (Molecular Devices, Sunnyvale, CA, USA). The nitrite concentrations were determined by measuring the absorbance at 540 nm and comparing the values to a standard curve of sodium nitrite.

Data obtained from animal experiments were expressed as the means and standard errors of the means (± SEM). Statistical evaluations were conducted using one-way analysis of variance (ANOVA) followed by Scheffe’s multiple range tests. Statistical significance is expressed as * p < 0.05, ** p < 0.01, and *** p < 0.001.

TA effectively attenuated APAP-induced liver injury through various mechanisms. TA significantly suppressed APAP-induced oxidative stress. Furthermore, TA significantly decreased the levels of pro-inflammatory cytokines. In addition, the potential anti-inflammatory activity of TA, which is involved in inhibiting the MAPK and NF-κB pathways, contributes to its hepatoprotective effects. Taken together, the results indicate that TA may be a potential therapeutic strategy to prevent acute liver injury due to an acetaminophen overdose. Based on our data, TA produced from suspension cultures has considerable potential for development as a natural hepatoprotective agent for the treatment of toxic acute liver failure.

We are grateful to the Tsuzuki Institute for Tradtional Medicine for their financial support. 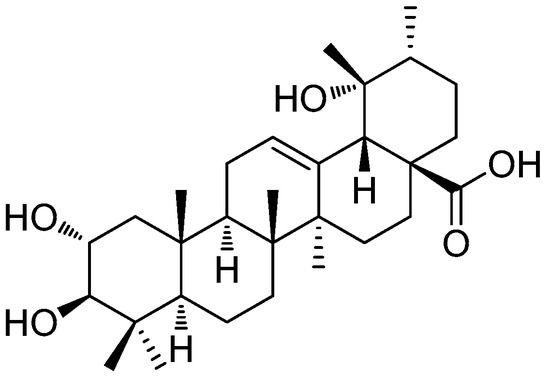 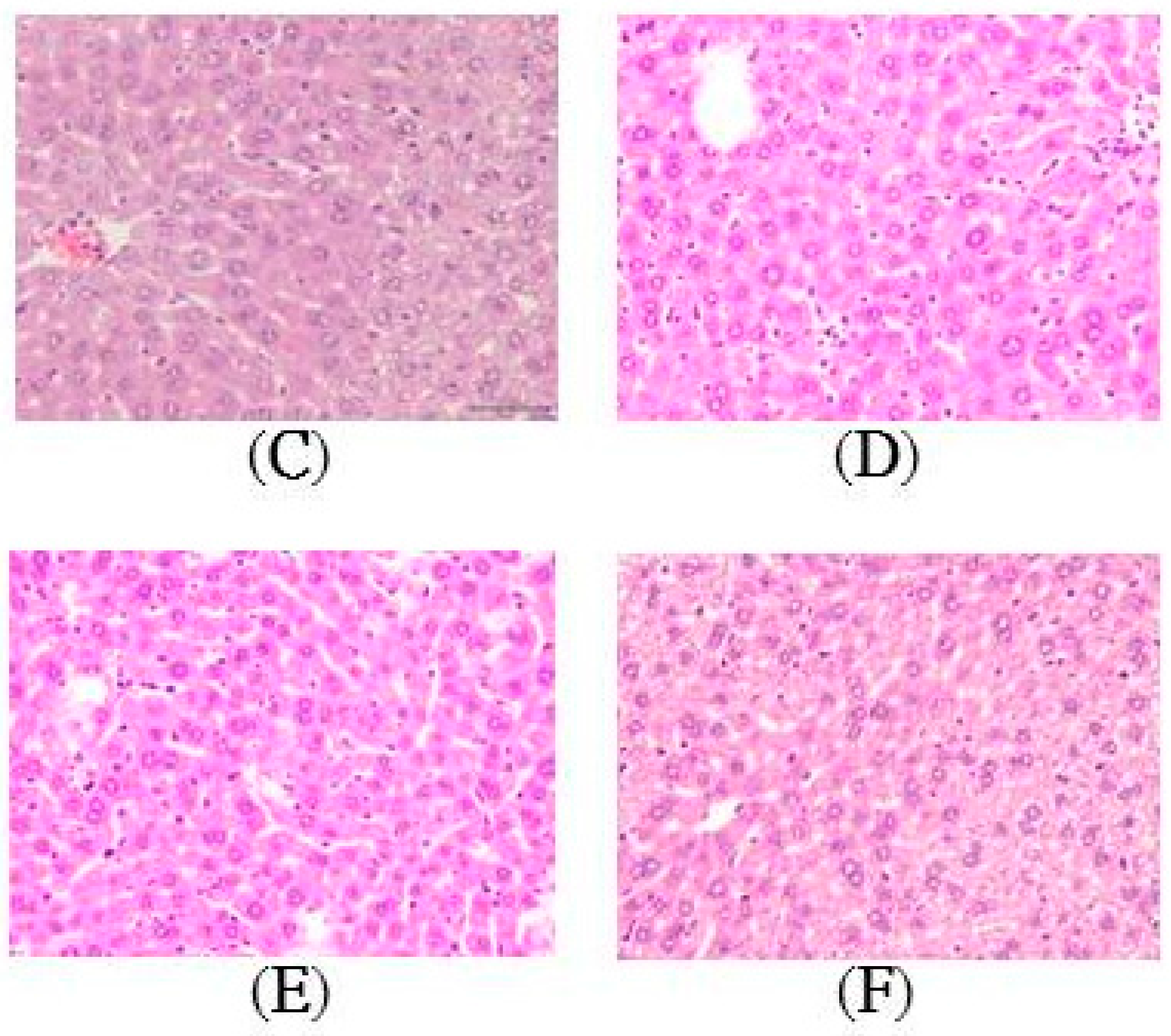 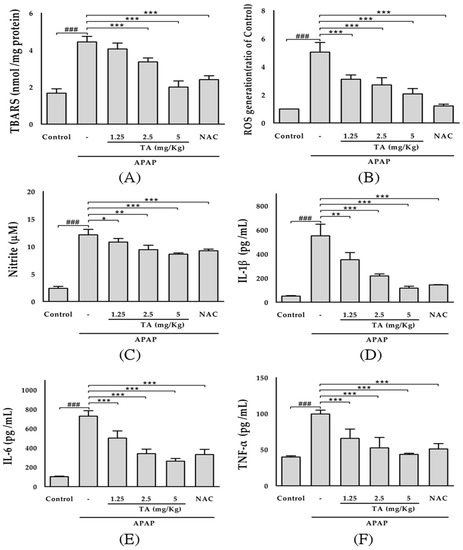 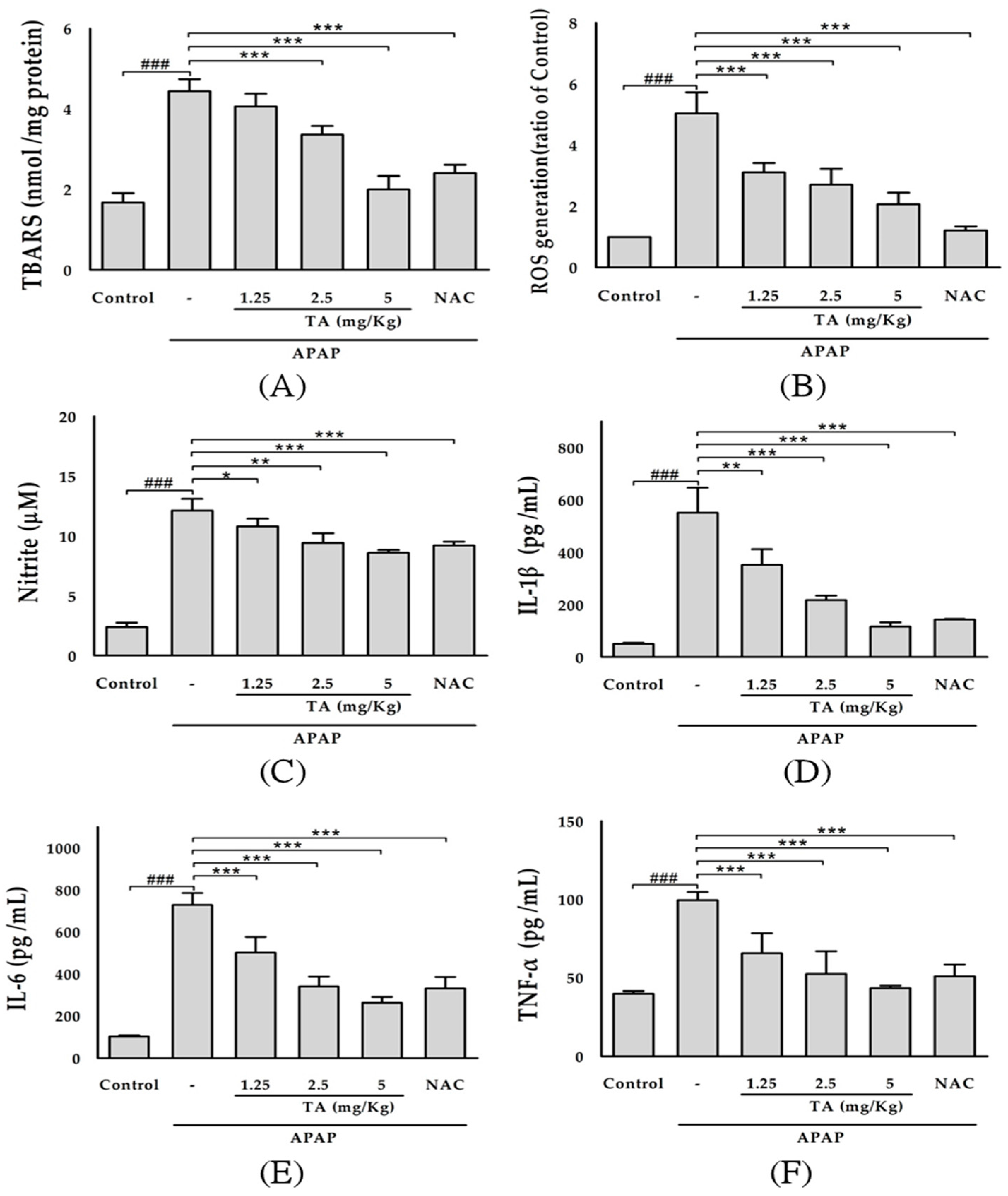