On the Many Actions of Ouabain: Pro-Cystogenic Effects in Autosomal Dominant Polycystic Kidney Disease
Next Article in Special Issue

In Vitro Glucuronidation and Sulfation of ε-Viniferin, a Resveratrol Dimer, in Humans and Rats

ε-Viniferin is a resveratrol dimer that possesses antioxidant or anti-inflammatory activities. However little is known about the metabolism of this oligostilbene. This study was thus undertaken as a first approach to identify and characterize the metabolites of ε-viniferin and to describe the kinetic profile of their appearance in humans and rats. The glucuronides and sulfates of ε-viniferin were first obtained by chemical hemi-synthesis and were fully characterized by UPLC-MS and NMR spectroscopy. Then, ε-viniferin was incubated with human or rat S9 liver fractions that led to the formation of four glucuronoconjugates and four sulfoconjugates. In both species, ε-viniferin was subjected to an intense metabolism as 70 to 80% of the molecule was converted to glucuronides and sulfates. In humans, the hepatic clearance of ε-viniferin (Vmax/Km) for glucuronidation and sulfation were 4.98 and 6.35 µL/min/mg protein, respectively, whereas, in rats, the hepatic clearance for glucuronidation was 20.08 vs. 2.59 µL/min/mg protein for sulfation. In humans, three major metabolites were observed: two glucuronides and one sulfate. By contrast, only one major glucuronide was observed in rats. This strong hepatic clearance of ε-viniferin in human and rat could explain its poor bioavailability and could help to characterize its active metabolites. View Full-Text
Keywords: ε-viniferin; metabolism; human; rat; liver; sulfation; glucuronidation; hemi-synthesis ε-viniferin; metabolism; human; rat; liver; sulfation; glucuronidation; hemi-synthesis
►▼ Show Figures 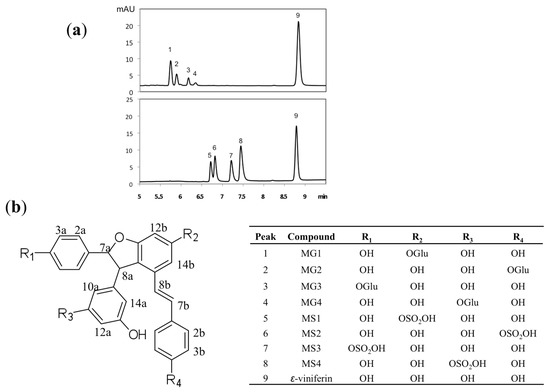