Excited-State Dynamics of the Thiopurine Prodrug 6-Thioguanine: Can N9-Glycosylation Affect Its Phototoxic Activity?

The present work is directed toward understanding the mechanisms of excited state deactivation in three neutral model peptides containing the phenylalanine residue. The excited state dynamics of thefolded form of N-acetylphenylalaninylamide (NAPA B) and its amide-N-methylated derivative (NAPMA B) is reviewed and compared to the dynamics of the monohydrated structure of NAPA (NAPAH). The goal is to unravel how the environment, and in particular solvation, impacts the photodynamics of peptides. The systems are investigated using reaction path calculations and surface hopping nonadiabatic dynamics based on the coupled cluster doubles (CC2) method and time-dependent density functional theory. The work emphasizes the role that excitation transfer from the phenylto amidestate plays in the deactivation of the three systems and shows how the ease of out-of-plane distortions of the amide group determines the rate of population transfer between the two electronic states. The subsequent dynamics on thestate is barrierless along several pathways and leads to fast deactivation to the ground electronic state. View Full-Text
Keywords: nonadiabatic molecular dynamics; nonradiative deactivation; peptide; phenylalanine nonadiabatic molecular dynamics; nonradiative deactivation; peptide; phenylalanine
►▼ Show Figures 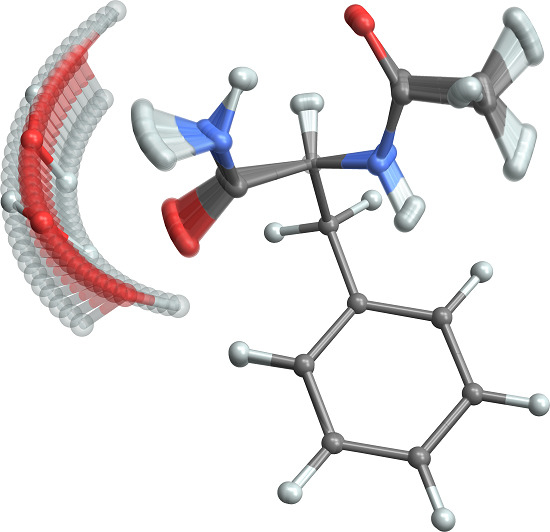