The Architecture of Thiol Antioxidant Systems among Invertebrate Parasites

The use of oxygen as the final electron acceptor in aerobic organisms results in an improvement in the energy metabolism. However, as a byproduct of the aerobic metabolism, reactive oxygen species are produced, leaving to the potential risk of an oxidative stress. To contend with such harmful compounds, living organisms have evolved antioxidant strategies. In this sense, the thiol-dependent antioxidant defense systems play a central role. In all cases, cysteine constitutes the major building block on which such systems are constructed, being present in redox substrates such as glutathione, thioredoxin, and trypanothione, as well as at the catalytic site of a variety of reductases and peroxidases. In some cases, the related selenocysteine was incorporated at selected proteins. In invertebrate parasites, antioxidant systems have evolved in a diversity of both substrates and enzymes, representing a potential area in the design of anti-parasite strategies. The present review focus on the organization of the thiol-based antioxidant systems in invertebrate parasites. Differences between these taxa and its final mammal host is stressed. An understanding of the antioxidant defense mechanisms in this kind of parasites, as well as their interactions with the specific host is crucial in the design of drugs targeting these organisms. View Full-Text
Keywords: antioxidant systems; parasites; thiol-dependent peroxidase; disulfide reductase; redoxin; thiol; redox mechanisms antioxidant systems; parasites; thiol-dependent peroxidase; disulfide reductase; redoxin; thiol; redox mechanisms
►▼ Show Figures 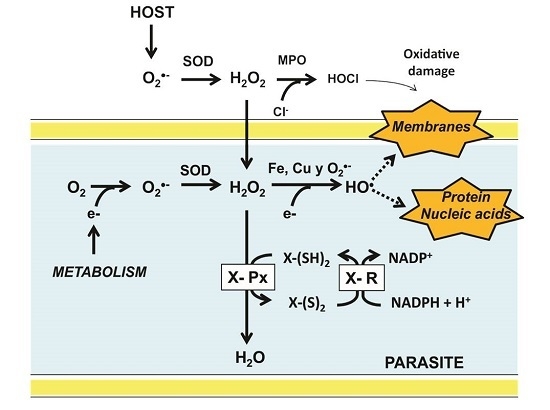