Synthesis of Novel Glycerol-Derived 1,2,3-Triazoles and Evaluation of Their Fungicide, Phytotoxic and Cytotoxic Activities
Previous Article in Journal

:
Skeletal muscle is a major insulin-target tissue and plays an important role in glucose homeostasis. Impaired insulin action in muscles leads to insulin resistance and type 2 diabetes mellitus. 5′ AMP-activated kinase (AMPK) is an energy sensor, its activation increases glucose uptake in skeletal muscle and AMPK activators have been viewed as a targeted approach in combating insulin resistance. We previously reported AMPK activation and increased muscle glucose uptake by rosemary extract (RE). In the present study, we examined the effects and the mechanism of action of rosmarinic acid (RA), a major RE constituent, in L6 rat muscle cells. RA (5.0 µM) increased glucose uptake (186 ± 4.17% of control, p < 0.001) to levels comparable to maximum insulin (204 ± 10.73% of control, p < 0.001) and metformin (202 ± 14.37% of control, p < 0.001). Akt phosphorylation was not affected by RA, while AMPK phosphorylation was increased. The RA-stimulated glucose uptake was inhibited by the AMPK inhibitor compound C and was not affected by wortmannin, an inhibitor of phosphoinositide 3-kinase (PI3K). The current study shows an effect of RA to increase muscle glucose uptake and AMPK phosphorylation. RA deserves further study as it shows potential to be used as an agent to regulate glucose homeostasis.
Keywords:
muscle; rosmarinic acid; AMPK; glucose uptake

Skeletal muscle is a primary target tissue of insulin and plays a critical role in the maintenance of glucose homeostasis [1]. After binding to its receptor, insulin increases the receptor tyrosine kinase activity which leads to GLUT4 glucose transporter translocation to the plasma membrane via activation of the lipid kinase phosphoinositide 3-kinase (PI3K) and the serine/threonine kinase Akt/PKB [2,3]. Impairment of the PI3K–Akt cascade leads to insulin resistance and type 2 diabetes mellitus (T2DM) [4,5,6], a disease expected to affect 412 million people globally by 2040 [7].
AMP-activated protein kinase (AMPK) is a serine/threonine kinase that has a potential to regulate blood glucose levels. As an energy sensor, AMPK is activated by increased AMP/ATP ratio and/or via activation of its upstream kinases, liver kinase B1 (LKB1) and calmodulin dependent protein kinases (CaMKKs) [8,9]. Muscle AMPK is activated through muscle contraction/exercise [8]. Several compounds including metformin [10], thiazolidineones [11] and polyphenols such as resveratrol [12] and naringenin [13] are also known to activate AMPK and increase muscle glucose uptake. In recent years, AMPK activators have been recognized as a promising pharmacological intervention for the prevention and treatment of T2DM [8,9,14,15,16,17,18].
Rosemary (Rosmarinus officinalis L.) is an aromatic evergreen plant endemic to the Mediterranean region and South America that is reported to exhibit antioxidant, anticancer and antimicrobial effects [19,20]. In addition, beneficial effects have been reported in regards to lipid metabolism and plasma glucose levels [21,22,23,24,25,26]. Previous studies by our group examined the effects of rosemary extract (RE) [27] on skeletal muscle cells and found a significant increase in glucose uptake and AMPK activation. In vivo studies demonstrated that administration of RE decreased plasma glucose levels in streptozotocin-induced diabetic mice [21], rats [23,25,26], alloxan-induced diabetic rabbits [22], and in genetic [24] and dietary [26,28,29] animal models of obesity and insulin resistance. RE is composed of various polyphenols with carnosic acid (CA) and rosmarinic acid (RA) being the most abundant in regards to concentration [30]. It is therefore possible that the beneficial effects observed with RE administration may be due to the action of a specific polyphenol. We recently found a significant increase in muscle cell glucose uptake and activation of AMPK by CA [31].
In the present study, we focused on RA and examined its direct effect on muscle cell glucose uptake, and investigated the signaling molecules that may be involved.

Previous evidence indicates that activation of protein kinase C (PKC) leads to an increase in glucose uptake in muscle cells in response to different stimuli [34,35,36,37]. Based on this evidence and our data showing partial and not complete inhibition of RA-stimulated glucose uptake with AMPK inhibition (Figure 4B), we hypothesized that PKCs may play a role in RA-stimulated glucose uptake. To address this hypothesis, we used bisindolylmaleimide I (BMD), a selective inhibitor of PKCα-, βI-, βII-, γ-, δ- and ε- isozymes, used extensively in other studies [38,39,40]. BMD did not have any effect on the basal glucose uptake (103 ± 3.4% of control) (Figure 7A). Furthermore, RA-stimulated glucose uptake was not affected by BMD (RA: 190 ± 4.6% of control, BMD + RA: 188 ± 7.3% of control) (Figure 7A). Additionally, we investigated the effect of RA on PKC phosphorylation, which is correlated with an increase in PKC activity [41], using a specific antibody phospho-PKC (pan) that recognizes conventional (α, βI, βII) and novel (δ, ε, η and θ) PKCs (Figure 7B). Treatment of the cells with RA did not have any effect on PKC phosphorylation/activation (Figure 7B). On the other hand, treatment with 12-O-tetradecanoylphorbol-13-acetate (TPA) significantly increased PKC phosphorylation. Furthermore, in the presence of BMD, the TPA-induced PKC phosphorylation/activation was completely abolished, indicating that in our experiments, BMD acts as an effective inhibitor of PKCs.

2.6. Effect of RA on Glucose Transporters

In conclusion, the present study shows a direct effect of rosmarinic acid (RA) to significantly increase glucose uptake in L6 muscle cells to levels comparable to insulin and metformin. The glucose uptake was partially but significantly inhibited in the presence of compound C, an inhibitor of AMPK, but was not affected by wortmannin, an inhibitor of PI3K, indicating a mechanism that is partially dependent on AMPK and independent of PI3K. Overall, more studies should be performed to investigate further the potential of rosmarinic acid to be used to prevent and/or manage insulin resistance and T2DM.

The preparation of RE was conducted as previously described. As a standard we used RE and RA which were dissolved at a concentration of 2 mg/mL in sterile DMSO. 2.5 μL of previously prepared aliquots were injected into a reversed-phase Agilent 1100 series high-performance liquid chromatography (HPLC) instrument which was equipped with an autosampler. Quantification and separation were conducted at 25 °C via mobile phase consisting of solvent A and solvent B. Solvent A consisted of 0.1% formic acid and solvent B consisted of acetonitrile. Over 30 min, a linear gradient of 95% solvent A and 5% solvent B was attained. The detection was set at 254 nm and the flow rate at 0.4 mL/min. Identification of RA was achieved by comparison of the actual retention time to those of authentic reference standard of RA. Furthermore, quantification of RA was done by calculating the peak areas after completion of HPLC separation. Mean total content was expressed in % (g/100 g dry weight extract).

L6 rat muscle (parental, overexpressing GLUT4myc and GLUT1myc) cells were grown in α-MEM media containing 2% v/v fetal bovine serum (FBS) until fully differentiated. Myotube stage was reached at approximately 6 to 7 days after seeding. Prior to the experiments, the cells were serum-deprived for 3 h followed by treatment as described in the figures. After treatment, the cells were washed with HEPES-buffered saline (HBS) solution and exposed to 10 µM [3H]-2-deoxy-d-glucose in HBS for 10 min to measure glucose uptake. Exposure to 10 µM cytochalasin B was used to determine the non-specific glucose uptake. At the end of the 10 min uptake time, the cells were rinsed with 0.9% NaCl solution followed by 0.05 M NaOH lysis buffer. Liquid scintillation counter (PerkinElmer) was used to measure radioactivity. Bio-Rad protein assay was used to quantify protein levels.

After treatment, fully differentiated GLUT4myc- or GLUT1myc-overexpressing myotubes were fixed using 3% paraformaldehyde for 10 min at 4 °C and additional 20 min at room temperature followed by exposure to 1% glycine in PBS, and blocked with 10% goat serum in PBS for 15 min at 4 °C. The cells were then incubated with an anti-myc antibody for 60 min at 4 °C followed by exposure to peroxidase-conjugated goat anti-rabbit IgG at room temperature for 30 min. The cells were rinsed and incubated with o-phenylenediamine dihydrochloride (OPD) reagent for 30 min at room temperature and the reaction was stopped by adding 3 M HCl. The absorbance of the supernatant was measured at 492 nM.

L6 cells (parental, GLUT4myc- and GLUT1myc-overexpressing) were a kind gift from A. Klip (Hospital for Sick Children, Toronto, ON, Canada). Support was provided by a Natural Sciences and Engineering Research Council of Canada (NSERC) grant to E. Tsiani. T. Hudlicky was also supported by a NSERC grant. A Brock Library Open Access Publishing Fund was awarded to F. Vlavcheski and used towards publication fee payment. 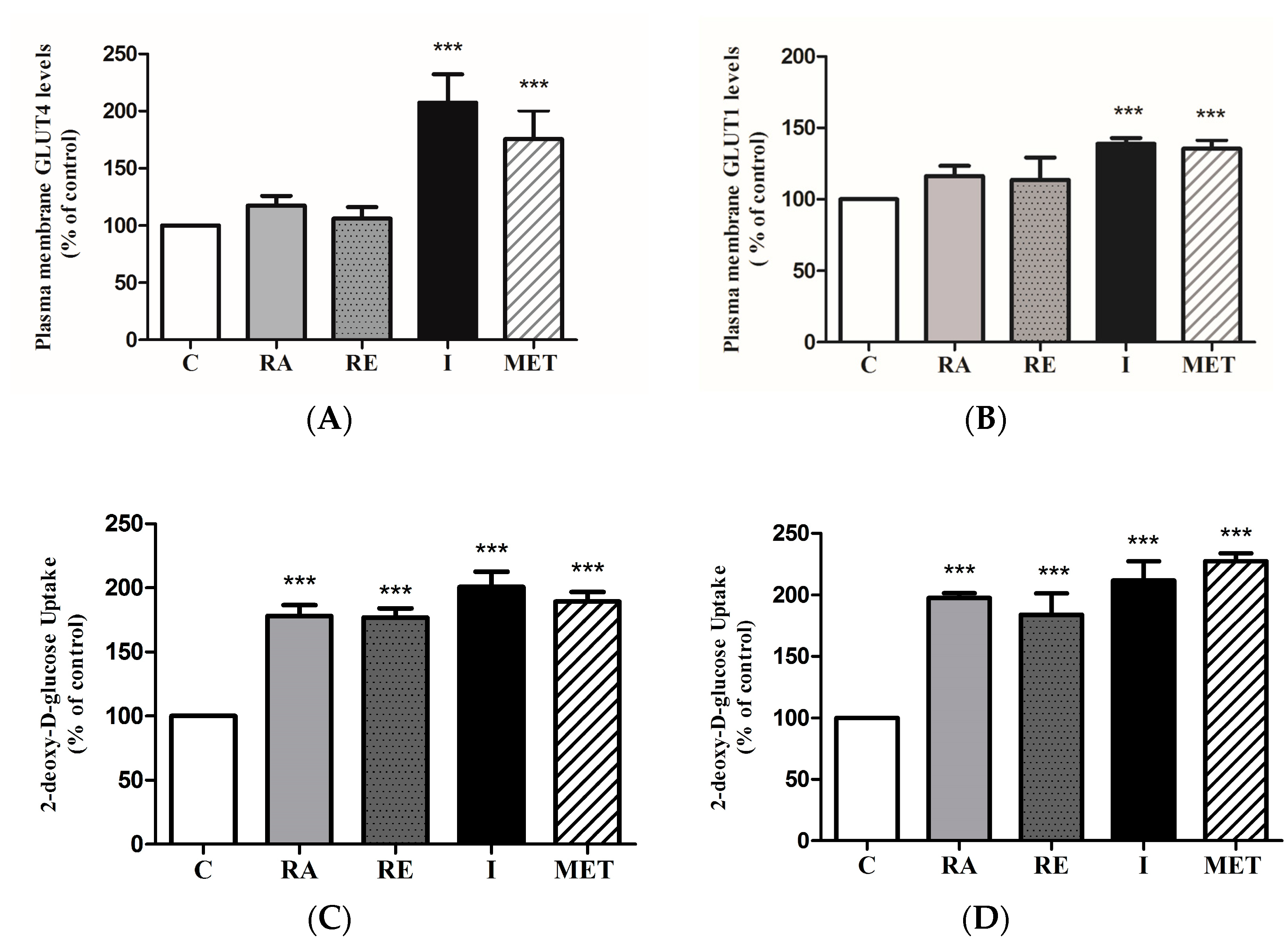