Although antibody functions are executed in heterogeneous blood streams characterized by molecular crowding and promiscuous intermolecular interaction, detailed structural characterizations of antibody interactions have thus far been performed under homogeneous in vitro conditions. NMR spectroscopy potentially has the ability to study protein structures in heterogeneous environments, assuming that the target protein can be labeled with NMR-active isotopes. Based on our successful development of isotope labeling of antibody glycoproteins, here we apply NMR spectroscopy to characterize antibody interactions in heterogeneous extracellular environments using mouse IgG-Fc as a test molecule. In human serum, many of the HSQC peaks originating from the Fc backbone exhibited attenuation in intensity of various magnitudes. Similar spectral changes were induced by the Fab fragment of polyclonal IgG isolated from the serum, but not by serum albumin, indicating that a subset of antibodies reactive with mouse IgG-Fc exists in human serum without preimmunization. The metaepitopes recognized by serum polyclonal IgG cover the entire molecular surface of Fc, including the binding sites to Fc receptors and C1q. In-serum NMR observation will offer useful tools for the detailed characterization of biopharamaceuticals, including therapeutic antibodies in physiologically relevant heterogeneous environments, also giving deeper insight into molecular recognition by polyclonal antibodies in the immune system. View Full-Text
Keywords: Fc; NMR spectroscopy; polyclonal antibody; serum; stable isotope labeling Fc; NMR spectroscopy; polyclonal antibody; serum; stable isotope labeling
►▼ Show Figures 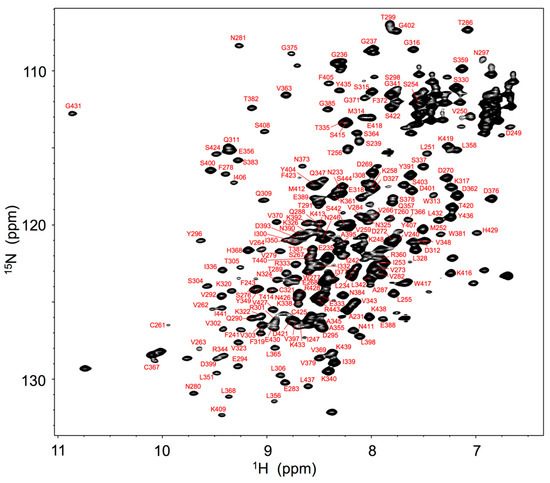