Microfabricated devices have increasingly incorporated bacterial cells for microscale studies and exploiting cell-based functions in situ. However, the role of surface interactions in controlling the bacterial cell behavior is not well understood. In this study, microfluidic substrates of varied bacterial-binding affinity were used to probe the interaction-driven behavior of filamentous Escherichia coli. In particular, cell alignment under controlled shear flow as well as subsequent orientation and filamentation were compared between cells presenting distinct outer membrane phenotypes. We demonstrated that filaments retained position under flow, which allowed for dynamic single-cell monitoring with in situ elongation of over 100 μm for adherent cells. This maximum was not reached by planktonic cells and was, therefore, adhesion-dependent. The bound filaments initially aligned with flow under a range of flow rates and their continual elongation was traced in terms of length and growth path; analysis demonstrated that fimbriae-mediated adhesion increased growth rate, increased terminal length, as well as dramatically changed the adherent geometry, particularly buckling behavior. The effects to filament length and buckling were further exaggerated by the strongest, specificity-driven adhesion tested. Such surface-guided control of the elongation process may be valuable to yield interesting “living” filamentous structures in microdevices. In addition, this work may offer a biomedically relevant platform for further elucidation of filamentation as an immune-resistant morphology. Overall, this work should inspire broader exploration of microfabricated devices for the study and application of single bacterial cells. View Full-Text
Keywords: filamentous bacteria; fimbriae; mannosylated substrate; adhesion; orientation; microfluidic; buckle; shear flow filamentous bacteria; fimbriae; mannosylated substrate; adhesion; orientation; microfluidic; buckle; shear flow
►▼ Show Figures 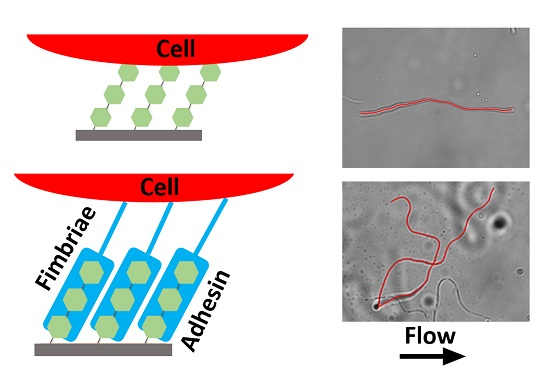