:
Triazine derivatives, namely, 2,4,6-tris(quinolin-8-yloxy)-1,3,5-triazine (T3Q), N2,N4,N6-tris(pyridin-2-ylmethyl)-1,3,5-triazine-2,4,6-triamine (T3AMPy) and 2,2′,2′′-[(1,3,5-triazine-2,4,6-triyl)tris(azanediyl)] tris(ethan-1-ol) (T3EA) were synthesized and their inhibition of steel corrosion in hydrochloric acid solution was investigated using electrochemical techniques. The corrosion protection of the prepared compounds increased with increasing concentration and reached up to 98% at 250 ppm. The adsorption of T3Q, T3AMPy, and T3EA on the steel surface was in accordance with the Langmuir adsorption isotherm. The electrochemical results revealed that T3Q, T3AMPy and T3EA act as excellent organic inhibitors and can labeled as mixed type inhibitors. The efficiencies of the tested compounds were affected by the nature of the side chain present in the triazine ring, where T3EA gave the least inhibition while T3Q and T3AMPy gave higher and almost the same inhibition effects. The inhibition efficiencies obtained from the different electrochemical techniques were in good agreement.
Keywords:
trisubstituted-s-triazine; organic inhibitors; corrosion; steel; polarization

The use of inhibitors to protect steel from corrosion, mainly in acidic solutions, is one of the most practical methods [1,2,3]. Acids such as HCl, [4,5,6] HNO3, and H2SO4 [7] are usually used for the elimination of metal scale and rust in many manufacturing processes. Because of their aggressive effect on the metal surface, inhibitors are comprehensively used to decrease the corrosion of the metal [8,9]. Organic compounds, especially those composed of nitrogen, oxygen and sulfur atoms, represent the majority of inhibitors used in industry [10,11,12,13]. Inhibitors which contain multiple (double or triple) bonds play an important role in the adsorption and the interaction of these compounds onto the metal surfaces [2]. The adsorption of the organic molecules [14], the charge density [15,16], the mode of adsorption [17,18], the exposal area [19] of the organic inhibitors and the molecular weight could all affect the efficiency of an inhibitor [20]. Organic compounds generally inhibit the corrosion of the metal by forming a film on the metal surface. The degree of inhibition depends on the chemical composition, the structure and the ability of the inhibitor to adsorb on the metal surface. The adsorption of these compounds is influenced by the their electronic structure, steric factors, aromatic character and electron density of the functional groups such as –NH, –N=N–, –C=N, –CHO, R–OH, etc. located at the donor site such [20,21,22,23,24,25].
Recently Shukla et al. [26] reported the hexahydro-s-triazine derivatives 1a–e (Figure 1) as corrosion inhibitors of steel in 1 N HCl and the inhibition effect depend on the electronic nature of the functional groups present in the compounds.
The work we report here describes a one step and an easy method for the synthesis of three sym-trisubstituted 1,3,5-triazine derivatives T3Q, T3AMPy and T3EA with different terminal side chains on the triazine ring (Scheme 1) and their application as promising novel organic corrosion inhibitors for steel in HCl solutions.

The effect of the concentration of 4, 6 and 8 on the polarization curves of steel in acidic chloride solutions is shown in Figure 2, Figure 3 and Figure 4, respectively. These figures show that the addition of 4, 6, or 8 to the acidic chloride solution is accompanied by a lowering of the current densities in both directions of the polarization curves. Accordingly, the compounds 4, 6 and 8 can be labeled as mixed type inhibitors that decrease the anodic and cathodic reactions [27]. All the estimated electrochemical parameters for the compounds 4, 6, and 8 are quoted in Table 1. The data clearly shows a dependence of the current density (Icorr) on the concentrations of 4, 6 and 8. It is obvious that Icorr values decreased with increasing inhibitor concentration and the corrosion protection occurred via blocking adsorption of T3Q, T3AMPy and T3EA on the active sites of steel, which enhances the corrosion protection performance of T3Q, T3AMPy and T3EA. The results can be explained on the basis of adsorption of T3Q, T3AMPy and T3EA molecules on the cathodic active sites, which retards the reduction of the H+ ion and the corresponding hydrogen evolution by increasing the energy barrier for proton discharge [28,29]. In addition, the anodic dissolution of steel was decreased by the addition of the adsorbed molecules (T3Q, T3AMPy and T3EA) on the anodic active sites. The adsorption of T3Q, T3AMPy and T3EA molecules on the steel surface led to formation of a protective layer and causes a shift in Ecorr to more noble [2,30]. Then, we can conclude that the additions of T3Q, T3AMPy and T3EA to the acidic chloride solution caused an enhancement in the corrosion protection performance of steel.
The percentage inhibition efficiency (IE, %) can be calculated from: where Icorr (i) is the corrosion current density in the inhibited and Icorr (b) is the corrosion current density in the uninhibited solution. The IE values were calculated from Equation (4) and presented in Table 1 for T3Q and T3AMPy. As observed from Table 1, the IE is highly dependent on the concentration of the tested materials and increased with increasing concentration of T3Q, T3AMPy and T3EA. The maximum inhibition efficiency (98% for T3Q, 96% for T3AMPy and 85% for T3EA) was attained at a concentration of 250 ppm.

The replacement of the pre-adsorbed water molecules by adsorption of the tested materials can be attributed to the interaction energy between the tested materials and the exposed surface. Investigating the different types of adsorption isotherms provide an explanation about the interaction between the steel surface and the T3Q, T3AMPy and T3EA. The experimental data was found to fit well with the Langmuir adsorption isotherm among the various adsorption isotherms. The Langmuir adsorption isotherm related the surface coverage (θ) and the concentration of inhibitor (Cinh) as follows [36]:
C(inh)/θ = 1/Kads + C(inh)
where C(inh) is inhibitor concentration and Kads is the equilibrium constant for the adsorption process. The linear relation obtained by plotting C(inh)/θ versus C(inh) is shown in Figure 9a–c for T3Q, T3AMPy and T3EA, respectively. The regression coefficients were also calculated and found to be 0.999 for T3Q and T3AMPy and 0.99 for T3EA. The calculated value of the slope and the R2 suggests that the adsorption of T3Q, T3AMPy and T3EA on the steel surface follows the Langmuir adsorption isotherm. The standard free energy of adsorption (ΔG°ads) and the adsorption constant (Kads) are related by the following equation:
ΔG°ads = −RT ln(55.5Kads)
There are two types of adsorption, the first is the physical adsorption and the second one is the chemical adsorption. The former one is predominating when the values of ΔGads around −20 kJ·mol−1 or lower due to the electrostatic interactions between charged T3Q and TA3MPy and charged steel. The latter process is predominant when the value of ΔG°ads around −40 kJ·mol−1 or higher through formation of coordinate bond. The estimated values of ΔG°ads are −35.65 and −35.85 kJ·mol−1 for T3Q and T3AMPy, respectively. In case of T3EA it was found to be −31.87 kJ·mol−1. The results suggest that the adsorption mechanism of T3Q, T3AMPy and T3EA on steel surface occurs via physical and chemical adsorption (comprehensive adsorption) [37]. The physical adsorption of the triazine derivatives occurred via electrostatic interactions between the protonated tested materials and the negatively charged steel surface resulted from the adsorption of Cl−anions as shown in Figure 10a. Nitrogen atoms of the triazine ring and hydrazine have unshared electron pairs, which are shared with the empty d-orbital of iron atoms on the steel surface and enhanced the chemical adsorption as shown in Figure 10b. In addition, electron donor−acceptor interactions may also arise between the π-electrons of the imine (C=N) groups of the 1,3,5 triazine ring and the empty d-orbital of iron atoms as shown in Figure 10c. The spontaneity and strong adsoption of T3Q and T3AMPy on steel surface can be accounted the high negative values of ΔG°ads [35,38].

3.2. General Method for the Synthesis of 1,3,5-Triazine Derivatives

Polarization curves and EIS data were conducted using a Solartron 1470E (multichannel system, (Solartron, Armstrong Mall, Farnborough, Hampshire, UK)) with the Solartron 1455A as FRA. The polarization curves were recorded with a sweep rate of 1 mV/s. EIS measurements were measured in the frequency range of 0.01–10 kHz. Pt sheet was used as counter electrode while a calomel electrode was used as arefernce electrode. The working electrode was cut from steel rod with the following composition (wt: 0.14% C, 0.57% Mn, 0.21% P, 0.15% S, 0.37% Si, 0.06% V, 0.03% Ni, 0.03% Cr and Fe balance. The test solution used in all experiments was 1M HCl containing different concentrations of the investigated inhibitors (50–250 ppm).

The electrochemical results revealed that T3Q and TA3MPy have excellent corrosion protection performance towards the corrosion of steel in acidic chloride solution. The protection of steel occurs via adsorption of T3Q, T3AMPy and T3EA and blocking of the active sites on the steel surface. The electrochemical results revealed that the inhibition occurs by suppressing the anodic and cathodic reactions. The calculated values of IE from the EIS method follow the same trend as those obtained from the polarization results. The results obtained indicated that the more nitrogen atoms in the terminal groups of the inhibitor, the better the corrosion protection performance, so T3Q and T3AMPy gave better protection for steel than T3EA, which has an oxygen atom in its terminal side chain of the triazine moiety. Finally, the triazine moiety is not the only factor responsible for the inhibitory action, but also the structure of the side chain attached has a major effect for the corrosion inhibition. 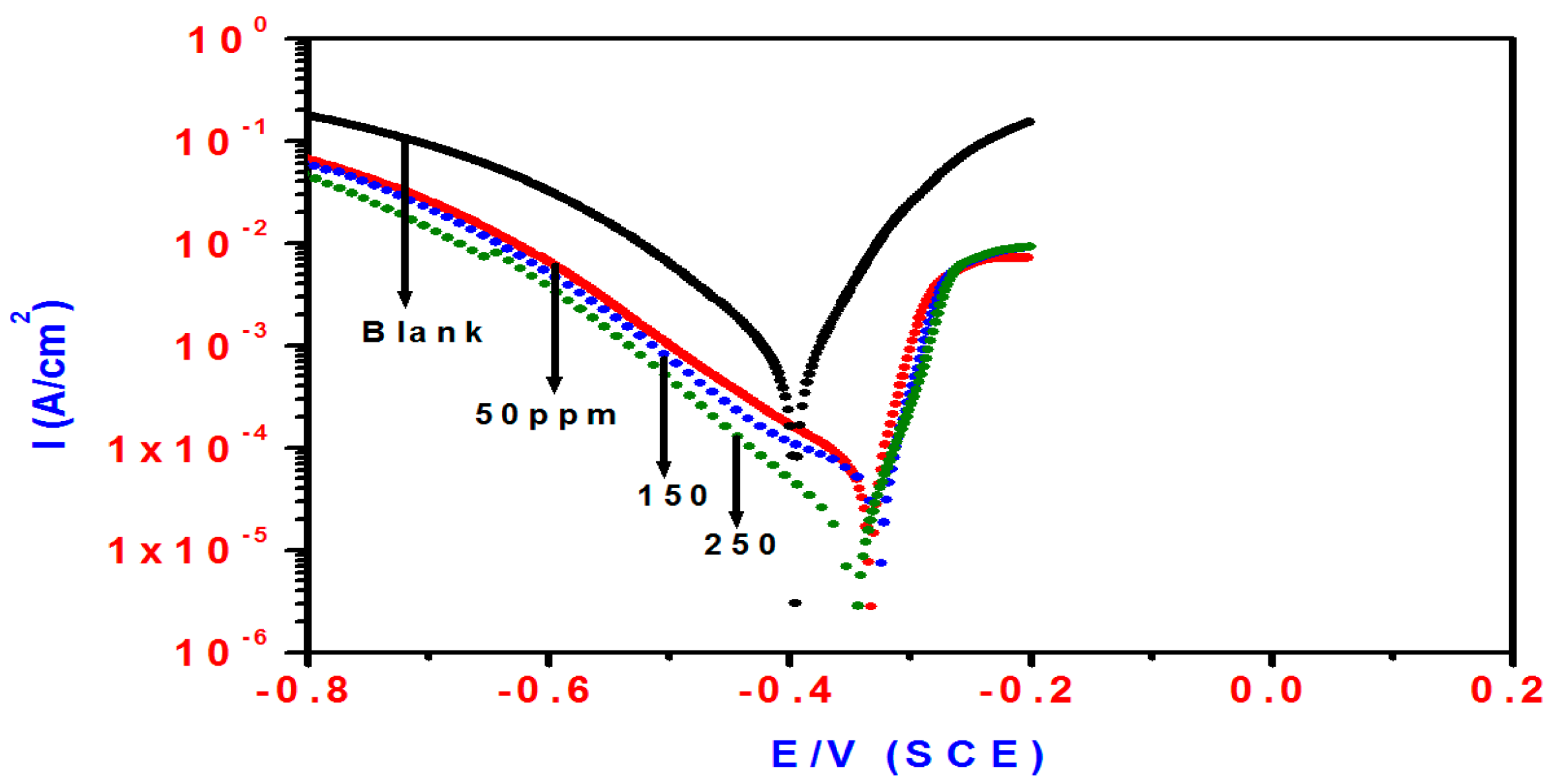 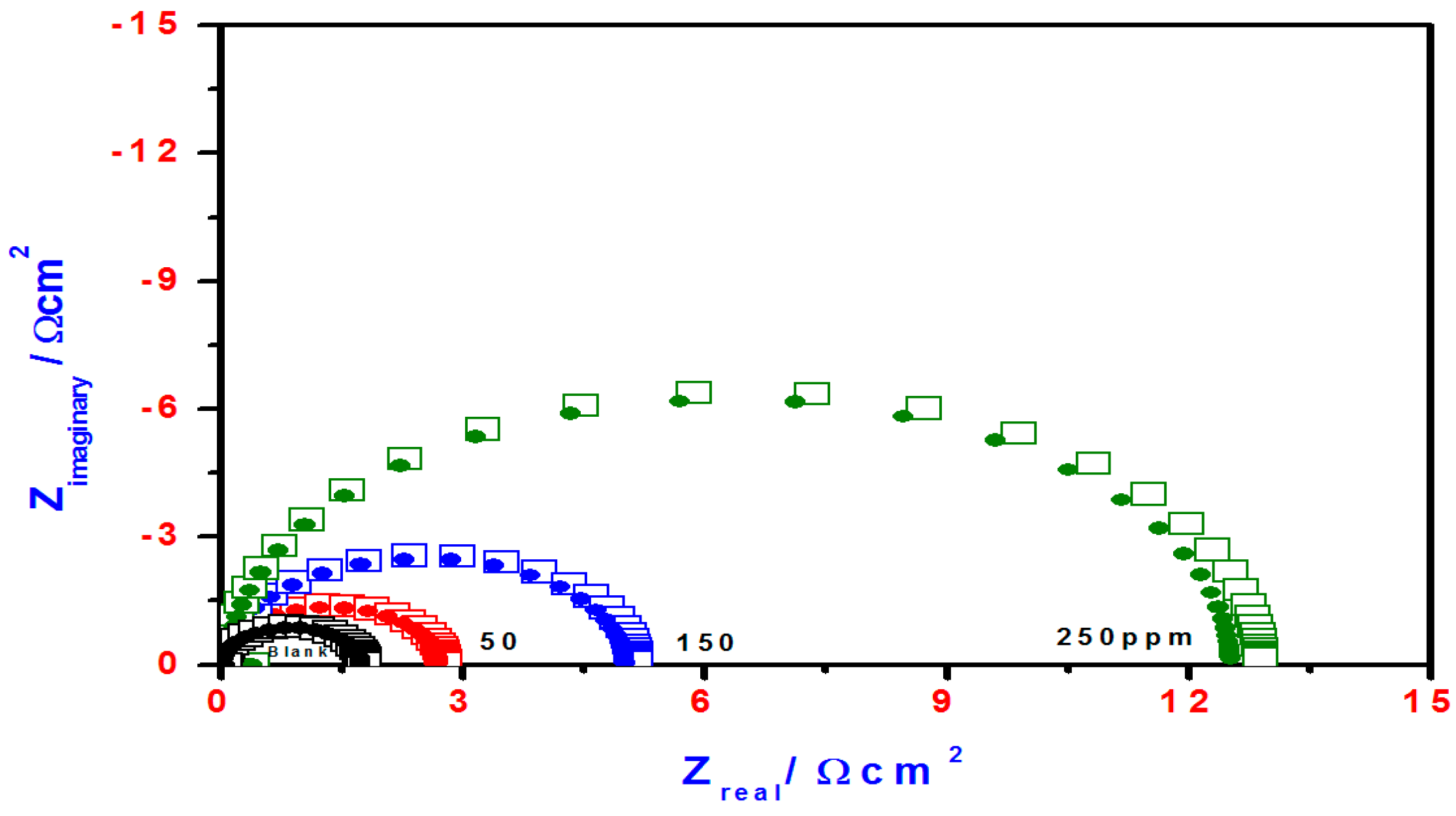 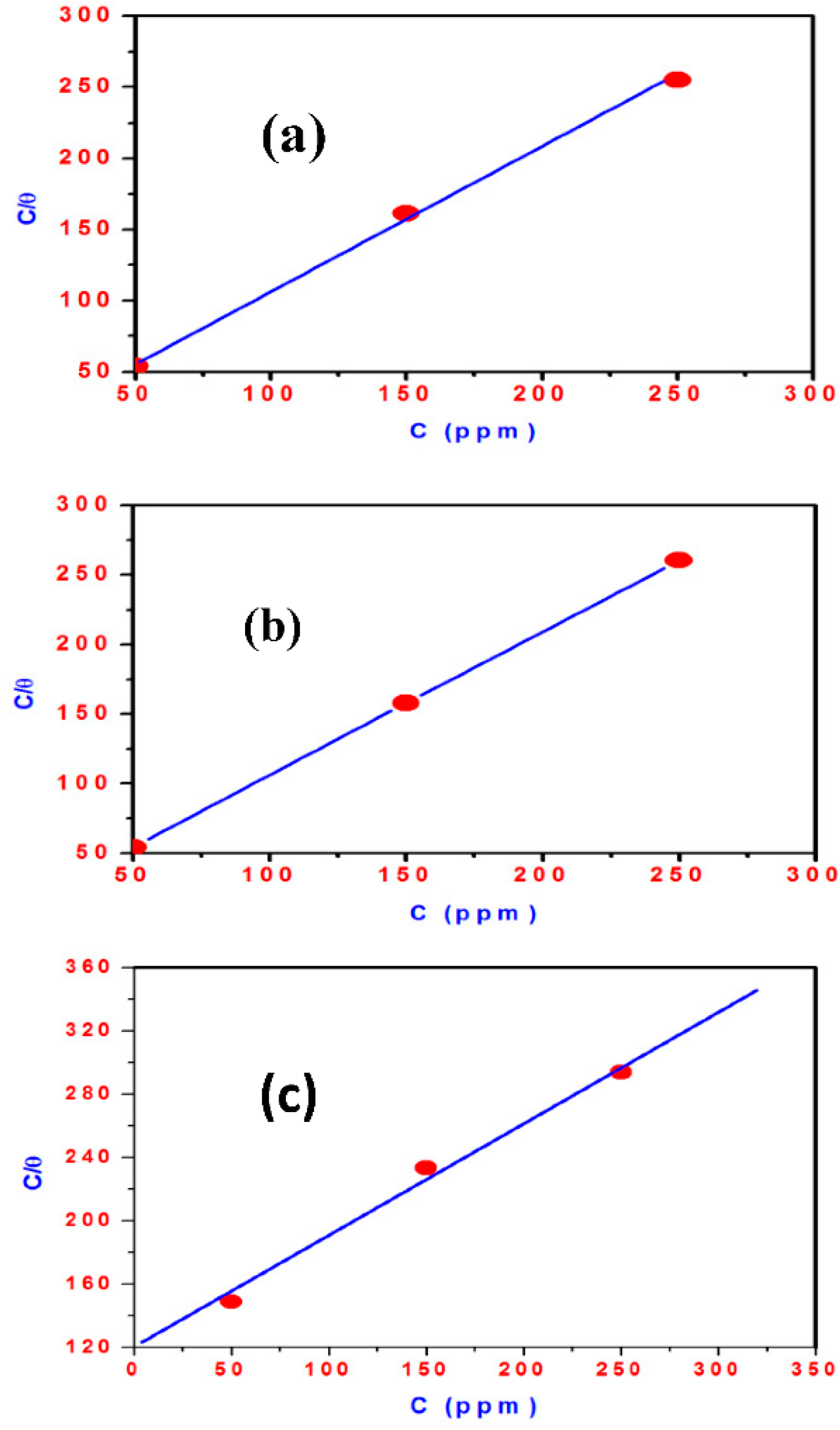 Table 1. The effect of T3Q, T3EA and T3AMPY concentrations on the IE% values for steel in acidic chloride solutions using electrochemical methods.