Since many glycoside compounds in natural products are hydrolyzed by intestinal microbiota when administered orally, it is of interest to know whether their pharmacological effects are derived from the glycoside itself or from the aglycone form in vivo. An interesting example is baicalin versus baicalein, the aglycone of baicalin, which is contained in some herbs from Labiatae including Scutellaria baicalensis Georgi and Scutellaria lateriflora Linne. The herbs have been extensively used for treatment of inflammatory diseases in Asia. Although there have been numerous reports regarding the pharmacological effects of baicalin and baicalein in vivo and in vitro, some reports indicated that the glycoside form would hardly be absorbed in the intestine and that it should be hydrolyzed to baicalein in advance for absorption. Therefore, the role of metabolism by intestinal microbiota should also be considered in the metabolism of baicalin. In addition, baicalin contains a glucuronide moiety in its structure, by which baicalin and baicalein show complex pharmacokinetic behaviors, due to the interconversion between them by phase II enzymes in the body. Recently, concerns about drug interaction with baicalin and/or baicalein have been raised, because of the co-administration of Scutellaria species with certain drugs. Herein, we reviewed the role of intestinal microbiota in pharmacokinetic characteristics of baicalin and baicalein, with regards to their pharmacological and toxicological effects. View Full-Text
Keywords: baicalin; baicalein; drug interaction; pharmacokinetics; intestinal microbiota baicalin; baicalein; drug interaction; pharmacokinetics; intestinal microbiota
►▼ Show Figures 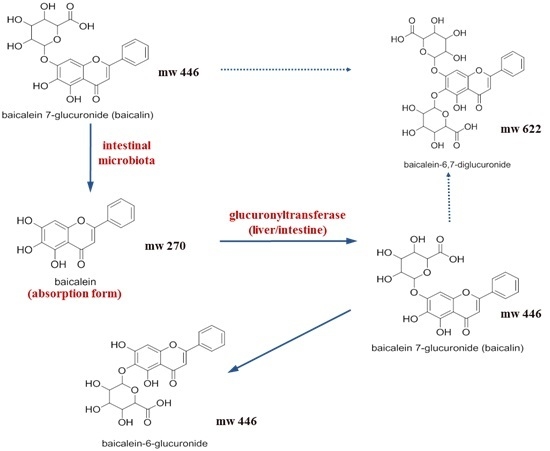