Extraction and Quantification of Bioactive Tyrian Purple Precursors: A Comparative and Validation Study from the Hypobranchial Gland of a Muricid Dicathais orbita
Previous Article in Journal

Synthesis of Bisindole Alkaloids from the Apocynaceae Which Contain a Macroline or Sarpagine Unit: A Review

Mosquito-borne diseases affect at least 500 million people around the world [1]. Dengue fever, mainly transmitted by the yellow fever mosquito (Aedes aegypti L.) and Asian tiger mosquito (Aedes albopictus Skuse), cause 50 million new infections and 24,000 deaths every year [2]. Malaria, mostly transmitted by Anopheles sinensis Wiedemann, used to be a horrible threat to Chinese people for a long period of time. As was reported by the World Health Organization (WHO) in the year of 2010, there were still 225 million people living under the threat of malaria annually [3]. Wuchereriasis and epidemic encephalitis B, causing significant morbidity and mortality, are primarily vectored by the house mosquito, Culex pipiens pallens Coquillett [4]. Currently, the main way to control mosquitoes involves application of synthetic pesticides, organophosphates (e.g., temephos, fenthion, and malathion), and insect growth regulators (e.g., diflubenzuron and methoprene) [5].
Plant-parasitic nematodes are serious worldwide threats to forestry and agriculture because of their wide range of host plants and short biological cycles [6]. The pine wood nematode, Bursaphelenchus xylophilus (Steiner and Buhrer) Nickle, causes pine wilt disease by inducing rapid wilting and leads to death of host pines [7]. The southern root-knot nematode, Meloidogynein congnita (Kofold and White) Chitwood, is one of the most devastating nematode groups, resulting in decreased quality and quantity in fruits, vegetables, and crops [8]. In the past, methods in integrated management of plant-parasitic nematodes have extensively relied on synthetic fumigant and non-fumigant nematicides [6,9].
However, synthetic larvicides and nematicides have shown some side effects, such as being toxic to humans and other nontarget organisms, causing soil and underground water pollution, disrupting biological control systems, and so on [10]. Therefore, it is urgent to research and develop environmentally acceptable larvicides and nematicides. Plants contain a rich source of bioactive chemicals, since many plants have been reported to possess larvicidal and nematicidal activities [8,11,12,13,14].
During our mass screening for bioactive natural products from Chinese medicinal herbs or wild plants, Orixa japonica Thunb. (Rutaceae) showed potential larvicidal and nematicidal activity. Orixa japonica is a shrub distributed in China (Anhui, Fujian, Guizhou, Henan, Hubei, Hunan, Jiangsu, Jiangxi, Shaanxi, Sichuan, Yunnan, and Zhejiang provinces), Japan, and Korea [15]. The whole plant has been used for the treatment of cough, rheumatism, malaria, and dysentery [16]. According to the former studies, its extracts or constituents possess pharmacological and biological activities [17,18,19]. Chemical investigations revealed that several quinoline alkaloids (evolitrine, kokusaginine, orixinone, skimmianine, etc.), coumarins (bergapten, imperatorin, and xanthotoxin), and terpenoids (friedelin, limonene, and γ-terpinene) have been isolated and identified from this plant [10,18]. In continuation of our study for other structural types of bioactive compounds from the ethanol extract of O. japonica root barks, we used the method of repeated column chromatographic separation to yield a new pyrrolidine alkaloid, (Z)-3-(4-hydroxybenzylidene)-4-(4-hydroxyphenyl)-1-methylpyrrolidin-2-one. To our knowledge, this is the first report of a pyrrolidine alkaloid that has been isolated and identified from O. japonica. This paper deals with the isolation and structure determination of this compound, as well as its bioactivities against the three species of mosquitoes and the two species of plant-parasitic nematodes.

The isolated pyrrolidine alkaloid was tested for its larvicidal activity against the fourth instar larvae of Ae. aegypti, An. sinensis, and C. pipiens pallens. The fourth instar larvae of An. sinensis was the most susceptible with a 24 h LC50 value of 49.91 μg/mL (Table 2), while C. pipiens pallens and Ae. aegypti were 3.2 and 4.7 times less sensitive than An. sinensis, respectively. However, such differences in sensitivity to chemicals need to be further investigated. When compared with a positive control, commercial rotenone, the isolated compound was 62–85 times less toxic to the three species of mosquitoes.
The isolated alkaloid also possessed nematicidal activity against juveniles of Bursaphelenchus xylophilus and Meloidogynein congnita with 72 h LC50 values of 391.50 μg/mL and 134.51 μg/mL (Table 3), respectively; M. incongnita was 2.9 times more susceptible than B. xylophilus. However, this susceptibility difference is not yet clear. In comparison to a positive control, commercial avermectin, the isolated compound was 5000 times less toxic to the two species of nematodes.
On the basis of a literature survey, compounds of the pyrrolidine type have exhibited various biological activities, such as antioxidative, antifungal, and antibacterial activity; antitumor properties; cytotoxicity; and glycosidase inhibitory; and platelet aggregation inhibitory effects [22,23,24]. It is worth mentioning that pyrrolidines have been found to possess larvicidal activity against Ae. aegypti at a concentration less than 140 ppm [25]. Pyrrolidines also possess considerable insecticidal activity when evaluated against termite workers [26]. Moreover, pyrrolidine alkaloids have also been found to possess DNA-binding affinity and cytotoxicity [27], which might be the mechanism of action of the new alkaloid against larval mosquitoes and plant-parasitic nematodes. The above findings suggested the new alkaloid with a pyrrolidine ring isolated from the ethanol extract of O. japonica has the potential to be developed into an alternative larvicide and nematicide.

Eggs of Ae. aegypti and An. sinensis and egg masses of C. pipiens pallens were obtained from the Department of Vector Biology and Control, National Institute for Communicable Disease Control and Prevention, Chinese Center for Disease Control and Prevention. Adult mosquitoes were reared in a cage (60 cm × 30 cm × 30 cm) which was placed in a growth chamber (14:10 h light:dark (L:D), 26–28 °C, 70%–80% RH). Adults were maintained on a 10% glucose solution and were allowed to blood-feed on live mice. Adults of both Ae. aegypti and An. sinensis deposited on strips of moistened filter paper, which were kept in glass beakers. Paper strips with Ae. aegypti eggs were kept wet for 24 h and then dehydrated, while An. sinensis eggs need to be kept wet. However, egg masses of C. pipiens pallens were oviposited in distilled water directly. Then, the egg masses were transported to a clean, white porcelain basin containing distilled water. Eggs or egg masses were kept in distilled water under the same conditions described above. Mosquito larvae were provided with a mixture of pig liver, fish food, and yeast powder (1:1:1) and were not utilized for experiments until they reached the fourth instar.

Colonies of B. xylophilus were maintained on Botrytis cinerea cultures. The fungus B. cinerea was cultured on potato dextrose agar (PDA) in a growth chamber (25–28 °C in dark). When B. cinerea was fully grown on PDA, B. xylophilus were collected through the modified Baermann funnel technique, washed with a mixture of 0.1% streptomycin sulfate and 0.002% actinone three times to remove any surface bacterial or fungal contaminants and then inoculated on the plate [28]. The plate was maintained in the growth chamber (25–28 °C in dark) until the fungal mycelium were completely consumed by B. xylophilus. Then, B. xylophilus were collected, washed thoroughly with sterilized distilled water, and used for bioassays immediately. All the bioassays were performed under laboratory conditions at 25–28 °C.
Eggs of M. incongnita were extracted from infected roots of tomato (Lycopersicone sculentum Mill.). All the tomato plants were reared in a growth chamber (16:8 h L:D, 25–28 °C, 75%–80% RH). When they reached a five-leaf stage, the tomatoes were used for inoculations. After 42 days, infected tomatoes were uprooted and the roots were washed free of soil with distilled water. Egg masses were hand-picked using sterilized tweezers from infected roots and then placed on a mesh nylon filter (openings 30 μm in diameter) [29]. J2s that passed through the filter were collected daily and used for bioassays immediately.

All bioactivity assays were performedunder laboratory conditions at 25–28 °C. The compound was dissolved in ethanol and diluted with tap water. The larvicidal bioassays were as recommended by WHO [30]. Solutions (250 mL) of the tested material at various concentrations were placed in glass beakers, and then 10 larvae were delivered toeach beaker. Each test was composed of six concentrations with five replicates. Commercial rotenone (purchased from Aladdin-Reagent Company, Shanghai, China) served as a positive control and ethanol was used as a negative control. Both treated and control larvae were placed in the growth chamber where mosquitoes were reared. Mortality recordings were taken after 24 h of exposure. Larvae that showed no movements were considered to be dead.
The standard nematode suspensions were prepared by appropriate dilution with sterilized distilled water to get approximately 100 juveniles/mL. Then, each well of 24-well tissue culture plates were added with 500 μL standard juvenile suspension. Numbers of active juveniles in every well were counted under a stereoscope at 10× and 5× before 500 μL stock solution was added to the corresponding well. However, the final concentration of ethanol in each treatment never exceeded 1% (by volume) [31]. Plates were then covered with “Xuan paper” (a high-quality rice paper made for traditional Chinese painting and calligraphy) to avoid evaporation. Each test was composed of five concentrations with three replicates. Commercial avermectin (purchased from Aladdin-Reagent Company, Shanghai, China) was used as a positive control, and distilled water containing ethanol (1%, by volume) served as a negative control. Both treated and control juveniles were placed in a growth chamber at 25–28 °C in dark. Mortality recordings were taken 72 h after treatment. Juveniles that showed no movements when stimulated with a fine needle were considered to be dead.

A new pyrrolidine alkaloid was obtained from ethanol extract of O. japonica root barks, identified as (Z)-3-(4-hydroxybenzylidene)-4-(4-hydroxyphenyl)-1-methylpyrrolidin-2-one. It possessed larvicidal activity against fourth instar larvae of Ae. aegypti, An. sinensis, and C. pipiens pallens, as well as nematicidal activity against juveniles of M. incognita and B. xylophilus. However, further investigations should be conducted to explore its action mechanism and safety issues, so as to develop a fundamental structure with potential bioactivities.

This project was supported by National Key Technology Research and Development Program of Ministry of Science and Technology of China (Grant No. 2014BAD23B02). We thank Liu Q.R. from the College of Life Sciences, Beijing Normal University, Beijing 100875, for the identification of the investigated plant. 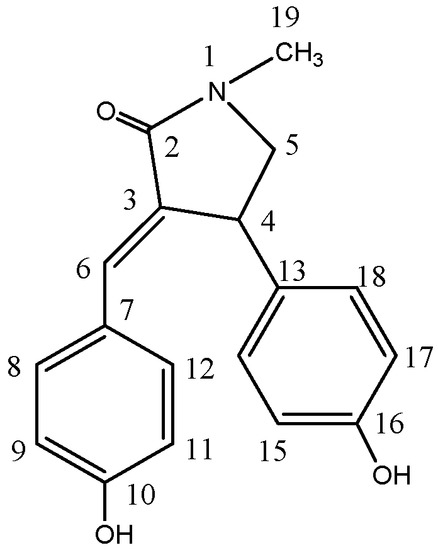 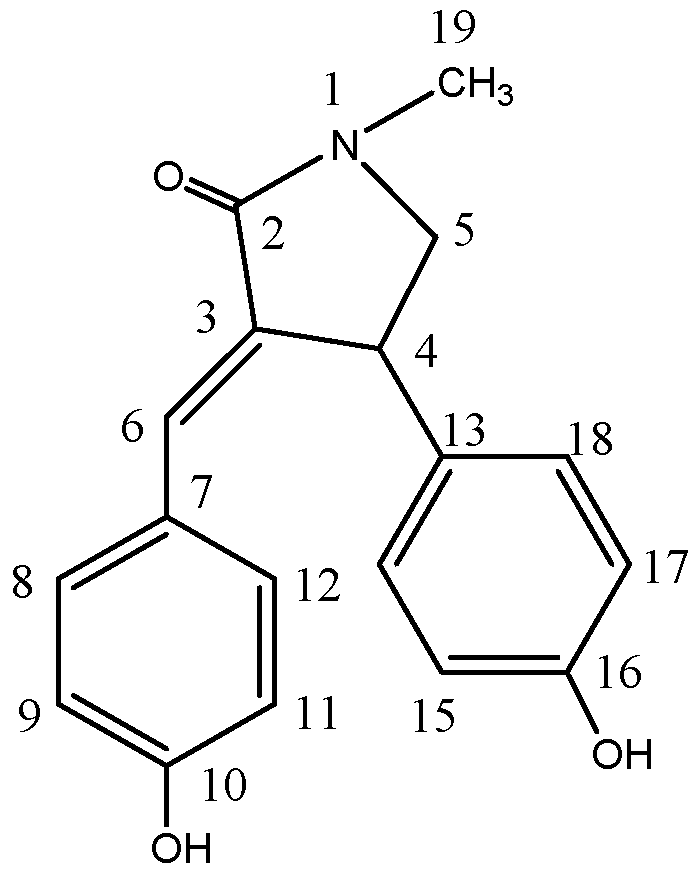 Table 2. Larvicidal activity of the isolated pyrrolidine alkaloid against the fourth instar larvae of Aedes aegypti, Anopheles sinensis, and Culex pipiens pallens.
* Values were significant at the p < 0.05 level.