Organic light emitting devices (OLEDs) have been proven successful in the commercial world, including uses in displays and lighting. If the field continues to progress at its current and rapid pace, OLEDs will soon become a mainstay of our technology. However, the future holds even greater promise for this technology, with an entirely new generation of low-cost, lightweight, and flexible electronic devices on offer. External quantum efficiency (EQE) is one of the key parameters for the application of OLEDs [1]. In an OLED, following electron and hole recombination, two types of excitons—singlets and triplets—are generated at a ratio of 1:3, determined by quantum spin-statistics. Fluorescent OLEDs employ spin-antisymmetric singlets for emission, which provides an internal quantum efficiency limit of 25%, and the remaining 75% of the electrically-generated energy is dissipated via non-radiational methods. As a result, the highest theoretical EQE is restricted to 5% after considering a light out-coupling constant of ∼20% in devices [2,3].
To achieve OLEDs with very high EQEs, many efforts to utilize triplet excitons have been made in order to break the EQE limit of 25%. It has been demonstrated that electro-phosphorescent organic light-emitting devices (PHOLEDs) can yield a 100% internal quantum efficiency [4]. Recently, high-efficiency thermally-activated delayed fluorescent (TADF) emitters have been developed as another way to increase the efficiency of OLEDs [3]. TADF OLEDs harvest both singlet and triplet excitons to provide nearly 100% of the internal conversion of charge into light. In this case, TADF emitters with a small singlet–triplet splitting energy facilitate the thermally-activated reverse intersystem crossing to the singlet manifold, and exerts comparable performance to phosphorescent OLEDs [5,6,7,8]. Kido et al. developed highly-efficient, solution-processed OLEDs using a TADF emitter1,2,3,5-tetrakis(carbazol-9-yl)-4,6-dicyanobenzene (4CzIPN), as a green emitter [9]. The optimized device showed a very low turn-on voltage of 2.5 V at 1 cd/m2, and a relatively high EQE of 16%. They observed the formation of exciplex at the host/electron-transporting layer (ETL) interface, which greatly reduced the operating voltage. This work obtained an outstanding efficiency of solution-processed OLEDs. However, the charge transport and recombination processes in this mixed system are still unintelligent, and the performance roll-off was still remarkable under a high current density. Therefore, it is necessary to fully investigate and understand the fundamental mechanisms in this kind of operating OLED in order to achieve a high performance.
Transient electroluminescence (EL) measurement [10] has been proven to be an effective and profitable method for the study of information on injecting carriers. When OLEDs are driven by the pumping signal of the periodic square wave, instead of being driven by DC bias as usual, the devices provide a delayed luminescence after the end of the forward bias pulse, which is known as delayed EL. Transient EL can be used to analyze the formation of excitons in host–guest systems [11], energy transfer processes [12], and carrier transportation [13] in OLEDs. In this work, we have systematically studied a series of highly-efficient, solution-processed TADF OLEDs with the structure ITO/PEDOT: PSS/4CzIPN doped 4,4′-N,N′-dicarbazolylbiphenyl (CBP, 35 nm)/bis-4,6-(3,5-di-4-pyridylphenyl)-2-methylpyrimidine (B4PyMPM, 55 nm)/lithium fluoride (LiF, 6 Å)/Al (100 nm), and applied transient electroluminescence measurement in order to investigate the fundamental and physical mechanisms of the operating devices.

The structure of the TADF devices and the principal materials used in this work are shown in Figure 2. CBP, which exhibits bipolar transmission capability, was used as the host for 4CzIPN, a typical TADF molecule [3]. A wide energy gap electron transporter, B4PyMPM, was used as the ETL. The emitting layer (EML) was spin-coated from a chlorobenzene solution (10 mg/mL) in a nitrogen atmosphere; the ETL and cathode were fabricated using thermal evaporation at a deposition rate of 1–2 Å/s in vacuum, with a pressure of about 2 × 10−4 Pa. Doping concentrations of 4CzIPN in CBP are 1, 5, 10, and 20 wt %, respectively. The transient electroluminescence properties were detected using a Zolix Instruments Model PMTH-S1C1-CR131 Photomultiplier Tube. The time evolution of delayed light emission was recorded with a Tektronix Model DPO 4104 digital phosphor oscilloscope. All measurements were performed at room temperature under an atmospheric environment.

We fabricated solution-processed OLEDs using a TADF emitter 4CzIPN-doped CBP/B4PyMPM system. It is worth noting that the formation of exciplex at the host/ETL interface can greatly reduce the operating voltage, and thus significantly improves device performance. We also studied the corresponding transient EL decay of this system. The results provide direct evidence to identify the dominant operating mechanism in TADF-based OLEDs. The main mechanism of the electroluminescence of the 4CzIPN-doped CBP/B4PyMPM system is the injected carrier recombination of 4CzIPN. The energy-transfer process in these doped devices is neglected, especially when the concentration of 4CzIPN is high. 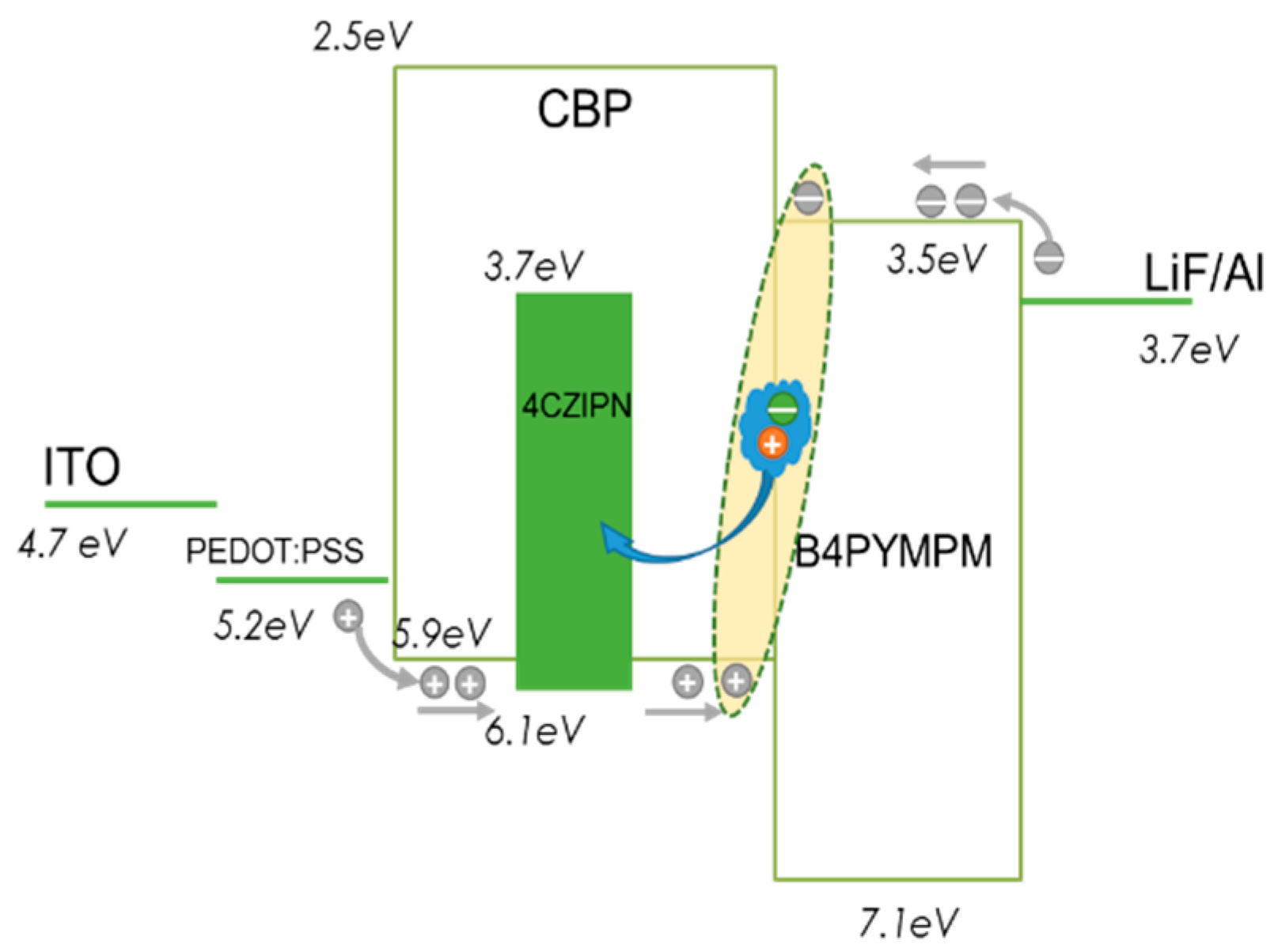