A variety of selenium compounds were proven to be useful reagents and catalysts for organic synthesis over the past several decades. The most interesting aspect, which emerged in recent years, concerns application of hydroperoxide/selenium(IV) oxide and hydroperoxide/organoselenium catalyst systems, as “green reagents” for the oxidation of different organic functional groups. The topic of oxidations catalyzed by organoselenium derivatives has rapidly expanded in the last fifteen years This paper is devoted to the synthetic applications of the oxidation reactions mediated by selenium compounds such as selenium(IV) oxide, areneseleninic acids, their anhydrides, selenides, diselenides, benzisoselenazol-3(2H)-ones and other less often used other organoselenium compounds. All these compounds have been successfully applied for various oxidations useful in practical organic syntheses such as epoxidation, 1,2-dihydroxylation, and α-oxyfunctionalization of alkenes, as well as for ring contraction of cycloalkanones, conversion of halomethyl, hydroxymethyl or active methylene groups into formyl groups, oxidation of carbonyl compounds into carboxylic acids and/or lactones, sulfides into sulfoxides, and secondary amines into nitrones and regeneration of parent carbonyl compounds from their azomethine derivatives. Other reactions such as dehydrogenation and aromatization, active carbon-carbon bond cleavage, oxidative amidation, bromolactonization and oxidation of bromide for subsequent reactions with alkenes are also successfully mediated by selenium (IV) oxide or organoselenium compounds. The oxidation mechanisms of ionic or free radical character depending on the substrate and oxidant are discussed. Coverage of the literature up to early 2015 is provided. Links have been made to reviews that summarize earlier literature and to the methods of preparation of organoselenium reagents and catalysts. View Full-Text
Keywords: oxidation; catalysts; hydrogen peroxide; t-butyl hydroperoxide; selenium(IV) oxide; diselenides; seleninic acids; peroxyseleninic acid; benzisoselenazol-3(2H)-ones; ebselen oxidation; catalysts; hydrogen peroxide; t-butyl hydroperoxide; selenium(IV) oxide; diselenides; seleninic acids; peroxyseleninic acid; benzisoselenazol-3(2H)-ones; ebselen
►▼ Show Figures 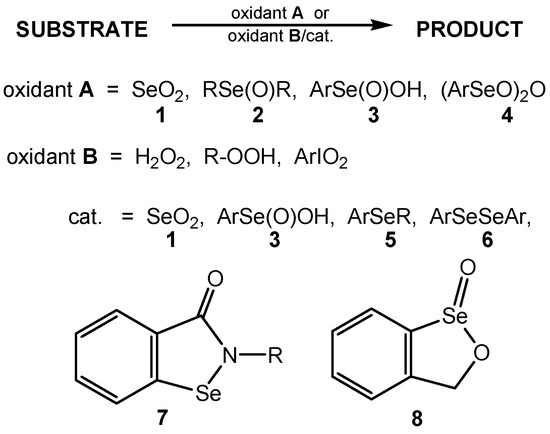