Synthesis and Pharmacophore Modelling of 2,6,9-Trisubstituted Purine Derivatives and Their Potential Role as Apoptosis-Inducing Agents in Cancer Cell Lines

Although considerable effort and progress has been made in the search for new anticancer drugs and treatments in the last several decades, cancer remains a major public health problem and one of the major causes of death worldwide. Many sources, including plants, animals, and minerals, are of interest in cancer research because of the possibility of identifying novel molecular therapeutics. Moreover, structure-activity-relationship (SAR) investigations have become a common way to develop naturally derived or semi-synthetic molecular analogues with improved efficacy and decreased toxicity. In 2012, approximately 138 molecules from marine sources, including isolated compounds and their associated analogues, were shown to be promising anticancer drugs. Among these, 62% are novel compounds. In this report, we review the marine compounds identified in 2012 that may serve as novel anticancer drugs. View Full-Text
Keywords: anticancer molecules; marine origin; synthetic derivatives; cancer anticancer molecules; marine origin; synthetic derivatives; cancer
►▼ Show Figures 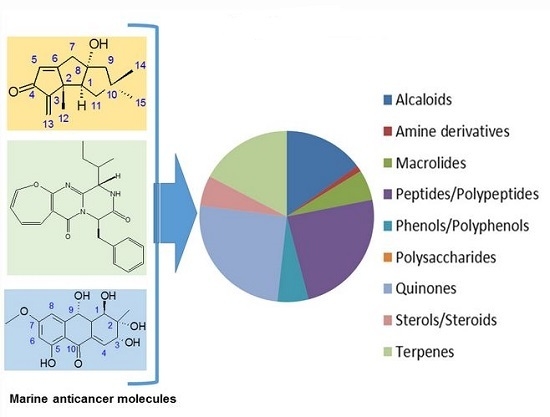