Understanding the Physicochemical Properties of Mitragynine, a Principal Alkaloid of Mitragyna speciosa, for Preclinical Evaluation

Varied pharmacological responses have been reported for mitragynine in the literature, but no supportive scientific explanations have been given for this. These studies have been undertaken without a sufficient understanding of the physicochemical properties of mitragynine. In this work a UV spectrophotometer approach and HPLC-UV method were employed to ascertain the physicochemical properties of mitragynine. The pKa of mitragynine measured by conventional UV (8.11 ± 0.11) was in agreement with the microplate reader determination (8.08 ± 0.04). Mitragynine is a lipophilic alkaloid, as indicated by a logP value of 1.73. Mitragynine had poor solubility in water and basic media, and conversely in acidic environments, but it is acid labile. In an in vitro dissolution the total drug release was higher for the simulated gastric fluid but was prolonged and incomplete for the simulated intestinal fluid. The hydrophobicity, poor water solubility, high variability of drug release in simulated biological fluids and acid degradable characteristics of mitragynine probably explain the large variability of its pharmacological responses reported in the literature. The determined physicochemical properties of mitragynine will provide a basis for developing a suitable formulation to further improve its solubility, stability and oral absorption for better assessment of this compound in preclinical studies.
Keywords: mitragynine; partition coefficient; pharmacology; pKa/pH; solubility; stability mitragynine; partition coefficient; pharmacology; pKa/pH; solubility; stability

Mitragyna speciosa is an ethnomedicinal tree native to Malaysia, where it is named “Biak” or “Ketum”. It has traditionally been consumed as a leaves decoction for its stimulant effects to counter fatigue. Additionally, ketum has been employed, as a leaves poultice, to treat fever, diarrhea and for wound healing [1]. The other reported pharmacological properties of M. speciosa, include anesthetic, antinociceptive, analgesic and stimulant effects [2,3]. Recently, in the northern states of peninsular Malaysia that border Thailand, the consumption of ketum as a decoction has been popular [4]. Indeed, studies at these sites reported that ketum is widely sold as a decoction and regularly consumed by drug users to manage opiate withdrawal symptoms. However, a recent field study, suggests that ketum has abuse liability and can itself cause withdrawal symptoms following discontinuation after extended use [5]. Further studies in rodents suggest that mitragynine possesses potential threat of abuse beside its wide spectrum of therapeutic effects [6]. The usage of ketum is not limited only to the country of its origin. Over the past decade there has also been a growing interest in ketum usage outside this region as evidenced by the number of advertisements for its sale on the Internet [7].
In general, the pharmacological effects of ketum are mainly attributed to its principal alkaloid mitragynine (Figure 1). Since then several pharmacological studies have been undertaken to evaluate this assertion objectively. However the mitragynine dose employed in these studies; analgesic (30–200 mg/kg) [8,9,10] pharmacokinetics (20–50 mg/kg) [11,12,13,14], toxicity (200–477 mg/kg) [9,10] varied largely across rodent species. Others reported no toxicity even at mitragynine dose levels of 800–900 mg/kg in rodents [15]. 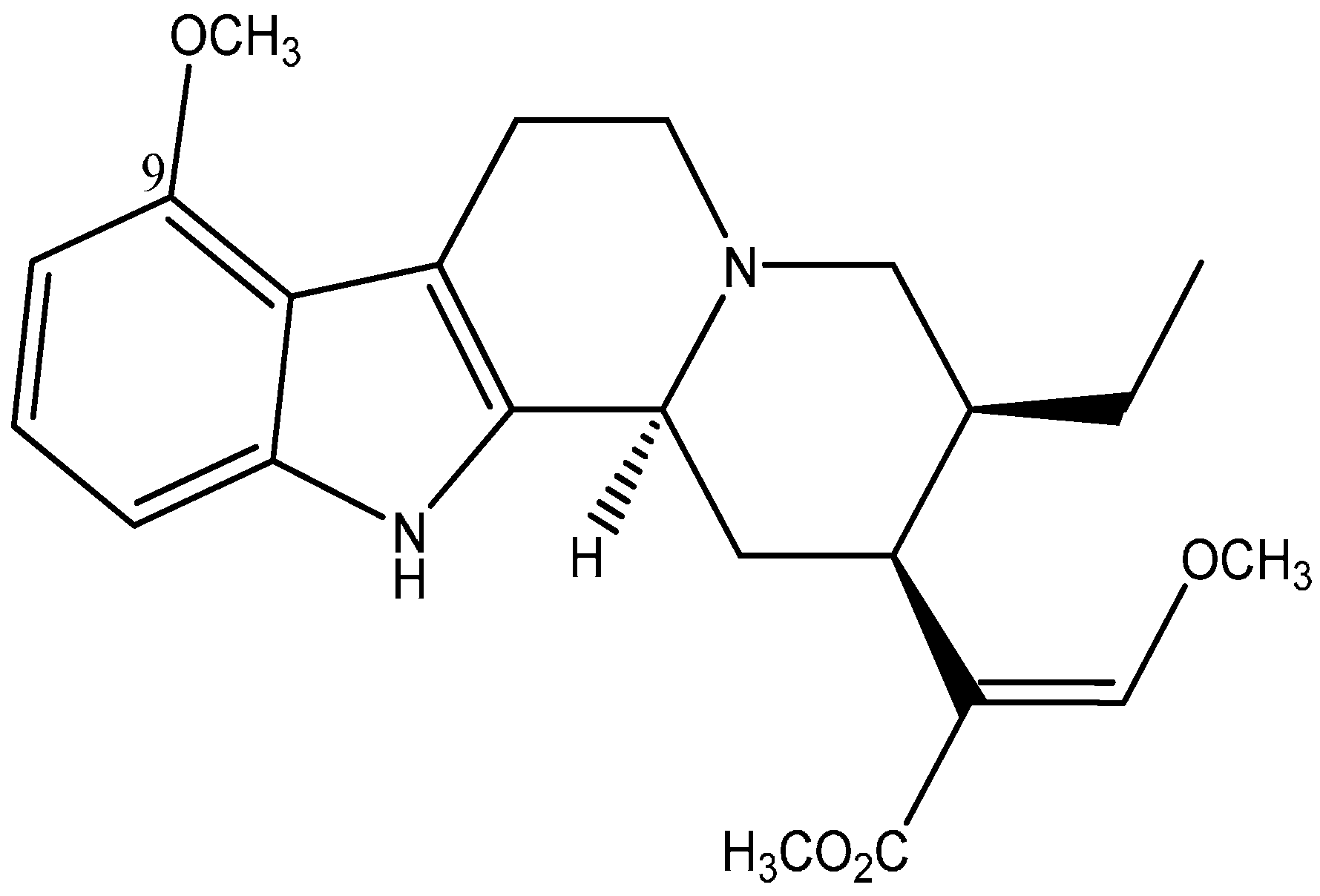 The wavelength of the maximum difference between ionized and neutral species of mitragynine in the corresponding UV spectrum was found to be at 248 nm. The pKa of mitragynine was 8.11 ± 0.11 and 8.08 ± 0.04 by the conventional UV and microplate spectrophotometer methods, respectively (Table 1).

Table 2. Interday repeatability of the pKa value.
As for HPLC validation study, the within day and day to day HPLC precisions and accuracies were found to be less than 5%. The calibration curve of mitragynine was linear over the concentration range of 0.16–20 μg/mL (r2 > 0.999). The lower limits of detection and quantification were 0.1 μg/mL and 0.16 μg/mL, respectively. This method was used for quantification of mitragynine in partition coefficient study. The n-octanol/water partition coefficients (logP and logD) obtained under various conditions are detailed in Table 3. Mitragynine has logP and logD (pH 4) values of 1.70 and 0.78, respectively.

Table 3. The n-octanol-water partition coefficient of mitragynine.
Note: *: logP; **: logD.
Table 4 shows the results of pure mitragynine stability after incubation in SGF and SIF respectively. In SGF study, from the 20 min time point onwards, the relative deviation (%) of mitragynine was greater than 20%.

Table 4. Mitragynine stability in SGF and SIF (with enzymes).
In contrast, for the SIF study throughout the incubation period the relative deviations (%) of mitragynine was found to be no greater than ±5%.The drug dissolution profiles over time for capsule filled with mitragynine standard in SIF and SGF are shown in Figure 2. In SGF, mitragynine dissolution was inconsistent at early dissolution time points and only 80% of the drug was released up to 2 h. The RSD of >50% was observed at early dissolution time points (5 to 15 min) but for the rest of the period the RSD was <20%. As for SIF, the drug release was very slow and incomplete; as only 22% of the drug was released up to 2 h. A RSD of >20% was noted throughout the dissolution period.

3.1.2. Extraction and Isolation of Mitragynine

Leaves of M. speciosa were collected from Perlis, Malaysia and were identified by a botanist in the School of Biological Sciences, Universiti Sains Malaysia (Penang, Malaysia). A voucher specimen (No 11074) was deposited at the herbarium of the School of Biological Sciences, USM for further reference. Mitragynine was isolated following procedures as described previously [32].

pKa determination was carried out using conventional UV and microplate spectrophotometer methods. Acetic acid, tris base and sodium carbonate were used to prepare stable buffers in the pH range of 3 to 12. The buffers were prepared to give a final buffer molarity of 0.01 M. Either NaOH or HCl were used for pH adjustment of the various buffers, whose ionic strength was kept constant at 0.02 by addition of NaCl.

Five mL aliquots of buffer of various pH were transferred into separate tubes. To each tube, mitragynine stock solution in acetonitrile (4 mg/mL) was added to give a final drug concentration of 20 µg/mL. The percentage of organic content in final buffer preparation was kept below 1%. The prepared solutions were immediately scanned in the range of 200–400 nm.

Stock solution of mitragynine at 0.5 mg/mL was prepared in acetonitrile. Ten microliters of the stock solution was transferred into individual test tubes and diluted with 1.0 mL buffer of various pH to give a final concentration of 5 μg/mL. For absorbance spectrum analysis, 250 μL of the various pH buffer solutions spiked with drug were placed in a 96-well quartz UV-transparent microplate and immediately scanned in the range of 200–400 nm at a scanning rate of 200 nm/s in triplicates. The pKa was calculated with equation pKa = pH + log (d − dm/di − d), for basic compound, where di is the absorbance of the ionised species, d is the absorbance of the solution tested and dm is the absorbance of the neutral species [17].

For solubility studies, an excess of mitragynine was added to 1.0 mL each of distilled water or buffers at pH 4, 7 and 9. The test tubes were placed in a water bath shaker at 37 degrees Celsius at 100 cycles/min for 48 h until equilibrium. The samples were centrifuged at 3000 rpm for 5 min and supernatant was taken for quantification of mitragynine by HPLC-UV. For stability studies, analogous buffers were used, but they were spiked with mitragynine in acetonitrile to give a concentration of 20 µg/mL (organic content was kept below 1%). A 0.1 mL aliquot was collected from each buffer system at intervals of 0, 0.5, 6.0 and 24.0 h for determination of mitragynine. Mitragynine concentrations were expressed as percentage recovered. All experiments were performed in triplicates.

In this experiment the stability of pure mitragynine standard in simulated gastric fluid (SGF) and simulated intestinal fluid (SIF) was determined. The SGF was prepared according to USP specifications. For SGF, 2.0 g sodium chloride and 3.2 g pepsin (from porcine stomach mucosa) were dissolved in 7.0 mL hydrochloric acid. Then water was added to make up 1000 mL solution. The SGF pH was around 1.2. For the SIF, 6.8 g monobasic potassium phosphate was dissolved in 250 mL water. To this, 77 mL 0.2 N sodium hydroxide 500 mL water and 10.0 g pancreatin (from porcine pancreas) was added and mixed. The SIF solution was adjusted to pH 6.8 with either 0.2 N sodium hydroxide or 0.2 N hydrochloric acid and further diluted with distilled water to 1000 mL. The stability of mitragynine in SIF and SGF experiments was carried out in 10 mL volumetric flasks respectively. One hundred microliters (100 µL) of the drug solution (2 mg/mL) was spiked into flasks containing preheated SGF and SIF (10 mL) at 37 °C respectively (organic content was kept below 1%). The flask was placed in a 37 °C shaking water bath. For SGF study 400 µL of samples were drawn at 0 and thereafter at 10, 20, 30, 40, 50, 60, 70, 80 and 90 min after onset of the experiment. The samples were collected into micro-centrifuge tubes and centrifuged at 9000 rpm for 10 min and the supernatants were transferred into test tubes. After that, 150 uL of the supernatant was diluted with acetonitrile (1:1) and injected into HPLC. The similar procedure was carried out for SIF but the sampling time was extended to 3 h (e.g., 120, 180 min). Both SGF and SIF samples were analyzed in triplicates. The relative difference (RD) between the amount of mitragynine added at the beginning and that determined at the different intervals of the incubation period was calculated as follows:
RD = (Ca − Cb)/Ca × 100%
where Ca is the amount of drug found at the zero time point and Cb is the amount found at the end of incubation. It gives a measure of the extent of any degradation of the drug in the presence of the gastrointestinal fluids.

3.3. In Vitro Release Test of Mitragynine from Capsules Filled with Mitragynine Pure Standard

Hard shell gelatin capsules filled with mitragynine pure standard were used in the in vitro dissolution study. In order to characterize the release of mitragynine, drug release profile was generated, in which mitragynine release values were determined as a function of time. The US pharmacopoeia I (basket) method was used for the in vitro dissolution study. SGF (pH 1.2) and SIF (pH 6.8) were prepared without enzymes [34]. These media were used for the dissolution study, respectively. The capsule filled with mitragyine was introduced into 500 mL of dissolution medium. The capsule was agitated at 50 rpm at 37 °C. An aliquot (1 mL) of sample was withdrawn at predetermined time intervals of 5, 10, 15, 30, 40, 60, 90 and 120 min after onset of the dissolution. The samples were filtered through 0.45 um PTFE syringe filters, diluted with ACN (1:1) and the drug concentration was determined by the validated RP-HPLC-UV method. Samples were analyzed along with QC samples.

In the present work, our findings indicated that mitragynine is a weak base, with intermediate lipophilicity, poorly soluble in water and basic media, highly soluble in acidic media, but acid degradable. It is found to be unstable in SGF and stable in SIF but poorly goes into solution in SIF.These findings will assist investigators towards designing a more appropriate formulation for preclinical studies that mitigate the problems associated with the poor absorption and stability of mitragynine. It is imperative to establish a more realistic preclinical assessment of the compound before one can make a correct inference from animal studies for human safety risk prediction.

Universiti Sains Malaysia, Research University Grant No. 1001/CDADAH/815089 was used to finance this study. The Ministry of Education, Malaysia funded Suhanya Parthasarathy through MyPhD programme. Gratitude goes to Muneeshwaran Vishnu and Zulkeflee Ismail for technical assistance and to V. Vemala Devi for the editorial work.