Authentication of Cordyceps sinensis by DNA Analyses: Comparison of ITS Sequence Analysis and RAPD-Derived Molecular Markers

Cordyceps sinensis is an endoparasitic fungus widely used as a tonic and medicinal food in the practice of traditional Chinese medicine (TCM). In historical usage, Cordyceps specifically is referring to the species of C. sinensis. However, a number of closely related species are named themselves as Cordyceps, and they are sold commonly as C. sinensis. The substitutes and adulterants of C. sinensis are often introduced either intentionally or accidentally in the herbal market, which seriously affects the therapeutic effects or even leads to life-threatening poisoning. Here, we aim to identify Cordyceps by DNA sequencing technology. Two different DNA-based approaches were compared. The internal transcribed spacer (ITS) sequences and the random amplified polymorphic DNA (RAPD)-sequence characterized amplified region (SCAR) were developed here to authenticate different species of Cordyceps. Both approaches generally enabled discrimination of C. sinensis from others. The application of the two methods, supporting each other, increases the security of identification. For better reproducibility and faster analysis, the SCAR markers derived from the RAPD results provide a new method for quick authentication of Cordyceps. View Full-Text
Keywords: Cordyceps; Cordyceps sinensis; Cordycipitaceae; ITS; RAPD-SCAR; herbal authentication; molecular markers Cordyceps; Cordyceps sinensis; Cordycipitaceae; ITS; RAPD-SCAR; herbal authentication; molecular markers
►▼ Show Figures 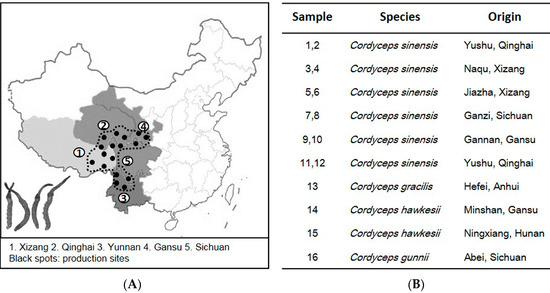