Study of the Relationships between the Structure, Lipophilicity and Biological Activity of Some Thiazolyl-carbonyl-thiosemicarbazides and Thiazolyl-azoles
Previous Article in Special Issue

Targeted and Untargeted Metabolomics to Explore the Bioavailability of the Secoiridoids from a Seed/Fruit Extract (Fraxinus angustifolia Vahl) in Human Healthy Volunteers: A Preliminary Study

The bark, seeds, fruits and leaves of the genus Fraxinus (Oleaceae) which contain a wide range of phytochemicals, mostly secoiridoid glucosides, have been widely used in folk medicine against a number of ailments, yet little is known about the metabolism and uptake of the major Fraxinus components. The aim of this work was to advance in the knowledge on the bioavailability of the secoiridoids present in a Fraxinus angustifolia Vahl seed/fruit extract using both targeted and untargeted metabolomic analyses. Plasma and urine samples from nine healthy volunteers were taken at specific time intervals following the intake of the extract and analyzed by UPLC-ESI-QTOF. Predicted metabolites such as tyrosol and ligstroside-aglycone glucuronides and sulfates were detected at low intensity. These compounds reached peak plasma levels 2 h after the intake and exhibited high variability among the participants. The ligstroside-aglycone conjugates may be considered as potential biomarkers of the Fraxinus secoiridoids intake. Using the untargeted approach we additionally detected phenolic conjugates identified as ferulic acid and caffeic acid sulfates, as well as hydroxybenzyl and hydroxyphenylacetaldehyde sulfate derivatives which support further metabolism of the secoiridoids by phase I and (or) microbial enzymes. Overall, the results of this study suggest low uptake of intact secoiridoids from a Fraxinus angustifolia Vahl extract in healthy human volunteers and metabolic conversion by esterases, glycosidases, and phase II sulfo- and glucuronosyl transferases to form smaller conjugated derivatives. View Full-Text
Keywords: tyrosol; ligstroside-aglycone; UPLC-ESI-QTOF; absorption; metabolism; phase II conjugation tyrosol; ligstroside-aglycone; UPLC-ESI-QTOF; absorption; metabolism; phase II conjugation
►▼ Show Figures 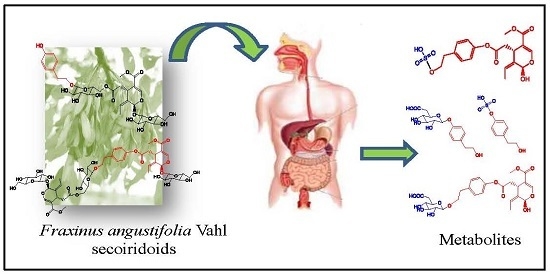