Energy and Molecules from Photochemical/Photocatalytic Reactions. An Overview

The temperate and herbaceous genus Vicia L. is a member of the legume tribe Fabeae of the subfamily Papilionoideae. The genus Vicia comprises 166 annual or perennial species distributed mainly in Europe, Asia, and North America, but also extending to the temperate regions of South America and tropical Africa. The use of simple sequence repeat (SSR) markers for Vicia species has not been investigated as extensively as for other crop species. In this study, we assessed the potential for cross-species amplification of cDNA microsatellite markers developed from common vetch (Vicia sativa subsp. sativa). For cross-species amplification of the SSRs, amplification was carried out with genomic DNA isolated from two to eight accessions of 22 different Vicia species. For individual species or subspecies, the transferability rates ranged from 33% for V. ervilia to 82% for V. sativa subsp. nigra with an average rate of 52.0%. Because the rate of successful SSR marker amplification generally correlates with genetic distance, these SSR markers are potentially useful for analyzing genetic relationships between or within Vicia species. View Full-Text
Keywords: cDNA-SSR; genetic diversity; transferability; Vicia L. cDNA-SSR; genetic diversity; transferability; Vicia L.
►▼ Show Figures 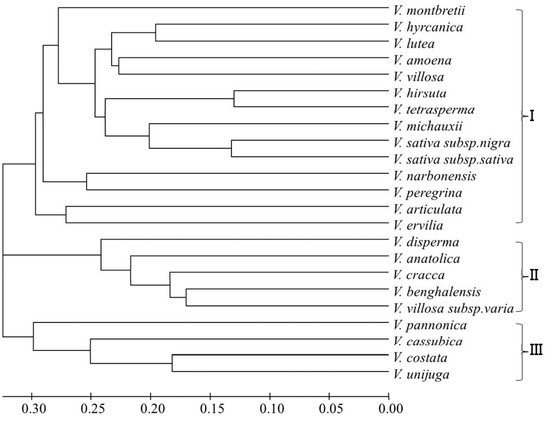