Synthesis and Antibacterial Activity of Analogs of 5-Arylidene-3-(4-methylcoumarin-7-yloxyacetylamino)-2-thioxo-1,3-thiazoli-din-4-one
Previous Article in Journal

Elicitation: A Tool for Enriching the Bioactive Composition of Foods

The mean annual global surface temperature is expected to increase between 1.1 °C to 6.4 °C by the end of the 21st century [1]. The negative impacts of climate trends on the yields of crops and forages have already occurred on a global scale [2]. Heat stress is one of the primary abiotic stressors that may lead to dramatic reductions in the economic yield of crop plants [3,4] and limit the growth of cool-season plant species in many regions of the world.
An increased capacity for thermotolerance and delayed thermal injury contribute to the heat tolerance of plants [5]. Studies have shown that protection from heat-stress injury can be induced in heat-sensitive, cool-season plants by subjecting these plants to a heat-acclimation pretreatment; this was found to be partially due to the induction of antioxidative compounds, which helped to prevent the accumulation of reactive oxidant species (ROS) and membrane lipid peroxidation during heat stress [6]. Heat stress alters the physiological, biochemical, and molecular responses of plants. Photosynthetic activity is an important temperature-dependent functional trait that is linked to plant metabolism and performance [7]. Studies have also shown that the photosynthetic responses to heat stress demonstrated synergistic trends implicating internal CO2 concentration, net photosynthesis ,and stomatal conductance; the modifications of net photosynthesis were also associated with changes in stomatal control [8,9,10].
Furthermore, plants can acclimate to high temperature-induced oxidative stress by increasing the expression of genes involved in antioxidant systems. Plants have evolved an antioxidant defense system consisting of both nonenzymatic and enzymatic constituents in plant cells, which minimizes or even eliminates oxidative damage [11,12]. The study of gene expression underlying the changes in antioxidant enzyme activities could provide insight into the molecular adaptation of plants to heat-stress conditions [13]. Examining the effects of heat-stress on the expression of genes coding for the key enzymes superoxide dismutase (SOD), Peroxidase (POD), and catalase (CAT) could provide such insight.
Orchardgrass (Dactylis glomerata L.) is a cool-season, perennial forage grass, considered the fourth most important forage grass in the temperate areas of the world [14]. The effects of heat acclimation on subsequent heat tolerance mechanisms are not well understood in orchardgrass. For example, antioxidant metabolisms may respond differently to heat-stress in different orchardgrass varieties, and how antioxidant enzyme activities and the expression of gene encoding antioxidant enzymes are affected by heat-stress conditions are not well understood. Moreover, it could be important to know whether antioxidant enzyme activities are associated with better photosynthetic ability and whether heat acclimation plays a significant role in heat resistance in orchardgrass. Here, we investigated changes in photosynthetic activity, antioxidant enzyme activities, and the expression patterns of genes encoding antioxidant enzymes in leaves of orchardgrass under heat stress, and compared these responses in NA and HA samples. We aimed to see whether antioxidant system plays an important role in enhanced heat tolerance, performance of orchardgrass after heat acclimation, and to investigate the relationship between antioxidant enzyme activities and their correspondent gene expressions. We expected to solve the problem that whether the impacts on antioxidant enzyme activities of heat acclimation are controlled by their correspondent gene regulation. Insights from this study will help us further understand the interactive mechanisms of plant thermal tolerance and heat acclimation, as well as inform the selection of heat-tolerant varieties, thus improving cultivation in a changing climate. 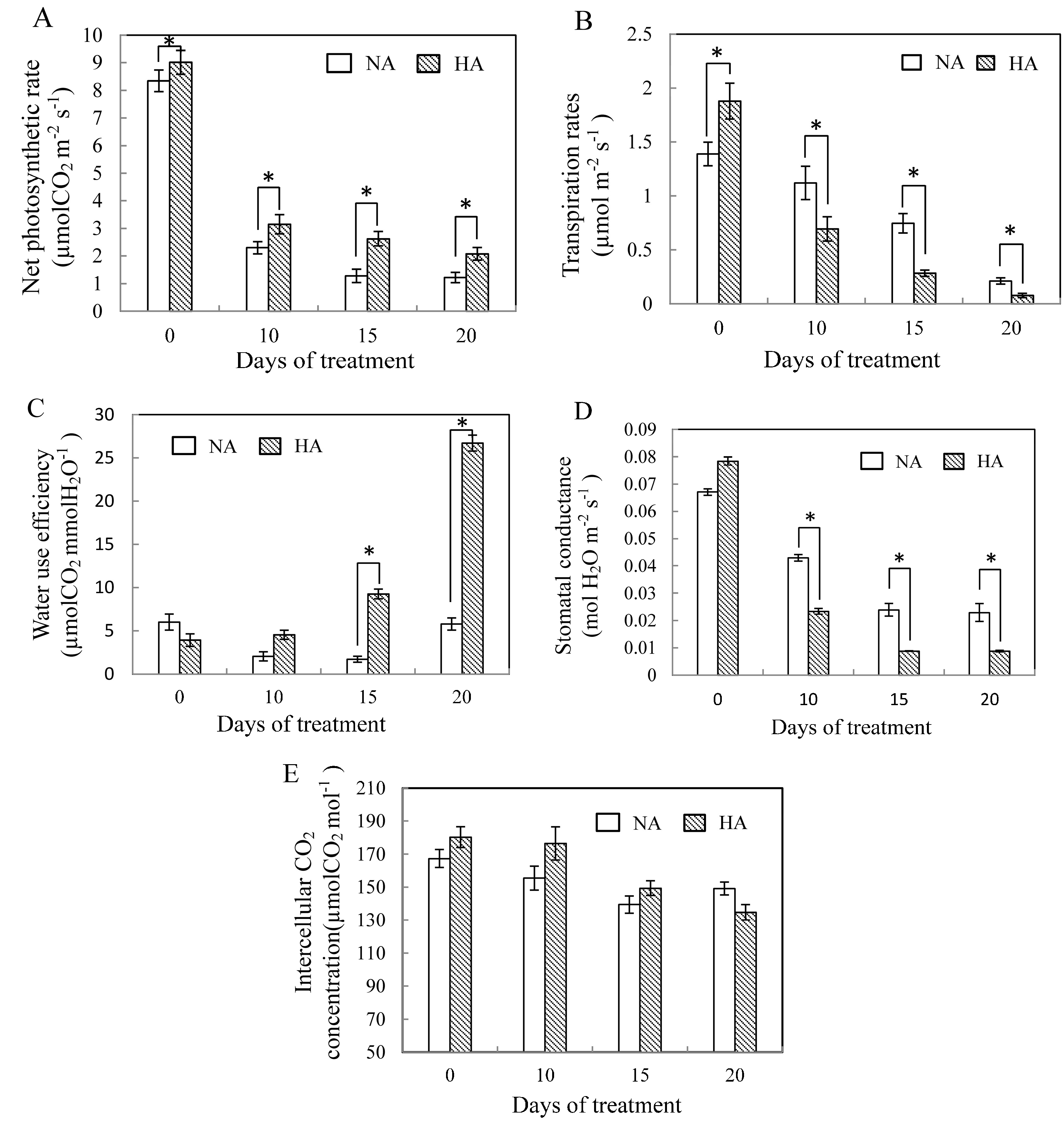 Intercellular CO2 concentration progressively declined in NA plants (10.9%) and HA plants (25.3%) during the entire treatment, and there is no difference between NA and HA plants during the experiment (p ≤ 0.05). Cellular membrane stability was estimated by examining EL and MDA content in the leaves. As the number of days of heat stress increased, MDA content increased regardless of whether or not the plant had undergone heat acclimation. MDA content increased by 90% from the baseline score (day 0) and 1.7-fold in NA and HA plants (Figure 2A). The differences in MDA content among the two treatments were significantly different at 0 day and 20 day under heat stress (Figure 2A).

Heat stress caused a significantly increasing amount of EL as the days increased at 38/30 °C (day/night); this increase was also seen in both HA and NA plants. However, HA plants had lower EL levels than NA plants at 0 d and 20 d under heat stress (Figure 2B). 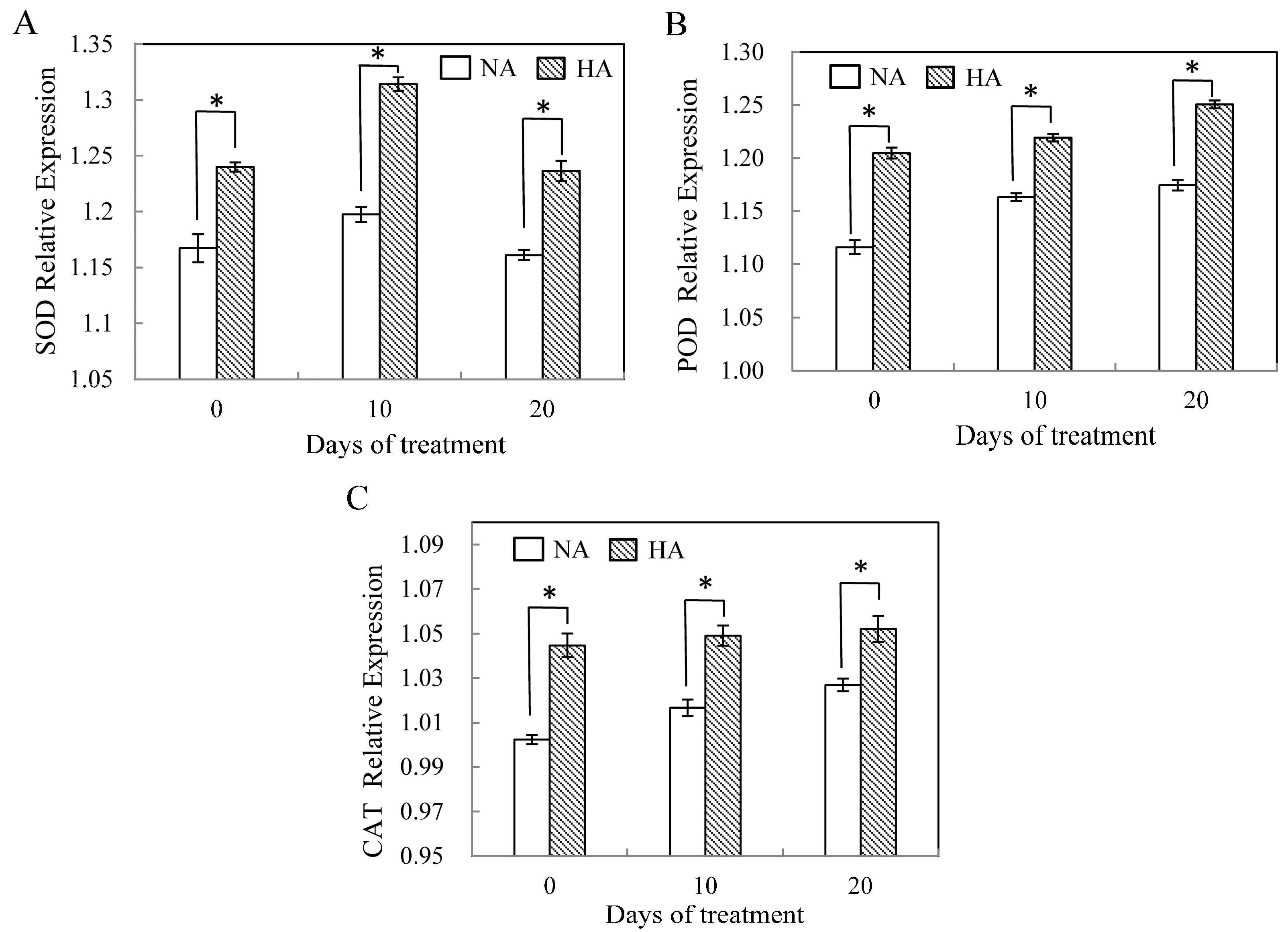 Specimens of the orchardgrass (Dactylis glomerata L.), cultivar ‘01998’, were collected from a field in the research farm of Sichuan Agricultural University in Ya’an, China. Plants (2-year-old) were grown in pots (24 cm diameter by 30 cm deep) filled with a mixture of sterilized sand and loamy soil (1:2, v:v). Plants were grown in a greenhouse for a month and then transferred to a controlled growth chamber with a temperature of 25 °C/20 °C (day/night), 14 h photoperiod, 65% relative humidity, and a photosynthetically active radiation of 1,000 µmol m−2s−1. Grasses were well watered for two weeks to acclimate them to the environment before heat treatments began. Experiments consisted of 16 pots total (eight per set). One set was used as a NA control, while the other was HA and exposed to two heat stress cycles. Based on a preliminary experiment under heat stress (38 °C/30 °C, day/night), there is a subtle change around the fifth day. Therefore, according to [32,33] and our preliminary experiments, we put it into effect with some modifications. Plants were first transferred from the control regimen (25 °C/20 °C, day/night) to the high-temperature regimen (38 °C/30 °C, day/night) until leaf wilting occurred (5 days stress). Plants were then permitted to recover at control conditions for 3 days and then subjected to the second cycle of heat stress described above. After heat preconditioning, HA and NA plants were exposed to heat stress (38 °C/30 °C, day/night) for 20 days in growth chambers. Plants were well watered under both control and heat stress conditions to prevent drought stress.

The net photosynthetic rate (Pn), transpiration rate (Tr), intercellular CO2 concentration (Ci) and stomatal conductance (Gs) were measuring using a portable photosynthetic system (LI-6400, Li-Cor, Lincoln, NE, USA). The photosynthetic active radiation (PAR) was 1,200 µmol·m−2s−1 and the CO2 concentration was 400 µmol mol−1. Stomatal conductance (Gs) and Ci were determined at a saturated light intensity of 1,000 µmol m−2s−1, and 70% relative humidity. Thirty leaves were selected randomly in each pot for each measurement. Cellular membrane stability, expressed as electrolyte leakage (EL), was determined following the methods of Blum and Ebercon [34]. All of the above measurements were made at 10:00 in the morning after 0 day, 5 day, 10 day, 15 day and 20 day of heat stress for both HA and NA plants, respectively.

For the extraction of antioxidant enzymes, 0.2 g of fresh leaves were randomly sampled from each pot on each sampling date, frozen immediately in liquid nitrogen for 2 min, and chopped and ground in 2 mL solution containing 50 mM phosphate buffer (pH = 7.8) and 1% (w/v) polyvinyl polypyrrolidone. The homogenate was centrifuged at 13,000 rpm for 25 min at 4 °C and the supernatant was collected for use in the antioxidant enzyme activity and malondialdehyde (MDA) production. The membrane lipid peroxidation of the leaves was then measured by examining the amount of MDA in the leaves [35].
The SOD activity was measured by monitoring the rate of p-nitro blue tetrazolium chloride reduction in absorbance at 560 nm [36]. The reaction mixture (1.5 mL) contained 50 mM phosphate buffer (pH = 7.8), 13 mM methionine, 75 µM nitroblue tetrazolium (NBT), 2 µM riboflavin, 0.1 mM EDTA, and 50 µL enzyme extract. POD activity was assayed in a reaction solution containing 1.85 mL 0.1 M HAc-NaAc buffer (pH = 5.0), 1 mL 50% (v/v) guaiacol solution, and 50 µL enzyme extraction by monitoring the increase in absorbance due to guaiacol oxidation at 460 nm [37]. CAT activity was determined following [38], with some modifications. Briefly, we used the disappearance of H2O2 at 240 nm at 25 °C. The reaction solution contained 50 mM phosphate buffer solution (PBS, pH = 7.0), 15 mM H2O2, and 50 µL enzyme extract.

For analysis of the transcriptional levels of cytosolic Cu/ZnSOD, POD and CAT genes, all plant materials were immediately frozen in liquid nitrogen and stored at −70 °C until further experiments. Total RNA was extracted from leaf samples using RNeasy Plant Kit II (Genebase Bioscience, Guangzhou, China) bases on the manufacturer’s instructions. RNA was reverse transcribed using the iScript cDNA Synthesis Kit (Bio-Rad Laboratories Inc., Hercules, CA, USA). The cDNA obtained for each sample was diluted 1:20 with nuclease-free water for qRT-PCR. Orchardgrass expressed sequence tags (ESTs) coding for antioxidant enzyme genes were identified from orchardgrass EST databases. Cytosolic Cu/ZnSOD, POD, CAT and β-actin were identified based on sequence similarity after tblastx analysis with orthologous genes from wheat. Orchardgrass specific β-actin primers served as internal control to normalize cDNA quantity for each treatment sample. Specific primers (Table 1) were used to amplify with the synthesized cDNA for 39 cycles according to the following conditions for each cycle: 95 °C for 10 s, 61.5 °C for 15 s, 72 °C for 15 s, then a final storage at 4 °C. The qRT-PCR analyses were performed on the CFX Connect Real-time PCR detection system (Bio-Rad) using 3 µL of diluted cDNA in a 10 µl reaction volume with 2× IQ SYBR Green Supermix (Bio-Rad). Melting curves were also plotted (60–90 °C) in order to make sure that a single PCR product was amplified for each pair of primers (S.1). The qPCR data were obtained as CT values, and analyzed using the comparative Ct method (2−ΔΔCt) [39].

In this experiment, samples were randomized, four replicates for two heat treatments, and five sampling dates. Plants were arranged randomly in the growth chambers. To compare the response of HA and NA plants under different treatments, statistical analysis was conducted using an analysis of variance (ANOVA) based on the general linear model. Differences between means were considered significant at least 95% confidence level (p ≤ 0.05).

This research work was funded by The National Basic Research Program (973 program) in China (No 2014CB138705), the earmarked fund for Modern Agro-industry Technology Research System (No. CARS-35-05) and the National Natural Science Foundation of China (NO NSFC 31372363).