The genus Miscanthus has great potential as a biofuel feedstock because of its high biomass, good burning quality, environmental tolerance, and good adaptability to marginal land. In this study, the genetic diversity and the relationship of 24 different natural Miscanthus sinensis populations collected from Southwestern China were analyzed by using 33 pairs of Sequence Related Amplified Polymorphism (SRAP) primers. A total of 688 bands were detected with 646 polymorphic bands, an average of 19.58 polymorphic bands per primer pair. The average percentage of polymorphic loci (P), gene diversity (H), and Shannon’s diversity index (I) among the 24 populations are 70.59%, 0.2589, and 0.3836, respectively. The mean value of total gene diversity (HT) was 0.3373 ± 0.0221, while the allelic diversity within populations (HS) was 0.2589 ± 0.0136 and the allelic diversity among populations (DST) was 0.0784. The mean genetic differentiation coefficient (Gst = 0.2326) estimated from the detected 688 loci indicated that there was 76.74% genetic differentiation within the populations, which is consistent with the results from Analysis of Molecular Variance (AMOVA) analysis. Based upon population structure and phylogenetic analysis, five groups were formed and a special population with mixed ancestry was inferred indicating that human-mediated dispersal may have had a significant effect on population structure of M. sinensis. Evaluating the genetic structure and genetic diversity at morphological and molecular levels of the wild M. sinensis in Southwest China is critical to further utilize the wild M. sinensis germplasm in the breeding program. The results in this study will facilitate the biofuel feedstock breeding program and germplasm conservation. View Full-Text
Keywords: genetic diversity; population structure; SRAP; Miscanthus sinensis genetic diversity; population structure; SRAP; Miscanthus sinensis
►▼ Show Figures 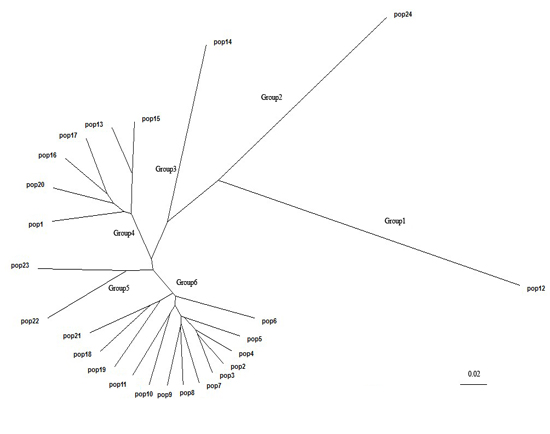