Inhibitory Activity of the Flower Buds of Lonicera japonica Thunb. against Histamine Production and L-Histidine Decarboxylase in Human Keratinocytes

Various detergents are used in our daily life is a wide variety of toiletry and household cleaning products. In other words, our skin is frequently exposed to those chemical detergents. In some cases, some of these detergents in shampoos and soaps could cause adverse effects on the skin like irritation, dryness and itching [1,2]. At present, anionic surfactants are used in many these detergents in order to achieve stronger detergency, among of them, sodium laurate (SL) and/or sodium dodecylsulfate (SDS) are reported to cause irritation reactions in human and animal skin [3,4,5].
In our recent studies, we found [6,7] that topical application of 1%‒10% SL or 10% SDS induces itch-related behaviors (scratching) in mice, and they are is suppressed by terfenadine, a H1 histamine antagonist. Furthermore, such itch-related behaviors are observed in mast-cell deficient mice treated with SL, and epidermal histamine production is enhanced at the same time, suggesting that SL exerts an action on epidermal histamine release rather than on mast cells. Histamine is known to be derived from the decarboxylation of the amino acid histidine through a reaction catalyzed by the enzyme by l-histidine decarboxylase (HDC). Recently, Ichikawa et al. [8] reported that HDC is initially translated in mammalian as a 74-kDa form and then post-translationally processed into a 53-55-kDa form which has stronger activity than the 74-kDa form. In further studies, the effect of SL on HDC processing was examined [6,7], and it was found that SL enhanced the processing of 74-kDa to 53-kDa HDC in the epidermis, which indicates that epidermal histamine plays a crucial role in the development of these scratching behaviors. In addition, both 74-kDa and 53-kDa HDCs are also detected in a three-dimensional human keratinocyte culture in which SL increases the ratio to 53-kDa HDC to 74-kDa HDC and the production of histamine [6]. Thus, this culture assay with three-dimensional human keratinocytes could be a very effective screening tool to find novel materials against skin itching and/or as model of skin irritation test to replace animal testing because animal tests in cosmetics have been currently prohibited in the European market [9].
In this study, the inhibition of a water extract of crude drug “Kin-gin-ka” (flower buds of Lonicera japonica Thunb., FLJ) and its main chemical constituent chlorogenic acid against SL-enhanced histamine production and HDC in human keratinocytes were examined in detail on the basis of the results of a pre-screening assay in the course of a search for anti-itching materials from natural medicines. “Kin-gin-ka” is one of the most widely used traditional Chinese medicines for treatment of exo-pathogenetic wind-heat, and some infectious diseases [10], and it possesses various pharmacological actions such as against microorganisms, oxidation and inflammation [11,12,13].

As shown in Figure 1, the HPLC profile indicated that chlorogenic acid (Rt: 6.38 min) was the major chemical constituent of FLJ and its contents was 63 mg/g of extract powder in the light of absolute quantitative chemical analysis.

2.2. Effects of the FLJ Extract and Chlorogenic Acid on SL-Enhanced Histamine Production

After treatment with 100–1,000 µg/mL of FLJ extract (corresponding to a chlorogenic acid concentration of 6.3–63 µg/mL), the SL-enhanced histamine production was suppressed in the three-dimensional human keratinocyte culture in a non-concentration dependent manner although at the concentration of 1,000 µg/mL it was significant (Figure 2). Chlorogenic acid (60 µg/mL), however, showed a weaker inhibition than that of FLJ that it was determined on the basis of its contents in FLJ at a concentration of 1,000 µg/mL. In addition, no effect on cell viability was observed with ratios to vehicle of 107.5%, 102.2%, 101.8% and 102.3% in each group, respectively (data not shown). This result suggested that other chemical constituents could contribute to the inhibitory activity against SL-induced histamine inhibition of FLJ besides chlorogenic acid. Hence, further chemical study is necessary to clarify this.
It should be noted that chlorogenic acid significantly inhibited SL-induced histamine production in murine epidermis [14], however, in the present study, such a significant inhibition was not indicated. Although the reason is unclear, it may be speculated that chlorogenic acid has an effect on the histamine production in other cells such as mast cells in addition to keratinocytes in the epidermis.

2.3. Effects of the FLJ Extract and Chlorogenic Acid on the Expression of HDC Induced by SL Treatment

As shown in Figure 3, the effects of both FLJ extract (1,000 µg/mL) and chlorogenic acid (60 µg/mL) on HDC expression were further examined in the three-dimensional human keratinocyte culture after treatment with 1% SL, and they did not suppress 74-kDa HDC expression levels compared to the vehicle. 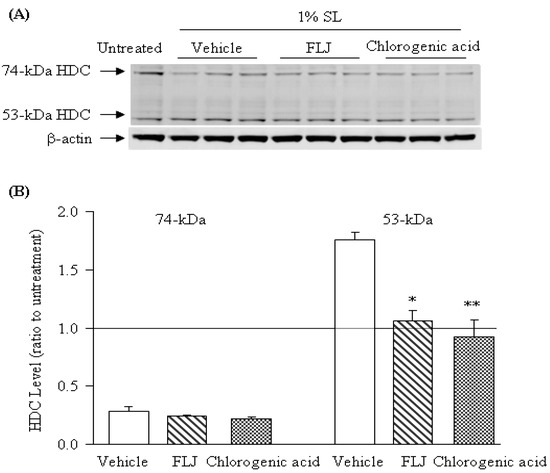 Dried crude FLJ drug (No. H121012220, collected in Henan Province, China) was provided and identified by Kracie Pharma., Ltd. (Takaoka, Japan). Approximately 240 g of FLJ was pulverized and extracted with distilled water (1,920 mL) under reflux for 30 min, and then the extract was lyophilized to obtain extract with a yield of 18.6%. The voucher specimens are deposited at the herbarium of Kracie Pharma., Ltd. For HPLC analysis (injection 10 µL) of the FLJ extract was performed with a model 2690 HPLC system equipped with a model 996 photodiode array detector (Nihon Waters Co., Ltd., Osaka, Japan) at 340 nm and a Capcell Pak C18 UG120 column (4.6 mm i.d. × 250 mm, particle size 5 μm, Shiseido Co. Ltd., Tokyo, Japan). The column was eluted with acetonitrile in 0.1% phosphoric acid using 10%–100% linear-gradient for 30 min at 40 °C with flow rate at 1.0 mL/min. Chlorogenic acid (purity > 95%, Cayman Chemical Co., Ann Arbor, MI, USA) was dissolved in 50% ethanol before use as was the FLJ extract.

The Labcyte Epi-Model system (Japan Tissue Engineering Co., Ltd., Gamagori, Japan) is a three-dimensional keratinocyte culture, of which prepared from normal human keratinocytes obtained from neonate foreskin with free of other epidermal cells such as melanocytes. SL (Nacalai Tesque, Inc., Kyoto, Japan), chlorogenic acid, and the powder of FLJ extract were dissolved in distilled water. SL solution (1% w/v, 100 µL) was applied to the keratinous layer of the culture for 1 min and then immediately removed. The external surface of the culture was washed three times with distilled water and then left to stand in 5% CO2 and air at 37 °C for 2 h, and thereafter treated with 200 μL of chlorogenic acid or FLJ extract for 30 min.

In the previous studies, we found anionic surfactants such as sodium laurate (SL) and/or sodium dodecly sulfate (SDS) exert actions on epidermal keratinocytes rather than mast cells to give rise to histamine production and skin itching by increasing the expression of the 53-kDa active form of l-histidine decarboxylase (HDC). In addition, with treatment of SL in a three-dimensional human keratinocyte culture, both increases in the 53-kDa HDC and histamine production are detected and thus this culture assay is applied to screen anti-itching materials from natural resources. [6,7]. In this study, the inhibitory activity of “Kin-gin-ka” (flower buds of Lonicera japonica Thunb., FLJ) against histamine production and l-histidine decarboxylase were examined in this culture assay.
The result showed both FLJ and its main chemical constituent chlorogenic acid had inhibitory activities against the expression of 53-kDa HDC and histamine production. However, chlorogenic acid showed a weaker effect on histamine production than that of FLJ, and suggesting other chemical constituents besides chlorogenic acid could contribute to the inhibitory activities. Thus, a further chemical study of FLJ is in progress.

© 2014 by the authors. licensee MDPI, Basel, Switzerland. This article is an open access article distributed under the terms and conditions of the Creative Commons Attribution license ( http://creativecommons.org/licenses/by/3.0/).