Gallbladder cancer (GBC) is the most commonly diagnosed malignancy of the biliary tract and the fifth most frequently occurring gastrointestinal cancer [1,2,3,4,5,6]. Because of the nonspecific signs and symptoms, early diagnosis of gallbladder carcinoma is very difficult. Therefore, many patients are diagnosed with advanced GBC, a stage at which treatment by resection is not possible [7,8,9]. As a result, the prognosis of advanced GBC is extremely poor [10,11,12,13], and the 5-year survival rate is less than 10%, as shown by different reports [5,14,15]. Moreover, most patients will experience recurrence of the cancer after surgery and will often not receive effective treatment through chemotherapy or radiotherapy [16,17]. Hence, new effective treatments and drugs are urgently needed in order to improve the outcome of patients with advanced GBC.
Triptolide is a small molecule (MW 360.6, Figure 1) isolated from the Chinese Traditional Medicinal herb Tripterygium wilfordii Hook F (TWHF). For centuries, TWHF has been used as an effective agent to treat autoimmune diseases such as rheumatoid arthritis, nephritis, and systemic lupus erythematosus [18,19,20,21]. Besides the immunosuppression activity, triptolide has been shown to possess antitumor activity, which has been observed in a wide range of human cancers, including melanoma, breast cancer, lung cancer, bladder cancer, and gastric and colorectal carcinomas [22,23,24,25]. Moreover, triptolide is currently under clinical trials [26]. However, to the best of our knowledge, the effect of triptolide on gallbladder cancer cells and the underlying mechanisms have not been previously investigated. In this study, we report the antineoplastic activity of triptolide in gallbladder cancer cell lines (including GBC-SD and SGC-996 cell lines) and the potential molecular mechanisms underlying this activity. Our results suggest that triptolide may be a promising agent to treat gallbladder carcinoma. 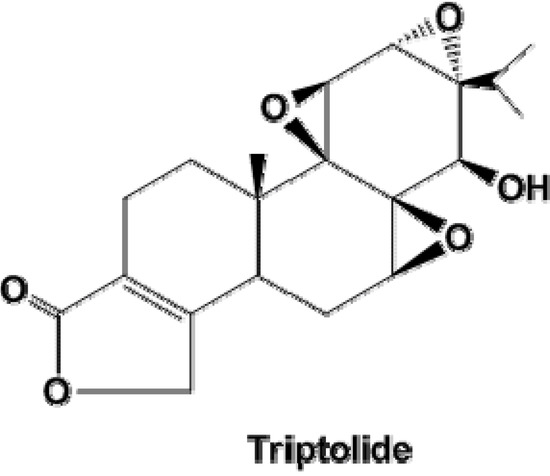 2.1. Triptolide Decreases Proliferation and Viability of Gallbladder Cancer Cells in a Dose-dependent Manner

To investigate the effects of triptolide on growth and survival of gallbladder cancer cells, we treated GBC-SD and SGC-996 cells with increasing concentrations of triptolide (0–400 nmol/L for GBC-SD, 0–100 nmol/L for SGC-996) for 48 and 72 h. As shown in Figure 2A, B, triptolide induced a time- and dose-dependent decrease in cell viability of GBC-SD and SGC-996 cells. The IC50 (the concentration of drug inhibiting 50% of cell growth) of triptolide for GBC-SD and SGC-996 cells at 48 h was approximately 100 nmol/L and 25 nmol/L, respectively. In addition, we investigated the anti-proliferation effect of triptolide on gallbladder cancer cells using the plate-well colony formation assay. As shown in Figure 2C, D, the numbers of colonies of GBC-SD and SGC-996 cells were significantly reduced in a concentration-dependent manner after exposure to triptolide. Moreover, statistical analysis demonstrated that the mean sizes of the triptolide-treated colonies were smaller than those of the control colonies (Figure 2E, F). These data showed that triptolide could inhibit the proliferation ability of gallbladder cancer cells.
The colony formation assay is an effective method for the determination of single cell proliferation capacity, and its basic principle is that a single cell continues proliferation for more than six generations in vitro, then becomes a clone which contains more than 50 cells. Usually cells are seeded onto 6-well plates at a density of 200 cells/mL, at this time a very small impact will produce an extremely big effect for cloning. If we choose the same concentration as in the MTT assay in this experiment, then the treated groups cannot form a clone, so we chose concentrations around 10% of the IC50 in the colony formation assay.

To examine the reason for triptolide-mediated cell growth inhibition, cell cycle distribution was analyzed after triptolide treatment using flow cytometry. The results showed that triptolide significantly inhibited cell cycle progression in GBC-SD and SGC-996 cells at 48 h (Figure 3A–D), resulting in a significant increase in the percentage of cells in the S phase( 56.04% ± 5.84, 60.28% ± 5.57% and 70.28% ± 5.28% vs. 26.68% ± 4.23% in the control group in GBC-SD cells, p < 0.05; 21.3% ± 5.24%, 38.19% ± 5.48% and 40.96 ± 4.89% vs. 8.56% ± 2.13% in the control group in SGC-996 cells, p < 0.05). In addition, the results for the sub-G1 group (blue color) indicated that triptolide induced apoptosis of gallbladder cancer cells.
Next, we determined the effects of triptolide on cell cycle-related proteins. Cyclins and cyclin-dependent kinases (CDKs) are the two key classes of cell cycle regulatory molecules [27]. Indeed, we observed a dose-dependent decrease in the protein expression of Cyclin A in both gallbladder cancer cell lines after triptolide treatment (Figure 3E, F). Furthermore, triptolide treatment resulted in the downregulation of CDK2 expression and the upregulation of the CDK inhibitors p21 and p27 in both GBC-SD and SGC-996 cells (Figure 3E, F). This finding is consistent with the S phase arrest induced by triptolide. These results indicate that triptolide induces S phase arrest by regulating S phase-related protein expression in gallbladder cancer cells. 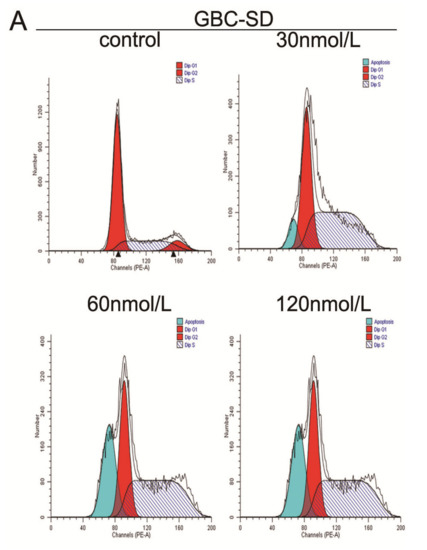 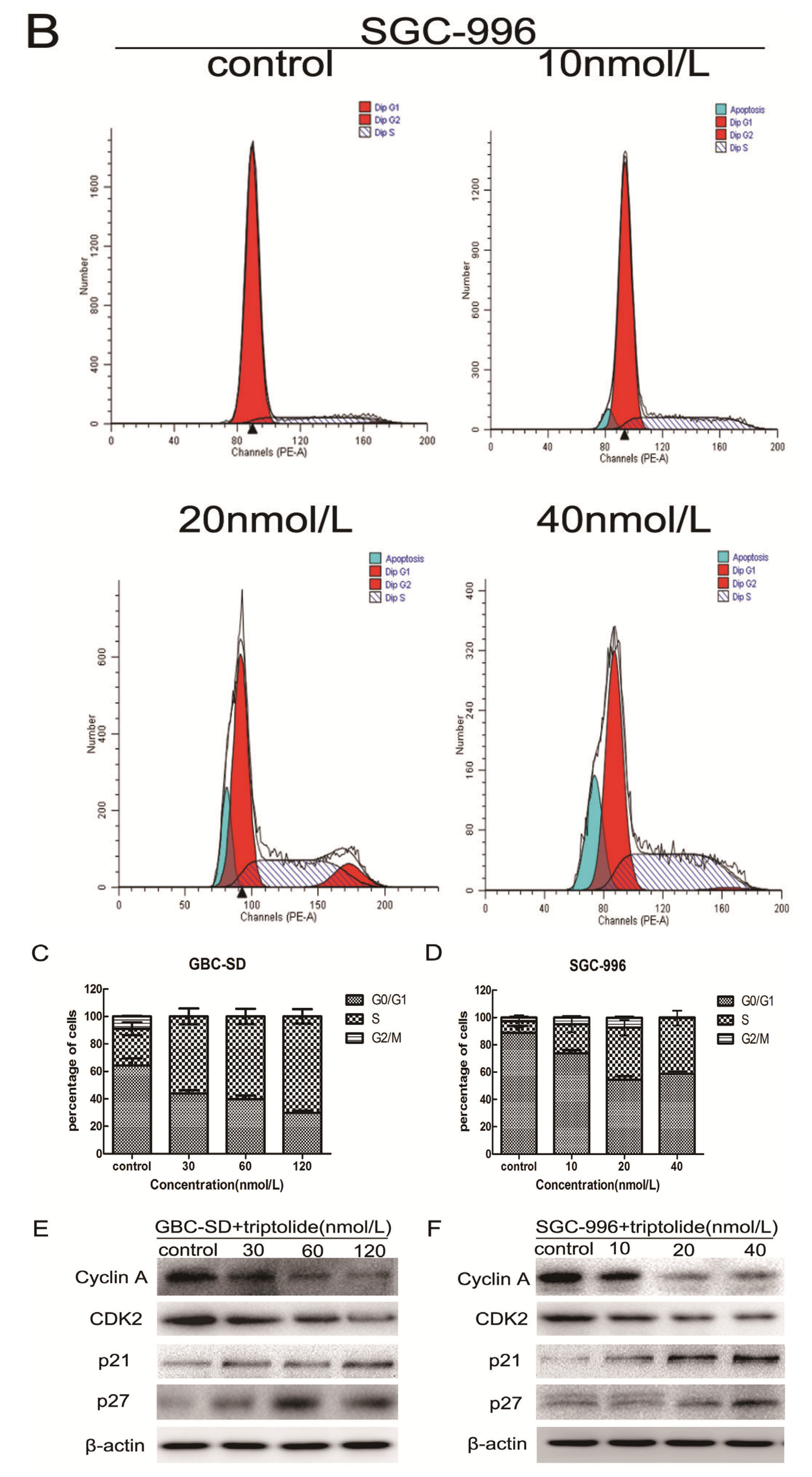 To further confirm whether triptolide induces apoptosis in GBC-SD and SGC-996 cells, the cells were exposed to different concentrations of triptolide for 48 h and then apoptosis was analyzed using annexin V-FITC/PI double staining and flow cytometry. Phosphatidyl serine (PS) is located on the cytoplasmic surface of the cell membrane in normal, live cells. However, in apoptotic cells, PS is translocated from the inner to the outer leaflet of the plasma membrane, thus exposing PS to the external environment. Annexin V-FITC binds to exposed PS on apoptotic and necrotic cells, and PI gains entry into late apoptotic cells and necrotic cells but into not early apoptotic cells and living cells. Cells in the Q3 quadrant (FITC-/PI−) were living, whereas those in the Q2 (FITC+/PI+) and Q4 (FITC+/PI−) quadrants were late and early apoptotic cells, respectively. As shown in Figure 4A, B, triptolide reduced the number of surviving cells and increased the number of both early (22.9% ± 3.67%, 33.2% ± 1.43% and 43.5% ± 2.89% vs. 2.4% ± 0.42% in the control group in GBC-SD cells, p < 0.05; 2.5% ± 0.98%, 11.6% ± 1.72% and 18.6% ± 1.41% vs. 1.4% ± 0.42% in the control group in SGC-996 cells, p < 0.05) and late apoptotic cells in a dose-dependent manner. Furthermore, we tested cell apoptosis by Hoechst 33342 staining. When GBC-SD and SGC-996 cells were exposed to various concentrations of triptolide for 48 h, the number of apoptotic cells, characterized by condensed and fragmented nuclei, increased with the dose of triptolide (Figure 4C, D).

Mitochondria play an important role in the regulation of apoptosis, and apoptosis mediated by the mitochondrial pathway is often associated with the decrease of ΔΨm. To investigate whether mitochondrial membrane integrity is damaged by treatment with triptolide, ΔΨm was examined using rhodamine 123, a yellow-green fluorescent probe for ΔΨm. As shown in Figure 5A, B, triptolide induced a dose-dependent reduction of ΔΨm, as shown by the decrease in the number of surviving cells with normal ΔΨm and the increase in the number of apoptotic cells with low ΔΨm. We found that more than 55% of GBC-SD cells and 85% of SGC-996 cells showed a reduction in ΔΨm after treatment with 120 nmol/L and 40 nmol/L triptolide for 48 h, respectively. It is noteworthy that the percentage of survival cells (for Figure 5A, B) is inconsistent to the survival ratio (for Figure 2A, B), cell cycle distribution (for Figure 3A, B) and PI/Annexin-V staining (for Figure 4A, B). This may be due to the different methods used to detect survival and apoptotic cells or may be caused by different density and status of cells. These results indicated that triptolide induced apoptosis in gallbladder cancer cells via a mitochondria-dependent mechanism. 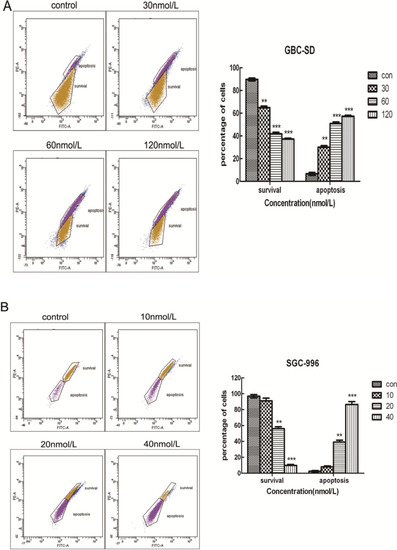 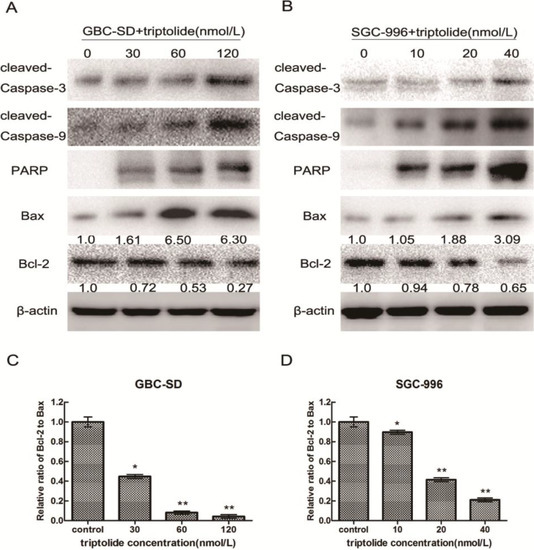 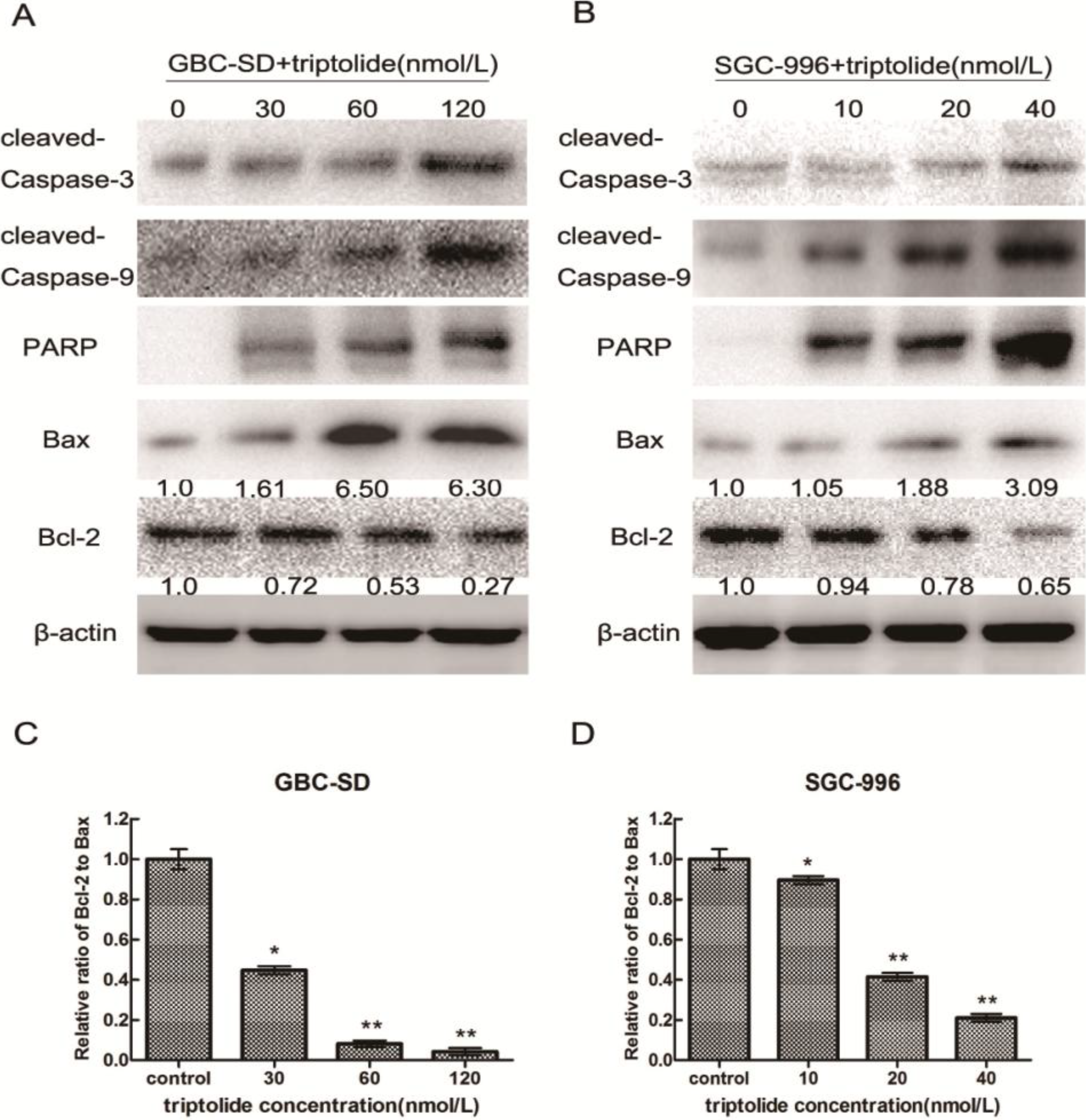 Cells in the logarithmic growth phase were aliquoted as single cell suspensions and 400 cells were placed into each well of 6-well plates (Corning, Corning, NY, USA). After adherence, cells were treated with triptolide (0.625, 1.25, and 2.5 nmol/L for GBC-SD; 0.16, 0.32, 0.64 nmol/L for SGC-996) for 48 h. Then, all plates were incubated for 2 weeks to allow colony formation. Next, cells were fixed with 4% paraformaldehyde and stained with 0.1% crystal violet (Sigma-Aldrich). After washing, the plates were air-dried, and stained colonies were photographed using a microscope (Leica, Wetzlar, Germany). The total number of colonies (>50 cells/colony) was counted, and the results were expressed as the average of three independent experiments performed over multiple days.

GBC-SD and SGC-996 cells were treated with different concentrations of triptolide for 48 h. Cells were then harvested by trypsinization, washed twice in cold PBS, and fixed in 70% ethanol at 4 °C overnight. After fixation, the cells were washed and resuspended in cold PBS and incubated in a solution of 10 mg/mL RNase and 1 mg/mL propidium iodide (Sigma-Aldrich) at 37 °C for 30 min in the dark. Finally, the DNA content was determined by flow cytometry (BD Biosciences, San Diego, CA, USA). The percentage of cells in the G0/G1, S, and G2/M phases was determined using Cell Quest acquisition software (BD Biosciences).

Apoptosis was analyzed using the annexin V/propidium iodide apoptosis kit according to the manufacturer’s recommendation (Invitrogen, Carlsbad, CA, USA). Briefly, GBC-SD and SGC-996 cells were seeded in 6-well plates (1 × 106 cells/well) and treated with various concentrations of triptolide for 48 h. The cells were collected, washed with cold PBS, and were resuspended in 100 μL binding buffer at a density of 1 × 106 cells/mL. Then, 5 μL of annexin V-FITC and 5 μL of propidium iodide (PI) working solution (100 μg/mL) were added to 100-μL aliquots of the cell suspension. After incubation for 15 min at room temperature away from light, 400 μL of the binding buffer was added to suspension. The samples were then immediately analyzed by flow cytometry. Each sample was assayed in duplicate, and the experiment was repeated three times.

Nuclear fragmentation was detected by staining apoptotic nuclei with Hoechst 33342. GBC-SD and SGC-996 cells were treated with different concentrations of triptolide for 48 h, collected and washed, and fixed with acetic acid:ethanol (1:3) for 15 min at room temperature. The fixed cells were stained with 5 μg/mL Hoechst 33342 for 10 min. Digital images were captured using a fluorescence microscope (Leica).

Rhodamine 123 (Rho123) was used to determine mitochondrial membrane potential (ΔΨm) as described previously [35]. After treatment with different concentrations of triptolide for 48 h, GBC-SD and SGC-996 cells were harvested and washed twice with cold PBS. The cells were then incubated with rhodamine 123 (Sigma-Aldrich) for 30 min at 5% CO2 and 37 °C in the dark. Subsequently, the cells were washed twice with cold PBS and analyzed by flow cytometry.

GBC-SD and SGC-996 cells were treated with triptolide for 48 h, and whole-cell lysates were prepared using lysis buffer (Beyotime, Shanghai, China) supplemented with Roche Complete Mini Protease Inhibitor Cocktail (Roche, Basel, Switzerland), which was added immediately before the lysis buffer was used. The protein concentration in the cell extracts was determined using the bicinchoninic acid assay system (Beyotime) with BSA as a standard. Equal amounts of protein from each sample were separated by SDS-PAGE and transferred to polyvinylidene difluoride membranes (Millipore, Bedford, MA, USA). Membranes were blocked with 5% skim milk and then incubated with anti-caspase-3, anti-caspase-9, anti-Bcl-2, anti-Cyclin A, anti-CDK2, anti-p21, anti-p27, anti-Bax, anti-PARP, or anti-β-actin antibodies (1:1000; Cell Signaling Technology) at 4 °C overnight. After washing with TBST buffer, the membranes were incubated with a horseradish peroxidase-conjugated goat anti-rabbit/anti-mouse secondary antibody (1:5,000; Abcam, Cambridge, UK), and the bands were visualized using an enhanced chemiluminescent detection reagent from Pierce (Rockford, IL, USA). Photographs were obtained and the bands were scanned, using the Gel Doc 2000 (BioRad, Hercules, CA, USA), to determine the optical densities and quantify the proteins.

Statistical analysis was carried out using the SPSS13.0 software. All values are expressed as the mean ± SD unless otherwise stated. Student’s t-test was performed to compare the differences between treated groups and their controls. A p-value of less than 0.05 (denoted by *) was considered statistically significant (*** p < 0.001, ** p < 0.01).