Natural Products from the Genus Tephrosia

Essential oils are natural volatile compounds that exhibit strong odors and are produced as secondary metabolites by aromatic plants [1]. They comprise complex mixtures of substances present in quite different concentrations, such as terpene and phenylpropanoid constituents. Historically, they have been used for various medicinal purposes, ranging from skin problems to cancer treatment and are known for their antimicrobial, anti-inflammatory, sedative and analgesic properties [2].
Phenylpropanoids (Figure 1) are a large group of organic compounds produced by plants for protection against infections, ultraviolet irradiation, wounding and herbivores. They are synthesized from the amino acid phenylalanine, that is converted into cinnamic acid. Reduction of the carboxylic acid group present in the cinnamic acid yields an aldehyde (e.g., cinnamaldehyde) and further reduction produces monolignols such as phenylpropenes (e.g., eugenol and safrole). Natural and synthetic phenylpropanoids are under current medicinal use for their pharmacological properties [3,4].

Inflammation is a biological response to noxious stimuli such as pathogens that cause tissue and cell damage [5]. It is considered a protective measure taken by the organism to remove harmful stimuli and to begin the healing process. It is classified as either acute or chronic, depending on whether it involves a short response or a prolonged one, respectively [6]. The acute inflammatory response is initiated by plasma and leukocytes infiltration to the site of injury or infection [7]. It can be triggered by receptors of the innate immune system, for example the toll-like receptors (TLRs) [8]. In the first steps of infection, resident macrophages and mast cells release inflammatory mediators, such as cytokines (e.g., interleukin-1β (IL-1β), IL-6, IL-12, and the chemokine IL-8), tumor necrosis factors (e.g., TNF-α and TNF-β), interferons (e.g., IFN-γ), eicosanoids (e.g., prostaglandins and leukotrienes) and vasoactive amines (e.g., histamine) [7]. These mediators exert complex regulatory roles in the inflammatory process in order to restore tissue homeostasis.
Generally, cytokine production is induced by bacterial endotoxin or lipopolysaccharide (LPS) that activate TLRs (e.g., TRL-4) on the cell surface, initiating a series of intracellular events. The induction of innate immune and inflammatory responses by pathogens and non-microbial endogenous molecules involves the participation of TRL4 that act via two major signaling pathways (i.e., MyD88- and TIR-domain-containing adapter-inducing interferon-β (TRIF)-dependent pathway). TRL4 is a transmembrane receptor and a binding site for LPS. One of the first steps in the TRL4 signaling pathway triggered by LPS binding involves oligomerization of the receptor followed by interaction with the adaptor molecules MyD88 and TRIF [9], leading to activation of nuclear transcription factor kappa-B (NF-κB), a ubiquitous rapid response factor involved in immune and inflammatory reactions that triggers the release of IL-1, IL-6 and TNF-α [9]. In particular, IL-1 and TNF may stimulate additional inflammatory pathways resulting in eicosanoid and nitric oxide (NO) production, induction of all adhesion molecules, and further cytokine production [10,11].
Chronic inflammation, on the other hand, is a dysregulated response to persistent noxious stimuli and seems to be related to tissue malfunction. This prolonged inflammatory condition is associated with a large number of chronic human disorders, including cancer, allergy, arthritis, atherosclerosis and autoimmune diseases [7].
In the past decades, the therapeutic potential of essential oils and their constituents has been the target of researchers in the pursuit of novel drugs of plant origin, particularly those exhibiting anti-inflammatory action, to be used in the prevention or treatment of diseases [12]. With the intent to provide information on this subject, this work presents a review of the anti-inflammatory effects of various phenylpropanoids that have been found to inhibit tissue inflammation in vivo and to modulate molecular pathways involved in inflammatory responses triggered by pro-inflammatory stimuli in vitro.
The present study was carried out based on the literature review of phenylpropanoids with anti-inflammatory activity from essential oils. Chemical structures and names of bioactive compounds as well as the corresponding references are provided (Table 1). The phenylpropanoids presented in this review were selected with reference to the effects shown in specific experimental models for evaluation of the anti-inflammatory activity and/or by complementary studies aimed to elucidate the mechanisms of action.

Table 1. Essential oil phenylpropanoids with anti-inflammatory activity.
The selection of essential oil constituents in the database were related to various terms, including essential oils and phenylpropanoids, as well as names of representative compounds of these chemical groups, further refining with keywords like asthma, antiasthmatic effect, allergy, antiallergic effect, inflammation, anti-inflammatory, immune response, lymphocytes, cytokines, immunoglobulins or immunoregulatory. The search was performed in the scientific literature databases and Chemical Abstracts and covers until November 2013. 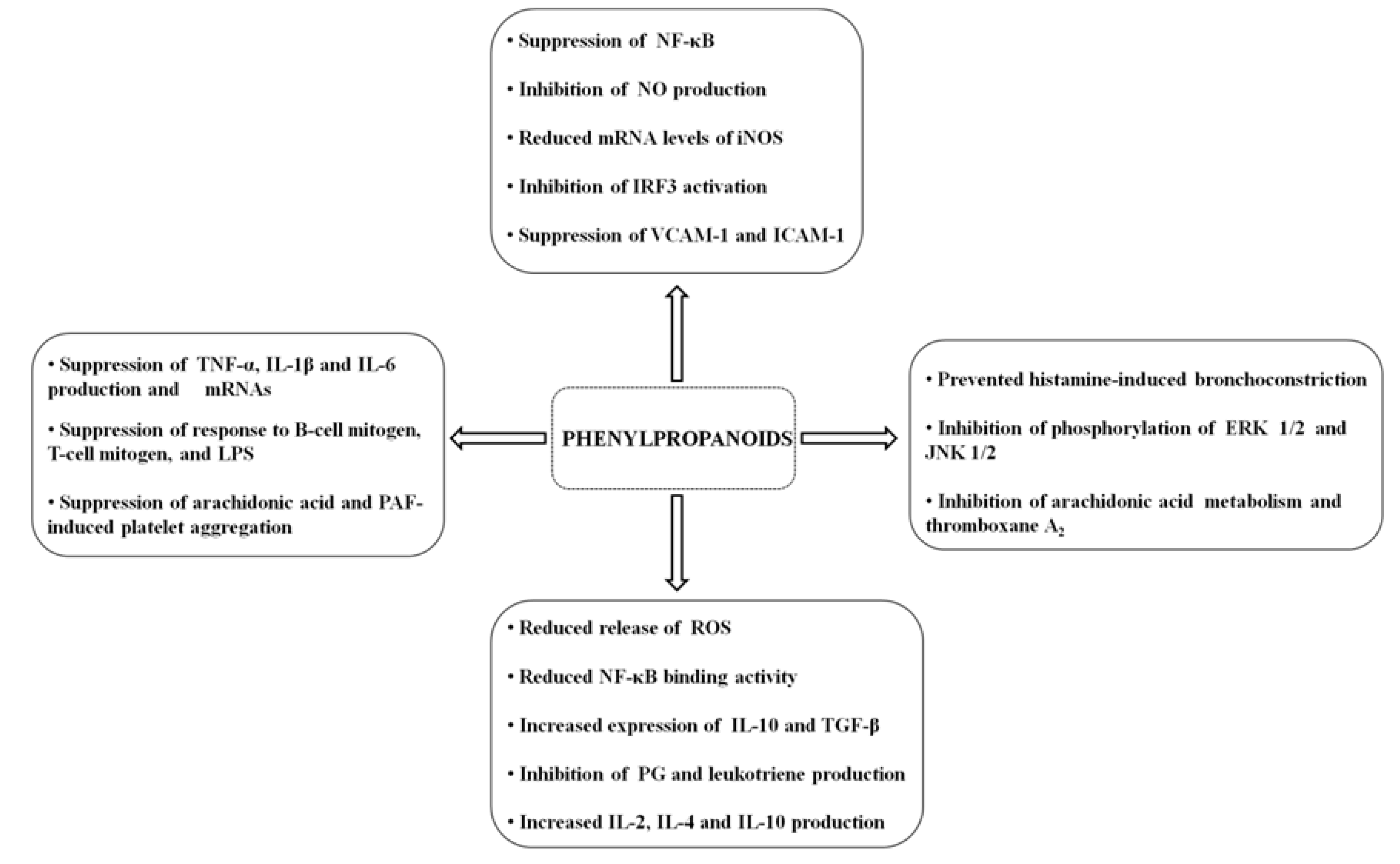 Myristicin is a phenylpropanoid found in carrot, basil, cinnamon, sparsely and nutmeg (seed of Myristica fragrans Houtt., Myristicaceae). In traditional medicine, it is used in the treatment of diarrhea, stomach aches and anxiety [81]. It is also known to display anti-cholinergic, antibacterial and hepatoprotective properties [82]. An in vitro evaluation of the anti-inflammatory action of myristicin (10, 25, and 50 μM) on double-stranded RNA-stimulated RAW 264.7 mouse macrophages showed that the production of calcium, NO, IL-6, IL-10, interferon inducible protein-10, monocyte chemotactic protein (MCP)-1, MCP-3, granulocyte-macrophage colony-stimulating factor (GM-CSF), macrophage inflammatory protein (MIP)-1α, MIP-1β, and leukemia inhibitory factor (LIF, a member of IL-6 family) was significantly suppressed by this compound. These results indicate that myristicin displays anti-inflammatory activity by inhibiting various participants of the inflammatory response and suggests the involvement of the calcium pathway in this process. Pathogenic oxidative stress with infection results in increased intracellular calcium concentration leading to stimulation of calcium-dependent kinases and pro-inflammatory activation [83]. As myristicin decreased the levels of intracellular calcium, it is believed that the production of inflammatory mediator in macrophages is being down-regulated by myristicin via calcium pathway [32].
Further consideration indicated that myristicin could be useful in the treatment of various diseases. For instance, myristicin may play a regulatory role in chronic autoimmune diseases such as Crohn’s disease, rheumatoid arthritis and encephalomyelitis by inhibition of excessive production of IL-6, LIF and IL-10 [84]. The later, although known as an anti-inflammatory cytokine, participates in the pathobiological mechanism of autoimmune diseases such as lupus and encephalomyelitis [85]. Also, myristicin may attenuate lung inflammatory diseases (e.g., bronchial pneumonia and chronic asthma caused by viral infection), since it significantly inhibited the synthesis of PIC-induced MCP-1, MCP-3, GM-CSF, MIR-1α and MIP-1β, which are implicated in the inflammatory response of many lung diseases. Moreover, it might exert anti-inflammatory action against pathogenic infections caused by bacteria and viruses, since it inhibits NO production, which is thought to be a major pro-inflammatory mediator in these infections [32].
Elemicin is a constituent of the essential oils of nutmeg and mace and it is believed to be partially responsible for the hallucinogenic effects of nutmeg [86]. Studies on anti-allergic activity of various compounds extracted from the methanolic extract of Asiasarum sieboldii (Miq.) F. Maek (Aristolochiaceae) roots showed that the elemicin inhibited 5-LOX from rat basophil leukemia cells (RBL-1 cells)—cancerous cells commonly used in the study of allergy—indicating the possible role of elemicin as an anti-allergic agent [33]. This plant is from the phylum Magnoliophyta, class Magnoliopsida and order Piperales. In the AA pathway, 5-LOX converts essential fatty acids into leukotrienes, which are directly related to the expression of pathological symptoms in asthma. Therefore, 5-LOX inhibitors are important targets for pharmaceutical interest to be developed as asthma treatments [87,88].
Asarone is a phenylpropanoid found in related herbs. The anti-inflammatory action of asarone was demonstrated in cyclooxygenase (COX) enzyme inhibitory assays. The investigation of Daucus carota seed extracts resulted in the isolation and characterization of this compound, which showed 46.15% prostaglandin H endoperoxide synthase-I (COX-I) inhibitory activity and 64.39% prostaglandin H endoperoxide synthase-II (COX-II) inhibitory activity, both at 100 mg·mL−1 [34].
Anethole is a natural constituent of essential oils of many plants such as the spice star anise (Illicium verum Hook. f., Illiciacea) and is known to have antioxidant, antifungal, antibacterial, anesthetic and anti-inflammatory properties [89]. Two inflammatory pain models—acute inflammation induced by carrageenan and persistent inflammation induced by Complete Freund’s Adjuvant—showed that the oral treatment with anethole (125, 250 and 500 mg/kg) in mice suppressed paw edema, myeloperoxidase (MLP) activity, and decreased the levels of TNF-α, IL-1β and IL-17, indicating that anethole exert anti-inflammatory activity in acute and persistent inflammatory models [35]. The anti-inflammatory action of anethole was also investigated by Domiciano and collaborators [36] by use of the croton oil-induced ear edema and carrageenan-induced pleurisy models. The oral treatment with anethole (250 and 500 mg/kg) significantly reduced the volume of migrated leukocytes, and the levels NO and PGE2 in the inflammatory exudates; however, contrary to the findings of Ritter and collaborators [35], TNF-α and IL-1β levels were not significantly altered. In the ear edema, the oral treatment with anethole, but not the topical application, reduced exudate formation and MLP activity. Moreover, another experimental study using the LPS-induced acute lung injury model in BALB/c mice showed that the intraperitoneal administration of anethole (250 mg/kg) reduced total protein concentrations, number of inflammatory cells, such as neutrophils and macrophages, and the inflammatory mediators matrix metalloproteinase-9 (MMP-9), TNF-α and NO. Anethole also reduced LPS-induced histopathological changes and inhibited NF-κB activation by blocking IκB-α degradation. These findings give further evidence of the anti-inflammatory activity of anethole, suggesting its possible therapeutical employment in the treatment of inflammation in humans [37]. The bioactive compounds discussed in this review are oxygened and low polarity molecules. Most are esters, while others are alcohol, acids, aldehyde, and methylenedioxy or methoxylated compounds. Oxygenation occurs on the aromatic ring or the terminal carbon of the carbon chain. A comparison of the pharmacological effects is not appropriate because the experimental conditions and models are different. However, data from studies show that the phenylpropanoids exhibit anti-inflammatory activity via different mechanisms of action.
Finally, Wuhu decoction, a traditional Chinese formulation employed in the treatment of asthma, has several active components, including the phenylpropanoid phenethyl alcohol, which was investigated in vitro on the contraction of isolated tracheal smooth muscle in guinea pig. Phenethyl alcohol prevented histamine-induced bronchoconstriction, which indicates anti-asthmatic effect, corroborating the traditional use of this formulation as an anti-asthmatic agent [38].

Considerable attention is being given to the discovery of novel drugs capable of fighting inflammation, particularly those of plant origin. Essential oils and their active constituents, such as the phenylpropanoids, are a promising source of anti-inflammatory substances and the data presented in this review show the potential roles the phenylpropanoids can display in this field. The information available in the scientific literature indicates the participation of phenylpropanoids in different mechanisms of action related to the immunomodulation and suppressive action in the inflammatory response as disclosed in in vitro and in vivo experimental protocols. It is expected that further studies involving clinical trials will be carried out in order to ensure a safe use of these substances as a therapeutic agent against inflammatory diseases.