Antrodia cinnamomea (AC) is a unique fungus found inhabiting the rotten wood of Cinnamomum kanehirai. A submerged liquid culture of AC has been developed and its bioproducts have been used to meet the market demand for natural fruiting bodies. AC exhibits anti-inflammatory, antitumor, antioxidant, and immunomodulatory effects. Previously, we isolated polysaccharide AC-2 from AC mycelia by means of alkali extraction with subsequent acid precipitation and found it had a pronounced anti-inflammatory effect. In this study, a novel polysaccharide named “antrodan” was obtained by further purification of AC-2 using Sepharose CL-6B column chromatography. Antrodan exhibited a molecular weight of 442 kD and contained a particularly high content of uronic acid (152.6 ± 0.8 mg/g). The protein content was 71.0%, apparently, higher than the carbohydrate content (14.1%), and thus antrodan was characterized as a glycoprotein. Its total glucan content was 15.65%, in which β-glucan (14.20%) was prominently higher than α-glucan (1.45%). Its FTIR confirmed the presence of β-linkages between sugars, and intramolecular amide bonds between sugars and amino acids. Its 1H-NMR spectrum showed that antrodan was a complex union of α- and β-glucans, which had (1→ 4)-linked α-Glcp and (1→ 3)-linked β-Glcp linkages to the carbohydrate chains via asparagine linked to protein site. Biologically, antrodan was confirmed to be totally non-detrimental to RAW 264.7 cell line even at dose as high as 400 μg/mL. It showed potent suppressing effect on the lipopolysaccharide-induced inflammatory responses in RAW 264.7 cell line. Moreover, antrodan significantly reduced the nitrogen oxide production at doses as low as 18.75 μg/mL. View Full-Text
Keywords: Antrodia cinnamomea; mycelia; glycoprotein; antrodan; structure; anti-inflammatory activity Antrodia cinnamomea; mycelia; glycoprotein; antrodan; structure; anti-inflammatory activity
►▼ Show Figures 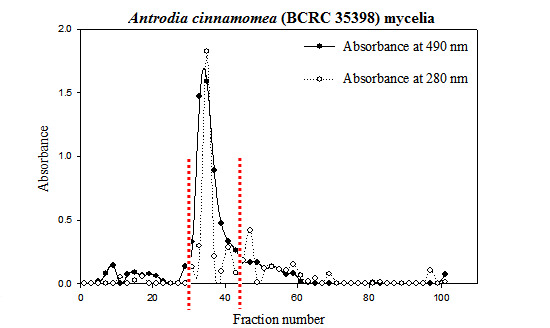