The efficacy of Prunella extracts in the prevention and treatment of lung cancer has been attributed to different components. In this study, an "active components combination model" hypothesis was proposed to explain the anti-tumor activity of Prunella. The efficacy of Prunella extracts from different regions was compared in vitro and in vivo, and the TNF-α activity in serum of tumor-bearing mice was also evaluated. High performance liquid chromatography (HPLC) was used to analyze the extracts and identify 26 common peaks. Prunella samples from different regions were classified by the cluster analysis method; both P. vulgaris L. from Bozhou and P. asiatica Nakai from Nanjing, which had the highest activities, were further divided into different classes. Six peaks from the HPLC analysis were very similar, and were identified as caffeic acid, rosmarinic acid, rutin, quercetin, oleanolic acid and ursolic acid. The total ratio of these compounds in Prunella from Bozhou and Nanjing were 1.0:14.7:3.9:1.0:4.4:1.4 and 1.0:14.8:4.0:0.8:5.6:1.8, respectively. Total triterpenes and total phenols in Prunella were separated by macroporous resin purification for activity studies. The results showed that total triterpenes and total phenols had anti-lung cancer activity and their combination significantly enhanced the activity. In addition, the combination also significantly increased the TNF-α content compared to total triterpenes or total phenols. The results indicated that the efficacy of Prunella against lung cancer was attributable to multiple components acting at an optimal ratio. View Full-Text
Keywords: efficacy material basis; Prunella; active components combination mode; prevention; lung cancer efficacy material basis; Prunella; active components combination mode; prevention; lung cancer
►▼ Show Figures 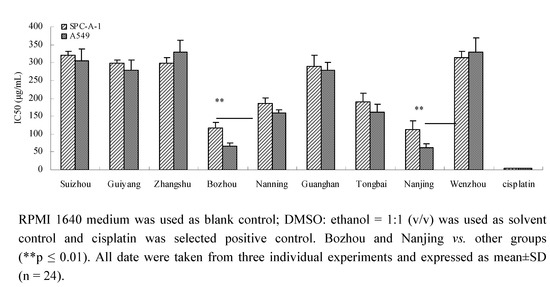