Synthesis and Tumor Cytotoxicity of Novel Amide Derivatives of β-Hederin

:
The antioxidant activity of several Malaysian plant extracts was analyzed simultaneously with their pro-oxidant capacity. This ratio represents an index (ProAntidex) of the net free radical scavenging ability of whole plant extracts. We observed that ethanolic extracts of Nephelium lappaceum peel, Fragaria x ananassa leaf, Lawsonia inermis leaf, Syzygium aqueum leaf and grape seed had a lower Pro-Antidex than the commercially available Emblica™ extract which is an antioxidant agent with very low pro-oxidant activity. Among the aqueous extracts, Lawsonia inermis leaf, Nephelium mutobile leaf and grape seed had lower pro-oxidant activity compared to the Emblica™ extract. Among these extracts, aqueous extract of Nephelium mutobile leaf had a very low index of 0.05 compared to 0.69 for Emblica™. Most of the extracts had a far lower ProAntidex compared to the Vitamin C. The index enables us to identify extracts with high net free radical scavenging activity potential. The ProAntidex is beneficial as a screening parameter to the food industries and healthcare.
Keywords:
pro-oxidant; DPPH; reducing power; antioxidants; EmblicaTM

Antioxidants are substances that protect other chemicals in the body from damaging oxidation reactions by reacting with free radicals and other reactive oxygen species within the body, hence hindering the process of oxidation [1]. Plants contain active components, namely phenolics and polyphenolics, that are known to act as antioxidants [2]. Every antioxidant is in fact a redox agent and might become a pro-oxidant to accelerate lipid peroxidation and induce DNA damage under special conditions and concentrations [3]. Studies have revealed pro-oxidant effects of antioxidant vitamins and several classes of plant-derived polyphenols such as flavonoids [4], tannins [5] and curcumin [6]. As reported earlier, resveratol [3] and phloroglucinols from Garcinia subelliptica [7] can exhibit pro-oxidant properties, leading to oxidative breakage of cellular DNA in the presence of transition metal ions such as copper. Therefore, it is essential to discover natural compounds that have high net antioxidant activity.
The pro-oxidant and antioxidant effect of plant extracts are due to the balance of two activities: free radical-scavenging activity and reducing power on iron ions, which may drive the Fenton reaction via reduction of iron ions. In a Fenton reaction, Fe2+ reacts with H2O2, resulting in the production of hydroxyl radicals, which are considered to be the most harmful radicals to biomolecules. Fe2+ is initially oxidized to Fe3+ in the Fenton reaction. By the action of many reductants, such as ascorbic acid, the oxidized forms of iron ion can be reduced later to the reduced form (Fe2+), which can enhance the generation of hydroxyl radicals. A predominant reducing power (on iron ions) over the free radical-scavenging activity in a mixture of compounds results in the pro-oxidant effect [8]. In this study, the pro-oxidant capacity of the extracts were compared to the IC50 (mg/mL) of the antioxidant scavenging activity of DPPH radical. This ratio of pro-oxidant/antioxidant activity enabled us to evaluate the net antioxidant capacity of the extracts as this index will include not only the effective free radical-scavenging ability, taking into account pro-oxidant effect of the extracts. 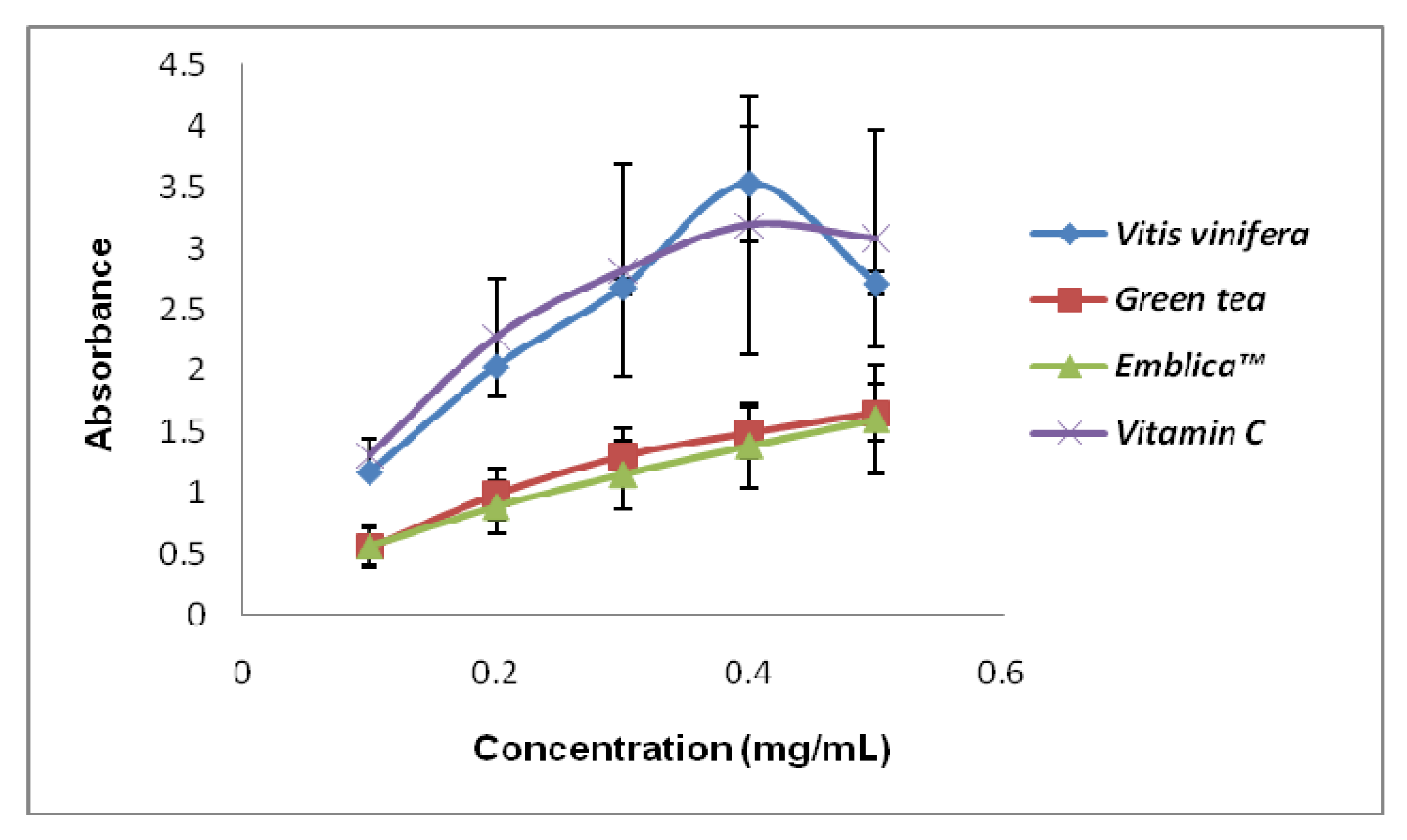 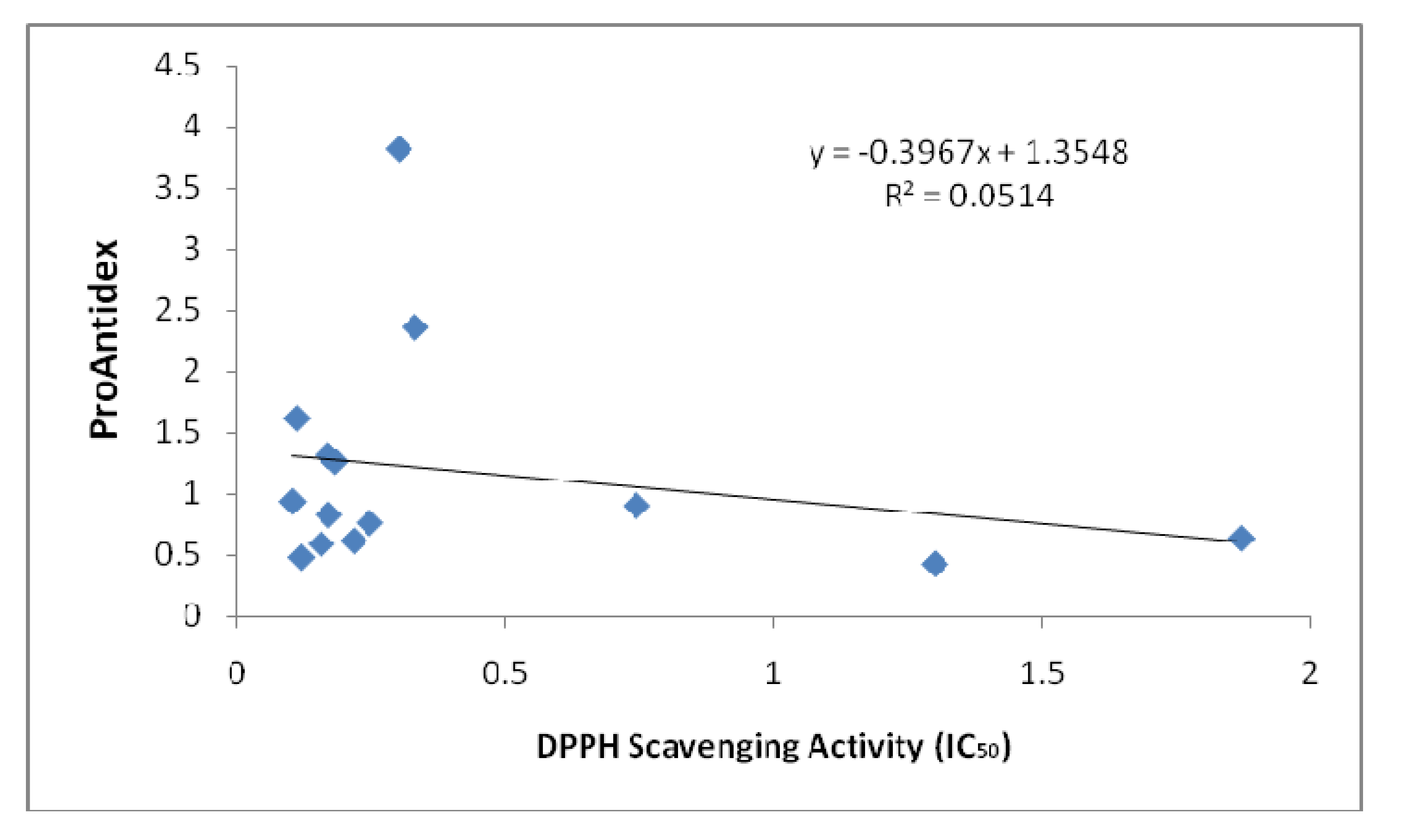 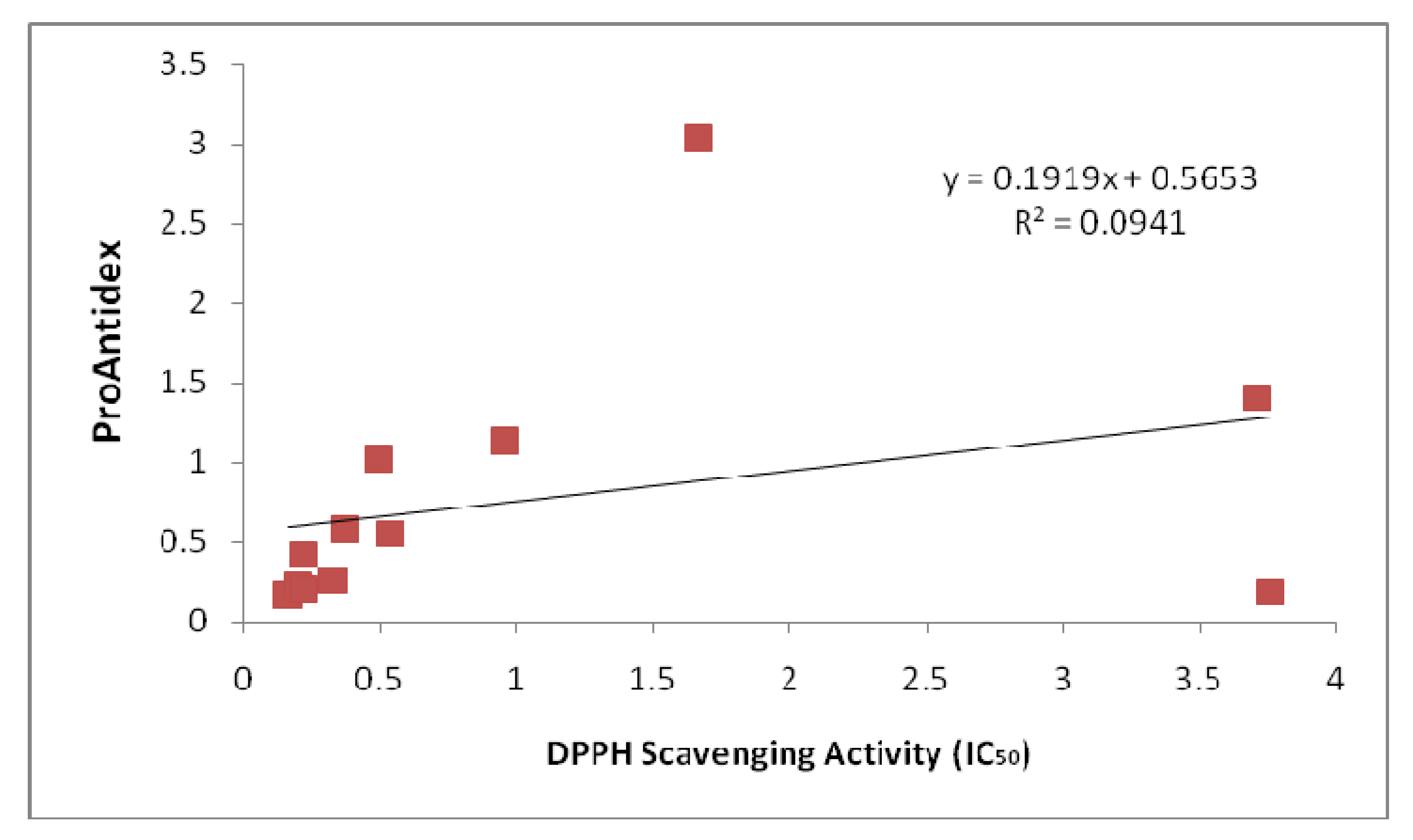 Fresh Malaysian plants were obtained from Klang Valley in Malaysia. The plants were authenticated by a botanist at the Herbarium of the Forest Research Institute of Malaysia (FRIM, Kepong, Malaysia). The selected plants in this study were Azadirachta indica leaf, Mangifera indica leaf, Garcinia mangostana peel, Nephelium lappaceum leaf and peel, Psidium guajava leaf, Fragaria x ananassa leaf, Lawsonia inermis leaf, Syzygium aqueum leaf, Peltophorum pterocarpum leaf and bark, Artocarpus champeden leaf and Nephelium mutobile leaf. The standards used in this study were vitamin C, green tea, EmblicaTM and Vitis vinifera seed.
The leaves were washed with copious amounts of water followed by distilled water and then allowed to air dry at room temperature. They were then placed in an oven at 40 °C until completely dry, after which they were pulverized using a Waring blender or milled using a Fritsch dry miller. Water and solvent extraction: deionized water or the respective solvents (analytical grade) at 1:10 (w/v) concentrations were added to the powderized leaves. Water extraction was carried out at 40 °C while solvent extraction at room temperature for 24 hours in an orbital shaker. The suspension thus obtained was filtered using a 114 Whatman filter paper and filtrate collected. Aqueous filtrate was concentrated using a freeze drier while organic solvent filtrates were concentrated using a rotary evaporator.
Scavenging activity on DPPH (1,1-diphenyl-2-picrylhydrazyl) free radicals by the extracts was assessed according to method reported previously [13]. A total of 950 µL of 0.004% DPPH ethanolic solution was added to 50 µL of an extract of different concentrations to make a final volume of 1 mL and the mixture was allowed to react at 37 °C. All determinations were performed in triplicate. After 10 minutes, the absorbance value was measured at 515 nm with Cary 50 Bio UV-visible spectrophotometer. The negative control used was 950 µL DPPH solution in ethanol with 50 µL of ethanol/distilled water while the positive controls used were L-ascorbic acid (vitamin C), green tea and grape seed.
Scavenging activity in this assay was expressed as IC50, which represents the concentration of the extract (mg/ml) required to inhibit 50% of the free radical scavenging activity. The optical density obtained was converted into of free radical scavenging activity by using the formula:
The IC50 values were calculated by linear regression of plots where x-axis represented the various concentrations (0.03125 mg/mL–5 mg/mL) of test plant extracts while the y-axis represented the average percentage of free radical scavenging activities from three replicates. The IC50 values of samples were compared against the standards, L-ascorbic acid and grape seed extract, and the lower the IC50 of a plant extract, the better it is as an antioxidant.
Reducing power of iron ion was measured according to the method of Ling et al. [18]. Equal volumes of the extract and 1% potassium ferricyanate [K3Fe(CN6)] were incubated at 50 °C for 20 minutes. An equal volume of 10% trichloroacetic acid was then added and mixture centrifuged at 3,000 g for 10 minutes. The upper layer of the solution (1.0 mL) was mixed with 1 mL of distilled water and 0.2 mL of 0.1% ferric chloride (FeCl3) and its absorbance recorded at 700 nm. Ethanol or distilled water was used as negative control while L-ascorbic acid, green tea, grape seed and EmblicaTM (a commercial antioxidant with very low pro-oxidant activity) was used as positive controls.
The pro-oxidant activities were calculated by linear regression of plots where x-axis represented the various concentrations (0.1 mg/mL–6 mg/mL) of test plant extracts while the y-axis represented the absorbance of the test plant extracts.
A net antioxidant potential was devised using the ratio of pro-oxidant activities at absorbance of 1.0 to the IC50 DPPH scavenging activity in both the total aqueous and ethanolic extracts. This ratio represents an index (ProAntidex) of the net free radical scavenging ability of whole plant extracts. The lower the ProAntidex parameter of the sample, the more efficient would be expected of the sample in neutralizing free radicals:
Each of the measurements described was carried out in three replicate experiments for different batches of the samples. Results are reported as mean ± standard deviation. Statistical analyses were performed by an analysis of variance (One-way ANOVA and nonparametric) using Dunnett tests for comparisons of samples with the control. A value of P < 0.05 was considered significant.

This research work was supported in part by research grants from the Ministry of Science, Technology and Innovation and postgraduate student grant from University of Malaya. We would like also to thank Ms. Jamunaa for her assistance in the preparation of the manuscript.