Synthesis, Crystal Structure, and Kinetics of the Thermal Decomposition of the Nickel(II) Complex of the Schiff Base 2-[(4 Methylphenylimino)methyl]-6-methoxyphenol
Previous Article in Journal

Extraction of Oil from Wheat Germ by Supercritical CO2 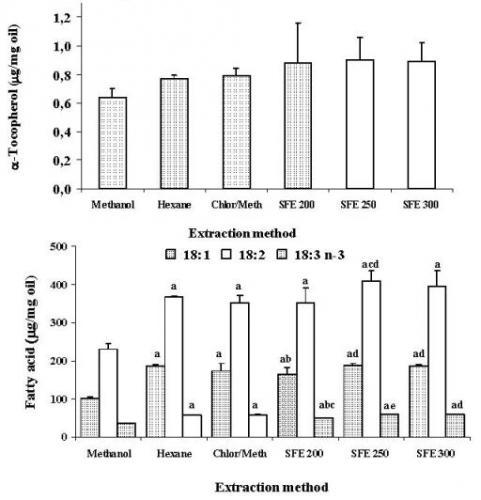 Fats and oils play an important role in the food industry and are essential part of human nutrition. Vegetable oils provide fat-soluble vitamins such as vitamins A, D, E, and K, and are also source of essential unsaturated fatty acids, which cannot be synthesized by the human body. In order to meet nutritional requirements, new vegetable oil resources are being sought as sources of these vitamins and essential fatty acids.
Wheat germ oil has the highest tocopherol content of all vegetable oils, up to about 2,500 mg/kg, and also the highest content of α-tocopherol, which represents around 60% of the total content [1]. Wheat germ oil is also highly valued for its high content of unsaturated fatty acids: it has about 80%, consisting mostly of linoleic (18:2) and linolenic (18:3) acids [2], both of which are of great importance in human metabolism and cannot be synthesized by the organism. They are precursors of a group of hormones called prostaglandins, which play an important role in muscle contractions and in the proper healing of inflammatory processes [3]. Furthermore, linoleic acid [4] helps to eliminate cholesterol and is a precursor of cell membrane phospholipids [4].
Wheat germ is a by-product of the wheat milling industry. Germ constitutes about 2-3% of the wheat grain and can be separated in a fairly pure form from the grain during the milling process [5]. Wheat germ contains about 11% oil [6]. Wheat germ oil is used in products such as foods, biological insect control agents, pharmaceuticals and cosmetic formulations [7]. Polyunsaturated fatty acids and bioactive compounds are prone to oxidation and degradation under the conditions used for conventional edible oil extraction and refining methods [8].
Solvent extraction is a common method of extraction of oils from vegetable matter. In recent years supercritical fluid extraction (SFE) has received increased attention as an important alternative to conventional methods. Supercritical fluids have adjustable extraction characteristics due to their density, which can be controlled by changes in pressure or temperature. In addition, other properties such as low viscosity, high diffusivity and low surface tension enhance the solute mass transfer from inside a solid matrix. Supercritical carbon dioxide (SC-CO2), being nontoxic, nonflammable, inexpensive and easily separable from the extracts, has been the most frequently used extractant in the food and pharmaceutical industries [9,10,11]. Furthermore, the low critical temperature of carbon dioxide allows extraction of thermolabile compounds without degradation. Use of supercritical fluid such as carbon dioxide for extraction of wheat germ oil has previously been reported by several research groups [12,13,14,15,16,17,18]. Amoung these, Panfili et al. [12] studied the effect of pressure, temperature, extraction time and wheat germ oil particle size on oil extraction yields. They found that fatty acids composition not change while the greatest concentration of α-tocopherol was found in the fraction sample at 75 min (P= 38 MPa, T= 55 °C, particle size= 0.35 mm).
According to Taniguchi et al. [13] the α- and β-tocopherol content of supercritical carbon dioxide extracted oil were similar to those of hexane extracted oil. However, Molero Gomez and Martinez de la Ossa [14] reported higher tocopherol content in the SC-CO2 extracted material, as compared to that of the hexane extracted oil. Shao et al. [15] found that the fatty acid composition of germ oil extracted by SFE was similar to the oil extracted by hexane. Eisenmenger and Dunford [16] also showed that methods used for oil extraction and refining did not have a remarkable effect on the fatty acid composition of the oil, whereas SC-CO2 extracted oil had a higher tocopherol content than that of commercially hexane extracted oil. Ge et al. [17] reported that the yield of α-tocopherol extracted by SFE-CO2 were much higher than those prepared by chloroform/methanol extraction. However, the solution of chloroform/methanol showed a stronger solvent power to extract β-tocopherol form wheat germ. Finally, Zacchi et al. [18] found that petroleum ether extracted oil showed the highest values for fatty acids and tocopherol contents.
The aim of this work is to study the effects of pressure and extraction time on the extraction efficiency and oil quality.

Figure 1 shows the influence of operating pressure on the extraction yield. An extraction time of 8 h at 300 bar gives wheat germ oil yield above 9% (w/w), oil recovery about 80%. The SC-CO2 gives an extraction yield not significantly different from organic solvent extraction. A comparison is made between the relative qualities of the oils produced by SC-CO2 and by organic solvent extraction (hexane, methanol, chloroform-methanol 2:1 mixure) in Figure 2. The difference is interpreted that the organic solvents are much less selective than CO2 in the extracted oil and produce oil containing some undesirable compounds. 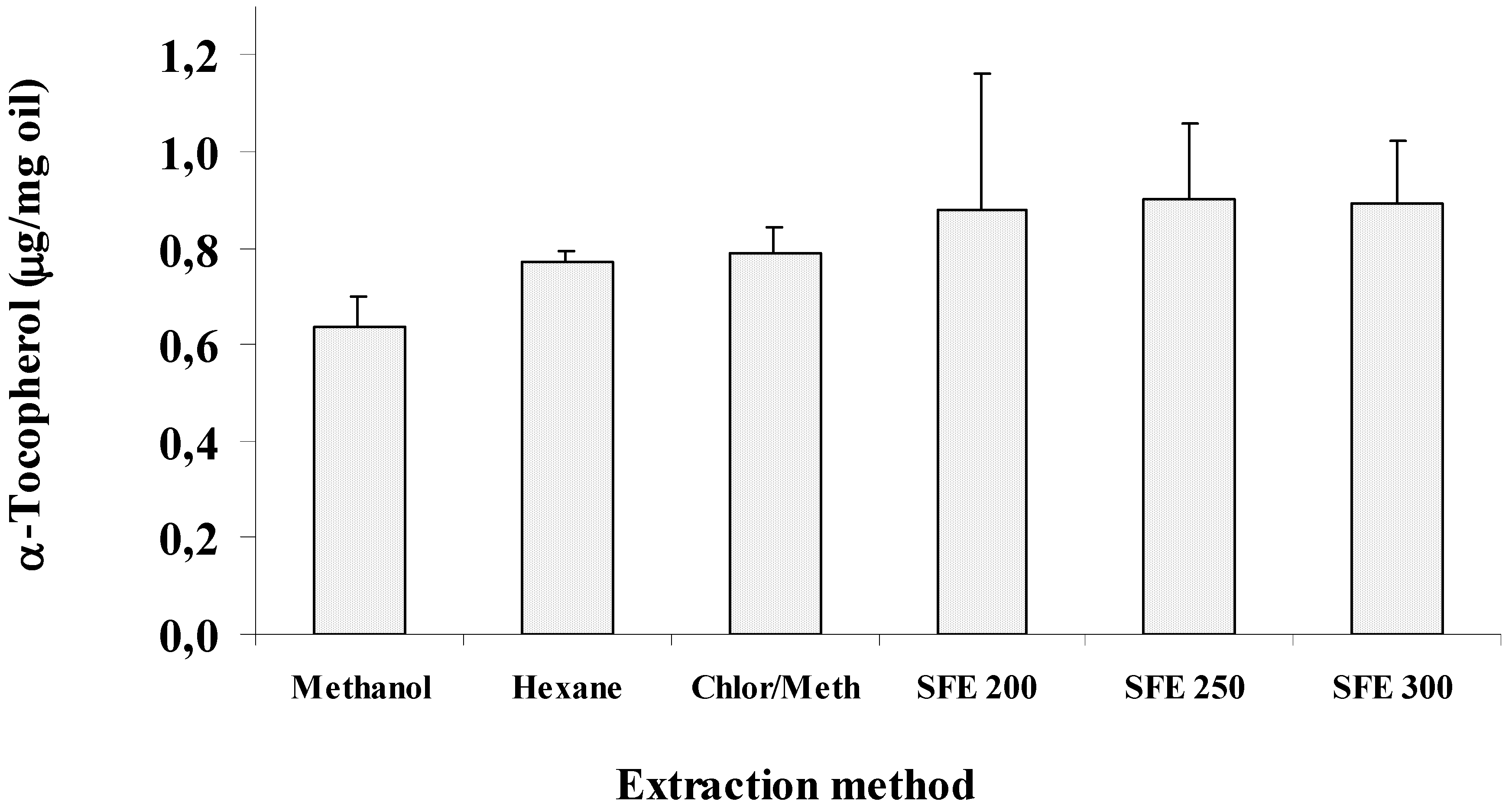 The oxidation status of fatty acids was also measured by HPLC detection of conjugated dienes fatty acids hydroperoxides (HP). The level of the oxidative products HP in the oils extracted by SC-CO2 ranged from 12 to 14 nmol/mg oil, values comparable to those measured in oils obtained by solvent extraction (10-15 nmol/mg oil), and prevalently derived from 18:2 n-6 degradation, due to the great content of this fatty acid and the high stability of its hydroperoxides [19].
Our results confirm previous reports indicating no significant quality differences in SC-CO2 extracted wheat germ oil compared to solvent extracted oil. In conclusion, supercritical carbon dioxide extraction has immediate advantages over traditional extraction techniques: it is a flexible process due to the possibility of continuous modulation of the solvent power/selectivity of the SC-CO2, allows the elimination of polluting organic solvents and of the expensive post-processing of the extracts for solvent elimination.

All solvents used, of the highest available purity, were purchased from Merck (Darmstadt, Germany). Triolein, trilinolein, fatty acids and fatty acids methyl esters standards, and desferal (deferoxamine mesylate salt) were purchased from Sigma–Aldrich (Milan, Italy). The reagent 20% BF3 in MeOH was purchased from Supelco (Bellefonte, PA, USA). cis,trans-13-Hydroperoxy-octadecadienoic acid (c,t-13-HPODE) and cis,trans-9-hydroperoxyoctadecadienoic acid (c,t-9-HPODE) were purchased from Cascade (Cascade Biochem. Ltd., London, U.K.). All other chemicals used in this study were of analytical grade. Flaky food-grade wheat germ was supplied from Sos Ortos (Ozieri, Italy). Before using the vegetable matter was ground with a Malavasi mill (Bologna, Italy) and the particle sizes were in the 180-250 μm range.

Total lipids were extracted from aliquots (100 mg) of wheat germ by addition of CHCl3/MeOH (12 mL, 2/1, v/v) solution [20], or MeOH (8 mL) at room temperature, in order to avoid fatty acids oxidation. After filtration, aliquots of the CHCl3 or MeOH phase (250 μL) were collected and total lipids were quantified by the method of Chiang, Gessert and Lowry [21]. Solvent extraction was also performed with hexane in a Soxhlet apparatus for 16 h, as standard and reference method for the extraction of fats and oils from food matrices.

Supercritical CO2 extractions were performed in a laboratory apparatus [22,23], equipped with a 400 cm3 extraction vessel and two separator vessels of 300 and 200 cm3 respectively connected in series. Extraction was carried out in a semi batch mode: batch charging of vegetable matter and continuous flow solvent. The extraction of the wheat germ oil was obtained working at 40°C at 200, 250 and 300 bar in the extraction vessel and by using only one separator (at 20 bar and 15°C ) to recover the extract.

3.4. Preparation of α-tocopherol and fatty acids

Analysis of unsaturated fatty acids was carried out with an Agilent Technologies 1100 liquid chromatograph. Analyses of unsaturated fatty acids and conjugated diene fatty acid hydroperoxides (HP)[24], detected at 200 and 234 nm respectively, were carried out with a Chrompack column, Inertsil 5 ODS-2 (150 mm × 4.6 mm, 5 μm particle size) with a mobile phase of CH3CN/H2O/CH3COOH (70/30/0.12, v/v/v) at a flow rate of 1.5 mL/min. The identification of the peaks was made using standard compounds and second derivative as well as conventional UV spectra, generated using the Agilent Chemstation A.10.02 software. The amount of α-tocopherol was measured by electrochemical detection [24], using a Thermo Separation Products (Milan, Italy) P1000 pump equipped with an electrochemical detector INTRO (Antec Leyden, Leiden, The Netherlands). An automatic injector, Triathlon (Spark Holland BV, AJ Emmen, The Netherlands) was used. A C-18 Hewlett Packard ODS Hypersil column, 5 μm particle size, 100 × 2.1 mm, was used with a mobile phase of MeOH/CH3COONa 0.05M pH 5.5 (95/5, v/v) at a flow rate of 0.3 mL/min. The electrochemical detector was set at an oxidizing potential of 0.6 V. Data were collected and analysed using the Agilent Chemstation A.10.02. software. Quantification of vitamin E was performed using a standard reference curve.

Fatty acid methyl esters were measured on a Hewlett-Packard HP-6890 gas chromatograph (Hewlett-Packard, Palo Alto, CA, USA) equipped with a flame ionisation detector and a cyanopropyl methyl-polysiloxane HP-23 FAME column (30 m x 0.32 mm x 0.25 μm) (Hewlett-Packard) [26]. Nitrogen was used as carrier gas at a flow rate of 2 mL/min. The oven temperature was programmed from 45 °C to 175 °C at a rate of 80 °C/min and held for 45 min; injector temperature was set at 250 °C, and detector temperature at 300 °C. The fatty acid methyl esters were identified by comparing the retention times with those of standard compounds. The percentage composition of individual fatty acids were calculated using a calibration curve with components injected at different concentrations, using the Hewlett-Packard A.05.02 software.

© 2009 by the authors; licensee Molecular Diversity Preservation International, Basel, Switzerland. This article is an open-access article distributed under the terms and conditions of the Creative Commons Attribution license ( http://creativecommons.org/licenses/by/3.0/).