Phospholipids: Key Players in Apoptosis and Immune Regulation
Next Article in Special Issue

The diversity of selenoproteins raises the question of why so many life forms require selenium. Selenoproteins are found in bacteria, archaea, and many eukaryotes. In photosynthetic microorganisms, the essential requirement for selenium has been reported in 33 species belonging to six phyla, although its biochemical significance is still unclear. According to genome databases, 20 species are defined as selenoprotein-producing organisms, including five photosynthetic organisms. In a marine coccolithophorid, Emiliania huxleyi (Haptophyta), we recently found unique characteristics of selenium utilization and novel selenoproteins using 75Se-tracer experiments. In E. huxleyi, selenite, not selenate, is the main substrate used and its uptake is driven by an ATP-dependent highaffinity, active transport system. Selenite is immediately metabolized to low-molecular mass compounds and partly converted to at least six selenoproteins, named EhSEP1–6. The most (EhSEP2) and second-most abundant selenoproteins (EhSEP1) are disulfide isomerase (PDI) homologous protein and thioredoxin reductase (TR) 1, respectively. Involvement of selenium in PDI is unique in this organism, while TR1 is also found in other organisms. In this review, we summarize physiological, biochemical, and molecular aspects of selenium utilization by microalgae and discuss their strategy of selenium utilization. View Full-Text
Keywords: Emiliania huxleyi; selenoprotein; selenite uptake; alga; thioredoxin reductase Emiliania huxleyi; selenoprotein; selenite uptake; alga; thioredoxin reductase
►▼ Show Figures 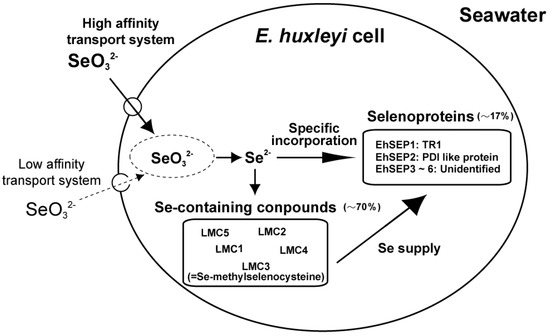