Application of the Molecular Combing Technique to Starch Granules

Practical adhesion of rubber to aluminum is measured for various aluminum silanization treatments. In this study, 6-(3-triethoxysilylpropylamino)-1,3,5-triazine-2,4-dithiol (TES) was used as the coupling agent for preparing self-assembly monolayers (SAMs) on an aluminum surface. The structure and chemical composition of the SAMs were analyzed using Fourier transform infra-red spectroscopy (FT-IR) and X-ray photoelectron spectroscopy (XPS). The changes in the surface features of the aluminum surface due to TES treatment were investigated by atomic force microscopy (AFM). The adhesive properties of the silanized aluminum surface and EPDM rubber have been evaluated by a T-peel strength test. The results suggested that the Si-O-Al bonding at aluminum TES interface existed and a TES self-assembly monolayer was formed on the aluminum surface. More than 6.0 KN/m adhesion strength is obtained when the aluminum is silanized with 2.5 mmol/dm3 TES, cured at 160 °C and vulcanized with EPDM rubber at 160 °C for 30 min. It is suggested that the TES self-assembly monolayer is bound to aluminum through its ethoxysilyl functional group, and the thiol function group is strongly crosslinked to EPDM rubber, respectively. View Full-Text
Keywords: aluminum; rubber; self-assembly; monolayer; adhesion aluminum; rubber; self-assembly; monolayer; adhesion
►▼ Show Figures 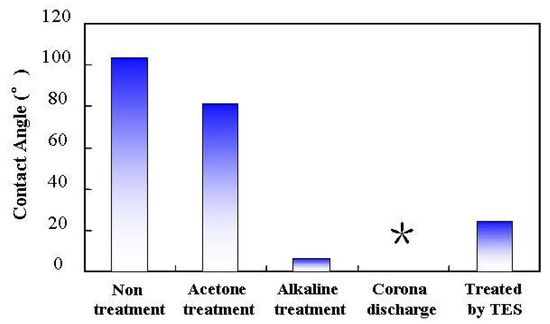