Nitroalkanes as Central Reagents in the Synthesis of Spiroketals

The spiroketal moiety is a key motif embodied in a large number of natural products present in plants, fungi, insect secretions, shellfish toxins and other living organisms [1,2,3,4,5]. Many of these compounds also display a considerable biological activity as antibiotics and pheromones. From a synthetic standpoint, among various practical strategies currently available for the assembling of the spiroketal unit, the one based on the acid promoted intramolecular acetalization of dihydroxy ketone derivatives 1 firmly occupies a prominent position (Scheme 1).

The ring size of the resulting spiro compounds 2 can be suitably tuned by a careful choice of the carbon tethers linking the hydroxy and the carbonyl functions. The enhanced thermodynamic stability of the ketal system in compounds 2 usually makes unnecessary the continuous removal of water from the reaction mixture as usually needed for the intermolecular version of this process. Syntheses of dihydroxy ketone precursors of spiroketals enjoy the rich chemistry pertaining to the carbonyl group. Nucleophilic substitution onto carboxylic acid derivatives, alkylation of ketone enolates, aldol condensations and conjugate addition of ketone enolate equivalents to Michael acceptors are the most exploited synthetic routes to access dihydroxy ketone derivatives [6,7]. Dithianes are well known acyl anion equivalents that can be profitably employed in alkylation reactions after metalation using strongly basic reagents. Their utilization in the synthesis of natural products including spiroketal systems has been recently reviewed [8]. Nitroalkanes represent a formidable source of stabilized carbanions since the high electron-withdrawing power of the nitro group provides an outstanding enhancement of the hydrogen acidity at the α-position [9]. Nitronate anions 4 that can be generated in mild basic condition from nitroalkanes 3 act as carbon nucleophiles with common electrophilic reagents including haloalkanes, aldehydes and Michael acceptors, leading to carbon–carbon bond formation (Scheme 2) [10,11,12].

The ability of the carbon-nitrogen bond in adducts 8 to be converted into a carbonyl group 9 by means of a Nef reaction [13], ultimately leads to a reversal of polarity of the neighboring carbon atom from nucleophilic to electrophilic, making nitroalkanes effective acyl anion equivalents (Scheme 3).

This account reports on the utilization of nitroalkanes as versatile reagents capable of promoting the carbon-carbon bond formation and then, upon their conversion into a carbonyl group, allowing the formation of the required electrophilic function to obtain the spiroketal framework.

Conjugate addition of nitroalkanes to enones provides a rapid entry to 1,4-difunctionalized derivatives. Particularly, nitromethane (10) can be regarded as a d1,d1 multiple coupling reagent corresponding to a carbonyl dianion synthon (Scheme 4) [14]. 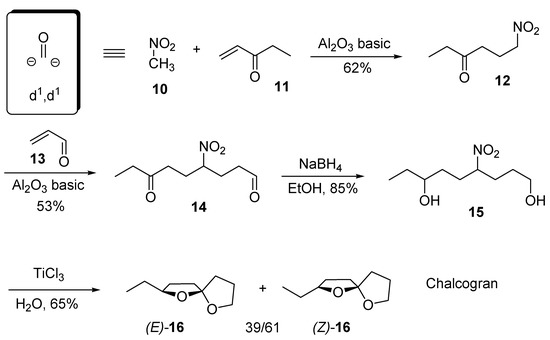 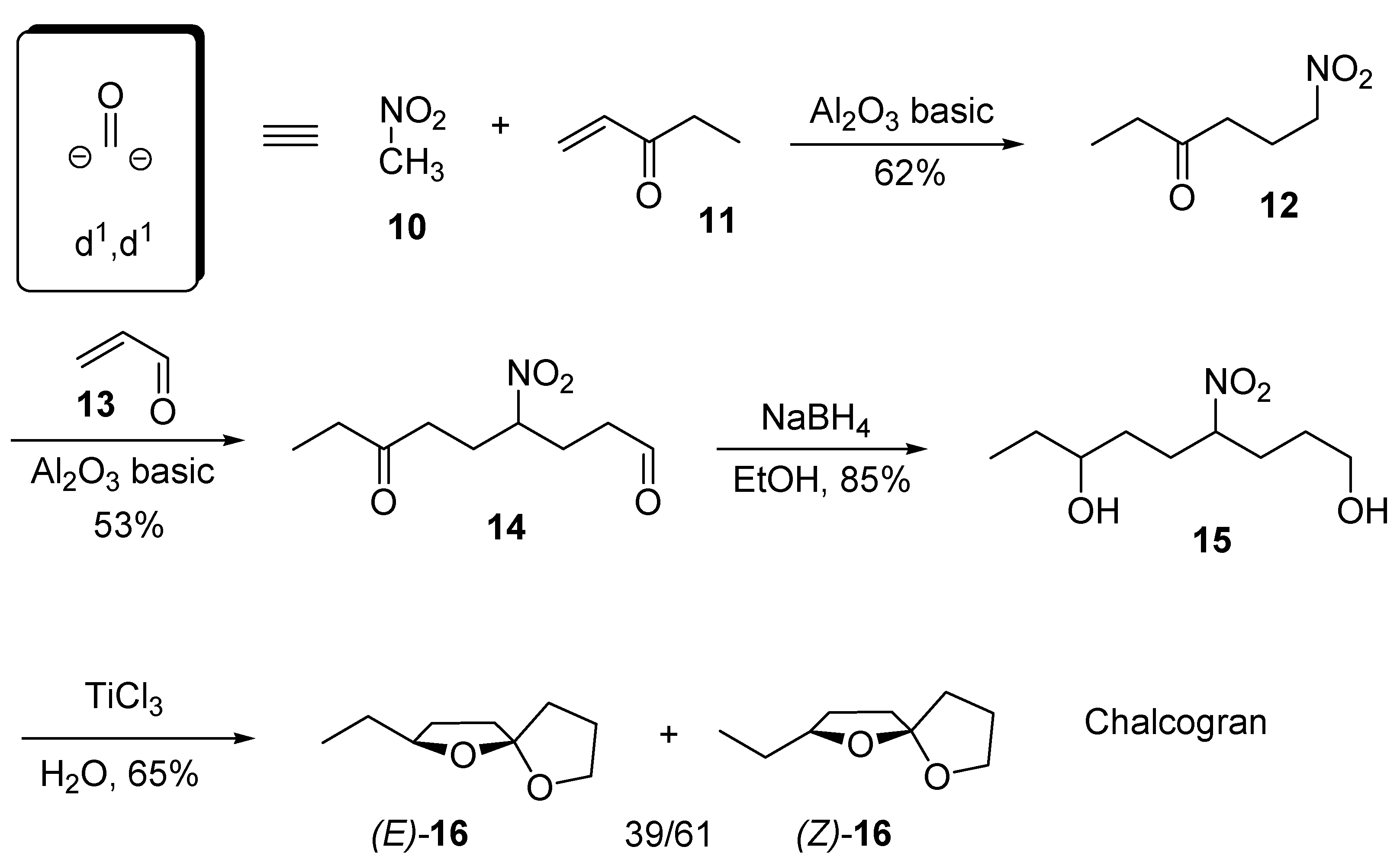 A double Michael addition of nitromethane using two different α,β-unsaturated carbonyl derivatives can be used as key strategy for the preparation of racemic 2-ethyl-1,6-dioxaspiro[4.4]nonane (16), known as chalcogran, the main component in the aggregation pheromone of the bark beetle Pityogenes chalcografus (L) [15]. Addition of nitromethane (10) to 1-penten-3-one (11) in the presence of basic alumina under solventless conditions, affords the corresponding 4-nitro ketone 12 that is suitable for a subsequent 1,4-addition to acrolein (13) under the same conditions leading to nitro diketone 14. Reduction of the carbonyl groups with NaBH4 generates the diol system 15, while the nitro to carbonyl conversion is easily accomplished by a reductive procedure using an aqueous solution of TiCl3. This transformation is followed by a spontaneous spiroketalization that produces chalcogran 16 as a mixture of stereoisomers in 20% overall yield.
The two conjugate additions can be combined in a single operation when symmetrical 2,7-dialkyl-1,6-dioxaspiro[4.4]nonane systems are needed as demonstrated in the examples portrayed in Scheme 5 [16]. Basic alumina can be profitably substituted by a macroreticular resin with basic character (Amberlyst A21) also working under solventless conditions. Washing the resin with acetonitrile affords a solution of the nitro diketone that upon addition of water and NaBH4 leads to the nitro diol 18. The Nef conversion is then carried out under classical hydrolytic conditions converting the nitro group into the corresponding nitronate anion that suffers a cleavage in strongly acidic conditions. The obtained spiroketals 19 are components of the pheromone mixture in insects of the Andrena species.

Enantioselective reduction of nitro diketones 20 using baker’s yeast or diisopinocampheyl-chloroborane (DIP-ClTM) provides a straightforward entry to optically active nitro diols 21 (Scheme 6) [17,18]. The level of enantioselection is usually high (ee > 95%) and, quite interestingly, reduction of each carbonyl group seems to proceed independently, since no meso forms of nitro diols 21 are found in the reaction mixture. Since DIP-ClTM is commercially available in both enantiometic forms, it is possible with this reagent to prepare (R,R)- and (S,S)-21. The nitro to carbonyl conversion of some compounds (S,S)-21 generates the corresponding spiroketals 22 in moderate to good yields, but with modest stereoselectivity. 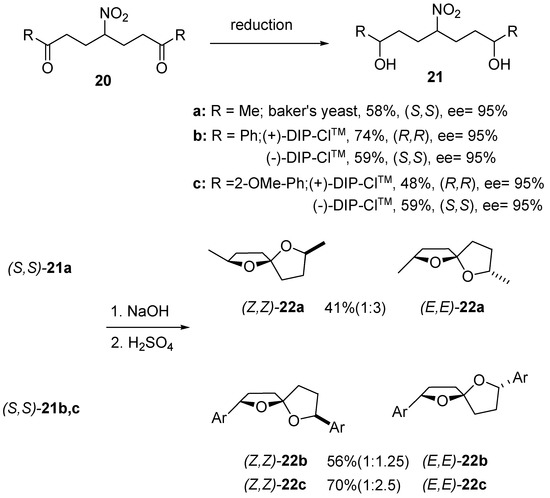 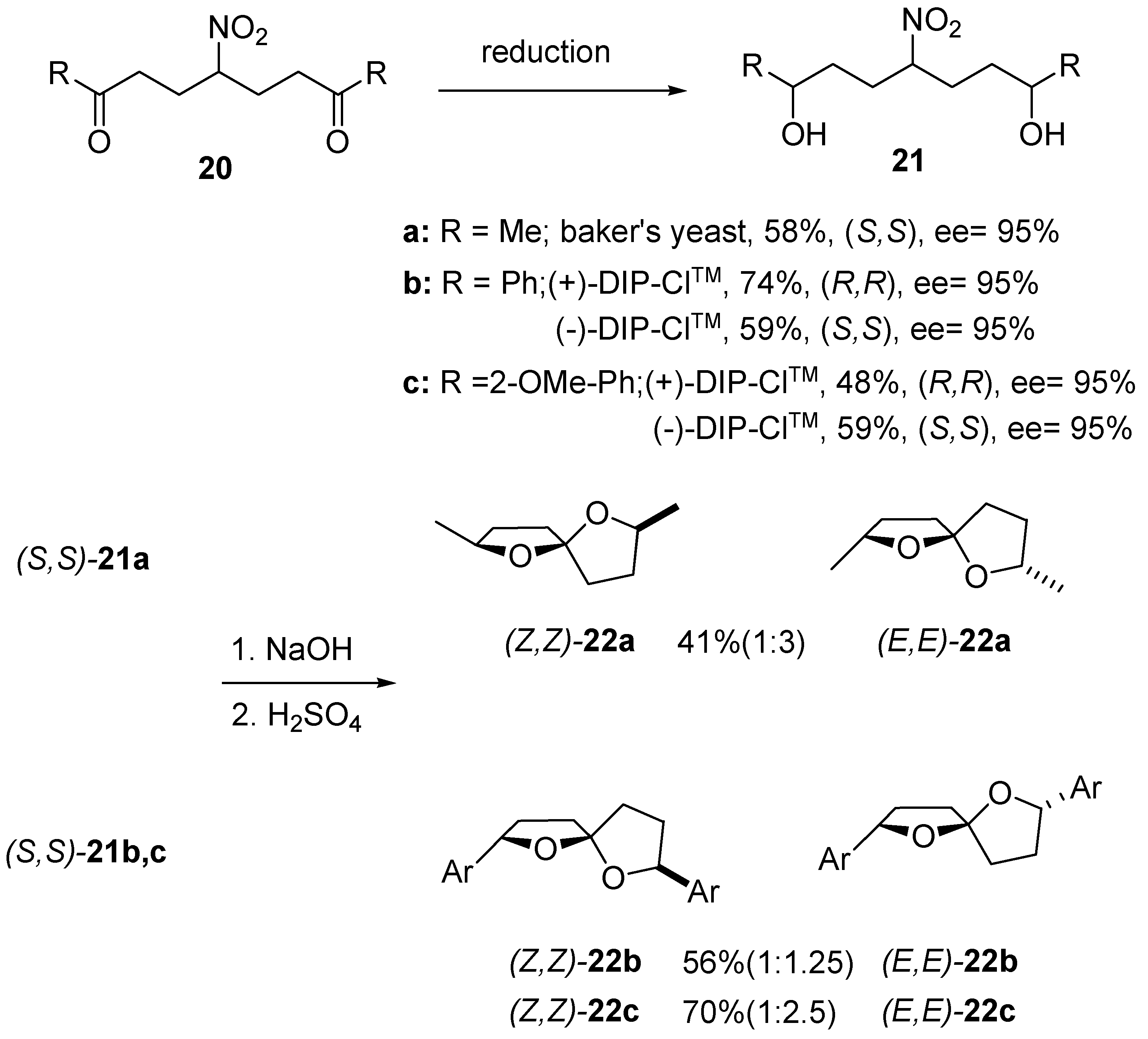 The assembly of the 1,6-dioxaspiro[4.5]decane skeleton requires a different synthetic approach since the oxane ring can only be formed through a ring closure involving a 1,5 relationship between the carbon atoms bearing the hydroxy and the nitro groups. A component of odors of the common wasp Paravespula vulgaris, namely (E)-7-methyl-1,6-dioxaspiro[4.5]decane (28) can be efficiently prepared starting from 1-bromo-5-hexene (23) that upon a Wacker-type oxidation with benzoquinone in the presence of Pd(II)/Cu(II) salts gives ketone 24 (Scheme 7) [19]. The required 1-nitrohexan-5-one (25) obtained by nucleophilic displacement of the bromine atom using sodium nitrite, is then made to react with acrolein in the presence of Amberlyst A21, leading to nitro diketone 26. Reduction of the carbonyl groups and Nef reaction complete the synthesis of spiroketal 28 in good overall yield and high stereoselectivity. The exclusive formation of the E stereoisomer for compound 28 can be rationalized accounting for the strong conformational stabilization caused by the anomeric effect that forces the oxygen atom of the furanose ring to occupy an axial position, while the methyl on the piranose ring is equatorial [20]. 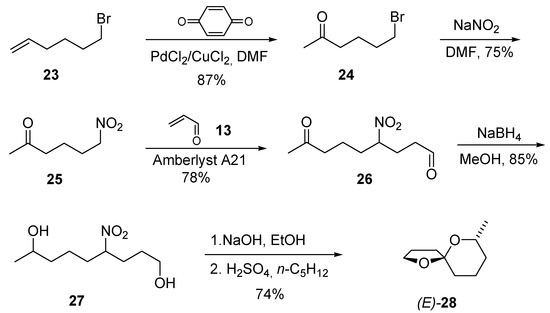 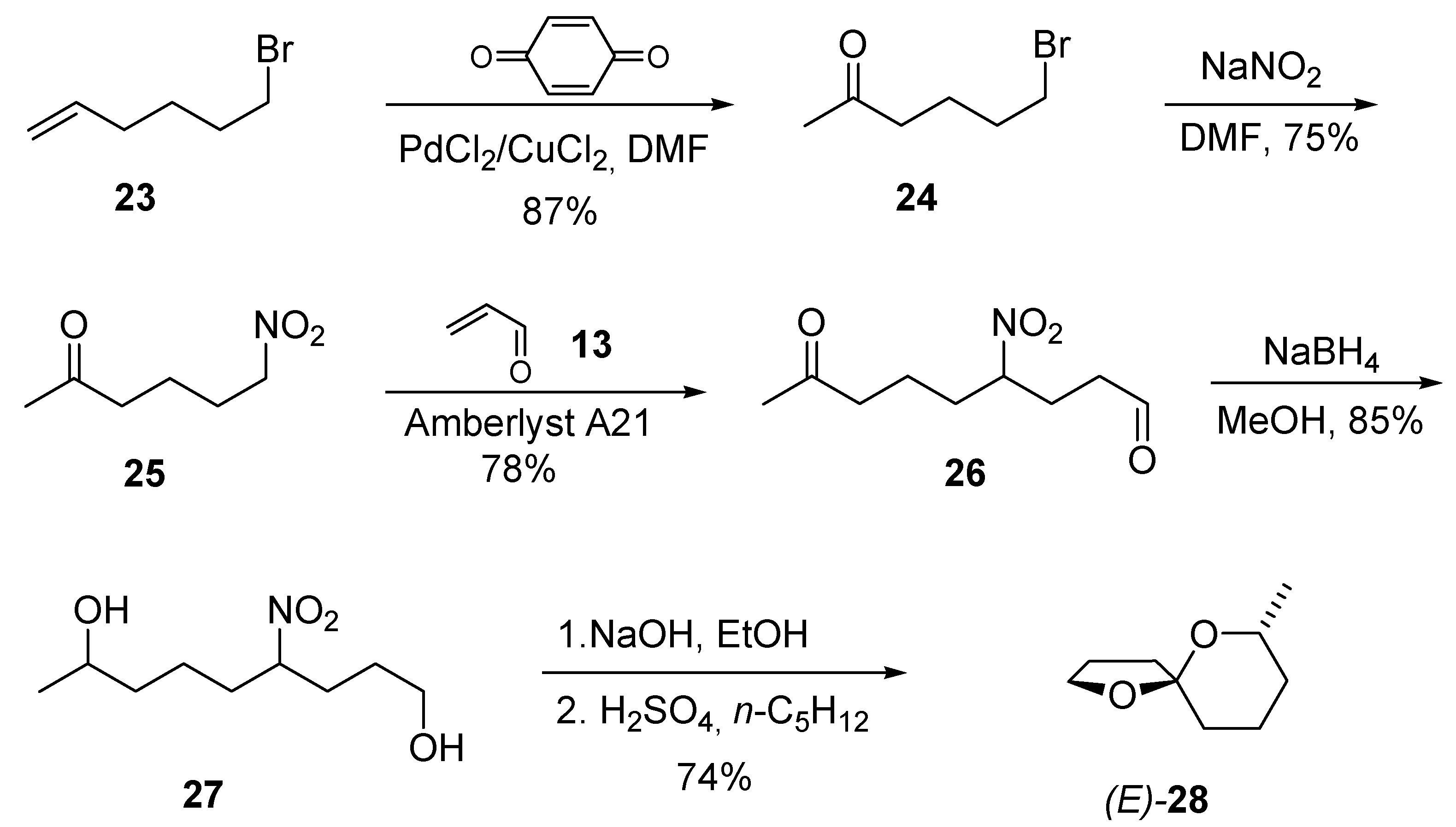 2-Nitrocycloalkanones can be considered as direct precursors of ω-nitro esters by way of an alcoholic retro-Claisen cleavage promoted by mild bases [21]. Therefore, conjugate addition of 2-nitro-cyclopentanone (29) to 1-buten-3-one (30) produces the expected adduct 31, which upon cleavage with KF in methanol affords ketoester 32 (Scheme 8). Complete reduction of the ester and keto groups in 32 using NaBH4 followed by usual nitro to carbonyl transformation gives a diastereomeric mixture of 2-methyl-1,6-dioxaspiro[4.5]decane (33), another component of the pheromone mixture of Paravespula vulgaris.

The previous synthetic approach can be extended to 2-nitrocyclohexanone (34, n = 2) that like compound 29, can be coupled with different enones 35 (Scheme 9) [22]. The following three synthetic operations, namely retro-Claisen cleavage, reduction and nitronate formation can be carried out on adducts 36 in a single step using NaBH4 in a mixture of acetonitrile/water (3:2). The intermediate nitronate 37 upon rapid hydrolysis directly affords spiroketals 38. Thus in conclusion, this versatile strategy also allows for a rapid entry to 1,6-dioxaspiro[4.6]undecane systems. 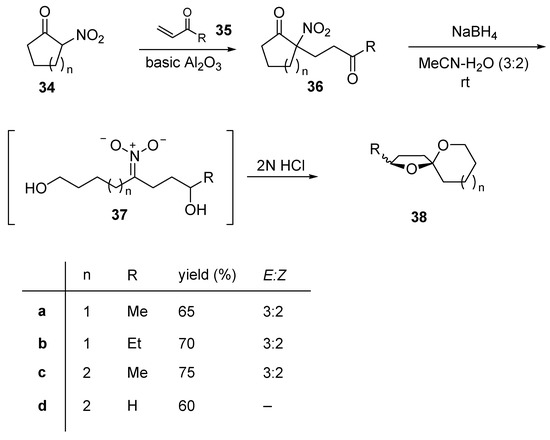 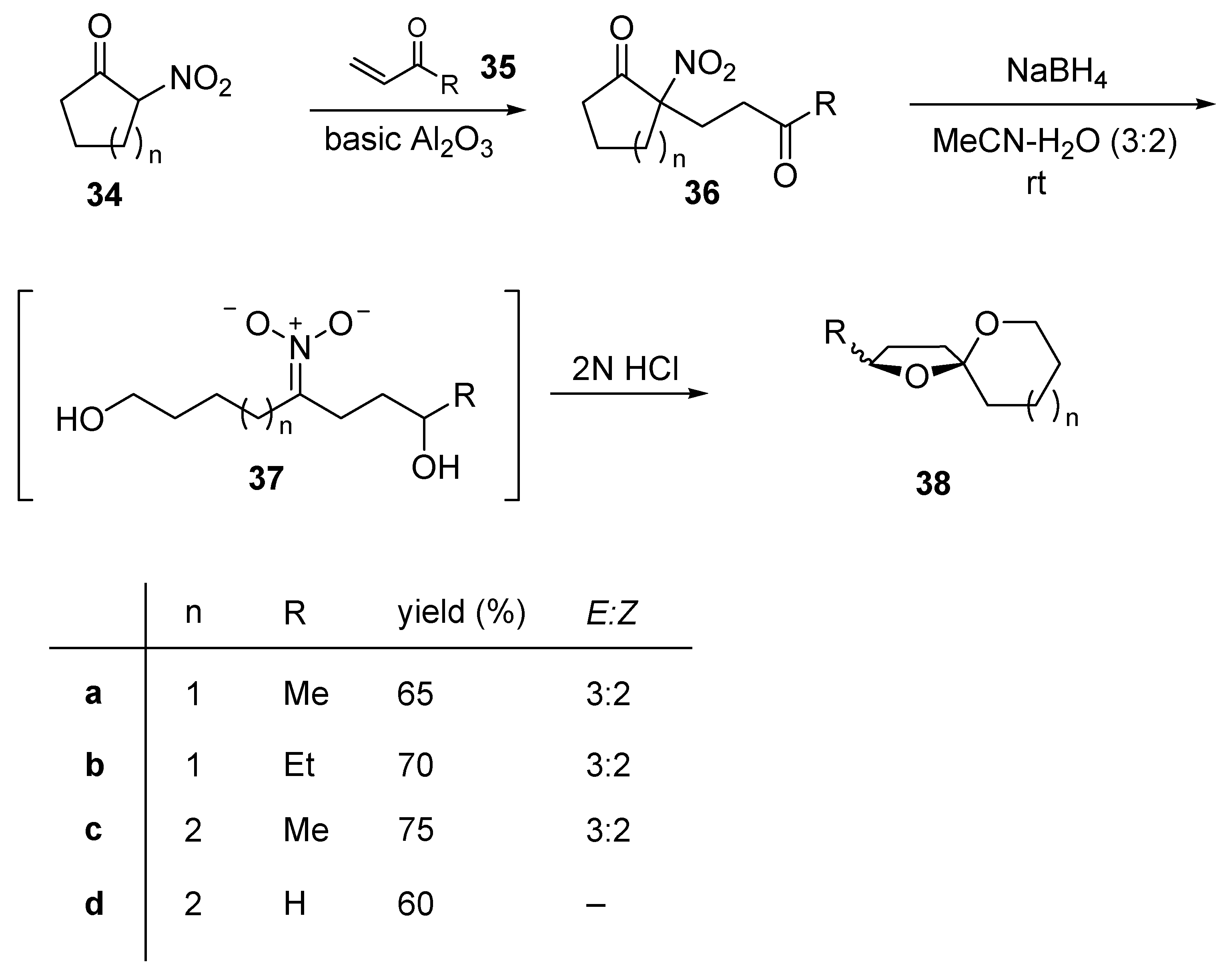 γ-Rubromycin is a pigment isolated from Streptomyces collinus particularly active against the reverse transcriptase of HIV-1. Like many other members of this class of compounds, γ-rubromycin is characterized by a bisbenzanellated 1,6-dioxaspiro[4.5]decane system that presents some challenging aspects from a synthetic standpoint.

Preliminary attempts at using a dithiane based strategy for the assembly of the dihydroxycarbonyl moiety were unsuccessful. Therefore, a different procedure involving the utilization of the nitrocompound chemistry was pursued. Starting from aldehyde 40, a nitroaldol reaction with nitromethane in aqueous media promoted by cetyltrimethylammonium bromide (CTABr), gives quantitatively the corresponding nitroalcohol 41 that upon dehydration and double bond reduction leads to 4-arylnitroalkane 42 (Scheme 10) [23,24]. A further nitroaldol reaction between nitro derivative 42 and arylaldehyde 43 represents the key step for the convergent synthesis of the carbon unit of the target molecule. Nitroalkene 44, which is directly obtained by this process, is reduced using Pearlman’s catalyst [Pd(OH)2/C] and after the Nef reaction, transformed into the spiroketal system 45 together with lesser amounts of uncyclized derivative 46. The latter compound slowly converts into 45 on standing, thus demonstrating that the rate of formation of the spiroketal framework is strongly affected by the nature of substituents present nearby the hydroxy groups. 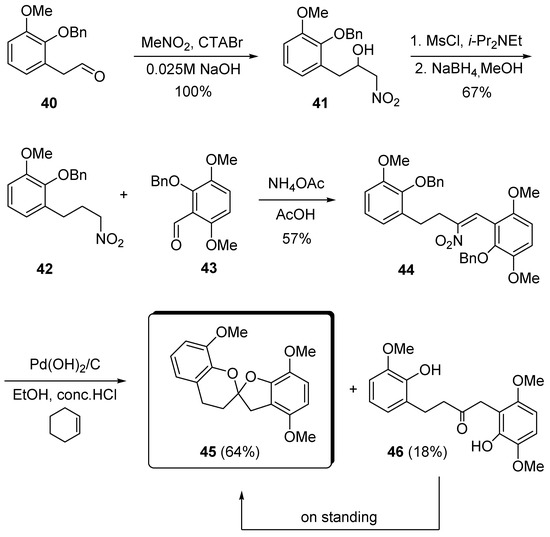 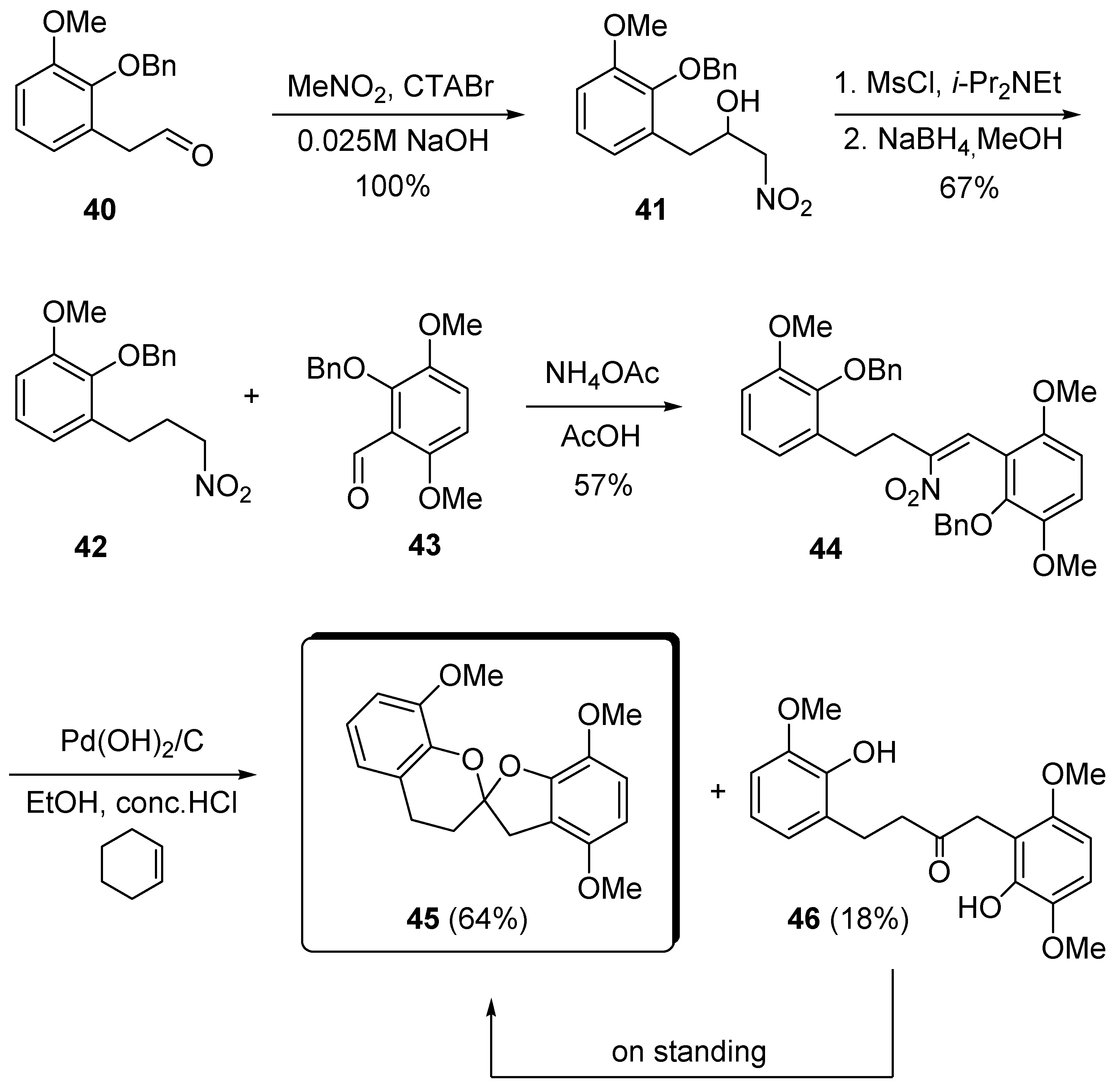 As previously observed, a major advantage pertaining to the chemistry of nitro compounds compared to that of strongly anionic systems (i.e. organometallic reagents and related unstabilized carbanions), concerns the relatively mild conditions needed to generate the corresponding nitronate anion. This important feature makes the protection of many common functional groups including keto and hydroxyl groups unnecessary. The Henry reaction between nitro alcohol 47 and O-protected hydroxyaldehydes 48 occurs efficiently under heterogeneous conditions leading directly to nitroalkenes 49 (Scheme 11) [25]. As usual, reduction of the nitroalkene double bond is also coupled with formation of the nitronate anion 50, that upon acidification undergoes succesive THP deprotection, Nef reaction and ketalization affording spiroketals 51. These compounds are the main component of the sex pheromones of the olive fruit fly (Dacus oleae) (51a) and Andrena haemorrhoa (51b). Following a related strategy in which a 5-nitroketone and a 4-hydroxyaldehyde are used for the nitroaldol reaction, other dialkyl-1,7-dioxaspiro[5.5]undecanes can be readily obtained [26]. 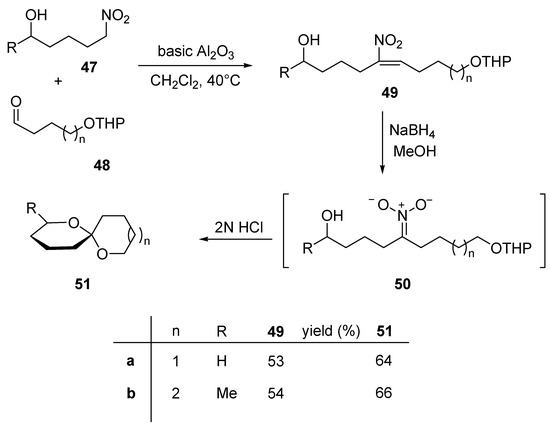 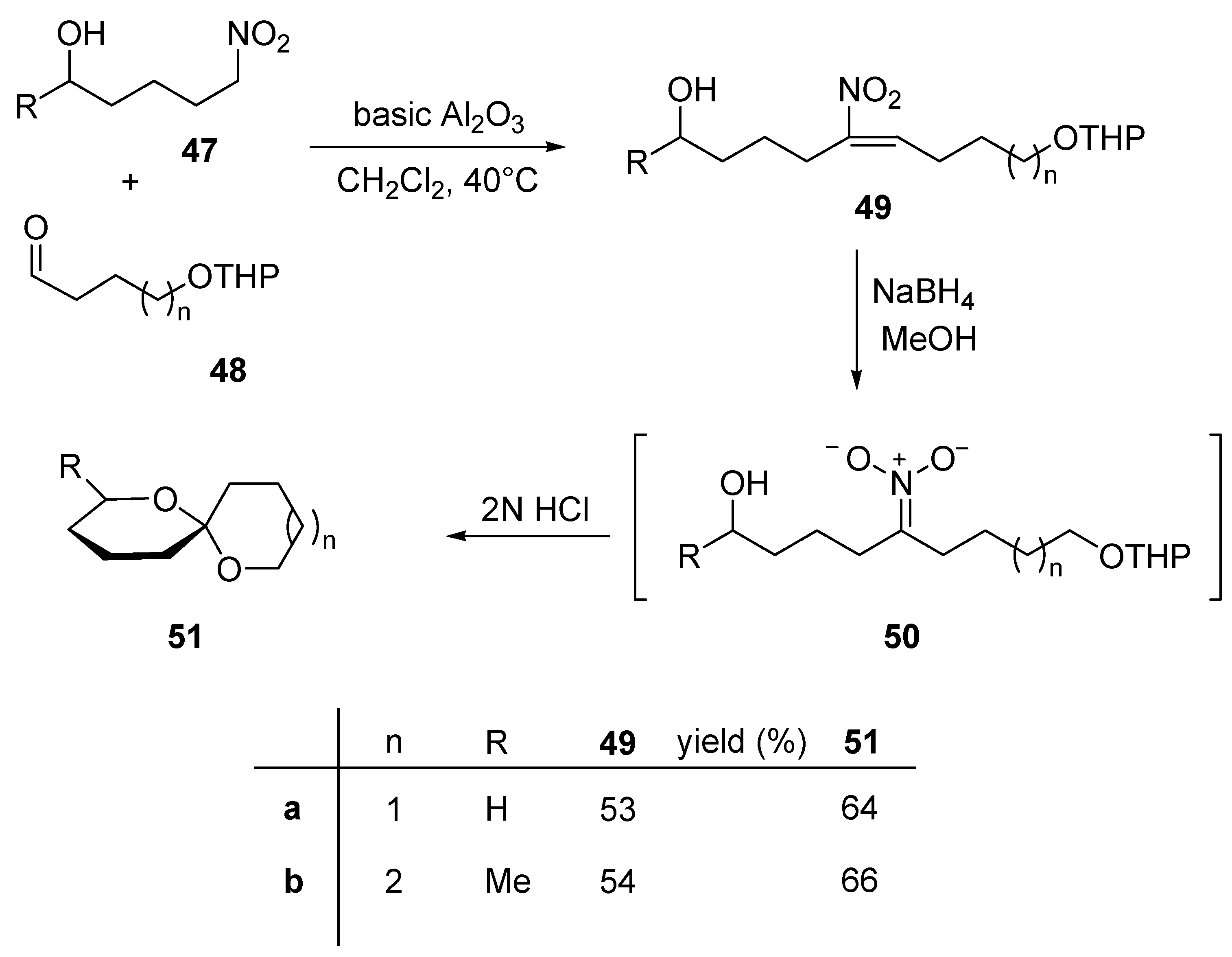 The previous synthetic methodologies as a whole, are based on the nitro to carbonyl conversion to generate the necessary keto group for the spiroketalization step. However, beside nitroaldol and conjugate addition reactions, other processes such as C-acylation of nitroalkanes are possible. This strategy entails a reductive removal of the nitro group once it has served for the insertion of the carbonyl moiety in the molecular framework. This strategy has been successfully applied to the preparation of optically active 2-methyl-1,7-doxaspiro[5.6]dodecane (58), a pheromone of Andrena haemorrhoa F starting from (S)-4-nitro-2-(t-butyldimethylsilyloxy)pentane (52, Scheme 12) [27]. Reaction of compound 52 with N-acetylimidazole (53) under basic conditions leads to nitroketone 54 that can be efficiently denitrated under radical conditions using tributyltin hydride. The introduction of a further carbon framework containing the second hydroxy group is realized by a regioselective alkylation of ketone 55 with chloroalkane 56. O-Protected dihydroxy ketone 57 albeit obtained in modest yield, can be readily hydrolyzed to give spiroketal 58 with excellent enantiomeric excess. 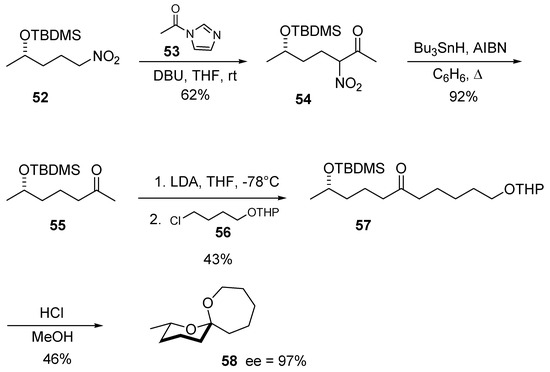 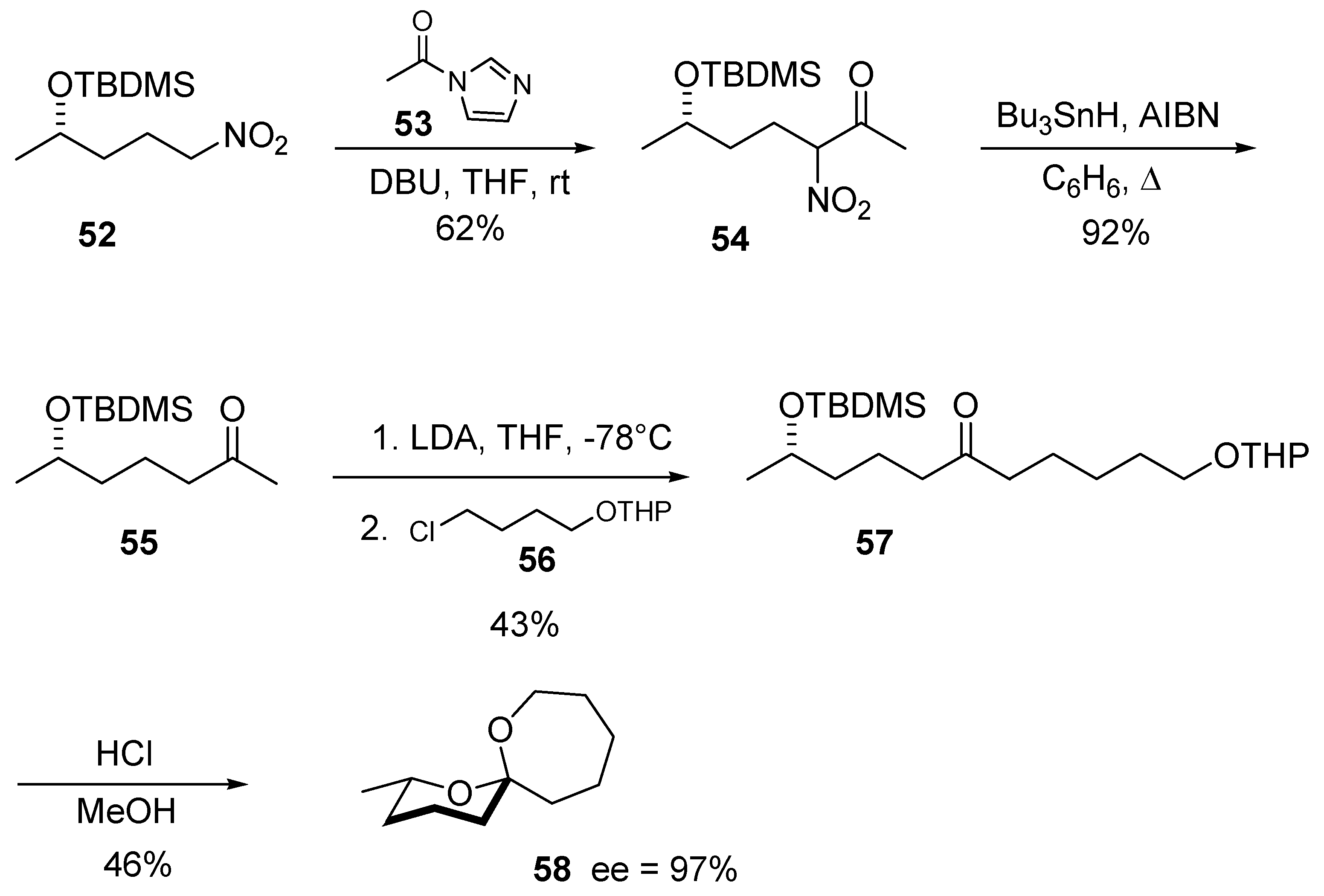 Nitroalkanes bearing oxygenated functional groups are suitable reagents for the assembling of the carbon skeleton of spiroketal systems. New carbon-carbon bonds can be generated exploiting the nucleophilic character of nitronate anions, easily generated from nitroalkanes using mild bases. Nitroaldol as well as conjugate addition reactions can be carried out on nitroalkanes using aldehydes and electron-poor olefins as reagents. Once the appropriate hydroxy groups are inserted in the right place of the structural framework, the nitro to carbonyl conversion ensures a rapid spiroketalization of the resulting dihydroxy ketone. The obtained spiroketals are compounds of relevant practical interest as pheromones, antibiotics and enzyme inhibitors.

Financial assistance by MIUR, Univeristy of Camerino and University of Bologna is gratefully acknowledged.

© 2008 by MDPI (http://www.mdpi.org). Reproduction is permitted for noncommercial purposes.