The development of oil and gas resources is gradually transferring to the deep sea, and the hydrate plugging of submarine pipelines at high pressures and low temperatures is becoming an important problem to ensure the safety of pipeline operations. The swirl flow is a new method to expand the boundary of hydrate safe flow. Numerical simulation of the hydrate slurry flow characteristics in a horizontal pipeline by twisted band has been carried out, and the flow of CO2 hydrate slurry in low concentration has been simulated by the RSM and DPM models. The results show that the heat transfer efficiency is also related to Re and particle concentration. The velocity distribution has the form of symmetrical double peaks, and the peaks finally merge at the center of the pipeline. Vortexes firstly appear on both sides of the edge of the twisted band, and then move to the middle part of the twisted band. Finally, the vortex center almost coincides with the velocity center. The rotation direction of hydrate particles is the same as the twisted direction of the twisted band, twist rate (Y) is smaller, Re is larger, and the symmetric vortex lines merge farther away. The initial swirl number is mainly related to Y, but not Re. The swirl flow attenuates exponentially, and its attenuation rate is mainly related to Re, but not Y. Compared with ordinary pipelines, the swirl flow can obviously improve the transportation distance of hydrate slurry. View Full-Text
Keywords: hydrate; swirl flow; flow characteristics; numerical simulation hydrate; swirl flow; flow characteristics; numerical simulation
►▼ Show Figures 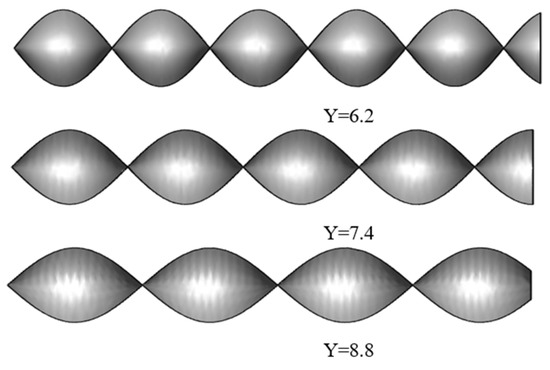