It is well known that two different underlying dynamics lead to different patterns of income/wealth distribution such as the Boltzmann–Gibbs form for the lower end and the Pareto-like power-law form for the higher-end. The Boltzmann–Gibbs distribution is naturally derived from maximizing the entropy of random interactions among agents, whereas the Pareto distribution requires a rational approach of economics dependent on the wealth level. More interestingly, the Pareto regime is very dynamic, whereas the Boltzmann–Gibbs regime is stable over time. Also, there are some cases in which the distributions of income/wealth are bimodal or polymodal. In order to incorporate the dynamic aspects of the Pareto regime and the polymodal forms of income/wealth distribution into one stochastic model, we present a modified agent-based model based on classical kinetic wealth exchange models. First, we adopt a simple two-class society consisting of the rich and the poor where the agents in the same class engage in random exchanges while the agents in the different classes perform a wealth-dependent winner-takes-all trading. This modification leads the system to an extreme polarized society with preserving the Pareto exponent. Second, we incorporate a solidarity formation among agents belonging to the lower class in our model, in order to confront a super-rich agent. This modification leads the system to a drastic bimodal distribution of wealth with a varying Pareto exponent over varying the solidarity parameter, that is, the Pareto-regime becomes narrower and the Pareto exponent gets larger as the solidarity parameter increases. We argue that the solidarity formation is the key ingredient in the varying Pareto exponent and the polymodal distribution. Lastly, we take two approaches to evaluate the level of inequality of wealth such as Gini coefficients and the entropy measure. According to the numerical results, the increasing solidarity parameter leads to a decreasing Gini coefficient not linearly but nonlinearly, whereas the entropy measure is robust over varying solidarity parameters, implying that there is a trade-off between the intermediate party and the high end. View Full-Text
Keywords: kinetic wealth exchange model; stratified society; solidarity; Pareto exponent; Gini coefficient; entropy kinetic wealth exchange model; stratified society; solidarity; Pareto exponent; Gini coefficient; entropy
►▼ Show Figures 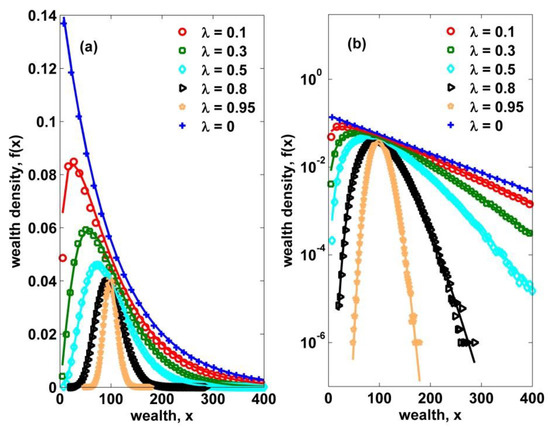