Human key-point detection is a challenging research field in computer vision. Convolutional neural models limit the number of parameters and mine the local structure, and have made great progress in significant target detection and key-point detection. However, the features extracted by shallow layers mainly contain a lack of semantic information, while the features extracted by deep layers contain rich semantic information but a lack of spatial information that results in information imbalance and feature extraction imbalance. With the complexity of the network structure and the increasing amount of computation, the balance between the time of communication and the time of calculation highlights the importance. Based on the improvement of hardware equipment, network operation time is greatly improved by optimizing the network structure and data operation methods. However, as the network structure becomes deeper and deeper, the communication consumption between networks also increases, and network computing capacity is optimized. In addition, communication overhead is also the focus of recent attention. We propose a novel network structure PGNet, which contains three parts: pipeline guidance strategy (PGS); Cross-Distance-IoU Loss (CIoU); and Cascaded Fusion Feature Model (CFFM).
Keywords: object detection; key-point detection; IoU; feature fusion object detection; key-point detection; IoU; feature fusion

In this section, we mainly introduce some studies related to this article, including the recent key-point detection method, the characteristics of the pipeline structure and the working principle and the loss function of border regress-IoU.

As the layers of the network become deeper and deeper, the joint parallel computing of multiple GPUs provides the possibility of speeding up the network. Multi-GPU is divided into multiple stages of the network, and the convolution operations and rectangular transformations of the network are performed in parallel, and communication between various operations is performed. The guidance mechanism is to use its own characteristics to supervise and complete the further optimization of its own information feature extraction. For example, shallow rich-edge information is used to guide the deep layer to better extract deep semantic information, feedback the deep semantic information to supervise the extraction of shallow edge information, and ultimately complete the performance optimization of the network structure, so that the receptive fields of different layers can play to their own advantages [31,32,33,34].

In deep convolutional neural networks, the mainstream method in the process of feature extraction is the frame regression method. An important index for measuring this method is the loss function. The function of the loss function is to predict the distance between the target frame and the prediction frame. Current popular networks such as YOLOv3, SSD, and Faster R-CNN use GIoU, CIoU, or some improved loss functions combined with them [22,23]. Figure 2 shows that the number of positive bounding boxes after the NMS, grouped by their IoU with the matched ground truth.
IoU is an important indicator for neural networks to measure between ground truths and predicted images. In object detection of a bounding box, the object being detected is the minimum value of the rectangular border through multiple iterations. , respectively ground truth and predicted images.
Table 2 shows IoU operation logic, realized target point detection, and key fixed positioning through the same iterative operation multiple times. Despite the detection network frameworks being different, the regression calculation logic for predicting the borders to locate the borders in the target object is the same. Shengkai et al. [36] propose IoU-balanced loss functions that consist of IoU-balanced classification loss and IoU-balanced localization loss to solve poor localization accuracy, and this is harmful for accurate localization. [37] proposed visible IoU to explicitly incorporate the visible ratio in selecting samples, which included a box regressor to separately predict the moving direction of training samples. [23] Yan et al. proposed a novel IoU-Adaptive Deformable R-CNN framework for multi-class object detection, i.e., IoU-guided detection framework to reduce the loss of small-object information during training. Zheng et al. [38] proposed a Distance-IoU (DIoU) loss by incorporating the normalized distance between the predicted box and the target box, which converges much faster in training than IoU and GIoU losses.

Based on the above, our model solves the accuracy and efficiency of key points in positioning, and optimizes the communication consumption due to many iterative operations and convolution operations. In the process of extracting features, the feature fusion mechanism is used to combine high-latitude semantic information with low-latitude spatial information, which makes for great efficiency in the process of locating key points of the human body. Figure 1 shown our proposed framework, which consists of three parts, in three branches—ResNet-51 is selected as the backbone network for picture feature extraction; there is adaptive strategy using pipeline guidance; and a cascaded feature fusion model. The framework of the network is shown in Figure 3.

The main task of the Cascaded Fusion Feature Model (CFFM) is to extract the multi-layer features of the input picture and generate regions where key points are located. The traditional method is to directly use the multi-layer features to generate the prediction anchor frame and compare the ground truth picture to generate the key-point coordinates.
We propose the cascade fusion feature model to extract high-level features and low-level features; the high layers are rich in semantic correlation information and lack low-level spatial information. In contrast, the low layers are rich in edge and spatial features and lack semantic information. In particular, we build CFFM on ResNet-50, which will extract its features using conv1–5 layers. Considering the shallow layers simultaneously use a lot of computing resources, there is no significant improvement in performance, lack of edge, and spatial information during deep feature processes. We use the middle three layers to avoid the consumption of a large amount of spatial information during convolution calculations.

The process of locating key points of the human body is mainly done by analyzing human characteristics, locate key parts, and prepare for downstream video surveillance. We proposed combined traditional data parallelism with model parallelism enhanced with pipelining [39]. Through the structure of the pipelining, separate processing is performed on feature extraction and feature guidance, which effectively saves the resource consumption of the network structure in the communication process.
Pipeline-parallel training partitions the layers of the object being trained into multiple stages. Each layer contains a continuous set of structures in the model, as shown in Figure 3. The pipeline-type structure is used to guide the feature extraction at each stage. After the feature extraction, a convolution operation is used to fuse the features of the two branches on the pipeline and after the feature extraction to complete the key points. Figure 2 shows a network structure based on pipeline guidance, and Figure 3 is a diagram of key points of the human body using the PGNet network. [39]. Figure 4 shows that an example pipeline-parallel assignment with four machines and an example timeline at one of machines.
Because IoU loss can only be effective when the bounding box is reattached during the training process, there are steps where gradient optimization cannot be performed without any coincidence [36]. To overcome the disadvantage that the border boxes must have coincidence to take advantage of IoU losses, GIoU was proposed. Both these losses can make key-point detectors more powerful for accurate localization. According to Equation (1), IoU loss can be defined such that
According to Equation (2), it can be known that the calculation of must be performed in an iterative manner only if there is intersection between the predicted target and the ground truth. GIoU was proposed to improve the gradient descent prediction operation of two bounding boxes without intersection. GIoU defines a distance, between which two bounding boxes can exist without crossing. GIoU is defined as such that where C is the smallest box covering B and Bgt. Due to the introduction of the penalty term, the predicted box will move towards the target box in non-overlapping cases [40]. From Equation (3), we get Loss such that
loss aims to reduce the distance between the center point of the predicted box and the real box.
The cross-distance loss functions we propose inherit some of their inherent properties and are defined as
Where, in Equation (5), , denote the central points of B and Bgt, is the Euclidean distance, and D is the distance of the B and Bg. Figure 5 shows that Distribution of bounding boxes for iterative training.

Our method of evaluating our designed network is on the COCO-2017 database, which is a large image dataset designed for object detection, segmentation, human key-point detection, thing segmentation, and subtitle generation.
In addition, the average precision (AP) metric is used to measure and evaluate the performance of PGNet. To illustrate the performance between the key-point location of the detection object and the key-point of the ground truth object, the results show that the method performs well.

The ablation experiment uses different backbone networks to regularize the method separately and unreasonably, and experiments on the network structure of this problem are based on six indicators. The benchmark database of the experiment is COCO val-2017. The experimental results shown below are obtained. The experimental results show that the network structure proposed in this paper is superior to other network structures in performance, as shown in Table 3.
Another part of the ablation experiment is to compare the results of the Eproch training using a pipelined structure. On object detection and image classification with small mini-batch sizes, CBN is found to outperform the original batch normalization and a direct calculation of statistics over previous iterations without the proposed compensation technique [41] in COCO val-2017. Figure 6 shows the training and test results.

In this paper, we propose an up-to-date type of human body key-point positioning network structure Piple-Guidance NeT. Considering that different layers contain incomprehensible features, the use of pipelined guidance in the structure allows the network to achieve a balance between the convolution calculations and the communication time between the layers, which improves the training speed of the network. In addition, the Cross-Distance-IoU mode is used in the training process, and the results are pleasing in different network backbones. Finally, regarding the COCO2017 dataset, the effectiveness of the algorithm is measured by the six parameters of the AP, and the effects demonstrate that the algorithm performs well. Compared with the current most advanced algorithms, the method improves the accuracy by 0.2%. 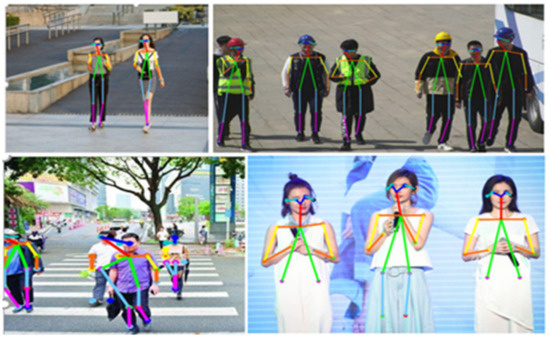 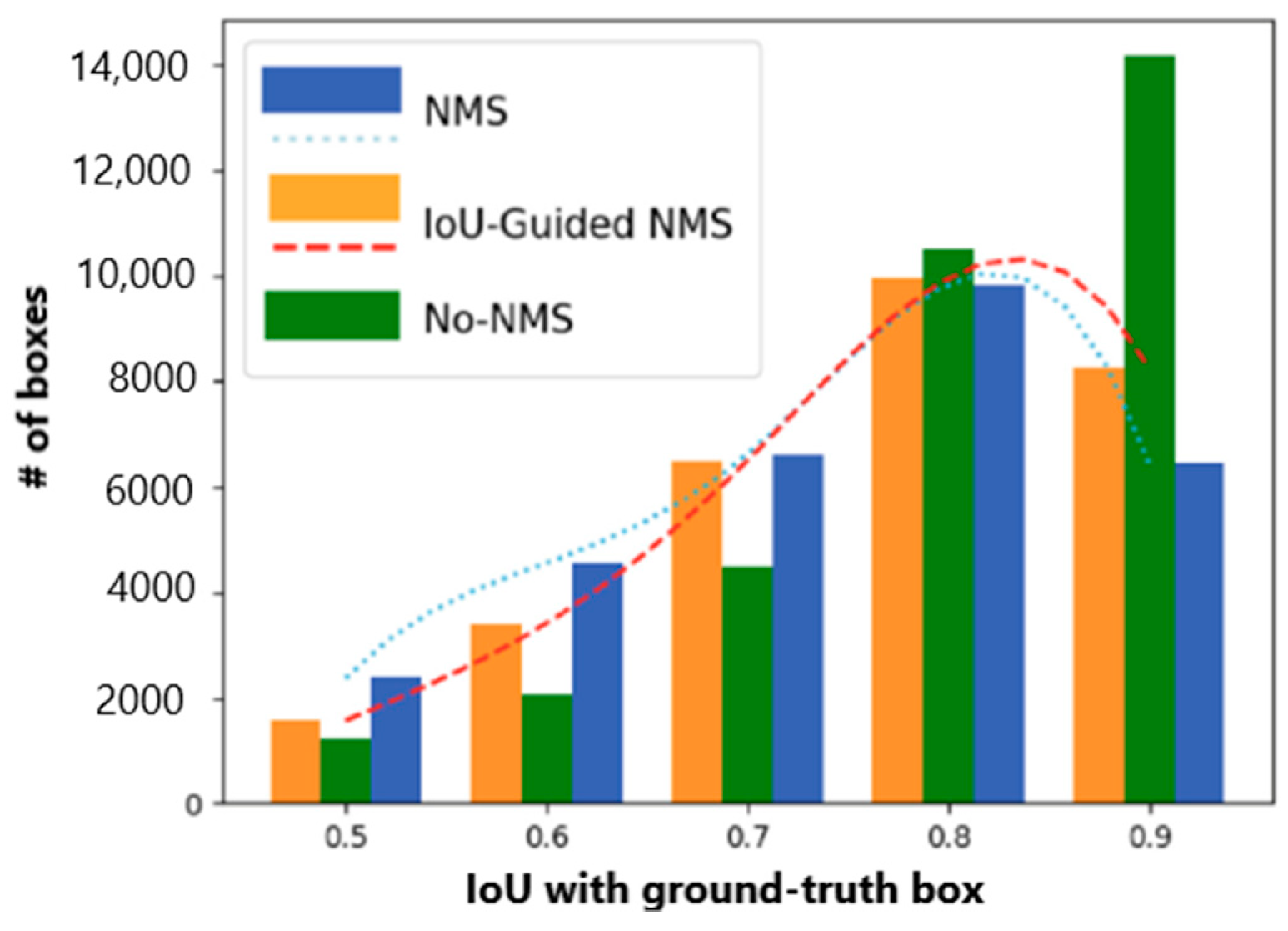 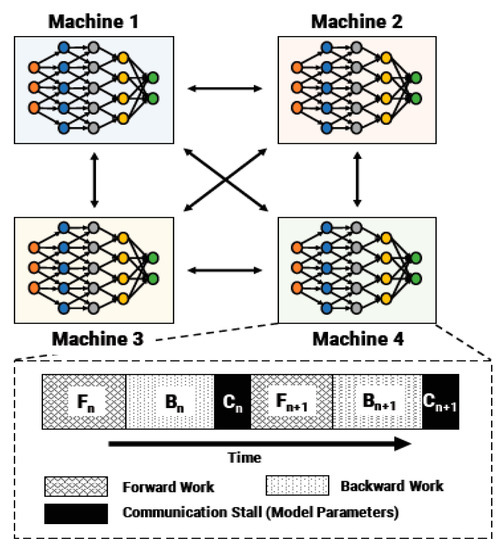 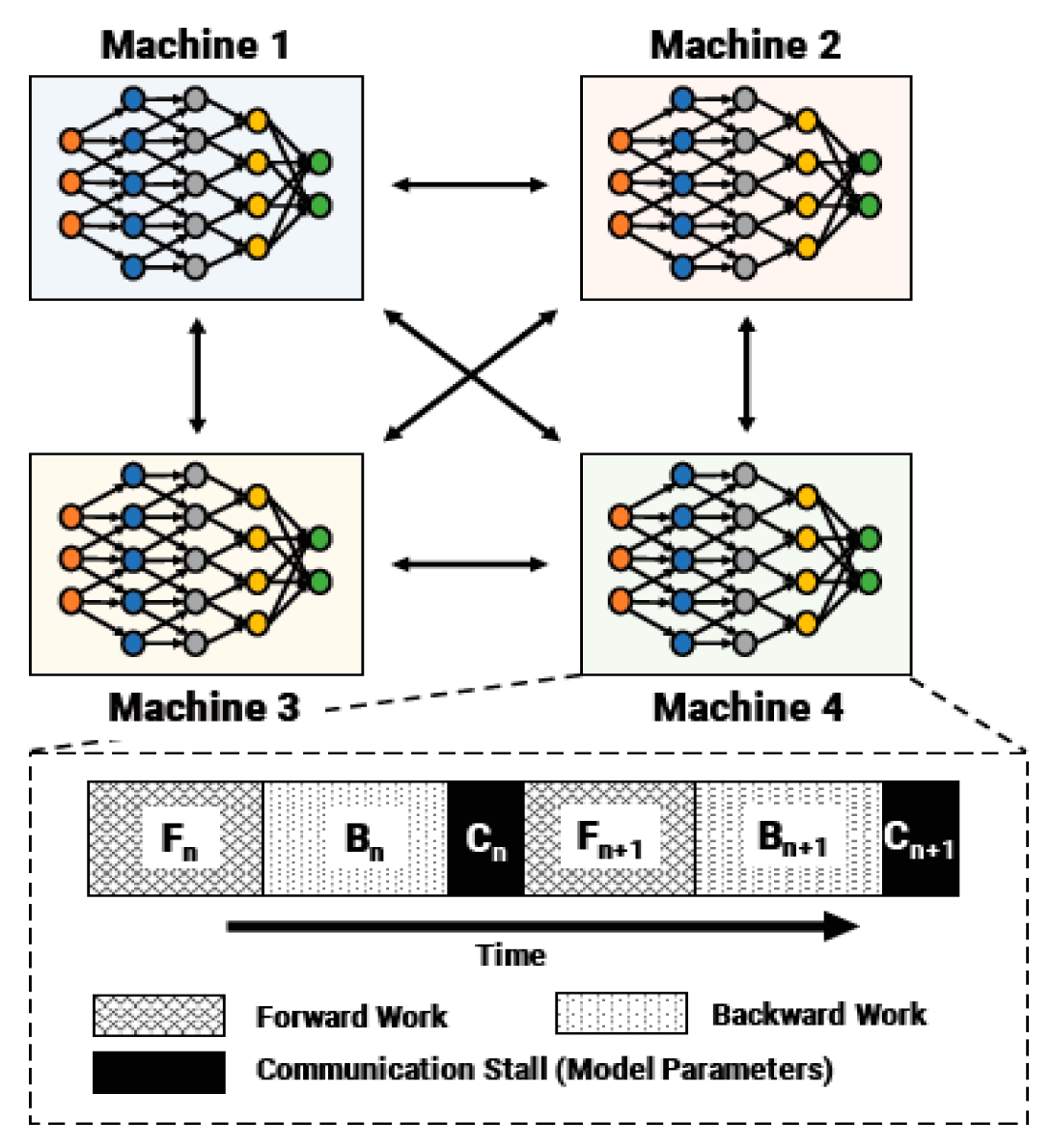