A First Step to the Categorical Logic of Quantum Programs

The Triangle Wave Versus the Cosine: How Classical Systems Can Optimally Approximate EPR-B Correlations

The famous singlet correlations of a composite quantum system consisting of two two-level components in the singlet state exhibit notable features of two kinds. One kind are striking certainty relations: perfect anti-correlation, and perfect correlation, under certain joint settings. The other kind are a number of symmetries, namely invariance under a common rotation of the settings, invariance under exchange of components, and invariance under exchange of both measurement outcomes. One might like to restrict attention to rotations in the plane since those are the ones most commonly investigated experimentally. One can then also further distinguish between the case of discrete rotations (e.g., only settings which are a whole number of degrees are allowed) and continuous rotations. We study the class of classical correlation functions, i.e., generated by classical physical systems, satisfying all these symmetries, in the continuous, planar, case. We call such correlation functions classical EPR-B correlations. It turns out that if the certainty relations and rotational symmetry holds at the level of the correlations, then rotational symmetry can be imposed “for free” on the underlying classical physical model by adding an extra randomisation level. The other binary symmetries are obtained “for free”. This leads to a simple heuristic description of all possible classical EPR-B correlations in terms of a “spinning bi-coloured disk” model. We deliberately use the word “heuristic” because technical mathematical problems remain wide open concerning the transition from finite or discrete to continuous. The main purpose of this paper is to bring this situation to the attention of the mathematical community. We do show that the widespread idea that “quantum correlations are more extreme than classical physics would allow” is at best highly inaccurate, through giving a concrete example of a classical correlation which satisfies all the symmetries and all the certainty relations and which exceeds the quantum correlations over a whole range of settings. It is found by a search procedure in which we randomly generate classical physical models and, for each generated model, evaluate its properties in a further Monte-Carlo simulation of the model itself. View Full-Text
Keywords: singlet correlations; twisted Malus law; EPR-B experiments; local hidden variables; spinning coloured disk model; spinning coloured ball model; simulation models; Bell’s theorem singlet correlations; twisted Malus law; EPR-B experiments; local hidden variables; spinning coloured disk model; spinning coloured ball model; simulation models; Bell’s theorem
►▼ Show Figures 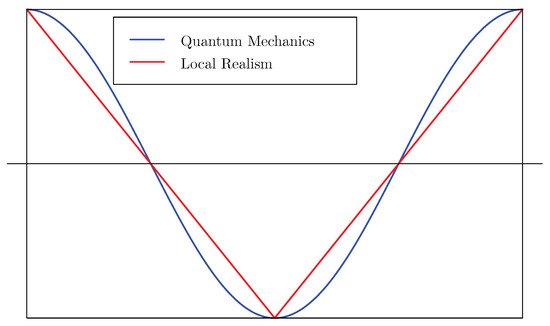 
Gill, Richard D. 2020. "The Triangle Wave Versus the Cosine: How Classical Systems Can Optimally Approximate EPR-B Correlations." Entropy 22, no. 3: 287.