The interest in memristors has risen due to their possible application both as memory units and as computational devices in combination with CMOS. This is in part due to their nonlinear dynamics, and a strong dependence on the circuit topology. We provide evidence that also purely memristive circuits can be employed for computational purposes. In the present paper we show that a polynomial Lyapunov function in the memory parameters exists for the case of DC controlled memristors. Such a Lyapunov function can be asymptotically approximated with binary variables, and mapped to quadratic combinatorial optimization problems. This also shows a direct parallel between memristive circuits and the Hopfield-Little model. In the case of Erdos-Renyi random circuits, we show numerically that the distribution of the matrix elements of the projectors can be roughly approximated with a Gaussian distribution, and that it scales with the inverse square root of the number of elements. This provides an approximated but direct connection with the physics of disordered system and, in particular, of mean field spin glasses. Using this and the fact that the interaction is controlled by a projector operator on the loop space of the circuit. We estimate the number of stationary points of the approximate Lyapunov function and provide a scaling formula as an upper bound in terms of the circuit topology only. View Full-Text
Keywords: memristive circuits; spin models; disordered systems memristive circuits; spin models; disordered systems
►▼ Show Figures 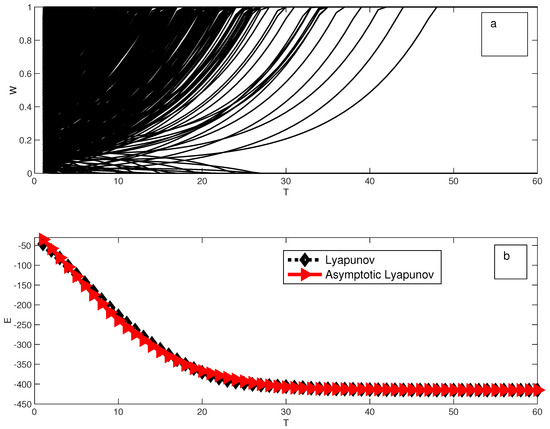