Chaotic maps are highly sensitive to the initial value, which makes them unpredictable. A change in the numerical sequence that is generated by the function can occur, even if a minor change in the initial value is executed [51]. Different forms of chaotic maps are used; however, the logistic map is perhaps the most known map and is defined in Equation (1) [13], as follows: here Tn is the state, r is the behavior parameter, and n is the count of iterations used to generate the state values iteratively.
This 1D logistic map can be extended to a three-dimensional (3D) one, as indicated in Equation (2) [52].
If the values of the parameters fall within the ranges , here are in [0, 1], and then the chaotic behavior is observed.

The skew tent map is represented by the nonlinear equation [52]: here is the state, is the behaviour parameter, and n is the count of permutations that are used to create state values iteratively.

First, the RGB image, which has the dimension of is segregated into four quadrants. Subsequently, each quadrant is further segregated into four sub-quadrants, while each sub-quadrant is rotated anti-clockwise by 90° to form 64 sub-blocks. While this procedure scrambles the image, it does not fully remove the associations between the nearby pixels.

The proposed Enhanced Logistic Map (ELM) enhances the security of the scheme by employing the chaotic diffusion method. The ELM is 3D, as it separately deals with RGB of the color image. The ELM is defined, as follows: where, are the constants, . The range of all are greater than the 3D logistic map, thus it provides better security than the 3D logistic map.
The bifurcation diagram and the Lyapunov Exponent of ELM are shown in Figure 1 and Figure 2, respectively.

Both encryption and decryption processes use the same key. have their values in [0, 1]. Accordingly, the values are transformed to the range 0–255. The equation for generating the values of X, Y, Z are presented below:
For example, the initial values for are defined as , , and , respectively, and the values of constants are , ,, and .
The cryptosystem is secured with the plain image, the novel proposed system employs a 256-bit key (K), which has 192-bit data calculated from ELM, the secret key (), and 64-bit data chosen by the user from a plain image (). retains pixels , which are selected by the encoder. Now, , where the key K is segregated into 16-bit parts .
The initial condition , the parameter and the iteration count of the skew tent system are defined by the following equations:
As a result, the generated key depends on the image and EX-OR operation is executed with each value of

The proposed framework can be used for any color image. Encryption has two parts: confusion and diffusion. Blocks scrambling is used to obtain 64 squares when confusion is performed. Finally, the modified ZT is performed to remove the association between the adjacent pixels. Key generation executed while using the 3D ELM to produce secret keys in the range 0–255 for every X, Y, and Z. In the final step, the EX-OR operation is executed to obtain the cipher image.
Algorithm 1 summarizes the algorithm of encryption.
Figure 3 presents the block diagram for the encryption procedure. The decryption process is performed in reverse of encryption to obtain plain image .

The proposed method is heavily dependent on the key, it should ensure that the key is secure, and that the key space should be adequately large to make the brute force attack impossible. As the proposed algorithm uses a 256-bit key, the number of admissible secret key combinations is 2256 for R, G, and B separately, making it quite difficult to break while using brute force.

The good encryption method must be very sensitive to changes in the keys. Implementing a small change to the encryption key, the output image must be very different when compared to the unmodified encrypted image.

Usually, the neighboring pixels of the plain image are related, while the adjacent pixels of the encrypted image are weakly correlated, which suggests that there are no associations between them.
Correlation Coefficient Analysis (CCA) is performed to assess the level of similarity between the pair of pixels. This involves the calculation and assessment of the Pearson correlation coefficient alongside the vertical, horizontal, and diagonal directions of both the plain and encrypted image.
A good encryption method should break the correlation between adjacent pixels. The less the correlation is, the more effectively the method performs. The correlation coefficient is calculated, as follows: here X and Y are the pixels and neighboring pixels of the original and encrypted image, is the covariance between and , is variance of , and is the expected value of .

Information entropy assesses uncertainty of a random variable, as follows [56]: here is the probability of the presence of pixel .
A larger entropy value indicates a greater level of security when applied to evaluate image encryption. Usually, an entropy value that is very close to a perfect value of 8 is considered to be safe from a brute force attack.

All of the simulations were performed on a desktop computer with Intel ® Core™ i5-2430M CPU 2.4GHZ Processor, 4GB RAM, and Windows 8 Professional operating system. We used the freely available images from the USC-SIPI image dataset, such as Baboon, Plane, Lena, and Peppers, as the original protected images (see Figure 4). Figure 5 shows the encrypted images.

Standard techniques and tests are recommended for evaluating the results [51,52,53]. The quality of the proposed encoding method is indicated by the uniform distribution of pixel values in an encrypted image while using the histogram analysis method. As an example, see a histogram of the Peppers image for red (R), green (G), and blue (B) channels in Figure 6a–c. Figure 6d–f presents the RGB channels of the encrypted Peppers image. Here, the uniform distribution indicates that it would be difficult for the attacker to decipher the data.
It will not be possible to reconstruct the enciphered image if the keys differ by a small value [23]. As an example, Figure 7 shows the reconstructed images with a minor change of the secret key from to , leading to totally different images.
The scattered graph can show the correlations between the neighboring image pixels. 1000 random neighboring pixels from an image are used to show the relationship. As an example, Figure 8a–c demonstrates a strong correlation between adjoining pixels, along horizontal, vertical, and diagonal neighboring pixels in the Peppers plain image. However, the correlation between the neighboring pixels is weak for an encrypted Pepper image (see Figure 8d–f).
The correlation values for plain and encrypted images are given in Table 1 for the Lena, Peppers, Barbara, and Baboon images, along the horizontal, vertical and diagonal directions.
Table 2 presents the results of NPCR and UACI, PSNR, and Entropy. The values of NPCR and UACI demonstrate that the algorithm is very resistive against differential attack. The entropy is quite close to a perfect value of 8, and demonstrates that the proposed encryption method randomized the pixels in the encrypted image well. The obtained PSNR values are low, hence they also show that the proposed algorithm is good.
The proposed method is compared with other methods, while using entropy, NPCR, UACI, and correlation analysis for the Lena image of size 256 × 256 in Table 3. Here, we compare our method with other methods that were proposed by Li et al. [50] by Zhang et al. [27], Xu et al. [58], Wang et al. [59], Liu and Wang [60], Hussain et al. [61], Wang and Zhang [62], and Ahmad et al. [56].
In an occlusion attack, the enciphered image, which is transmitted over communication channels, could lose blocks of information. The robustness of the proposed algorithm against 12.5%, 25%, and 50% of occlusion in an encrypted image is evaluated while using MSE. The resulting MSE values are 1542.8362 for 12.5%, 3214.7971 for 25%, and 6927.9417 for 50% occlusion. We can claim that the proposed method can resist an occlusion attack, as the deciphered image still can be retrieved.
Following the suggestion of Askar et al. [63], the original images are corrupted by adding Gaussian noise with the mean of 0 and variance of 0.001, as well as with salt and pepper noise with the density of 0.05. Figure 9 shows the obtained deciphered images. To compare, Table 4 shows the MSE and PSNR values. Based on Table 4, it can be concluded that the proposed method is resistant to salt and pepper noise, since the PSNR value exceeded 58 dB.
The Tang’s algorithm [64], Zhang’s algorithm [65], and Karawia’s algorithm [66] were compared for the computational performance analysis. The results are shown in Figure 10 for the same set of four images, and they demonstrate that the proposed algorithm is computationally more efficient.

The NIST statistical test suite (version 2.1.1, National Institute of Standards and Technology, Gaithersburg, MD, USA) [67] was used to evaluate the randomness of the bit sequence that was produced by the proposed system. The suite involves 15 tests, which assess the randomness that might occur in a series. Table 5 presents the results. Table 5 indicates that the NIST test is effectively performed: all p−values among 1000 sequences used for testing are evenly distributed in the 10 subintervals, while the pass rate is also acceptable. The average pass rate is 99.1% with a minimum pass rate of 98.4%.

We introduced an image encryption method that is based on a chaotic map with a new symmetric key generation system. The scheme uses Block Scrambling and Modified Zigzag Transformation, while key generation is performed using the enhanced logistic-tent map. Confusion and diffusion are achieved by pixel shuffling. It provides priority to resisting the brute-force attack to the suggested algorithm. The experimental results revealed that the suggested method has generated the encrypted images with uniform distribution in pixel histograms. Moreover, the suggested algorithm has shown that the encrypted pictures have information entropy of close to 8. It is able to robustly resist chosen/known plaintext attacks, is robust to salt and pepper noise, and it can withstand up to 50 percent occlusion attack. The comparison experiments were performed with other recent algorithms. The results of the statistical testing indicate that the new pseudo-random bit combiner can provide file encryption/decryption safety. We claim that the method is secure and computationally efficient based on the analysis of the proposed method. The proposed algorithm is simple, fast, and has strong practical application value. 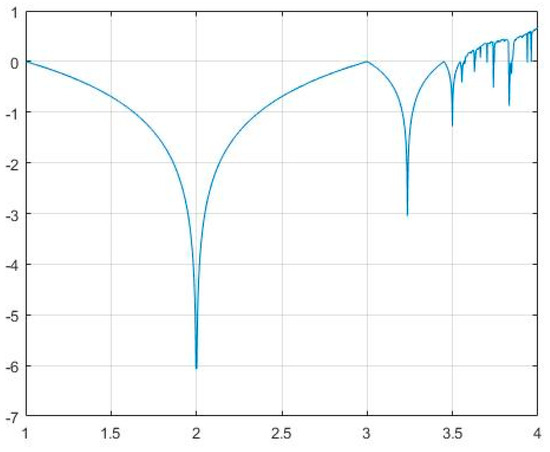 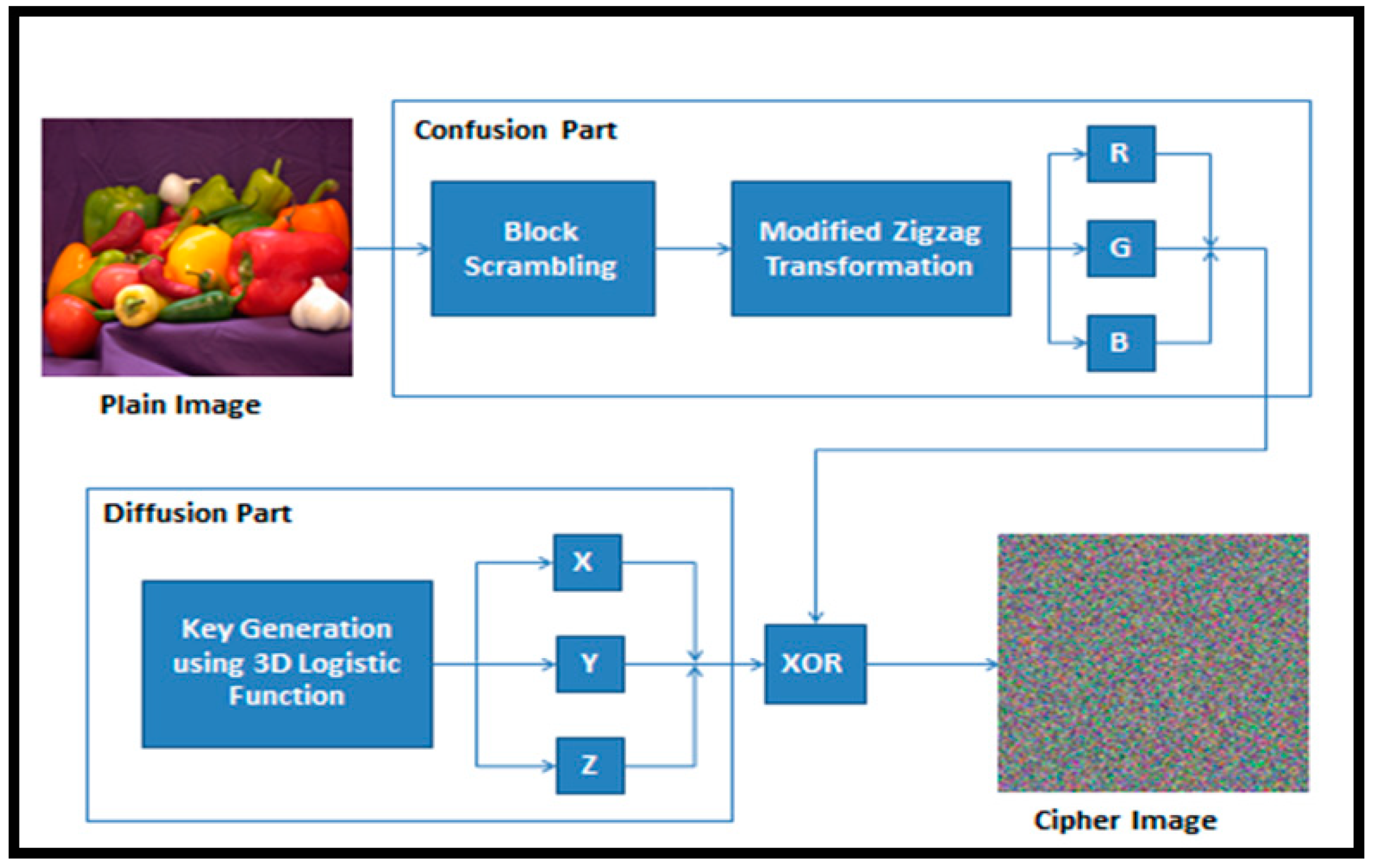 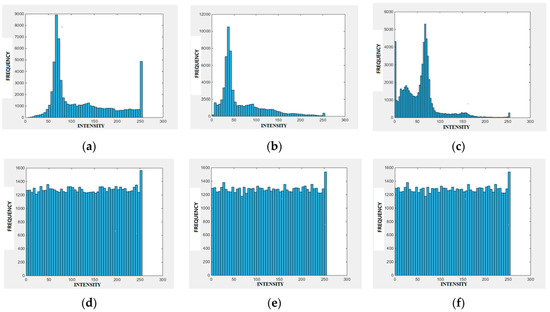 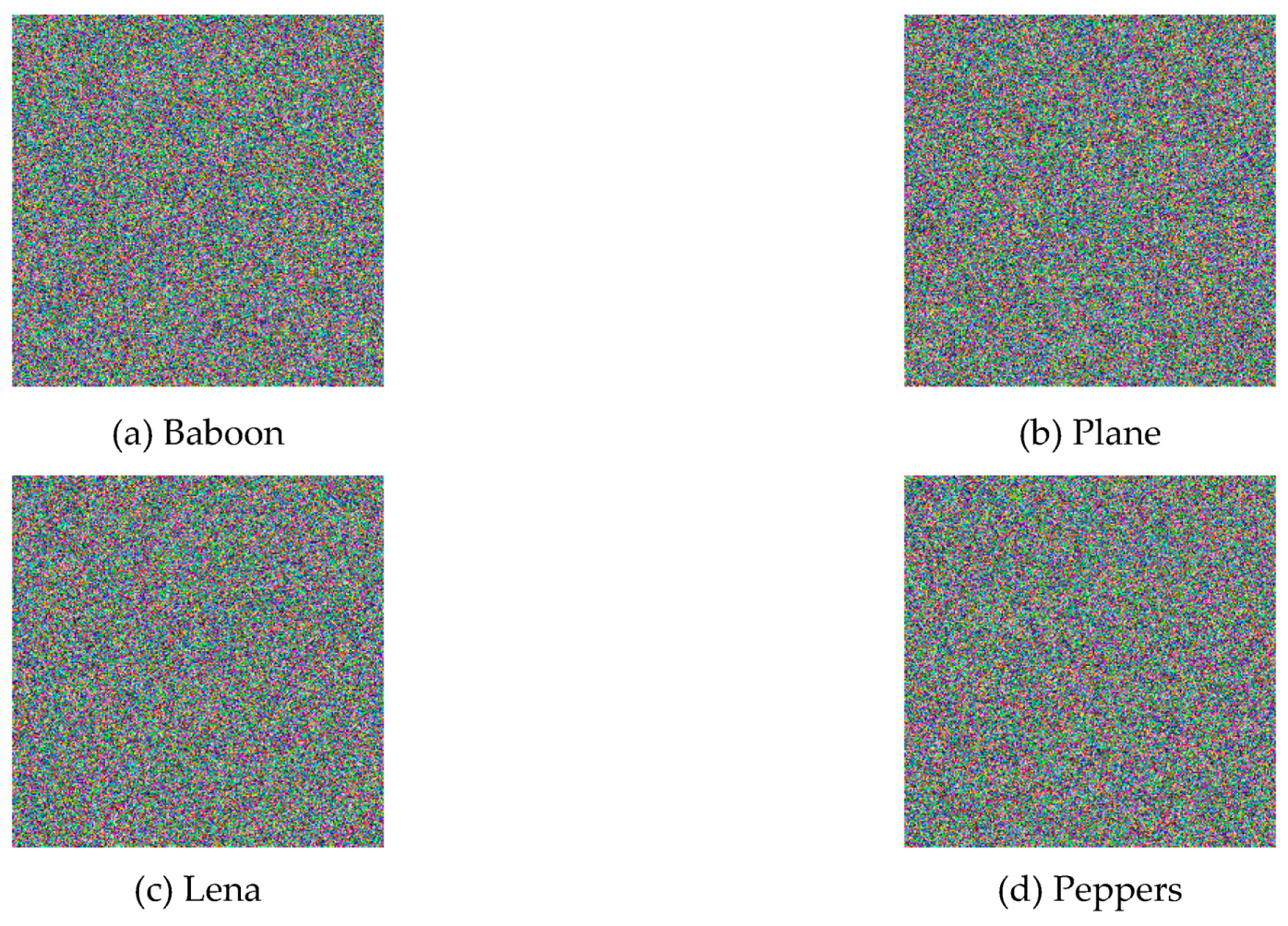 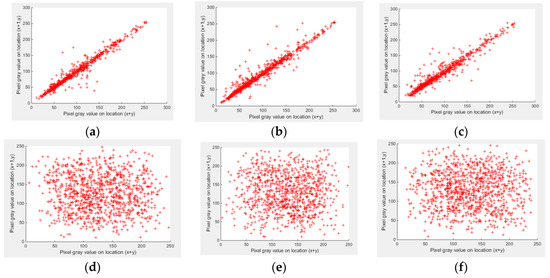 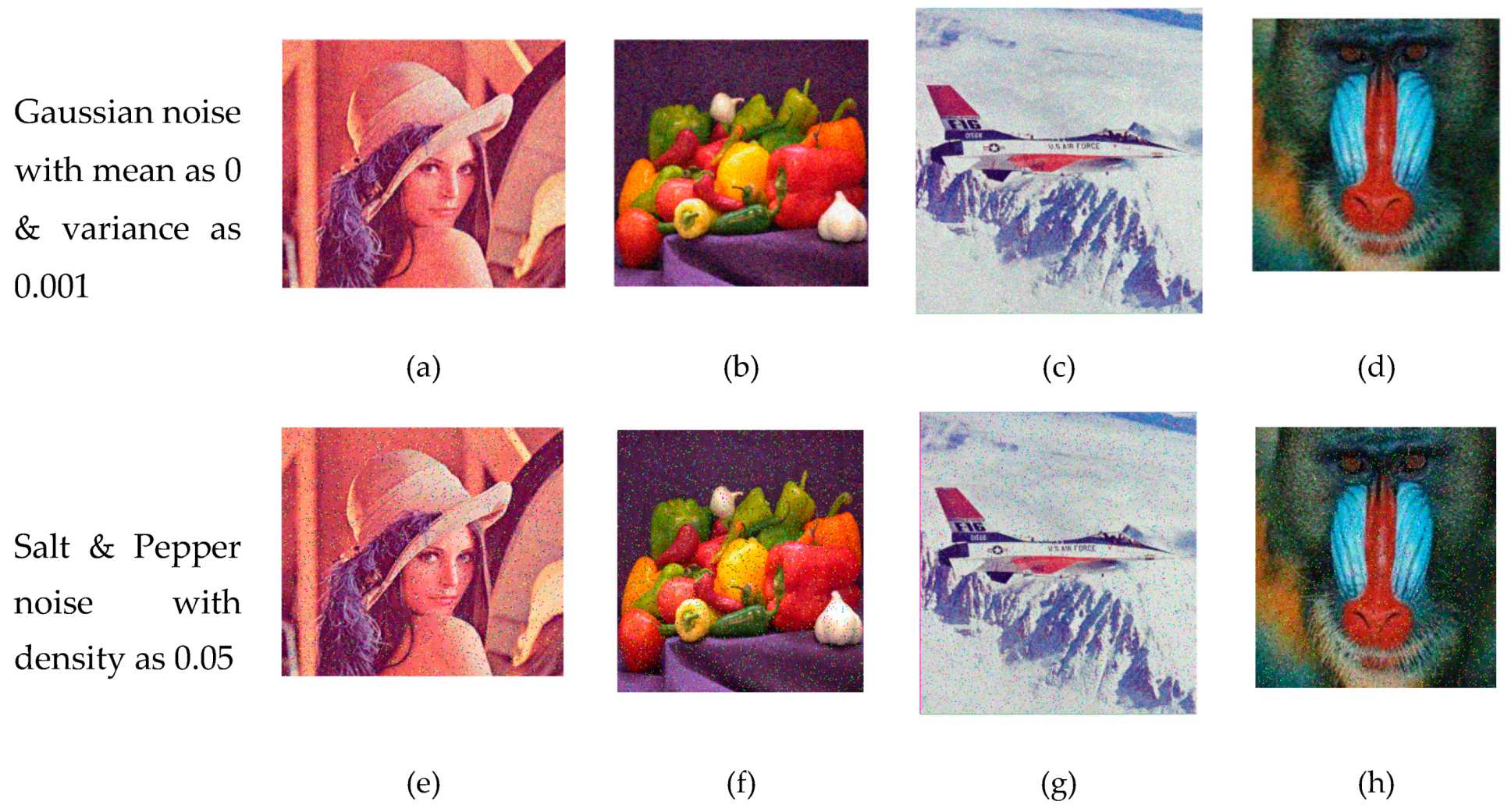