Brain–computer interfaces (BCI) have traditionally worked using synchronous paradigms. In recent years, much effort has been put into reaching asynchronous management, providing users with the ability to decide when a command should be selected. However, to the best of our knowledge, entropy metrics have not yet been explored. The present study has a twofold purpose: (i) to characterize both control and non-control states by examining the regularity of electroencephalography (EEG) signals; and (ii) to assess the efficacy of a scaled version of the sample entropy algorithm to provide asynchronous control for BCI systems. Ten healthy subjects participated in the study, who were asked to spell words through a visual oddball-based paradigm, attending (i.e., control) and ignoring (i.e., non-control) the stimuli. An optimization stage was performed for determining a common combination of hyperparameters for all subjects. Afterwards, these values were used to discern between both states using a linear classifier. Results show that control signals are more complex and irregular than non-control ones, reaching an average accuracy of in classification. In conclusion, the present study demonstrates that the proposed framework is useful in monitoring the attention of a user, and granting the asynchrony of the BCI system. View Full-Text
Keywords: sample entropy; multiscale entropy; brain–computer interfaces; asynchrony; event-related potentials; P300-evoked potentials; oddball paradigm sample entropy; multiscale entropy; brain–computer interfaces; asynchrony; event-related potentials; P300-evoked potentials; oddball paradigm
►▼ Show Figures 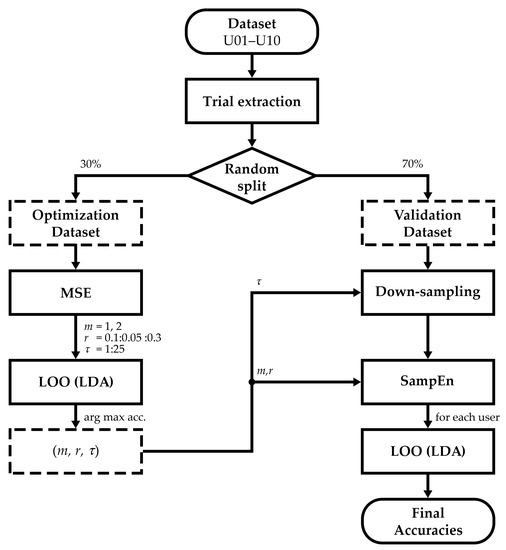