Symmetry, Outer Bounds, and Code Constructions: A Computer-Aided Investigation on the Fundamental Limits of Caching

We illustrate how computer-aided methods can be used to investigate the fundamental limits of the caching systems, which are significantly different from the conventional analytical approach usually seen in the information theory literature. The linear programming (LP) outer bound of the entropy space serves as the starting point of this approach; however, our effort goes significantly beyond using it to prove information inequalities. We first identify and formalize the symmetry structure in the problem, which enables us to show the existence of optimal symmetric solutions. A symmetry-reduced linear program is then used to identify the boundary of the memory-transmission-rate tradeoff for several small cases, for which we obtain a set of tight outer bounds. General hypotheses on the optimal tradeoff region are formed from these computed data, which are then analytically proven. This leads to a complete characterization of the optimal tradeoff for systems with only two users, and certain partial characterization for systems with only two files. Next, we show that by carefully analyzing the joint entropy structure of the outer bounds for certain cases, a novel code construction can be reverse-engineered, which eventually leads to a general class of codes. Finally, we show that outer bounds can be computed through strategically relaxing the LP in different ways, which can be used to explore the problem computationally. This allows us firstly to deduce generic characteristic of the converse proof, and secondly to compute outer bounds for larger problem cases, despite the seemingly impossible computation scale. View Full-Text
Keywords: computer-aided analysis; information theory computer-aided analysis; information theory
►▼ Show Figures 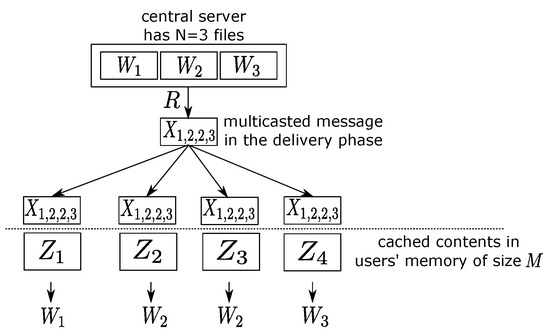