The Philosophical and Scientific Metaphysics of David Bohm

Standard micro-dynamical equations, whether classical or quantum, are deterministic and reversible. They can, nonetheless, encode various options of irreversibility even at the fundamental level. Here, I am going to discuss two separate concepts of fundamental irreversibility, which are quite certain to overlap in the long run. The first option concerns space-time (gravity); it is relativistic, hallmarked by mainstream cosmologists and field theorists (including immortal ones). The second option is rooted in the explicit irreversibility of von Neumann measurement in non-relativistic quantum mechanics; its story is perhaps more diffusive than that of the first. The standard and linear story of Planck scale irreversibility is recapitulated in Section 2. I choose a personal account for the parallel story of the conjectured Newton-gravity-related non-relativistic irreversibility of macroscopic quantum mechanics in Section 3. I stop both stories in the 1980s when the same structure of heuristic master equations was proposed for the two options of fundamental irreversible dynamics—with different interpretations and regimes of significance, of course. Towards their reconciliation, Section 4 offers some thoughts and concludes in an open-ended fashion.

At the dawn of quantum-gravity research, Bronstein [1,2,3] discovered by heuristic calculations that the precise structure of space-time, contrary to the precise structure of electromagnetism, is unattainable if we rely on the quantized motion of test bodies. Subsequent decades raised stronger and famous arguments concerning space-time blurriness, unpredictability, its role in universal loss of information, of quantum coherence, and of microscopic reversibility in general. Wheeler [4] found that smooth space-time changes into a foamy structure of topological fluctuations at the Planck scale. Bekenstein [5] gave the first exact quantitative proposal toward fundamental irreversibility, claiming that black holes have entropy: where is Boltzmann’s constant; is the Planck length. This was confirmed by Hawking [6] who showed that black holes do, indeed, emit the corresponding thermal radiation. A short time later, he summarized the situation by stating the unpredictability of quantum-gravity at the Planck scale, leading him to propose that quantum field theory is fundamentally irreversible [7]. Accordingly, the unitary scattering operator should be replaced by the more general superscattering operator $ acting on the initial density operator instead of the initial state vector:
To resolve the detailed irreversible (non-unitary) dynamics beyond Hawking’s superscattering, Ellis et al. [8] proposed a simple quantum-kinetic (master) equation, which Banks, Susskind and Peskin [9] generalized as follows: where is the Hamiltonian, is a certain quantum field, and is a positive symmetric kernel. The transparent structure allowed the authors to point out a substantial difficulty: non-conservation of energy-momentum.

3. Irreversibility in the Schrödinger–Newton Context

In the early 1970s, being a student fascinated already by quantum theory, I missed a dynamical formalism of the state vector collapse from it. If I were a student and aware of the related literature, I would have read the phenomenological model by Bohm and Bub [10]. However, I was not aware of it, and started to think on my own. If you open a textbook, you will read about the expansion of the time-dependent state vector in terms of the energy eigenstates of eigenvalues , respectively. However, I wrote it with a little modification: because I observed that by allowing a small randomness of the time flow, the average density matrix becomes gradually diagonal in the energy basis: exactly as if someone measured the energy. I made a prototype dynamical model of non-selective von Neumann measurements. A question remained unanswered: where does randomness of time come from? The hint should have come from the sadly forgotten Bronstein [1,2,3], but it came from Károlyházy after he gave department seminars in 1973 on his earlier work [11] where he used a Planck scale uncertainty of classical space-time and a very vague model of massive body’s state vector collapse based upon it. Unfortunately, I had to do experimental particle physics for a decade.
Returning to theory, I showed [12] that the Newtonian limit of standard reversible semi-classical gravity, the so-called Schrödinger–Newton equation [13], obtains sensible solitonic wave functions for the massive (e.g., nano-) objects’ center-of-mass. This determined my approach, i.e., to put non-relativistic flesh on the toy dynamics (4) and (5) of state vector reduction. The uncertainty of time flow should come from the Newtonian limit of the metric tensor element , which is, in fact, the Newton potential . The unpredictability of the Newton potential should depend on G and ℏ, but not on c. The choice was the following spatially correlated white-noise:
The random part of the Newton potential couples to the mass density operator via the interaction , yielding the following master equation for the density operator: This dynamic is mimicking the (non-selective) von Neumann measurement of massive object’s positions. It predicts the spontaneous reduction (decay) of Schrödinger cat states (see the same result in [13] by Penrose).
Before journal publication [14], I showed this result to Yakir Aharonov (read Appendix A). He warned me about the energy-momentum non-conservation. This came as a surprise to me as I had not read [9].

Two independent theories of relativistic and non-relativistic fundamental irreversibility, both related to the conflict between gravity and quantization, are in the scope of this work. One was conceived and would be relevant in cosmology. The other one was born from the quantum measurement problem and would modify the quantum mechanics of massive bodies even in the lab. Their conceptions have been outlined in Section 2 and Section 3, respectively, including their basics without details and later developments. Such a restricted presentation sufficed to expose the issue at the center of this work in Section 4: what is the relationship between the Planckian and the Schrödinger–Newton unpredictability of our space-time? The question remains unanswered, but our purpose has been to highlight it. In particular, we pointed out that Planckian unpredictability survives non-relativistically—for massive macroscopic quantized degrees of freedom.

This research was funded by the Hungarian Scientific Research Fund grant number 124351 and the EU COST Action grant number CA15220.

The Fetzer Franklin Fund is acknowledged for generously covering my costs to attend the Emergent Quantum Mechanics 2017 conference (26–28 October, University of London) and to publish this work in open access. 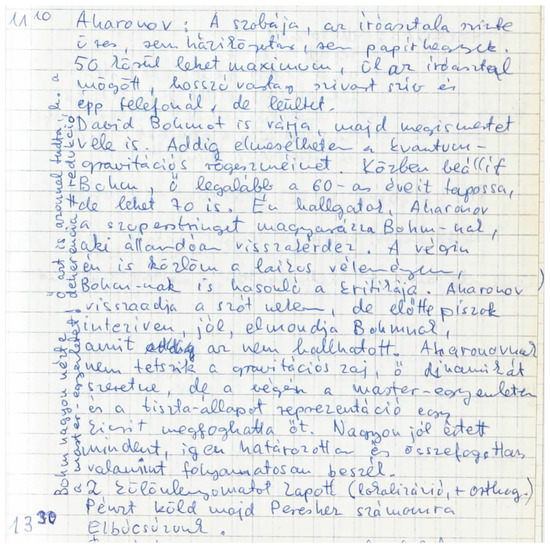 It was Asher Peres who asked Yakir to receive the unknown theorist from Hungary. Below is the translation of my notes (Figure A1).

1110 Aharonov: His office and desk are almost empty, no personal library, no paper piles. He is at most 50 or so. He sits behind the desk, smokes a long fat cigar, makes a phone call, and asks that I take a seat.
We await David Bohm, who I will also be introduced to. Until then, I can unfold my quantum-gravity idée fix. David Bohm arrives. He is at least in his 60s, but could be 70. I am listening as Aharonov explains the superstring to Bohm who is repeatedly asking questions. Finally, I also communicate my layman’s views; Bohm’s criticism is also akin. Aharonov allows me to speak, but first tells Bohm with hellish intensively what he could not have heard. Aharonov dislikes gravitational noise; he prefers dynamics. However, at the end, my master equation and the pure state representation may have caught him a bit. He understood everything very well, he spoke steadily, with real firmness and organization.
He got two offprints (localization + orthog.)
Peres will send money for me.
1330 We say goodbye.
Left margin: Bohm looked at the master equation intently! Immediately, he also knew that decoherence ≠ reduction.