Rate-Distortion Region of a Gray–Wyner Model with Side Information

To understand the intuition behind Definition 1, consider aggregating n numbers by defining a sequence of functions (indexed by n) where is a continuous, increasing function on , , and . It is easy to see that (5) satisfies the following properties:
Moreover, it is shown in [2] that any sequence of functions that satisfies these properties must have the form of Equation (5) for some continuous, increasing . The function is referred to as “Kolmogorov mean”, “quasi-arithmetic mean”, or “generalized -mean”. The most prominent examples are the geometric mean, , and the root-mean-square, .
The main insight behind Definition 1 is to define an n-letter distortion measure to be an -mean of single-letter distortions. The -separable distortion measures include all n-letter distortion measures that satisfy the above properties, with the last property saying that the non-linear “shape” of distortion measure (cf. Figure 1) is independent of n.
Finally, we note that Rényi also arrived at his well-known family of entropies [3] by taking an -mean of the information random variable: where the information at x is
Rényi [3] limited his consideration to functions of the form in order to ensure that entropy is additive for independent random variables.

Source coding with non-linear cost has already been explored in the variable-length lossless compression setting. Let denote the length of the encoding of x by a given variable length code. Campbell [4,5] proposed minimizing a cost function of the form instead of the usual expected length. The main result of [4,5] is that for the fundamental limit of such setup is Rényi entropy of order . For more general , this problem was handled by Kieffer [6], who showed that (9) has a fundamental limit for a large class of functions . That limit is Rényi entropy of order with More recently, a number of works [7,8,9] studied related source coding paradigms, such as guessing and task encoding. These works also focused on the exponential functions given in (10); in [7,8] Rényi entropy is shown to be a fundamental limit yet again.

In light of the discussion in Section 1.1, an alert reader may consider modifying (16) to and studying the -lossy source codes under this new paradigm. Call the corresponding rate-distortion function and assume that n-letter distortion measures are separable. Thus, at block length n the constraint (55) is where . This is equivalent to the following constraints: where is an -separable distortion measure. Putting these observations together with Theorem 1 yields A consequence of Theorem 1 is that the rate distortion function remains unchanged under this new paradigm.

Authors had equal contributions in the paper. All authors have read and approved the final manuscript.

Appendix A. Lemmas for Theorem 1

Theorem A1 can be distilled from several proofs in literature. We state it here, with proof, for completeness; it is given in its present form in [16]. The condition of Theorem A1 applies when the source satisfies assumptions (1)–(3) in Section 3. This is a consequence of the ergodic theorem and continuity of .
Theorem A1.
Suppose that the source and distortion measure are such that for any there exists and a sequence such that
If a rate-distortion pair is achievable under the excess distortion criterion, it is achievable under the average distortion criterion.
Proof.
Choose . Suppose there is a code with M codewords that achieves We construct a new code with codewords: Then For brevity denote, Then, ☐
The following theorem is shown in ([12], Theorem 1).
Theorem A2 (Kieffer).
Let be an information source satisfying conditions (1)–(3) in Section 3, with being the identity. Let be separable. Given an arbitrary sequence of -lossy source codes, ifthen
An important implication of Theorem A2 for -separable rate-distortion functions is given in the following lemma.
Lemma A1.
Let be an information source satisfying conditions (1)–(3) in Section 3. Then,
Proof.
If , we are done. Suppose . Assume there exists a sequence of -lossy source codes (under -separable distortion) with and Since is continuous and decreasing, there exists some such that
For every n, the lossy source code is also an -lossy source code for some and -separable . It is also an -lossy source code with respect to separable distortion . We can therefore apply Theorem A2 to obtain Thus, where (A22) holds for all sufficiently large n. The result follows since we obtained a contradiction with (A18). ☐

Appendix B. Rate-Distortion Function for a Mixed Source 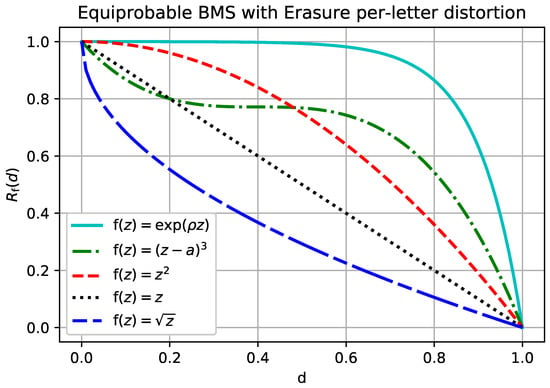 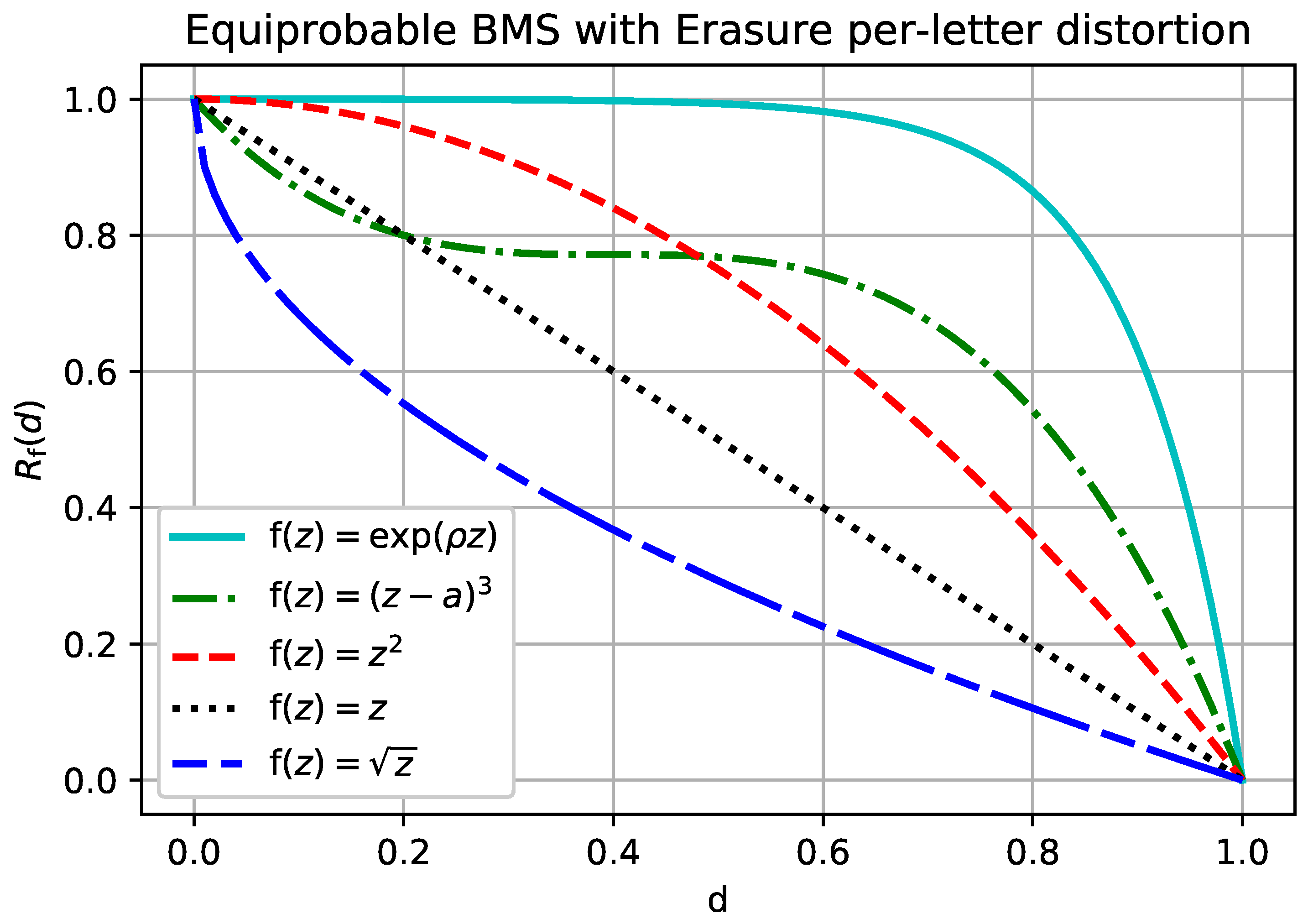 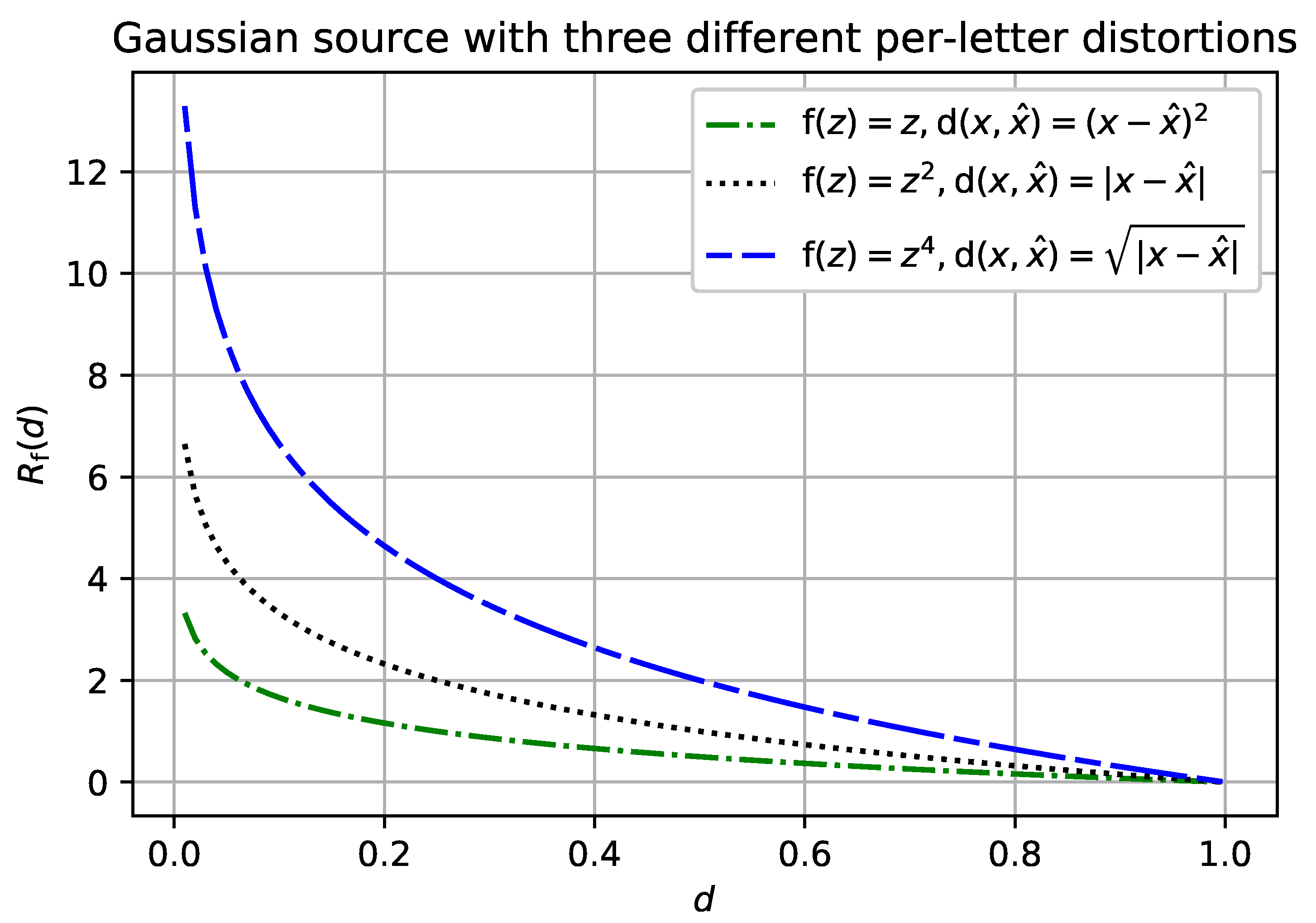 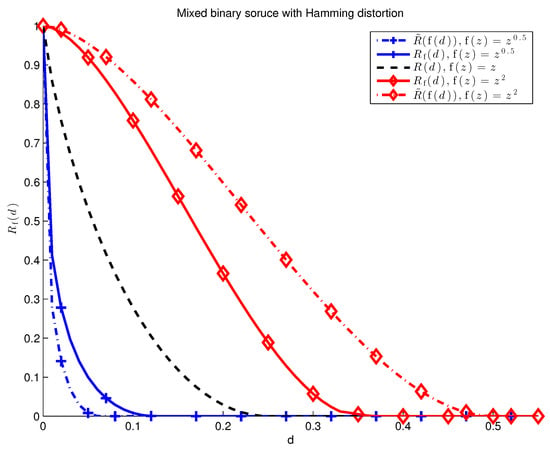