In the spirit of Bose–Einstein condensation, we present a detailed account of the statistical description of the condensation phenomena for a Fermi–Dirac gas following the works of Born and Kothari. For bosons, while the condensed phase below a certain critical temperature, permits macroscopic occupation at the lowest energy single particle state, for fermions, due to Pauli exclusion principle, the condensed phase occurs only in the form of a single occupancy dense modes at the highest energy state. In spite of these rudimentary differences, our recent findings [Ghosh and Ray, 2017] identify the foregoing phenomenon as condensation-like coherence among fermions in an analogous way to Bose–Einstein condensate which is collectively described by a coherent matter wave. To reach the above conclusion, we employ the close relationship between the statistical methods of bosonic and fermionic fields pioneered by Cahill and Glauber. In addition to our previous results, we described in this mini-review that the highest momentum (energy) for individual fermions, prerequisite for the condensation process, can be specified in terms of the natural length and energy scales of the problem. The existence of such condensed phases, which are of obvious significance in the context of elementary particles, have also been scrutinized. View Full-Text
Keywords: fermionic coherent states; reciprocity principle; Grassmann algebra fermionic coherent states; reciprocity principle; Grassmann algebra
►▼ Show Figures 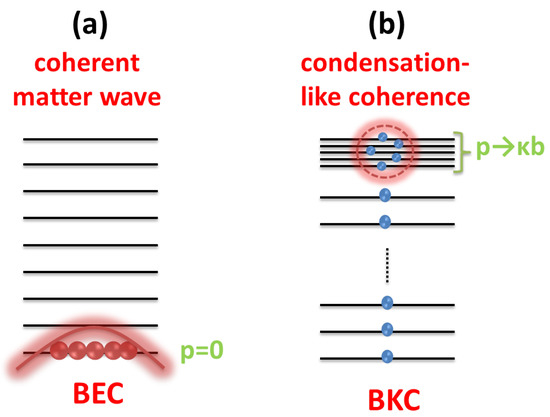