The Thermodynamical Arrow and the Historical Arrow; Are They Equivalent?

Following HPS, charged matter generates an asymptotic long-range EM field that can be interpreted as a soft charge. Black holes appear to encode the spatial information of these currents generating OAM beams in twisted hair implants that present a local a spatial structure on the event horizon. All EM information is encoded and determined by the long time dynamics of the charged matter, very far away from the interaction region, or away from the black hole event horizon, in the case of infall.
We have shown that we can use the spatial symmetries of EM fields to generate organized local spatial structures on soft photon implants and encode structured and densely organized information on the event horizon. In fact, when charges generating structured fields fall in the BH gravitational field, accounting for the gravitational memory effect, they are expected to generate organized structures of soft photons but result different from those of the “real” photons. It is noteworthy that the OAM content of the soft photon hair implant is characterized by its OAM state distribution peaked on a value higher than that of the real EM field emitted by the infalling currents.
BHs can have “curly”, twisted, structured EM soft-hair implants where information can be written onto the horizon in an organized way. This procedure can be extended to more complex field configurations expressed in terms of conserved quantities and symmetries with additional supertranslation fields.

Fabrizio Tamburini gratefully acknowledges the financial support from ZKM and MSC-BW. Mariafelicia De Laurentis is supported by ERC Synergy Grant “BlackHoleCam” Imaging the Event Horizon of Black Holes awarded by the ERC in 2013 (Grant No. 610058). All the authors acknowledge M.V. Licata for the help during the revision of the manuscript.

Fabrizio Tamburini, Mariafelicia De Laurentis, Ignazio Licata and Bo Thidé discussed the main idea; Fabrizio Tamburini performed the numerical simulations and developed the analytical method; All the authors contributed in the writing of the paper. 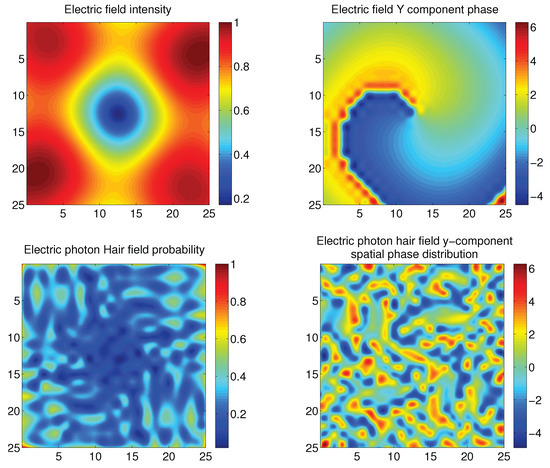