Is Turbulence a State of Maximum Energy Dissipation?

Turbulent flows are known to enhance turbulent transport. It has then even been suggested that turbulence is a state of maximum energy dissipation. In this paper, we re-examine critically this suggestion in light of several recent works around the Maximum Entropy Production principle (MEP) that has been used in several out-of-equilibrium systems. We provide a set of four different optimization principles, based on maximization of energy dissipation, entropy production, Kolmogorov–Sinai entropy and minimization of mixing time, and study the connection between these principles using simple out-of-equilibrium models describing mixing of a scalar quantity. We find that there is a chained-relationship between most probable stationary states of the system, and their ability to obey one of the four principles. This provides an empirical justification of the Maximum Entropy Production principle in this class of systems, including some turbulent flows, for special boundary conditions. Otherwise, we claim that the minimization of the mixing time would be a more appropriate principle. We stress that this principle might actually be limited to flows where symmetry or dynamics impose pure mixing of a quantity (like angular momentum, momentum or temperature). The claim that turbulence is a state of maximum energy dissipation, a quantity intimately related to entropy production, is therefore limited to special situations that nevertheless include classical systems such as shear flows, Rayleigh–Bénard convection and von Kármán flows, forced with constant velocity or temperature conditions. View Full-Text
Keywords: maximum entropy production; turbulence; Kolmogorov–Sinai entropy maximum entropy production; turbulence; Kolmogorov–Sinai entropy
►▼ Show Figures 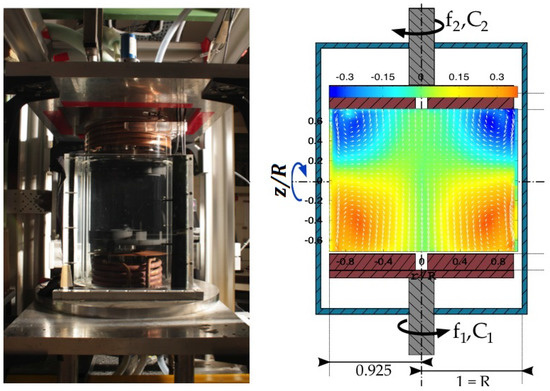