Quantum cryptography has been a main field of research in quantum information over the past twenty years. It employs fundamental theories in quantum mechanics to obtain unconditional security. With the rapid development of information technology and quantum physics, quantum cryptography has achieved many significant results.
Researchers have put forward many protocols to continuously improve the safety and efficiency of communication. One of the most famous is the first quantum key distribution (QKD) protocol (BB84 protocol), which was proposed by Bennett and Brassard in 1984 [1]. QKD is an important research direction in quantum cryptography, which is used to share a secret key in communication between the sender (Alice) and the receiver (Bob), afterwards they transfer information by utilizing the generated keys to encode and decode.
Unlike QKD’s need to distribute the key, a large number of protocols are used to transfer the secret information in the communication between the two sides directly, such as quantum secret sharing (QSS) [2,3,4,5,6], deterministic secure quantum communication (DSQC) [7,8,9,10], and quantum secure direct communication (QSDC) [11]. Since Alice and Bob will directly transfer effective information in the channel, the safety requirements of the protocol are higher than QKD. With the continuous study by researchers, there are many efficient QSDC protocols that have been presented in recent years, including protocols without using entanglement [12,13], and protocols using entanglement [14,15,16,17]. In addition, methods using two-way communication and quantum one-time pad are introduced to improve security [18,19,20,21,22].
In this paper, an improved quantum secure direct communication protocol, based on four-particle genuine entangled state (as shown in Equation (2)), is presented, aiming to improve communication security. In the protocol, the four-particle genuine entangled state is used to detect eavesdroppers, and quantum dense coding is used to encode the message. Finally, the security of the proposed protocol is discussed. We analyze the security of the protocol by comparing the relationship between the information that the eavesdroppers can obtain and the probability of being detected. The results showed that our scheme is feasible and secure.
For simplicity, we use the four-particle genuine entangled state protocol (FGEP) to represent the proposed protocol.

(i) Bob extracts all the first particles in these Bell states, and forms the sequence (the travel qubits) in order. The sequence is used to transmit a secure message. Then, the remaining particles in the Bell states form the sequence (the home qubits) in order.
(ii) Bob forms a sequence in order with the M pairs of four-particle genuine entangled states as decoy photons to detect eavesdropping. Note that the sequence includes 4 × M qubits.
(iii) Bob inserts to sequence randomly, forms a new sequence . Only Bob knows the position of these decoy photons. Then Bob stores particles and sends particles to Alice.
Figure 1 shows this process with concrete examples.

(2)
The detection of eavesdropping.

After Alice receives sequence , Bob tells her the position where the decoy photons are. Then, Alice extracts the decoy photons from sequence and performs four-particle genuine entangled state measurement. If there is no eavesdropper, her outcomes are all four-particle genuine entangled state, and they continue to execute the next step. Otherwise, the communication is interrupted, and the FGEP protocol switches to (1).

(3)
Alice encodes her secure message on remaining photons based on dense coding.

Alice extracts all the decoy photons from sequence and the remaining particles form the series of particles . According to the secure message she wants to transmit, Alice chooses one of the four unitary operations , , and for each of her particles to perform the unitary transformation on particles from the series of . Here, , , and are Equations (3)–(6). Then, Alice sends the particles to Bob.

(4)
Bob decodes the cipher text with the Bell measurement.

After receiving Alice’s particles, Bob performs the Bell measurement on both particles, and . Then, he can acquire Alice’s secure message.

3. The Security Analysis of the Protocol

Now, let us analyze the efficiency of the eavesdropping detection in the FGEP protocol. In order to gain the information that Alice encoded on the travel qubits, Eve, first, performs unitary attack operation on the composed system. Then, Alice takes a coding operation on the travel qubits. Eve finally performs a measurement on the composed system. Since Eve does not know which particles are used to detect eavesdropping, she can only perform the same attack operation on all the particles. With respect to Eve, the state of the travel qubits is indistinguishable from the complete mixture, thus, all the travel qubits are considered in either of the states or with equal probabilities .
Generally speaking, after performing attack operation , the states and become: where and are the pure ancillary states determined uniquely by . Since must be unitary, we can know , and , then we can get , [11].
First, suppose the obtained particles by Alice are , and Eva’s system can be described by . The corresponding density matrix of the system can be expressed as . With the orthogonal basis , the state ρ can be rewritten as:
Alice encodes her message by performing the unitary operations , , and with the probabilities , , and , and . After Alice’s encoding operation, the state ρ becomes :
According to the theory of Von-Neumann entropy, the maximal amount of information extracted from this state can be expressed as .
Because of the existence of a large number of particles, we can suppose . By solving the we can get the eigenvalues of that are:
Thus the maximal information can be rewritten.
Suppose , , , . From the front analysis, we can get , and . Thus, the maximal amount of information contained in qubit is expressed as
As above, the maximum amount of information contained in qubit is expressed as:
Assuming that the probability of , being sent by Alice is one half, respectively, finally, Eve can gain the maximal information .
The above analysis obtained the maximal information that Eve can obtain. Next, let us analyze the probability of Eve being detected. As Eve does not know which particles are the decoy photons, she performs the same attack operation on all particles. After Eve’s attack, the state of the decoy photons becomes .
When Alice received sequence , she extracts the decoy photons and performs the four-particle genuine entangled state measurement. Assuming the number of decoy photons equals to one, and the probability that Alice gets the four-particle genuine entangled state is the probability that the channel is safe. By solution formula we can get:
Due to , and , we get the following relations:
Thus, the probability that Eve can be detected can be expressed as:
From Equations (15) and (19), we can get the relationship between the maximal information that Eve can obtain and the probability that Eve can be detected. In order to observe the effect of the protocol, we compare the results of our protocol to Reference [23], which is one of the most famous QSDCs (Figure 2). As shown in Figure 2, the solid line expresses the effect in FGEP and the dotted line expresses the effect in Reference [23]. Obviously, if Eve wants to get the same amount of information, she must face a larger detection probability in FGEP. This can indicates that FGEP is secure. It is worth noting that this result is only in the case where equals one.
Then, we consider the case where is greater than one. In this case, the only chance that Eve gets the information and is not detected is if Alice measures each group of decoy photons and all are in the four-particle genuine entangled state. Thus, the probability that Eve can be detected can be expressed as:
We can see from Figure 3 that if the number of decoy photons increases, the result will be better. When is 10 and taken to 1.5, the detection probability is . This means that it is hard for Eve to get the information without being detected. 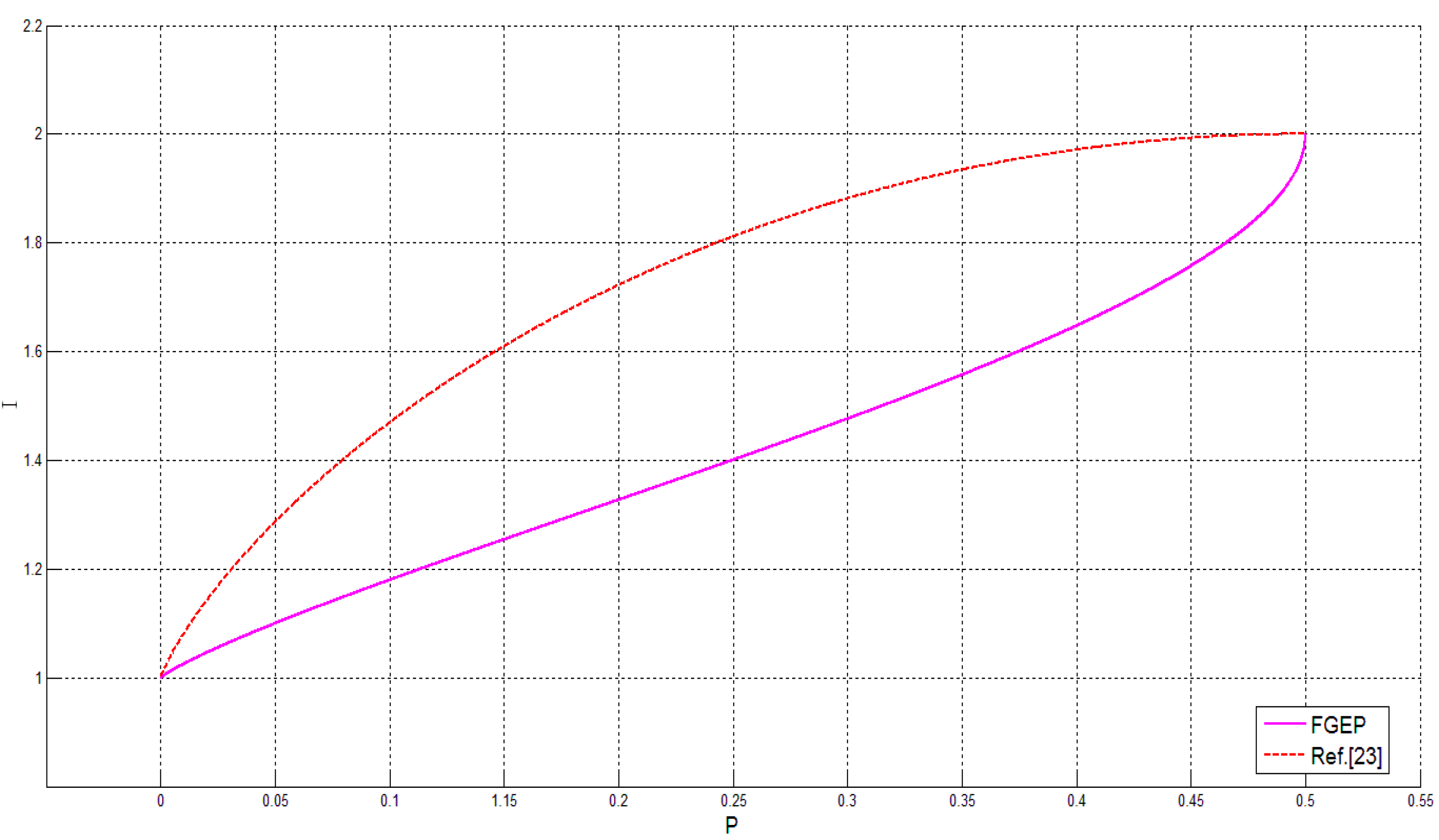 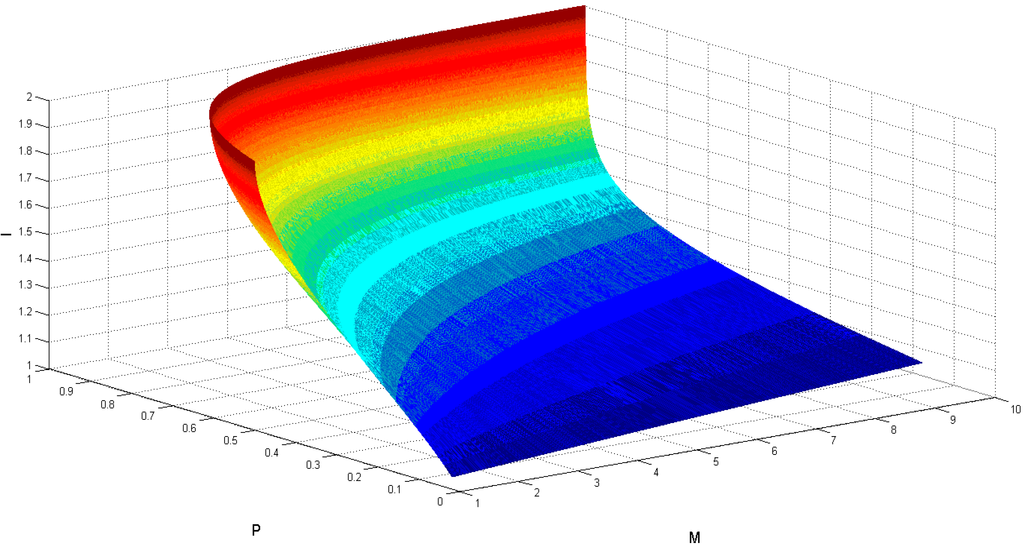 Compared to other quantum secure direct communication protocols, FGEP has the following differences:

(i)
The eavesdropping detection method using the four-particle genuine entangled state as decoy photons in the FGEP protocol is similar to the method using the control mode [23].
(ii)
In the FGEP protocol, the Bell states are prepared by Bob rather than by Alice. This guarantees that the home qubits could not leak to Eve, and the Bell states that carries the secure message can be reused.
(iii)
The FGEP protocol is based on the four-particle genuine entangled state, which can reduce the times of detection.

In summary, an eavesdropping detection strategy based on four-particle genuine entangled state in quantum direct communication protocol has been introduced, and the results are analyzed quantitatively by comparing the relationship between the information that the eavesdroppers can obtain and the probability of being detected.
In the analysis, if the eavesdropper obtains the same amount of information, she must face a larger detection probability in FGEP, which shows that the efficiency of eavesdropping detection in FGEP is relatively high. Through analysis we can also know that the security of our protocol will be greatly improved by increasing the number of decoy photons. In order to obtain enough security required for quantum secure direct communication, Bob only needs to increase by a small amount of decoy photons. This fully shows that our protocol is secure and feasible.