Learning from Complex Systems: On the Roles of Entropy and Fisher Information in Pairwise Isotropic Gaussian Markov Random Fields
Next Article in Special Issue

With the gradual reduction of the Earth’s resources, countries all over the world are becoming increasingly aware of the importance of exploiting space resources. The European Space Agency (ESA) has completed the Near-Infrared Spectrograph, which is contributing to the international James Webb Space Telescope (a space observatory set for launch on an Ariane 5 rocket in 2018). NASA’s Voyager 1 spacecraft has ventured into interstellar space. The probe is now about 19 billion kilometers from our sun. China is expected to launch its fifth lunar probe, Chang’e-5, in 2017 to send back a moon rock sample to Earth. The NO.1 High-Resolution satellite was launched in the first batch and is a component of the major China High-Resolution Earth Observation System (CHEOS) technical project. The target is to provide accurate service for sectors of land, environment and agriculture, etc.

In all these projects, observing images is an efficient way for the acquisition of space information. These images are always sent back to the ground for observation, but the data channels for space communication are always limited. The goal of image coding is to resolve the contradiction between the large amounts of high resolution images and the limited data channels. The wavelet-based coding technique is an important research direction in the field of image coding [1–3]. One of the key steps in the wavelet-based coding technique is rate control. For example, JPEG2000, which is an excellent currently used well-known coding algorithm, can control the bit rate accurately and conveniently by a post-coding rate-distortion optimization algorithm. Currently, a lot of research has been done on the rate control algorithms in JPEG2000 [4–6]. These algorithms consume large amounts of memory and computing time for the reason that most of the coding process must be performed in order to estimate the image distortion. Therefore, prediction of image quality (image distortion) before coding is very useful for the implementation of the image coding algorithms due to the reduction of the memory cost and the computing time. Saha analyzed the relationship between coding quality and image activity measure (IAM) at a fixed bit rate [7,8]. Li proposed a model to predict JPEG2000 image quality at high compression ratios (CR) which obtained desirable prediction accuracy, but required a compression ratio larger than 10:1 [9]. In remote sensing, the compression ratio is usually low for fear of large image distortion. However, when the compression ratio is low, it is always difficult to predict image coding quality accurately.

It is important to predict image coding quality before coding for the purpose of reducing the memory cost and the computing time. The relationship between the image coding performance and the image activity at fixed compression ratios was established in previous researches [7–9], and is given as follows:

in which α and β are the empirical parameters obtained by conducting different coding algorithms at different compression ratios. PSNR is commonly used to measure the image coding quality, and the calculation formula is in which I(i j) and Ĩ(i j) represent the original image and the decoded image, respectively. The calculation formulas of image activities [8,9] are where IAMD1 and IAME1 represent single pixel distance image activity and double pixel distance image activity. The schematic diagram of the image activities are shown in Figure 1.

in which α and β are functions related to the compression ratio.

In the second step, the differential information entropy is tested to see whether it is capable of measuring the coding performance of lossy coding. The JPEG2000 algorithm is taken as an example and the PSNR is utilized as a measurement for image coding performance. The wavelet base is Db 9/7, and the transform level of wavelet is 3. A database for 8 bit high resolution grey remote sensing images of size 1,024 × 512 is built. There are three kinds of images, which are urban, plain and farmland, separately. Both simple and complex images are included. The similar characteristics of the images may be reflected in the imaging mode, such as remote sensing. In other words, the parameters by data fitting in the paper may be more suitable for remote sensing applications. The proposed quality prediction method can be applicable to other kinds of images with some other suitable parameters. Then these images are coded at different compression ratios (the compression ratios varying from 4/1 to 12/1), and the PSNR values are calculated for the coded images with each compression ratio. There are two tests: (1) the relationship between D_Entropy and PSNR. By removing some images of similar image compression characteristic, 23 images are selected from the database and used for data fitting. The sum of squares due to error(SSE) and R-square are used to evaluate the data fitting results. (2) The prediction method. The 23 images are used to find the relationship among PSNR, D_Entropy and compression ratio. This relationship is used as an indicator to predict the image coding quality. Six images are randomly selected from the rest images in the database for the verification of the prediction. In the first test, D_Entropy and lnIAMD1 for each image are calculated. The experimental results are shown in Table 1.

Assuming that D_Entropy is linear with PSNR for the sake of convenience, that is PSNR = a * D_Entropy + b. Then data fitting is used to find the parameters a and b. The constraint for fitting is to minimize the mean error of all samples. For comparison, the relationship between PSNR and lnIAMD1 is also studied, which is PSNR = αlnIAMD1+β.

The assessment parameters include SSE and R-square. The former is to compute the square error sum of original data and fitting data, the formula of which is:

where yi and ŷi represent the original data and fitting data. The number of the original data is represented by n and wi are the weights. wi determine how much each value influences the final parameter estimates. Equation (6) indicates that good fittings have small SSE values.

R-square determines the fitting effect through the variation of data, the formula of which is:

Total sum of squares(SST) is the sum of the square of deviations from the original data (yi) and the average value(ȳi), the formula of which is:

R-square represents the square of the correlation between the real values and the predicted values. The more R-square is, the better fitting result will be. The experimental results are shown in Table 2 and Table 3.

From Table 2 and Table 3, it can be found that D_Entropy has smaller SSE and larger R-square than that in lnIAMD1 at various compression ratios. Hence, a conclusion can be made that D_Entropy has a better linear relationship with PSNR in the data fitting process.

4. The Relationship among PSNR, D_Entropy and Compression Ratio

Then the above relationship can be seen as a method to predict the image coding quality. In order to validate the effectiveness of the proposed method, six 8 bit 1,024 × 512 grey remote sensing images are tested. The images and the experimental results are shown in Figure 4 and Table 4, separately.

Finally, other coding algorithms (such as CCSDS [10], SPIHT [11] and EZW [12]) are implemented and tested. The following relationship is also assumed: PSNR = a / CR+b*D_Entropy+c. By data fitting of samples in Table 1, the results are shown in Table 5 and Table 8. Then the coding quality of the images in Figure 4 can be predicted and the prediction results are shown in Figure 5. The actual results and the predicted results for the coding quality of images in Figure 4 are represented by red line and blue line, separately. From the experimental results in Figure 5, it showed that the maximum prediction error is less than 2.5 dB and the average error is 1.12 dB. Therefore, a conclusion can be made that the proposed method is also efficient for some other coding algorithms. 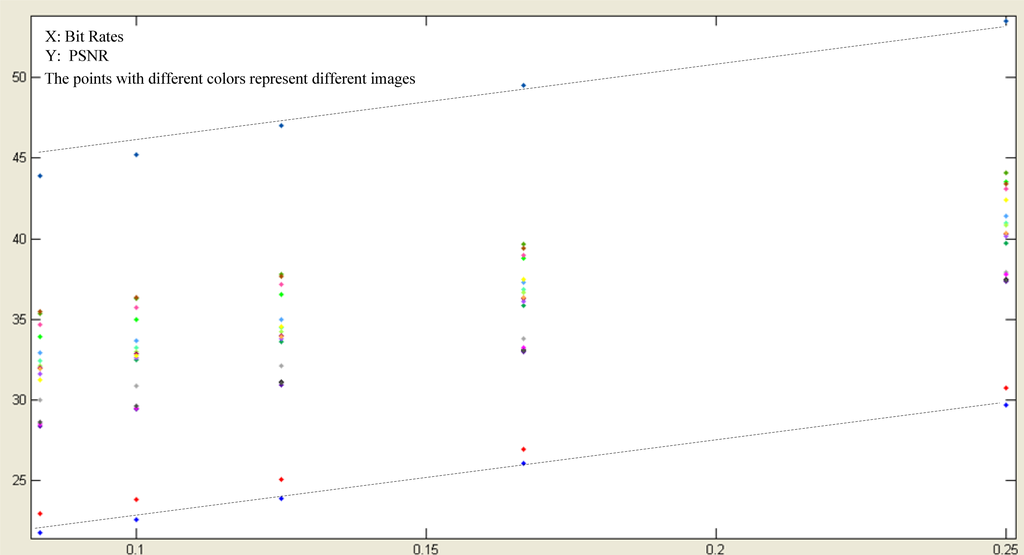 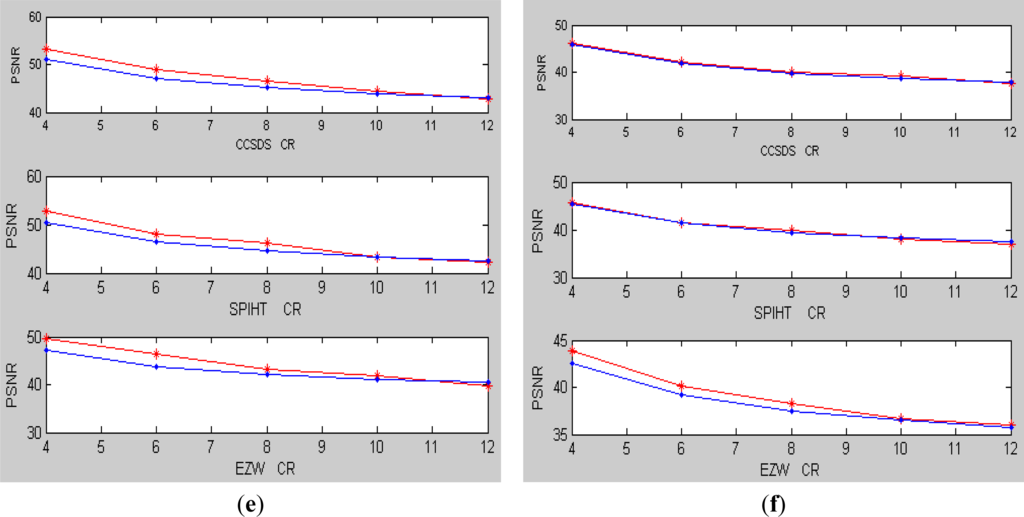 Table 2. The relationship between D_Entropy and PSNR.

Table 3. The relationship between lnIAMD1 and PSNR.

Table 5. The relationship between D_Entropy and PSNR for CCSDS algorithm (a = 0).

Table 6. The relationship between D_Entropy and PSNR for SPIHT algorithm (a = 0).

Table 7. The relationship between D_Entropy and PSNR for EZW algorithm (a = 0).

Table 8. The relationship among D_Entropy, PSNR and Compression Ratio (varying from 4 to 12).