Autocatalytic Sets and the Origin of Life

by Wim Hordijk 1, Jotun Hein 1 and

1. The Origin of Life

The origin of life (OoL) remains an elusive problem, although much progress has been made in recent years. Having gone from a problem considered ‘beyond science’ to ‘solvable in principle but maybe not in practice’, many researchers now believe it will be solved in the next few decades. In fact, there are currently several OoL scenarios, but all still have some difficulties and lacunae. Although often quite different in their details, one common element which most of these scenarios have is the appearance of an autocatalytic set or cycle at some stage.

All life as we know it depends on a delicate interplay between DNA and proteins. However, this DNA-protein machinery seems too complex to have arisen all at once. So there appears to be a “chicken-and-egg” problem: which came first, the chicken (protein, phenotype), or the egg (DNA, genotype)?
The most widely accepted resolution of this problem is that of an RNA world [1,2,3] preceding DNA and proteins, i.e., a collection of (self-)replicating RNA molecules, using template complementarity plus the ability to perform and catalyze their own (or each others) synthesis as a way of achieving reproduction and self-sustainability. The possibility of an RNA world has some experimental support, and is now generally considered to have been an important step in the origin of life [4,5]. However, an RNA world “spontaneously” generating proteins and DNA is not straightforward, and is certainly not (yet) proven beyond any doubt. Moreover, and perhaps more importantly, the initial appearance of an RNA world itself is still mostly an open question [2,3,6,7].

The idea of a “primordial soup” [8] spontaneously generating the basic building blocks for life sounded attractive after some initial experiments along these lines [9,10], but has been much debated since then and criticized as not being capable of creating these building blocks in sufficiently large concentrations. So, there must have been something more sustainable to get anything like an RNA world started.
A basic element underlying all metabolism (and therefore believed to be of very ancient origins) is the citric acid (or Krebs) cycle. This is a chemical reaction network involving a cyclic sequence of 11 substrates and reactions. It turns out that this cycle can (and does) also operate in reverse, known as the reductive citric acid cycle. In fact, in chemoautotrophs (such as eubacteria and archea), this (reverse) cycle “is the central starting point on the route to all biochemicals” [11].
Furthermore, even though most of the catalysis in this metabolic cycle is now performed by enzymes (proteins), it is claimed that many of them could initially have been performed by simple molecules (e.g., co-factors) that are likely to have been present on the early earth. And so, it is argued, the reductive citric acid cycle (or similar metabolic cycles) could very well have provided an intermediate step from prebiotic chemistry to organic molecules such as RNA [11,12,13,14]. This claim is still highly debated [15,16], but there is experimental evidence that suggests that simple (auto)catalytic reaction networks could indeed have produced the necessary building blocks for an RNA world [17,18].

Given the existence of an RNA world, some of these RNA molecules likely started encoding for and synthesizing small proteins. These newly created proteins, being much more efficient, would then have started to take over some of the catalysis required for RNA replication. This opened up the way for creating longer strands of RNA, which in turn enabled encoding for more complex proteins. Furthermore, with proteins, the synthesis and replication of DNA molecules became possible. DNA, being much more stable than RNA, is able to encode for an even larger number of proteins, eventually taking over the role of information carriers from RNA [3,6,19].
Arguably, some sort of self-sustaining or self- reinforcing cycle, such as a hypercycle [20,21,22] or Darwin-Eigen cycle [6,23] seems necessary for this RNA to DNA transition to succeed. Such cycles can be seen as special instances of autocatalytic sets in general. In fact, autocatalytic sets arising in a mixture of interacting chemicals which can be both substrates and/or catalysts, were originally proposed as an alternative solution to the “chicken-and-egg” problem [24,25,26,27,28].
A collectively autocatalytic set is a set of molecules and catalyzed reactions where each molecule is created by at least one reaction from this set, and each reaction is catalyzed by at least one molecule from the set. It has been claimed that in sufficiently complex chemical reaction systems, autocatalytic sets will arise almost inevitably [26,27]. This was later disputed [29] by pointing out that this requires an (unrealistic) exponential growth in catalytic activity with increasing system size. Despite this criticism, the original claim (including its disputed argument) still seems to persist [30]. However, there is evidence that simple autocatalytic sets can actually be constructed experimentally [31,32,33]. This evidence, together with our own results reviewed below, make it at least plausible that autocatalytic sets indeed played a role in the emergence of proteins and DNA from an RNA world [34].

1.4. A scenario for the origin of life

Summarizing the above story, a plausible scenario for the origin of life that is gaining more support recently is as follows [6,19,35,36]:
(In)organic chemistry ⇒ Prebiotic metabolism ⇒ RNA world ⇒ Proteins ⇒ DNA
None of these steps have (yet) been proven beyond any doubt, but as argued above, they are certainly possible and there is actual evidence (theoretical and/or experimental) to support them.

Autocatalytic cycles and sets seem to play an important role in more than one of the steps in the above OoL scenario, and are a necessary, although not sufficient, condition for life. Autocatalytic sets are defined more formally in [37] as follows. Given a network of catalyzed chemical reactions, a (sub)set of such reactions is called: The food set F contains molecules that are assumed to be freely available in the environment. Thus, an RAF set formally captures the notion of “catalytic closure”, i.e., a self-sustaining set supported by a steady supply of (simple) molecules from some food set. Note that this notion of an autocatytic set is slightly different from the (chemical) use of the term autocatalytic reaction in which some molecule directly catalyzes its own production. With an autocatalytic set we do not mean a set of autocatalytic reactions, but rather a set of (arbitrary) molecules and reactions which is “collectively autocatalytic” in the sense that all molecules help in producing each other (through mutual catalysis) in some closed and self-sustained manner (supported by a food set). Thus, autocatalytic cycles, hypercycles, and collectively autocatalytic sets can all be seen as particular instances of RAF sets. Figure 1 shows a simple example.
This formal RAF framework was introduced and analyzed (both theoretically and computationally) in our previous work [37,38,39]. In particular, we: 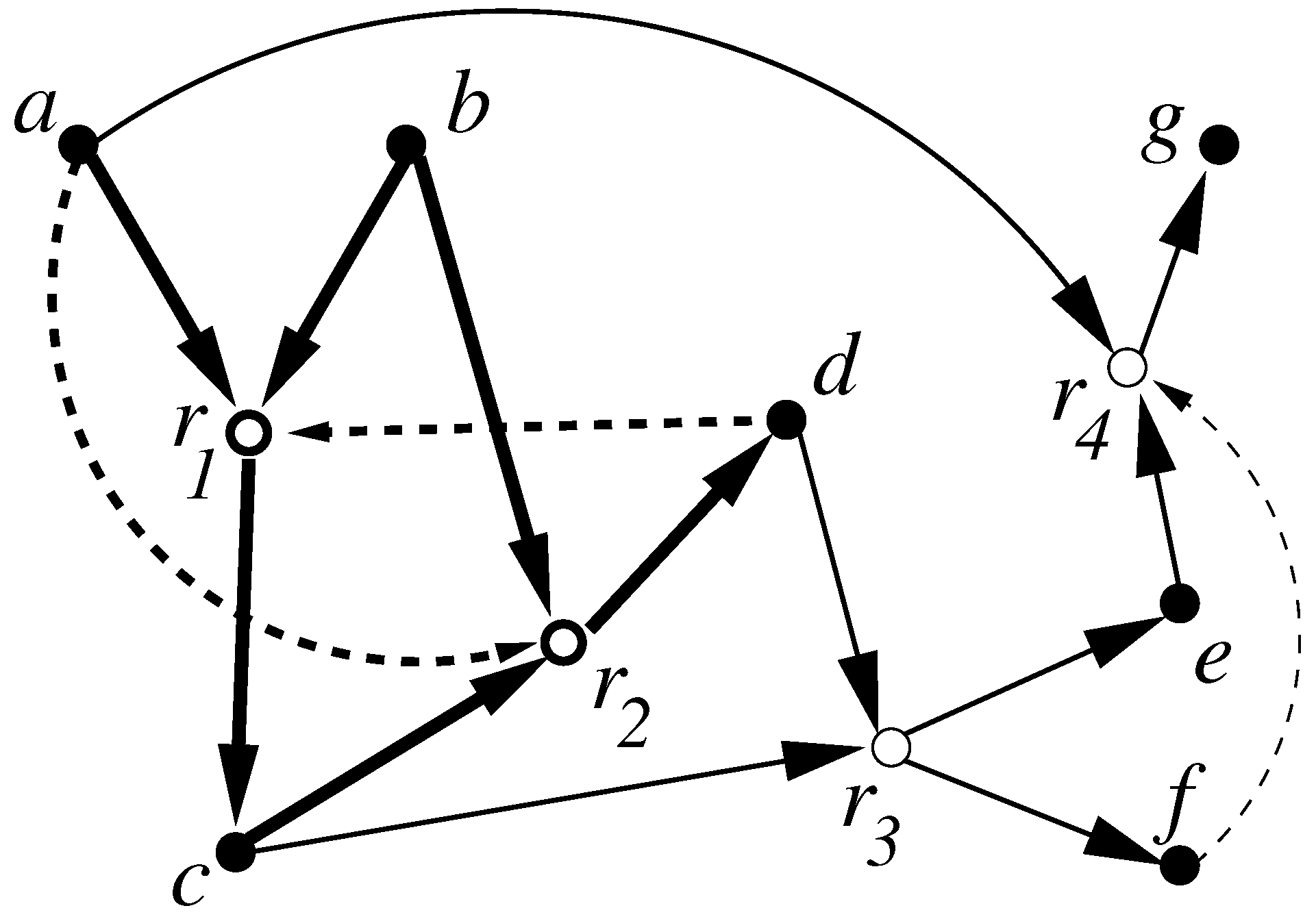 Next to the above basic three requirements in an RAF we can easily build in additional assumptions to incorporate greater biochemical realism and to exclude trivial situations. Some such assumptions are: Fortunately it is straightforward to add some of these constraints to the definition of an RAF without seriously affecting either the algorithm for finding an RAF, or the mathematical analysis. Indeed, regarding the first assumption, one can formally dispense with catalysis altogether by regarding each catalyst as both a reactant and a product of a reaction, and introducing a ‘dummy’ molecule that catalyzes all reactions. However we have found it useful to separate out catalysis explicitly for our mathematical analysis of catalytic reaction networks.
It is also possible to express the RAF model within other mathematical frameworks—in particular, it can be rephrased within the context of Petri nets, a model that Sharov has used to study self-reproducing systems in biology in an early paper [40] (see also [41]). The concept of an RAF also shares some similarities with Rosen’s category-theoretic approach to metabolic closure [42,43]. Other mathematically-based models of autocatalysis have been proposed in, e.g., [44,45,46].

3. Autocatalytic Sets and the Origin of Life

Autocatalytic sets (in various forms) appear to have played an important role in the origin of life. However, the likelihood of their “spontaneous” occurrence has been debated for a long time and has not been resolved so far, partly due to a lack of mathematical models that can be analyzed formally. We hope to have made an important contribution towards filling this gap by the introduction and formal analysis of a mathematical framework of autocatalytic (RAF) sets. This framework includes an efficient algorithm for finding RAF sets in general catalytic reaction systems, and has provided strong support for a high likelihood of their occurrence even with very moderate levels of catalysis. The RAF framework currently still requires more chemical realism, but it nonetheless provides a promising first step towards a more formal study of autocatalytic sets in general. The next steps would be (1) to include dynamics into the models in the form of reaction kinetics and the evolution of reaction sets (for example by using a genetic algorithm to evolve reaction sets [57]), and (2) to use the RAF framework to analyze real (bio)chemical networks as discussed above (e.g., the Beilstein database and bacterial metabolic networks). For a different but somewhat related (topological) approach to formally analyzing the appearance of structure and organization in chemical reaction systems, see e.g., [58]. We expect that such formal models and analyses will eventually shed more light on the possibility and plausibility of the various origin of life scenarios, and that they will also be helpful in actually constructing autocatalytic sets experimentally.

We thank the two anonymous referees for their helpful comments. The third author thanks the Royal Society of New Zealand for funding under its James Cook Fellowship scheme.

© 2010 by the authors; licensee MDPI, Basel, Switzerland. This article is an Open Access article distributed under the terms and conditions of the Creative Commons Attribution license http://creativecommons.org/licenses/by/3.0/.