Role of Artificial Neural Networks Techniques in Development of Market Intelligence: A Study of Sentiment Analysis of eWOM of a Women’s Clothing Company
Previous Article in Special Issue

International Trade in the High-Tech Sector—Support or Obstacle to Start-Up Processes at the Macro Level in European Union Countries?

2. Internationalization of High-Tech Sector and Its Effect on Start-Up Process—Theoretical Discussion

2.1. High-Tech Sector and Its Internationalization—Theoretical Insights of Its Importance

2.2. Internationalization of the High Tech Industry as an Entrepreneurial Ecosystem Shaping the Start-Up Process

The APC was funded by Poznan University of Economics and Business, Poland.

Data used in the paper based on Eurostat (publicly archived dataset of the European Statistical Office) and their online source. 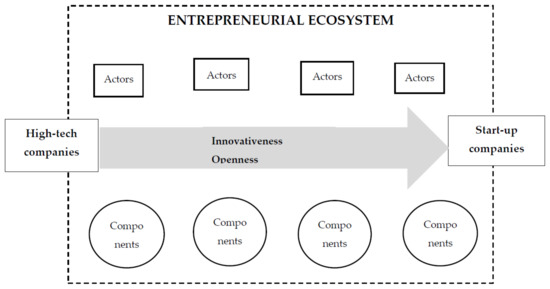