Chloroquine, widely used as a malaria drug, exhibits many therapeutic mechanisms of action, including immunostimulatory effects, that may be beneficial in treating various diseases [1]. For example, chloroquine can block endocytosis, interrupt autophagy, and modulate antitumor immune responses [2,3,4]. However, some patients who receive chloroquine (or its derivative hydroxychloroquine) exhibit adverse side effects, such as cardiotoxicity and retinopathy [5].
To mitigate some of these side effects, nanomedicine may provide potential solutions by using liposomes as drug carriers to take advantage of their associated pharmacokinetics and pharmacodynamics [6]. Liposome formulations have been developed for various applications, including vaccines, diagnostic imaging, and gene therapy [7,8,9,10,11]. Here, we report on the fabrication and characterization of liposomes encapsulating chloroquine.
Previous reports demonstrated the feasibility of encapsulating chloroquine within liposomes for malaria and cancer treatment. However, these reports rely on combinations of involved procedures for liposome fabrication, such as transmembrane pH-gradients, probe tip sonication, dialysis, and ultracentrifugation [12,13,14]. Furthermore, chloroquine liposomes have been shown to act upon immune cells therapeutically, but the acute cytotoxicity in macrophages has not been fully assessed and systematically compared to free chloroquine [15]. We report here a robust extrusion procedure for efficiently synthesizing chloroquine encapsulating liposomes with diameters of ~100 nm and further evaluate drug release kinetics and acute cytotoxicity in model macrophages.

A protocol for the efficient synthesis of chloroquine-encapsulating liposomes is presented. The liposomes exhibited a narrow size distribution, uniform unilamellar structure, and near-neutral zeta potential. Our in vitro data obtained in cell culture using RAW264.7 macrophages as model cells demonstrated that chloroquine liposomes exhibit superior cell viability levels compared to free chloroquine administered at equivalent drug concentrations. As a potential mechanism, we confirmed that liposomes release encapsulated chloroquine slowly and controlled over time. Such slow and controlled delayed release may be beneficial for safer in vivo applications of chloroquine in nanomedicine.

The following supporting information can be downloaded at: https://www.mdpi.com/article/10.3390/micro3010005/s1, Figure S1: Molecular Structures of Chloroquine Liposome Components: (A) Methoxy-PEG2kDa-DSPE; (B) DSPC; (C) Cholesterol; (D) Chloroquine diphosphate; Figure S2: Dynamic light scattering characterization of liposomes with (A) and without (B) chloroquine encapsulation. Zeta potential measurements of liposomes with (C) and without (D) chloroquine encapsulation; Figure S3: UV-Vis spectrum of 50-µM chloroquine from 400-300 nm where λmax is 343 nm; Figure S4: Cell viability in RAW264.7 macrophages plotted against the log of free chloroquine concentrations. The logIC50 was determined by GraphPad Prism to be ~ 1.756, yielding an IC50 of ~57.0 µM for free chloroquine. Data points represent mean +/- SD (n = 5); Figure S5: Fluorescence intensity signals from (A) free chloroquine incubated at 37 °C; red: in 10% FBS; blue: in 1xPBS; (B) liposomes without chloroquine incubated at 37 °C; red: in 10% FBS; blue as a function of time. Data points represent mean +/- SD (n = 3).

Data are available from the corresponding author upon request. 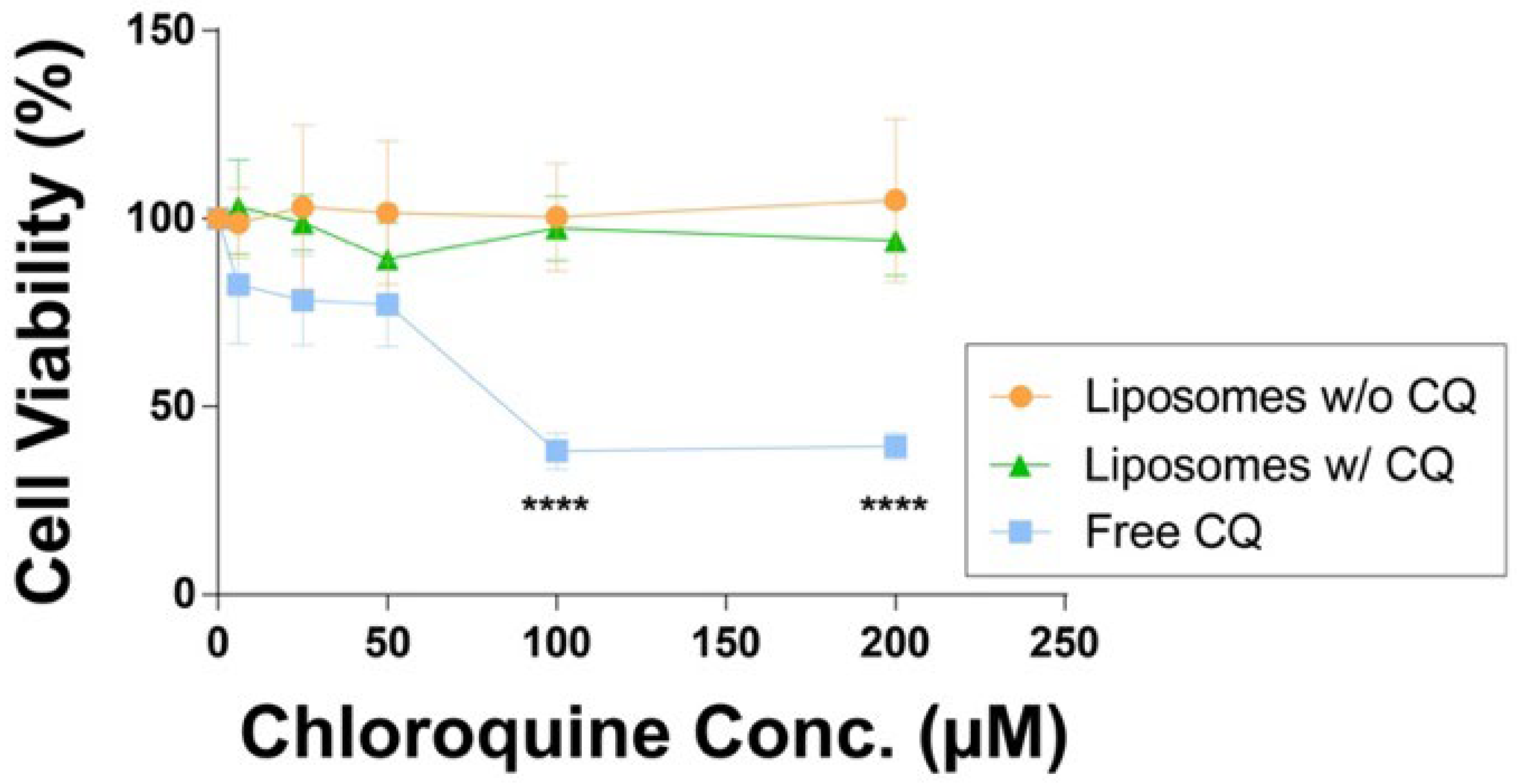 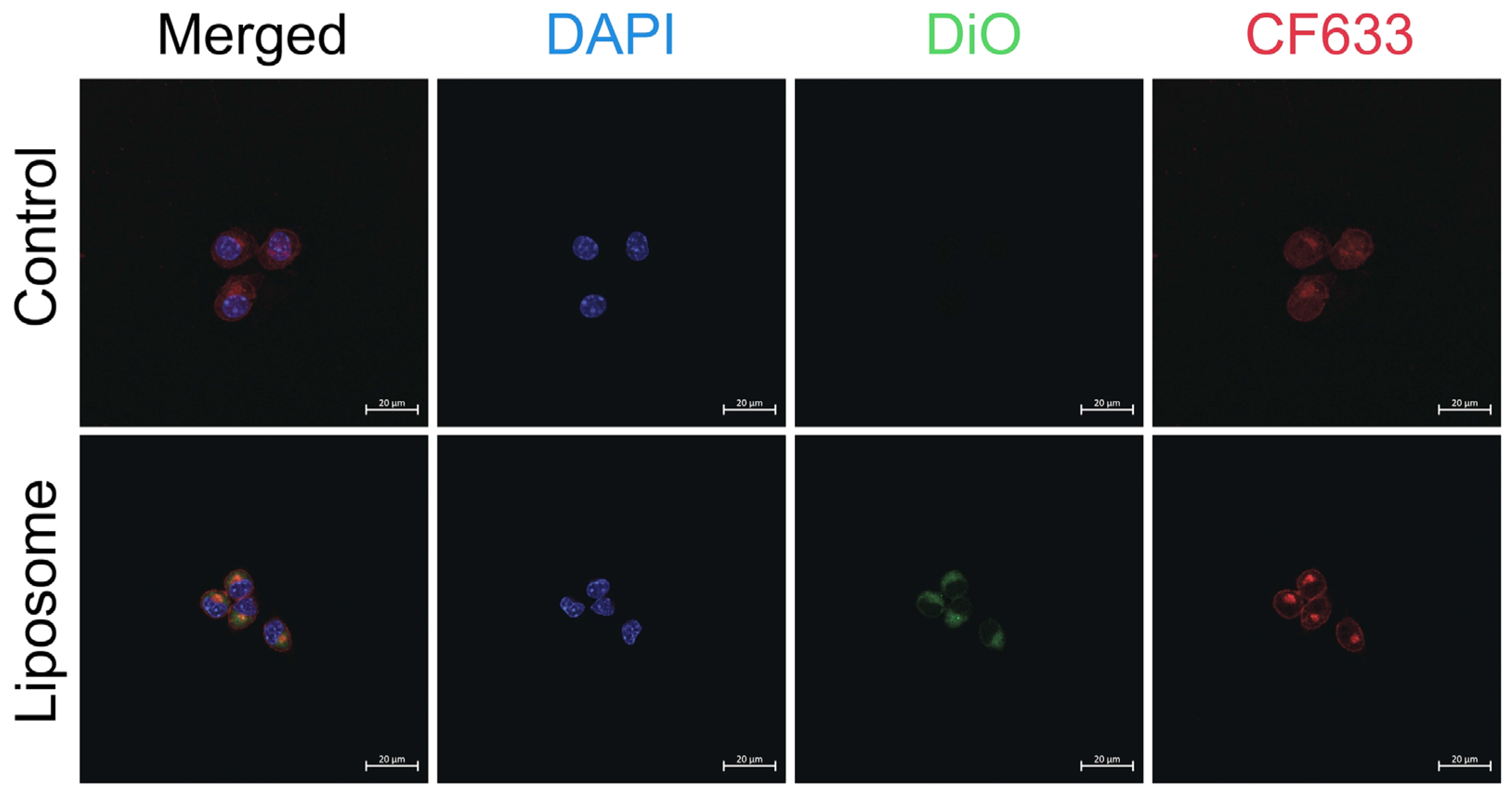 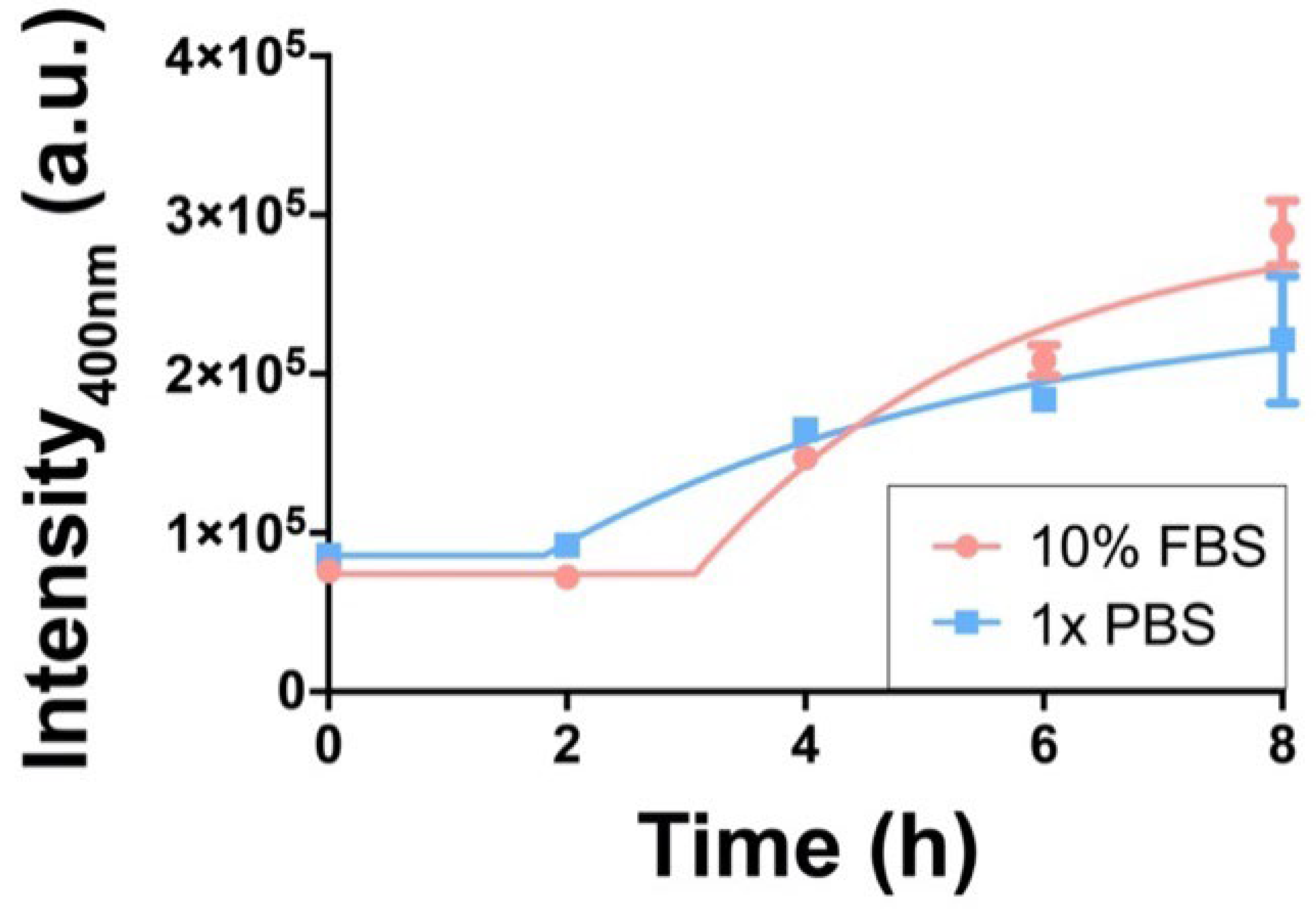